Following the Chocolate in Paris

There are many ways to experience Paris, but one of the more decadent ones is, simply, to follow the chocolate. Yesterday, I had the pleasure of doing just that when I tagged along on Context Tour’s “Chocolate Walk,” a chocoholic’s dream that took me to many of the Left Bank’s most delicious (and gastronomically prestigious) addresses.

We began the tour in front of the Saint-Germain-des-Prés church, where our docent, Camille Labro, pulled an actual cocoa pod (which she had recently brought from Brazil) out of her handbag and gave us a quick rundown on the plant’s important role in world history.  Over the next few hours, we would learn the ins-and-outs of chocolate production and consumption, from its historical roots in South America to its modern incarnations in Paris and throughout the world.

Labro, a food writer whose career has taken her from Berkeley to Provence to New York to Paris, is one of the four docents who lead Context’s “Chocolate Walk.” And while her route was well mapped out, she assured us, “all of my tours are customized.” True to her word, she allowed plenty of time for us to follow our individual gastronomical and cultural whims, whether that meant lingering over a truffle or taking a moment to marvel at a row of smoked Spanish hams in a nearby shop window.

Our first stop was Debauve & Gallais, a maison de chocolat founded in 1800, which claims to have been the chosen chocolate supplier of various French kings.

Upon entering the shop, housed in an old pharmacy, we could not resist their famous pistoles, chocolate coins crafted in remembrance of Marie Antoinette. We sampled a variety of flavors, most memorable of which was the chocolat de santé, or “health chocolate,” whose cocoa content was 99%. Though not easy on the taste buds, this particular pistole certainly conveyed the essence of unadulterated cocoa. 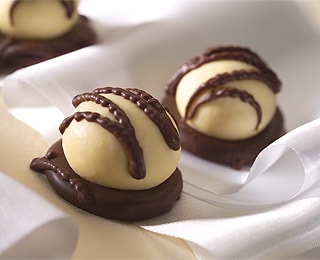 Our second stop was the sensational Pascal Caffet on rue Jacob. After tasting their Caramel Poire, caramel and pear liqueur surrounded by 70% Venezuelan dark chocolate, I quickly understood why this chocolatier has been distinguished as a “Meilleur Ouvrier de France”—a title bestowed upon food producers who uphold the highest standards in gastronomic quality and integrity.

From here, we made our way down the winding streets of the 6th arrondissement, dodging in and out of shops to taste and gawk to our hearts’ delight.

No chocolate tour would be complete without a sampling of the famous French macarons, the preferred dessert of many French royals (long before they became favorites of hungry tourists). We hit up the elegant Ladurée to sample classic flavors—chocolate, salted caramel, rose-infused—and later made our way to the much-loved Pierre Hermé boutique to taste macarons with a modern twist. So, who makes the best macaron? The debate rages on. We will have to continue researching.

Our final stop was the sleek shop of Belgian chocolatier Pierre Marcolini, whose address on the Rue de Seine felt more like an haute-couture clothing boutique than it did a chocolate house. Elegantly displayed in glass cases, his products evoke high art—though their visual appeal should not stop you from devouring them with abandon.

After a few hours of chocolate touring, I had expected to feel—at best—lethargic and—at worst—fatally ill.  On the contrary, I am now completely convinced of the cocoa plant’s much lauded benefits: mood elevation, anti-oxidizing powers, anti-bacterial effects, and all around magic. At the conclusion of the tour, I was left with the feeling that all was right in the world. An afternoon of chocolate will do that to you.

The approx. 3-hour walk takes place in the 6th arrondissement. Prices are 90€/person or 410€ for a private tour. Tours are limited to 6 guests.

The Chocolate Walk is just one of the many themed tours offered by Context Travel, whose docents are experts in various fields including art, architecture, history, theology, cuisine, shopping, and lifestyle.

For more information on Context’s Parisian tours, you can visit their website at: http://www.contexttravel.com/paris/.

10 comments on “Following the Chocolate in Paris”

I fell in love with Paris at age 12 while visiting my dad who lived in Belgium and I just recently went back in 2009 while studying abroad in Spain. If I wasn’t home sick for Paris already, you just made me that much more eager to get back there! I am planning to live in Paris for the summer if you have any tips for me, I greatly enjoyed this blog and your writing style!

Hi Lauren! Thanks so much for your comment. You’re bound to have a wonderful summer in Paris, and we hope you keep checking our blog for tips! The recommended blogs on our blog roll are also great resources. Tory

Tory, you really are a good writer! The tour sounds fantastic.. 🙂

Glad to see you enjoyed the tour!

All I can think about now is how to find real Macarons in NYC…. not an easy feat! Thanks Tory, you really conveyed the deliciousness of your afternoon!!

Decadent! On one of my recent trips to Paris, I happened upon another Meilleur Ouvrier de France Chocolatier in the area, Patrick Roger. Even just the simple chocolate bar I picked up (I think maybe 72%) was memorable.