Your Boyfriend’s Guide to Paris 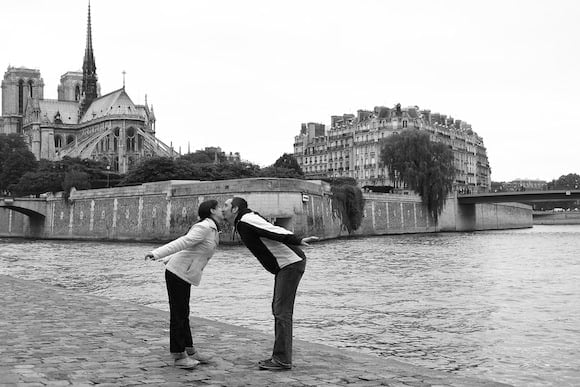 We’ll be the first to admit it: Paris is girly. It takes a strong man to admit he loves this city. But the good news is, such men exist! In fact, they’re everywhere, and they seem to be enjoying themselves. So we thought we’d dig a little deeper to find out what makes the Parisian man (or the Paris-going man) tick.

In researching this post, I polled a few of my Paris-savvy guy friends about what they love about the city, and across the board, the answer was pretty much the same: the women. Fair enough. Guys who like to gawk in a consequence-free environment would do well to position themselves at just about any café, and enjoy the show.

But if you’re traveling to Paris with your boyfriend or husband, then ogling ladies is probably not an activity you’ll want to encourage. If your man is docile and cooperative (go you!), he’ll let you drag him from store to store, from romantic park benches to cafés to the opera without complaint. But if he feels that certain stops on your agenda are a threat to his manhood, allow him to reassert himself by making the following detours. 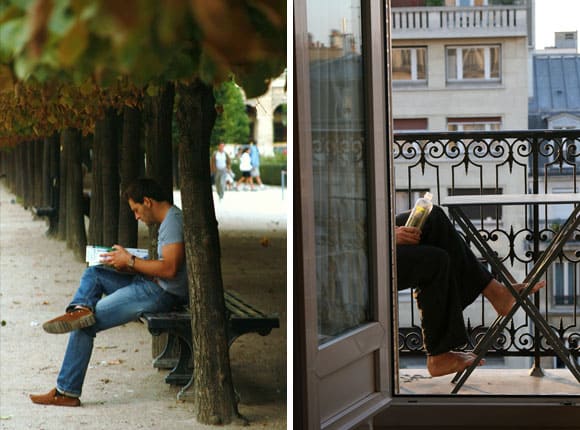 CARS! If you happen to be in Paris from October 2-17, swing by the biennial Paris Motor Show (one of the auto industry’s biggest events) at Porte de Versailles and check out the latest concept cars alongside luxury models and vintage makes.

GADGETS! This one’s a win-win: Head to concept store Colette. While you’re checking out the women’s fashion upstairs, your other half can play with the tech-y toys downstairs, listen to new albums and browse the super-cool sneaker selection.

MEAT! Check out our rundown of guy-friendly, meat-heavy restaurants in Paris that will sate even the manliest appetite. 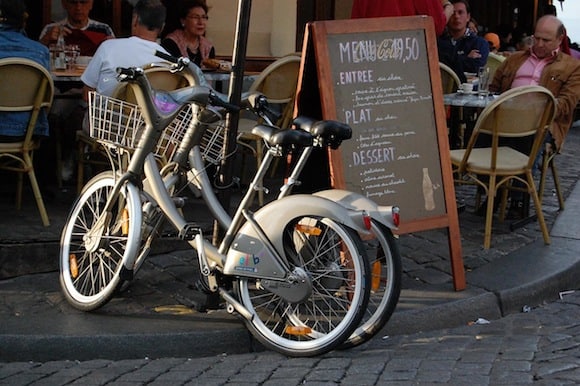 SPORTS! BEER! There comes a time when men need to slip off to watch “the game.” I never seem to know what game (or sport) they’re talking about, but they have a way of sussing it out, no matter where they are. For these moments, Paris is chock-full of anglophone pubs that all seem to broadcast “the game” (be it World Cup, rugby, American football or baskbetball). Take your pick: the Auld Alliance or the Moose. Warning: your significant other will inevitably meet other guys at these pubs who will tip him off to other upcoming games and places to drink beer and stare at screens and, generally, be manly.

MUSIC! Jazz is usually a gender-neutral crowd-pleaser, and luckily, Paris has a serious jazz habit that dates back to, well, the Jazz Age (the 1920s). The Caveau de la Huchette is steeped in tradition, but you can check out a more extensive list of venues here.

STYLE! If your man is a bit of a dandy, swing by the ever-elegant Charvet, which has been outfitting Paris’ best-dressed men since 1838 and is considered by many to be the best shirt-maker in the world. In addition to custom shirts, the shop is also a great place to stock up on ties, suits and fancy pajamas.

PHYSICAL EXERTION! For some reason, all my guy friends have a thing for the Arc de Triomphe. While the Eiffel Tower is for kids and novices, there’s something about ascending the Arc that feeds a man’s need for cultural conquest. Just go with it. 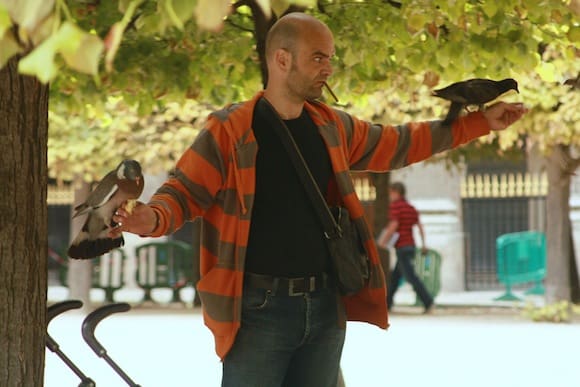 Melanie-m – If your boyfriend starts doing this, it might be time to give him a break and go home.

If all else fails, buy yourself some lingerie and come up with your own agenda. Try as they might to resist, Paris has a way of winning over even the manliest of men.

Written by Tory Hoen for the Hip Paris Blog. For our amazing rentals in Paris, Provence & Tuscany check out our website Haven in Paris.

15 comments on “Your Boyfriend’s Guide to Paris”

My son and I are traveling to Paris at the end of july. Even though its not the competitive season, we were hoping for to attend any ‘friendly matches’ while visiting. can anyone help? sites? advice? where to find schedule/book tickets?
thanks in advance
– manly paris

Hi Frank! Thanks for your comment. Of course, this post is meant to be quite tongue-in-cheek. It’s true though, that we rarely hear from our male readers! We’d love to get more feedback on what Paris-going guys are most interested in. Any ideas to get the ball rolling? Tory

It’s kind of sad that the vista of the male sex you have in mind (or that you think your readers have in mind) is not able to take into account that men might actually appreciate the beauty that you see in Paris. Sports, beers, gadgets, cars… yikes how stilted and backward your view is of men. Fred Flintstone perhaps. And he has to be a dandy to have a bit of style?? Perhaps you ain’t as hip as your blog suggests.

FABuLOUS photos!!! I’ve got to get back to painting Paris… j’adore it!

GREAT list! My Italian francophile is up for nearly all of the above 🙂 Most of all though, he’s happy sitting on the Seine reading a book in the late afternoon sun.

I loved light-hearted post “Your Boyfriend’s guide to Paris”.

Go for a Parisian man, he has to love the city!

Hi All! Thanks for your comments. Sunny, good call about Hemingway’s affinity for Paris. All of us who love the city know that there’s no end to the fulfilling discoveries to be made there – regardless of gender. But at Hip Paris, we find that our female readers tend to “swoon” more openly about the city. Why do you think that is?

Wow this article makes no sense to me. How are gallery-going, architecture-ogling, terasse drinking, photography obsessing, restaurant-going, Velib-riding and history-buffing in any way a gendered thing, let alone unmanly. It was Hemmingway’s town after all.

This sexist twaddle might fly with the giggling hordes of ditzes that think Lauduree and Pierre Herme are the Pantheons of city but I believe that most women have no problem hanging with their dudes in the most inspiring city in the world.

Also, Since when do women not care about “the game”?

i’m also a guy that loves paris. my favorite part? sitting down and watching. you can sit on a park bench. sit at a cafe. it’s such a relaxing city to me. you can just sit with an espresso and take it in.

Paris is such a romantic city great for couples! Glad your men enjoy it Candice and Victoria!! 🙂

I meant to say sitting by the water in the Luxembourg Gardens, but Victoria’s mention of the Tuileries got me all confused 🙂
But really what does the location matter, as long as it is in Paris?

My man was a long time Paris fanatic before he ever met me and he introduced me to the lovely place that I know obsesses about moving to.
We are constantly talking about being that “old couple sitting by the water in the Tuileries” or “sitting in that cafe in the Marais and just watching ” for hours.. which doesn’t mean you have to be young or old … just that Paris entertains without you having to do much .. just sit and let it happen.

Maybe I’m just lucky, but my man LOVED Paris and was content to sit in the Tuileries with me for hours, eating ice cream and watching the world go by. That being said, I’m bookmarking this for the recommended sports bars. It was easy to see World Cup games this past summer, but not so easy to find scores for the NBA finals. That was his only complaint 🙂

Thanks for the recs!