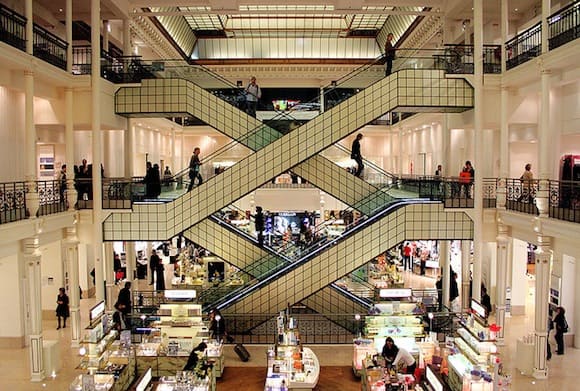 I had recently moved to Paris from San Francisco with my fiance. We were planning our wedding at a chateau in Burgundy and I quickly realized that I needed clothes – lots and lots of new clothes. With family and friends flying thousands of miles to join us, I was determined to show off the new Parisian me. 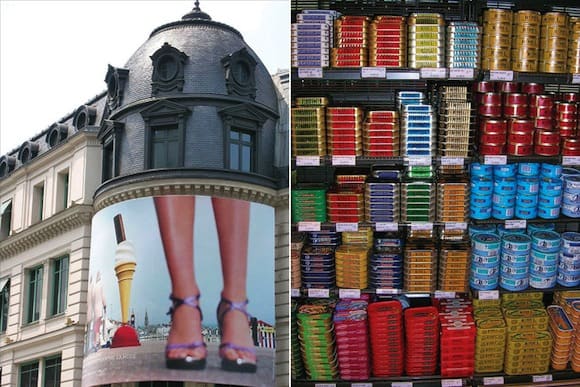 At Le Bon Marché, I discovered my inner Parisienne and began a love affair with brands like Vanessa Bruno and Paul and Joe. The shoe salon…the bags…the lingerie! It was a dream-come-true for a bride-to-be.

And ten years later, it still is. We left Paris after three life- and wardrobe-changing years. Now we’re back – hopefully for good – with two kids in tow and a Left Bank apartment to furnish.  Paris life is certainly different now, but one thing hasn’t changed: there are still plenty of reasons to love Le Bon Marché. Here are my top 5: 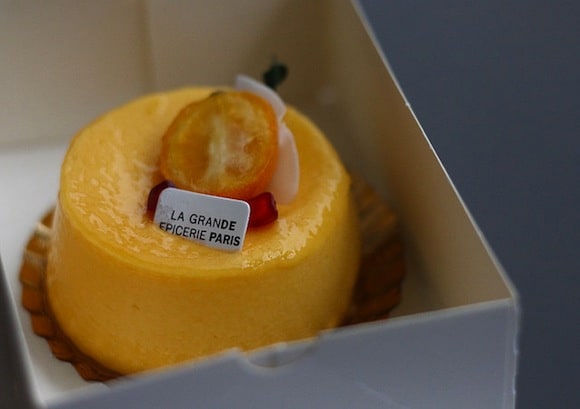 1. La Grande Epicerie de Paris: Imagine 30,000 gourmet products from around the globe culled in one expansive, well-lit space: A patisserie case containing a rainbow of macarons, chocolate truffles and sugar dusted tartes aux fruits made on-site; Pique-nique perfect dishes waiting to be ferried to the banks of the Seine; That dream gift for a foodie back home, like foie gras or truffle salt from La Maison de la Truffe. Still have shopping or museum-hopping on the day’s agenda? They’ll even deliver to your flat (for a fee.) 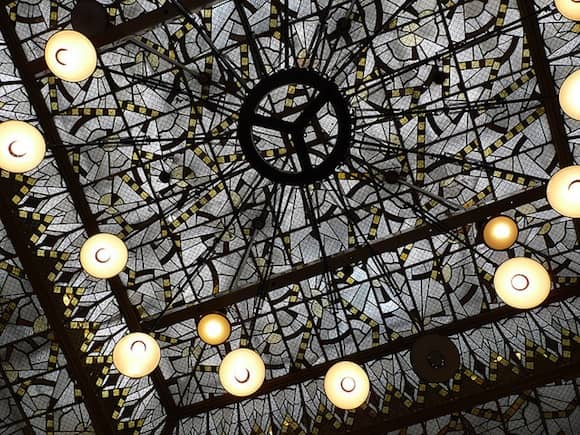 2. La Maison d’Edition: With a limited budget to furnish my apartment, LBM’s home design space provided ample inspiration. I fell hard for a David Weeks floor lamp (Didn’t I see something similar at Ikea?). A silky gray rug (perfect for our salon) would go on the wish list. Buying serious pieces here is a bit out of reach but with floor displays like art installations, you’ll leave ready to beautify your abode.

3. Le Theatre de la Beaute: The French are serious when it comes to scent. They even have a word for its lingering fragrance trail, le sillage. For most Parisiennes, a signature scent is de rigeur. I found mine, “Olene” by Diptyque, at the second floor boutique. Looking for yours? Hit Le Theatre de la Beaute on the rez-de-chaussee to see how Annick Goutal’s new “Le Mimosa” stacks up against cult-favorite “Geranium Bourbon” by London perfumer Miller Harris. The Culture of Color of Nail Bar offers a quick poses de vernis (polish change). At just 5 euro, it’s the chicest bargain in the store. 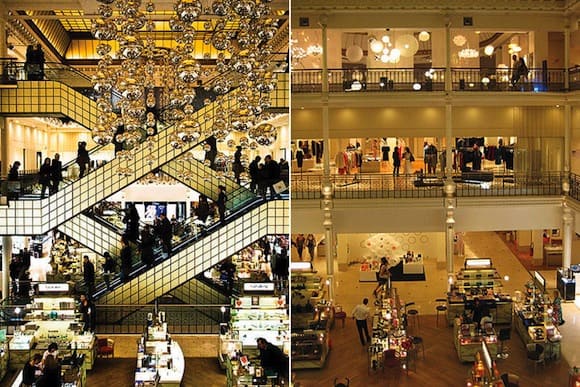 4. The history: Though its doors first opened in 1838 (the world’s first department store), the look of Le Bon Marché today bears the imprimatur of LVMH’s Bernard Arnault who bought it in 1984. Enter Andree Putman, France’s doyenne of design, to reconfigure its trademark escalators domed by Gustave Eiffel’s classic glass roof. The vast inner coeur (best viewed from the 2nd floor balcony) is itself worth the trip.

5. La mode: Le Bon Marché knows its client. She’s in her 30’s, visits the store about once a week and has plenty of euros tucked in her Vuitton Speedy. She’s the quintessential Parisienne who updates her wardrobe with key seasonal splurges rather than head-to-toe designer looks (sacrebleu!). She sports a mix from both sides of the store – Lanvin and Celine from the premiere etage and Isabel Marant, Maje and A.P.C. from across the covered passage, above La Grande Ep. She’s not me exactly, but hey, one can dream. 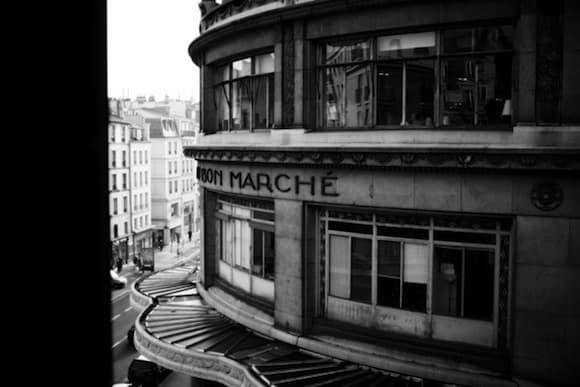 Despite it’s name (literally, “The Good Deal”) Le Bon Marché is anything but. Its air of pretension can be off-putting, but just remember: it’s all part of a carefully cultivated image. So mark your calendar for Wednesday, June 22: opening day of the summer sales. Prices across the store will be slashed up to 40 percent. Bargains at Le Bon Marché – what’s not to love?

Written by Paige Bradley Frost for the HiP Paris Blog. Looking for a fabulous vacation rental in Paris, Provence, or Tuscany? Check out Haven in Paris.

J’adore Bon Marche. I’ll be able to have a good snorkel around very, very soon. Am off to live in Paris for a year or so from 1 April this year and can’t wait!!!!!!!!!! A bientot.

I couldn’t agree more! Le Bon Marche was my first experience with Parisian shopping and I still can’t find a food hall that matches the Grande Epicerie.

Thanks for your comment Tara! I love nothing more than spending time lost amongst the amazing items at the Grande Epicerie! It’s my favorite place to find gifts for my friends back in the States. – Ariel

Yes, the shopping experience is pretty luxe – both at the Grande Epicerie and the main store. And I agree that it’s a bit like Harrod’s. I love how well-edited the selection is. You won’t find everything under the sun – just the best things! And don’t forget: Summer sales started today…

Oh this looks great! kind of reminds me of Harrods in London.

a few years ago, my study abroad class stayed at St. John’s, right across the street! By far, one of my favorite places in Paris. Such a treat to go to le Grande Epicerie for wine and cheese… truly a delightful place. makes coming home to the US and grocery shopping MUCH more difficult. The Bon Marche was a great escape, very attentive staffing that makes the shopping experience so enjoyable. Love this place.

Yes, the prices can be high but it’s still possible to find affordable gems! How about perfumed guest soaps or even LBM’s signature scents (in the Parfums d’Auteurs section of Le Theatre de la Beaute. You won’t find these anywhere else!) Happy shopping.

Lovely! I did some “damage” in Galeries Lafayette last time I was in Paris (I misread the sign about which cashmere sweaters were actually on sale…oops). You’ve inspired me to save my pennies to splurge at Le Bon Marche next time!

What a great, vibrant piece! I’m with Dickie; when is the next flight to Paris???!! It’s been a while since I visited Bon Marche, but with the sale at 40% off it might be worth it to jet right over there.

This makes me want to catch the next flight to Paris and spend the day wandering around Le Bon Marche! How about the cheese and wine section? To die for. I could LIVE there. Great article!

Artistically beautiful place plus the history. A very nice place to visit. I got a plane ticket! 🙂

Sounds like my kind of place! (After I win the lottery, of course).

I’ll start saving my pennies for a shopping trip when we’re in Paris this summer!

It is so architecturally beautiful…a must-see (and my favorite)!

I know! It wasn’t easy to select my “top five” because there are so many reasons to love it. If you haven’t been in awhile, the rotating art installations are great, too (down on niveau -1 and also on the 1ere etage). Cheers!

IF I needed any more reasons to love Paris, I would have to agree, Bon Marche is a good reason 🙂