Answering the Inevitable: “So, Are You Totally Fluent in French Now?” 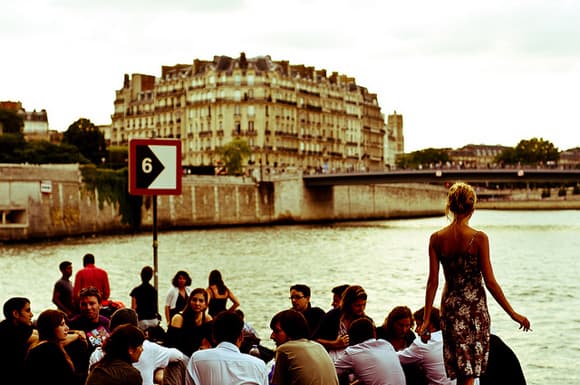 When I moved back to New York from Paris, I began to notice a trend. When people learned that I had lived in Paris, their first question (once they’d finished gasping with joy) was almost always: “So, are you totally fluent in French?”. 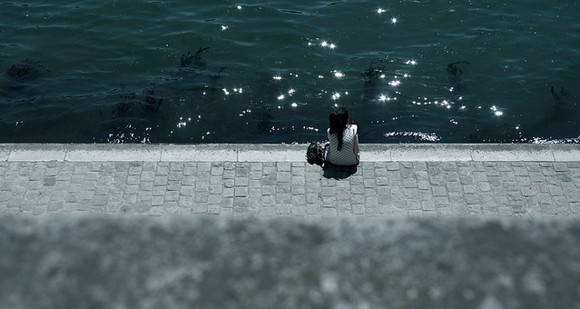 At first, I thought it was a test. People wanted to know if I had really lived in Paris. Because if I’d really done it right, then I would, of course, be totally fluent. But as time has passed and the question has continually been posed, I think it’s less of a test for me than it is some kind of self-assessment measure for the asker.

A lot of people dream of living abroad, but they hesitate based on their linguistic limitations. They ask, “Are you fluent?” because they assume the answer will be yes, and this will confirm their suspicion that they, without fluency, wouldn’t be able to hack it in a foreign country. I think they’re letting themselves off the hook too easily.

The question riles up my inner provocateur, and provides me with the perfect opportunity to wax philosophical on the issue of fluency. Am I fluent? Yes. And no. 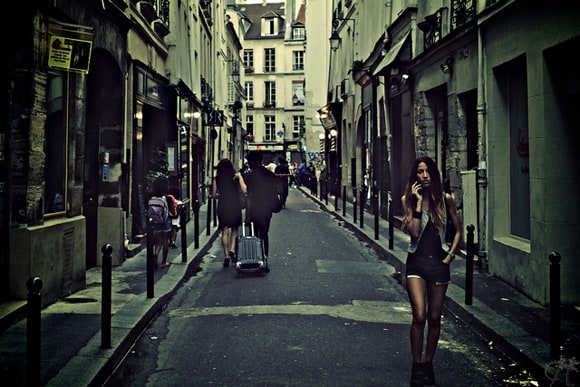 To the American ear, my French is “fluent.” I managed to function socially and professionally in Paris, and had a great time doing it. But when my shower exploded and the plumber came, could I discuss the ins-and-outs of water pressure and drainage with him? Definitely not (although via that experience, I learned to). While I lived in Paris, my French improved and stretched in ways I couldn’t have anticipated, and I surprised myself again and again by saying things I hadn’t realized I knew how to say—until they were coming out of my mouth. Then again, there will always be vocabulary that I don’t know, and conversations that I still can’t quite follow.

Would a native French person describe me as fluent? Maybe not. They always seem to pick up on my accent, and though I’ve often been complimented on my French, it seems there’s always an unspoken addendum: “You have very good French… (for an American).” 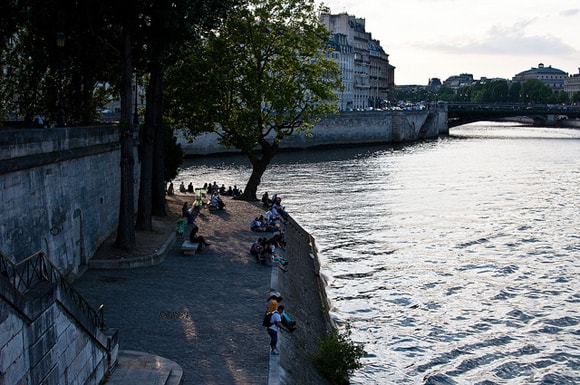 So when I’m asked if I’m fluent, my answer is always the same: yes and no. I now realize just how fluid language can be, and how the very notion of fluency differs from person to person and culture to culture. Living in France, I met people who spoke three, four, five or more languages. At first, that blew my perfectionist mind. How? How?! But then I realized, that’s the point: people who easily pick up languages don’t approach them with an aim to perfection. They just wing it. They learn as they go. They improvise and experiment, and they don’t worry about potentially embarrassing themselves.

And thus, they learn languages. So while the rest of us are discussing whether we’ve crossed some imaginary threshold between non-fluency and fluency, they’ve just lapped us—and learned Danish in their spare time. Of course, one can have an “ear for languages,” but more important, I think, is to have the courage for them. 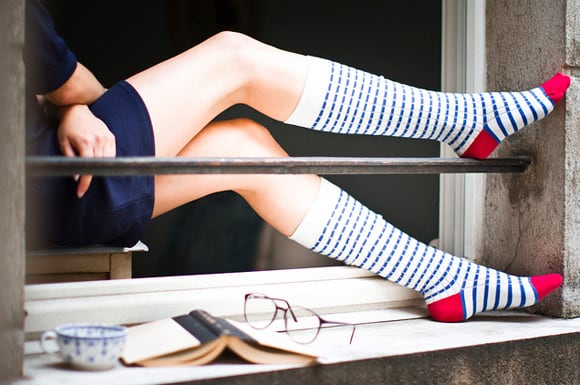 Soon after I moved to Paris, I was interviewed on a French radio show about Obama’s recent election. I had no idea what some of the questions meant, so I evaded half of them and just said whatever came to mind. Did I make mistakes? Definitely. Did anyone care? No. I’m still kind of shocked that I had the youthful audacity to do that interview, but when it comes to communicating, a little bravery goes a long way.

Written by Tory Hoen for the HiP Paris Blog. Looking for a fabulous vacation rental in Paris, London, Provence, or Tuscany? Check out Haven in Paris.

15 comments on “Answering the Inevitable: “So, Are You Totally Fluent in French Now?””

Fluency is such a lame word, you can tell people who ask you that question have never really studied a language. A better question is “how is your French?”
Asking if someone is fluent is a really loaded question, because you’re assuming fluency is a “real” word, but, as you mentioned, there are always going to be things you can do and cannot do with a second language.

Now… I’ve never thought people asking that question are trying to assess themselves, but maybe they are. But… I don’t really agree with what you said at all. Why would that let someone off the hook? I went to China and didn’t know any Chinese at all, THEN I learned it. I didn’t go there already knowing it. But maybe people secretly want you to say “no, I’m not fluent, actually I’m really terrible”, so they can feel better about themselves or something. Whatever, who knows.

What a fantastic post! I can totally relate to it-I’ve been living in France for nearly 2 years now and I still struggle with the language! It seems like fluency will never come to me, especially because I speak a different language at home.

Thanks for all the wonderful comments everyone, and to Tory for writing this insightful post! Becoming “fluent” is tough, certainly an ongoing pursuit.

Yes! Whenever I’m asked that question, I always answer the same way: I can absolutely get by, but if a plumber came, would I know the words for a burst pipe? Probably not. I could get there, I could find a way to explain–but it wouldn’t be effortless. Plus, I worked as a waitress–my “service French” is fluent, but there’s no way I could work in social media and marketing–what I do in NYC–in France. So yes and no to being fluent–although I will say that whenever I speak to French people here, they don’t realize that I’m American! So hooray for having a minimal accent 🙂

I loved this post! I can relate to it so much. I have seriously struggled learning French because I hate not being perfect at it. I am so shy with it and therefore it takes me longer to learn than those more courageous to practice. I always get the same question and I hate to feel like a failure when I say no, even after living 2 years in Paris. But this post has made me feel better. Thank you!!

This is so good. That’s one of my favorite questions that people ask, OY! But I suppose Americans don’t have the best reputation for speaking French. I’m glad to be out of the box 😉

The photos accompanying this post are beautiful. However, when I click through to the respective Flickr pages, I notice that they are marked “All Rights Reserved” with an option to licence through Getty Images. I am curious about whether you actually got permission to use them. Perhaps you have an arrangement with the owners that I am not aware of.

Hi Barbra! Thanks for your comment, and glad you like the images 🙂 Yes, we have agreements with the photographers. Anyone who would like to have their images featured on HiP Paris can also submit them via our flickr group: http://www.flickr.com/groups/[email protected]/

When asked if I am fluent in French, I usually reply that I am at best conversational rather than fluent. For me, fluency would mean that I can convey and perceive humor in French, and I’m not even close!

This is too true!
I have been learning french on and off for years..but as an Australian,it’s difficult to become ‘fluent’ without being immersed in the language..and even when I am in France, it takes a couple of weeks for the confidence to kick in…and THEN I wouldnt say I was fluent at all. The thing is, I can still understand and be understood, and have become content with just that. No more beating myself up for not knowing a conjugation at speed! In fact, just yesterday, although quite nervous, I had the pleasurable company of Rosemary from “Aussie in France” and her non english speaking hubby. Rosemary being a french translator and absolute ‘pro’, and I simply HAD to speak french. I decided to push away all feelings of embarrassment and just woffle on. We had lots of laughs, I made many mistakes, but the thing is ..we communicated just fine. That’s what counts “)

I love this post! I used to speak French very well when I was younger, then I stopped speaking for ten years and I felt like I was nul! I’ve just moved to France and I’m trying to get it back. For a long time I was frustrated because I would think ‘I used to sound better… I used to know that expression…’ but then one day it occurred to me, why do I need to speak perfectly? I have plenty of friends whose English isn’t perfect and it doesn’t bother me, so why should it bother me that my French isn’t perfect? I’m trying and that’s what counts. I will continually work on improving, but the idea of seamlessly blending in is really quite ridiculous and discouraging. So now I try my best to be proud of my accent and acknowledge my mistakes without dwelling on them.

Another event for improving your French, which I really enjoyed, is Franglish! Speed dating for languages (minus the dating?)… franglish.eu or I wrote a bit about our first time: http://hellobougeotte.blogspot.fr/2012/09/hello-language-speed-dating.html

Love this post! I’m constantly having to explain just how fluent I am to friends and family back home… and of course tourists I meet here. Surely after so much time here, I must be fluent. While I still say no, I have started arguing with the lady who tries to cut in front of me and I can respond much more effortlessly to someone asking for directions, whether I know the way or not. Those were my indicators that my French has finally gotten to that good place. Still not fluent though.

I get that question all the time and my answer is pretty much the same as yours. I have lived all over france for the last 8 years and I still find myself learning new words or expressions daily. I am always afraid if I say ‘yes, I am fluent’ someone will shortly after, ask me a question that I can not understand, and I will look like an idiot. However, my french friends told me that you know you are pretty much fluent when you dream in French. Since then, I throw all caution to the wind and say I am fluent.