Rediscovering the Art of French Cocktails at À La Française 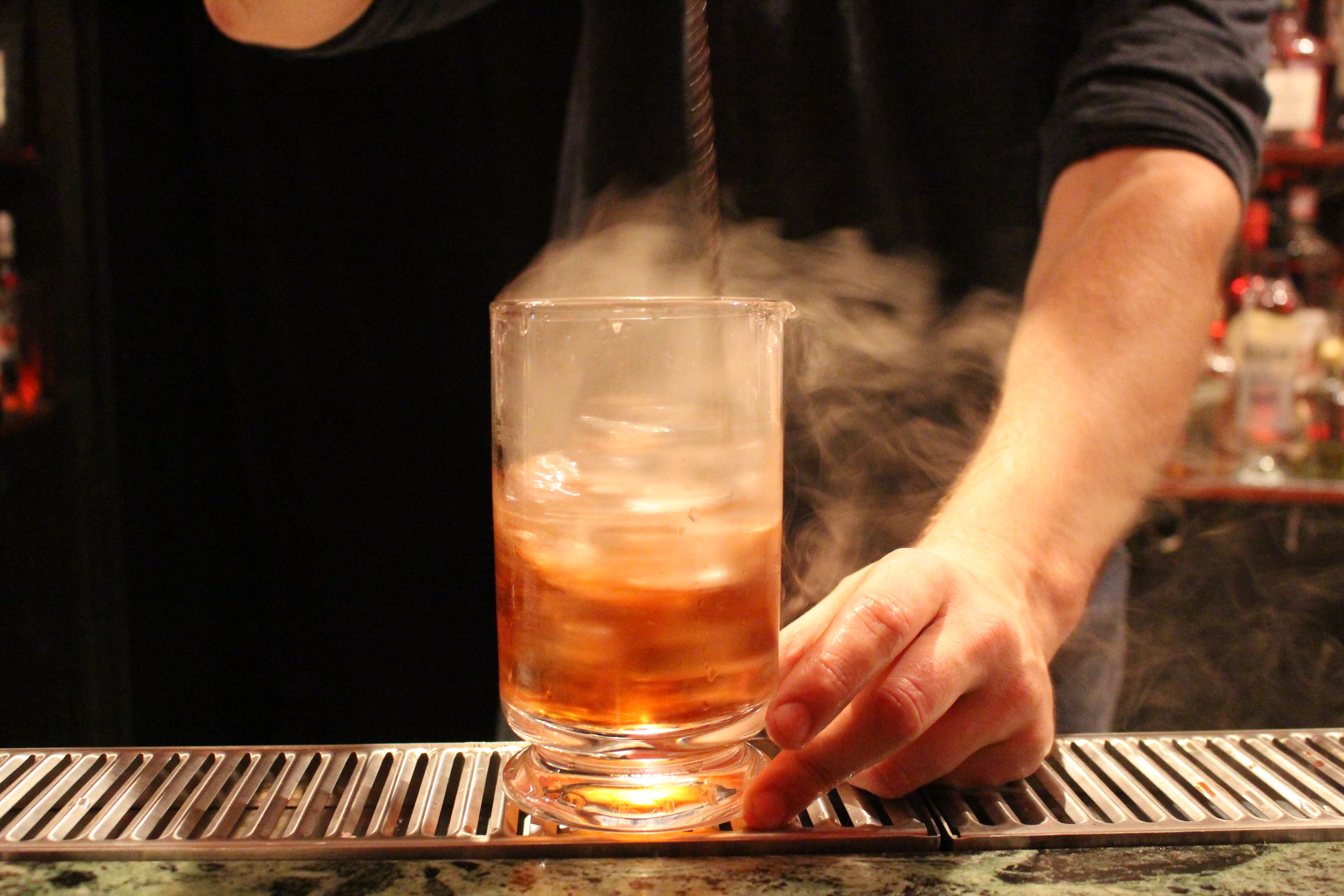 With its place firmly staked as one of the most happening areas of Paris, the 11th arrondissement does not lack in new, fresh spots to eat or drink. But with so many locations cropping up seemingly daily, all filled with inspiration spanning the globe, it’s nice to find a place aiming to keep alive the culture that the French people love so dearly. Tucked away in a nondescript side street off of the southern end of boulevard Voltaire, À La Française is a very French neighborhood favorite with a twist: incredible craft cocktails at exceptionally reasonable prices.

Owner Stephen Martin got his start in the restaurant industry at the age of 17, and has worked in numerous high-profile bars in France and elsewhere in Europe. He began to notice, however, that there was a lack of the true presence of French culture in bartending, so he dove into the project of rediscovering the art of classic French cocktails. Armed with his research and an impressive collection of cocktail books- some dating back to 1850- he opened À La Française to bring the Paris bar scene back to its formidable roots. 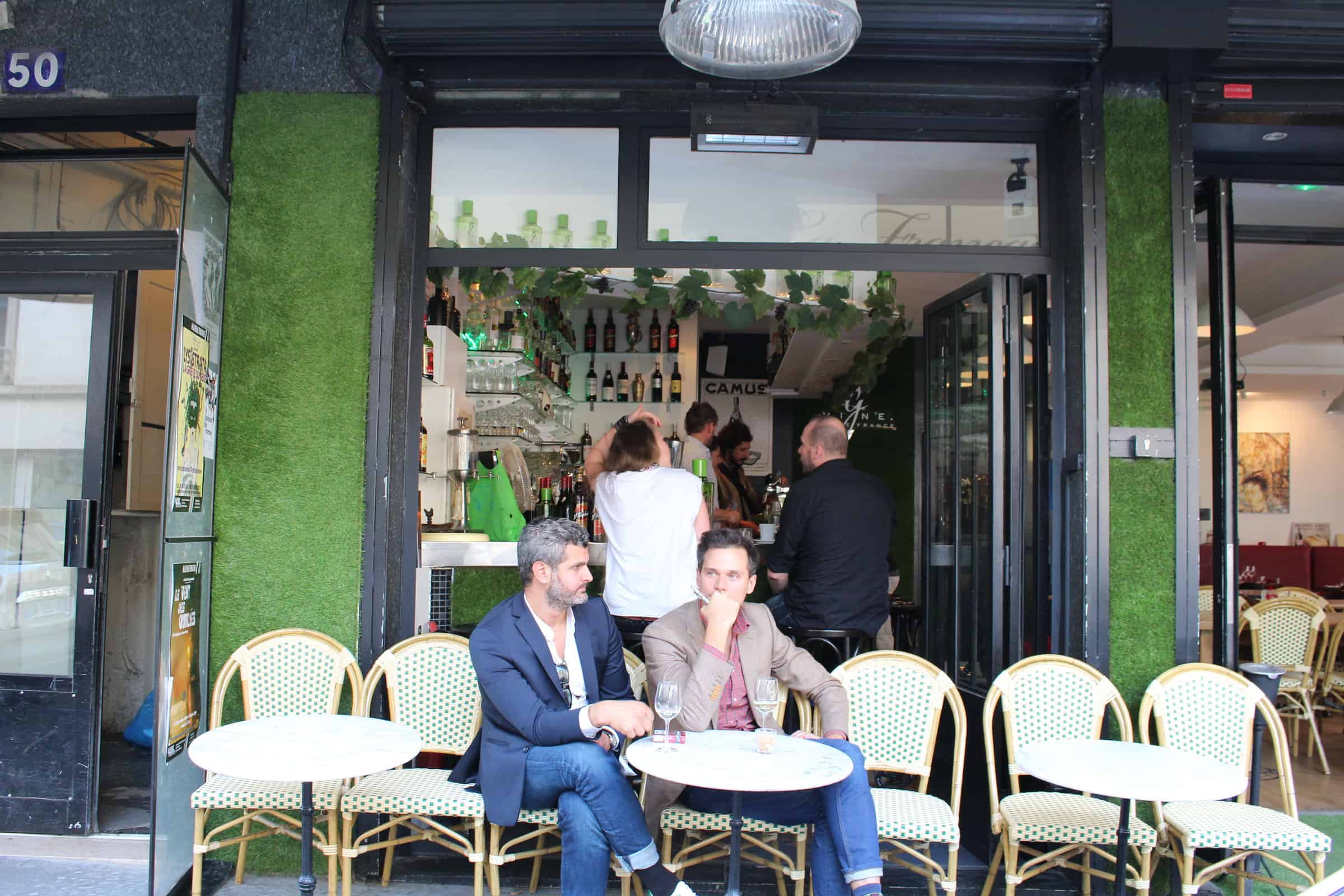 The business is separated into two fundamental parts: the bistrot upstairs and the bar downstairs. Up top, clean lines and red accents are the foundation for a classic bistrot setting, with fresh, delicious dishes and an offering of wine, beer, and aperitifs/cocktails (or “coquetels,” as it says on the sign outside, the French Canadian spelling) to complement the food. None are designed with a focus on alcohol; the menu even lists them as “drinks mixed with alcohol.” Some are twists on classic cocktails, like the mojito and the negroni, while others are unique to À La Française, such as their signature Eau Fraîche. The menu is simple yet varied; entrées include a house-made terrine (similar to pâté) and an oeuf á la mayonnaise flavorful enough to tempt even those who dislike the condiment. The list of plats includes traditional offerings like entrecôte and steak tartare, but the piece de resistance is a hamburger – comically named “hamburgé” on the menu – which features a gâteau des pommes de terre (thinly sliced potato strips grilled in the shape of a bun) in place of a bottom bread bun. 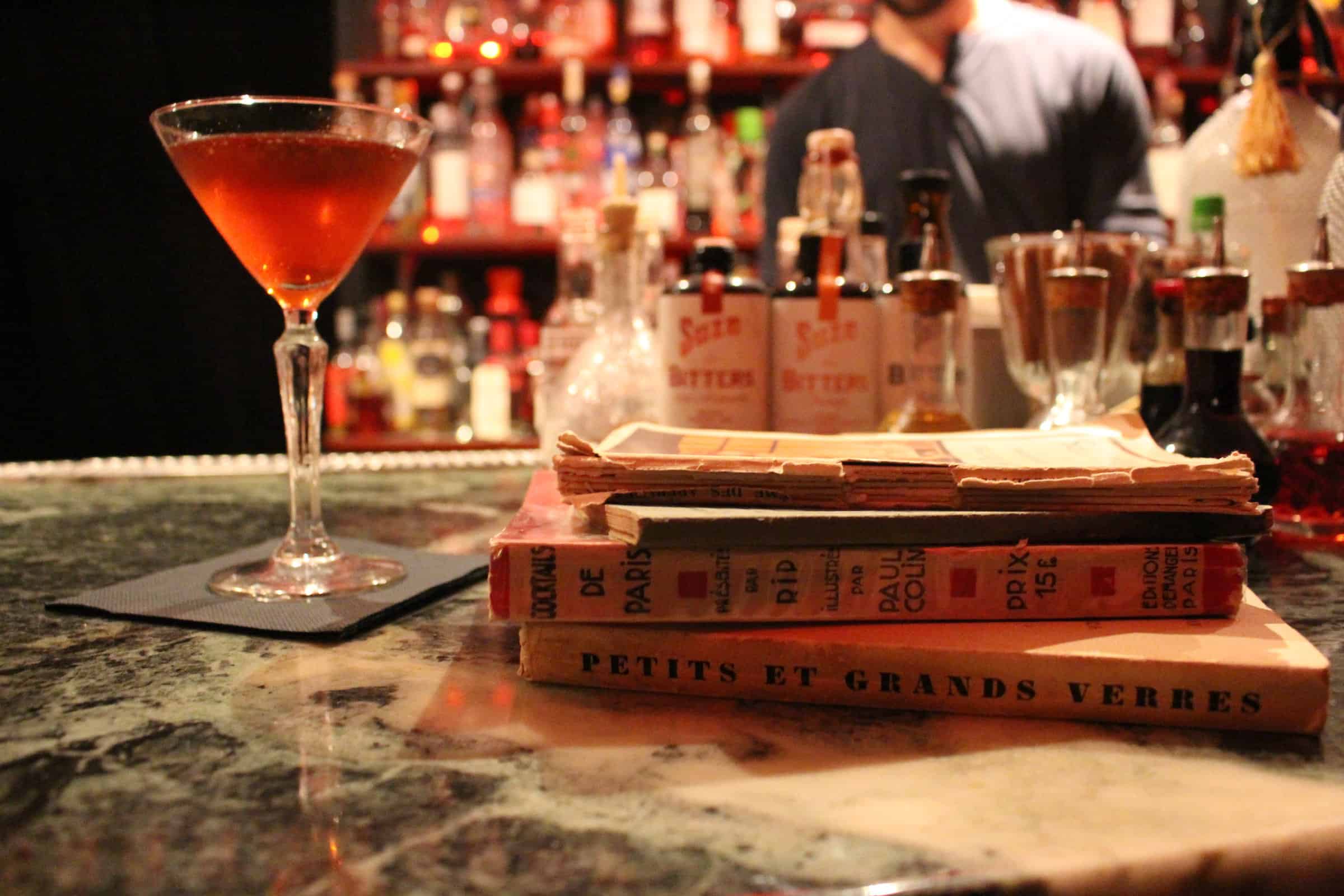 Downstairs, the ambiance changes to that of a lounge bar, luxurious yet minimalist in its decor, with the red-lit bar as the clear point of interest. All of the spirits amongst their extensive array are either French or come from French-speaking countries, and the signature menu items, recently expanded to 17 cocktails, are either originals by Stephen or right-hand barman Tristan Simon, some revivals of long-forgotten French recipes unearthed in Stephen’s cocktail books. The bar bridges the gap between the French and American traditions of mixed drinks, and the focus here is on taste and balance, to taste the alcohol the way it was meant to be appreciated when mixed with other alcohols or ingredients. Experience a 19th century vermouth cocktail or a “forgotten drink of ladies of la belle époque,” or sit at the bar and gain an understanding of why cocktail making is truly an art form by watching the bartenders flex their abilities. 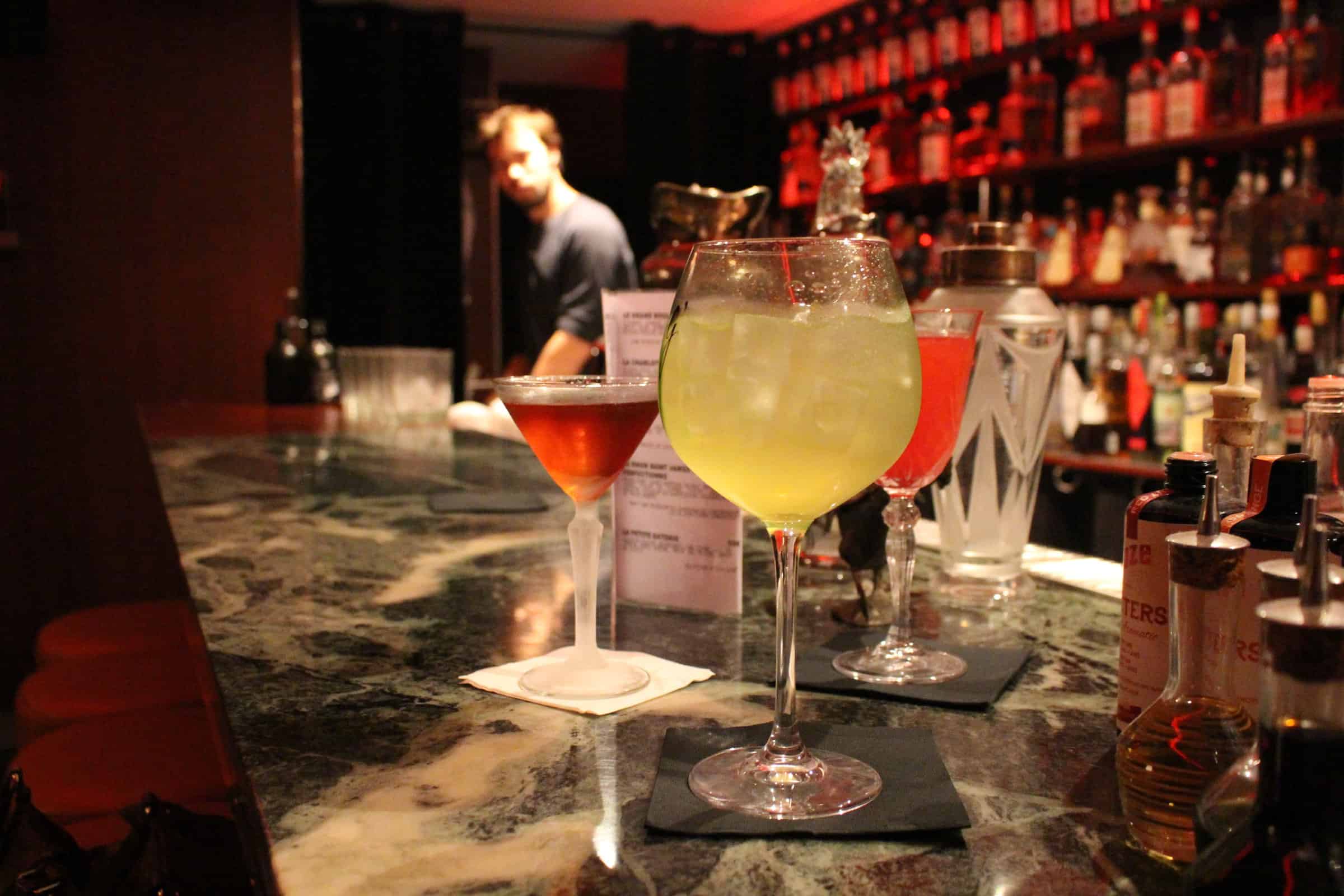 The reason above all that À La Française has so many repeat patrons, however, is the warm, welcoming attitude of the staff, a rarity in Paris. They remember their regulars and are just as open with newcomers, willing to answer any questions you have about cocktails or just to take an interest in those who come to the bar. “Bienvenue au bar,” Stephen will say, mixing cocktails for the couple at one end of the bar while chatting with the businessmen at the other end. People come for the drinks and food, but return for the friendly ambiance, drawing you into the very French setting and their passion for their craft. 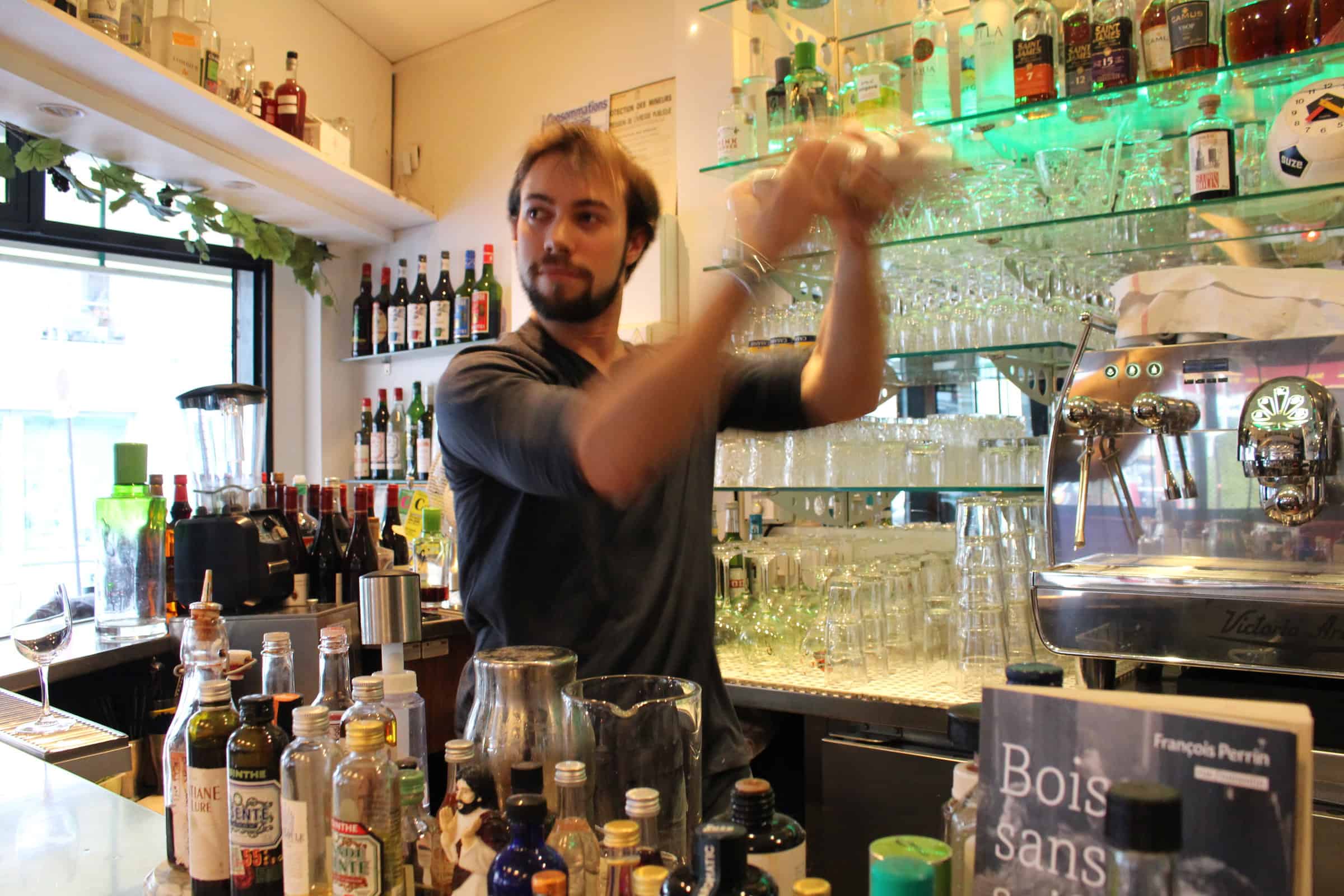 Written by Emily Jackson for the HiP Paris Blog. All photos by Emily Jackson. Looking for a fabulous vacation rental in Paris, London, Provence, or Tuscany? Check out Haven in Paris.

This looks like a great bar. I wish we had something similar where I am; but, I suppose I can’t be too demanding when I live in a small village!

I am at A La Francaise right now and Tristan is preparing the most delicious drinks and he is explaining everthing about the cocktails! What a wonderful place to be on this cold Paris night! Thank you!

Hey! Great article.! It’s on my list of places to try in Paris. Thanks 🙂

Worth a wander off Voltaire to be sure.