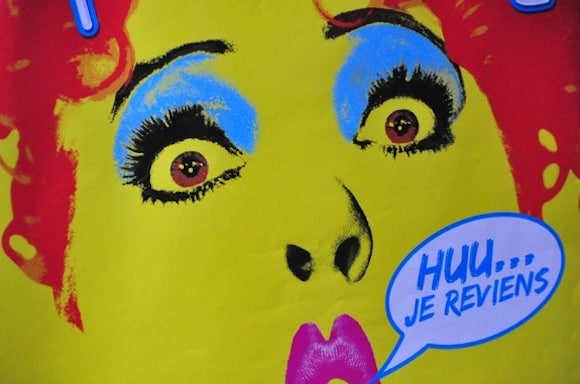 If there’s one thing I learned while living in Paris, it is that mediocrity is unacceptable. It is for idiots and Americans—it is not for the French. I was once walking up my street when a particularly agitated French woman came charging out of a little cheese shop. She was perturbed in that very French way: shaking her head and quietly fuming, as if someone had just done her a grave disservice. When I got close enough to hear what she was griping about, she uttered the phrase: “C’était tout à fait médiocre.” It was completely mediocre.

She was talking about the cheese, or maybe about the shop itself­—its merchandise, its presentation. Whatever it was, it had greatly offended her, and she uttered the word “mediocre” as if it were the most vitriolic insult she could possibly conjure up. Mediocrity—the ultimate shame. 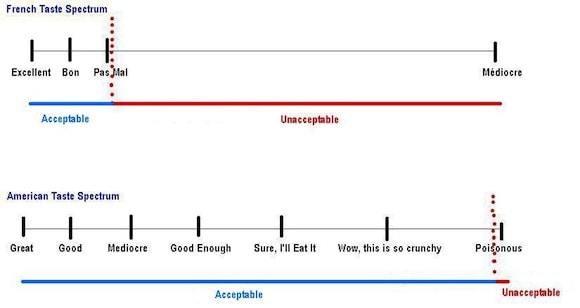 The incident seemed indicative of a larger theme that reiterated itself in myriad ways while I was living in France, particularly when it comes to food. In the United States, bigger is often equated with better, and mediocrity is sort of the norm. When something exceeds mediocrity, we’re often pleasantly surprised. Conversely, the French have higher expectations and stricter standards, particularly when it comes to edibles. Quality and moderation trump quantity and excess. If it’s not good, vendors do not sell it, people do not buy it, one does not eat it… or wear it… or tolerate it. I have drawn a little chart to help illustrate relative tolerance levels.

Notice the difference in the size of the “Acceptable” zones on these spectra. Notice the American “Go For It!” attitude, in comparison with the French commitment to “Only If It’s Worth It.” Maybe that’s why French people are so svelte. They would rather starve with dignity than survive on canned cheese. 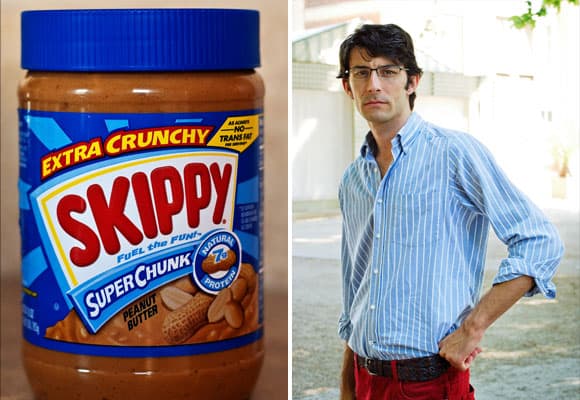 Of course, this is not true across the board. Crappy products are available everywhere in the world. But in general, French people are discriminating. Now that I’ve lived in Paris, I try to be too. Although sometimes I still get the urge to shove my face into a vat of peanut butter. Artisanal peanut butter, obviously.

Written by Tory Hoen,  for the HiP Paris Blog. Rachael Woodson is an American photographer who lives in Paris. Her work has been exhibited at Révélation 4 in Paris, The Visual Arts Gallery in New York, and featured in Shots Magazine and on DailyCandy’s website. Her work can be seen at www.rachaelwoodson.com. Looking for a fabulous vacation rental in Paris, Provence, or Tuscany? Check out Haven in Paris.

17 comments on “Cult of Quality: Meeting the French Standard”

Very good information. Lucky me I came across your website by accident (stumbleupon).
I’ve saved as a favorite for later!

Love the chart – TOO true!

A beautiful article. I agree all the way. food should be eaten for pleasure, not mere sustenance!

Love the diagrams! But surely ‘crunchy’ should be somewhere on the French taste spectrum too – In the good bit, I mean. I can’t eat out in France without coming across something ‘croustillant/e’ on the menu. Really it’s the ultimate accolade over here…

Quality blog post writing – way up there, EXCELLENT! I am not so American to know that!

hahahaha! this post was sooo true. One of my best friends is french and she only accepts the best! Not in a snobby way but if she is going to buy it, eat it, or wear it, it better be the best.

Isn’t this so fun everyone!? We just adore when Tory compares Americans to the French, on any topic! Have a lovely day and thank you for the great comments. 🙂 /Maggie

Very well-written! I love the chart…sums up the American attitude perfectly. Eating seems to be the biggest difference in the quality-spectrum & I’ve found hardly anyone “snacks” here; like why waste your energy on a measly potato chip? Meanwhile, I’m taking handfuls..thanks for the great post!

I often laugh at myself because “I want” in a very American fashion quality and quantity.Your chart is sadly true and hilarious.

very interesting. It makes sense though, if one maintains a high standard of quality, you spend less time wasted on unnecessary food, events, etc. Something to think about for sure.

Stop on by the blog when you get a chance, I have an award I’d like to share with all of the wonderful authors of the blog. Thank you for always keeping me up on all of the proper and most enjoyable places in Paris. I do appreciate it and find myself learning quite a bit. =)

I really got a chuckle out of this. So true!

Brilliant! I think I need to print that chart onto stickers and ‘grade’ my experiences for better or worse!

The drama reminds me of my daughter … when she was four.

HA! I love it. So many posts like this on your blog make me laugh. I can definitely imagine that scenario in my head!