Amy Thomas, Paris’ sweets goddess, recently organized a croissant tasting for a blessed few. To our great dismay, we were out of town and unable to partake in the buttery festivities. To make up for it, we’re sharing her write-up here so you can live vicariously through the smackdown with us… 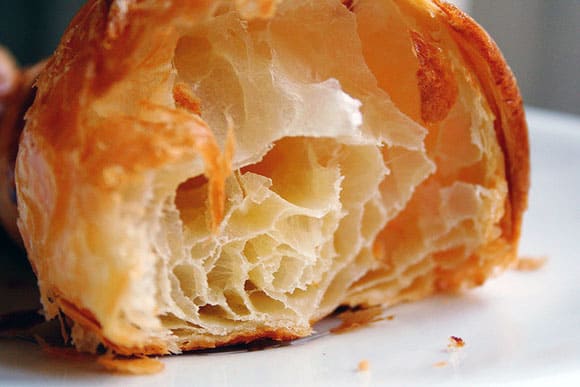 One of the first things many tourists do upon arrival in Paris is go to the nearest café and order a café au lait and croissant. We expats like to whisper conspiratorially, “Only tourists order café au lait, it’s really un crème…” If we’re nice about it, we even advise our visiting friends of this nuance so they can be more local than tourist.

But when it comes to the croissant part of the equation, there don’t seem to be many insider tricks or tips. As omnipresent as croissants are in Paris, they don’t inspire the same loyalty and rivalry as macarons, the same adoring squeals of delight as petit gateaux, or the same declarations of the very, very best like baguettes or cocoa.

So on a recent Saturday morning, I gathered a group of bloggers and friends from all pockets of the world to at least begin making comparisons and declarations—it was the third edition of an American Smackdown in Paris. What did it reveal? 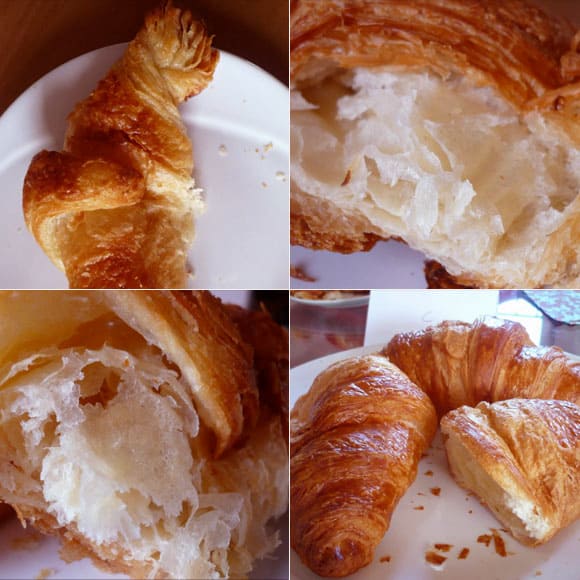 The contenders: (clockwise from top left): Gerard Mulot, Au Levain du Marais, sample plate of the mystery contender, and the inside of the Gerard Mulot croissant. Photos by Amy Thomas.

To begin, it wasn’t even easy selecting who should be in the Smackdown. A few years ago, David Lebovitz shared his love for the “buttery beauties” from Au Levain du Marais (28 boulevard Beaumarchais, 11eme, 01 48 05 17 14). This, in turn, gave the boulangerie’s croissants a solid following in the blogosphere. It seemed like a good place to start.

And among Le Figaro’s contenders from several years back, many of the big and renowned boulangeries were, as expected, on the list. Having personally heard hearty praise for Gérard Mulot (6, rue du Pas de la Mule, 3eme, 01 42 78 52 17), number four on the list (behind Pierre Hermé (what can’t this man bake to perfection??), Triomphe and Laurent Duchêne), we had our Smackdown competitor.

But it seemed a shame not to include a third specimen. From somewhere off the radar. A mystery contender. Just to shake things up and keep it interesting. So, for the first time, the Smackdown had three challengers.

Per usual, we were a motley crew of Smackdown tasters: One Cordon Bleu-trained pastry chef (Rachel Khoo); one visiting blogger (Carol G) and two local bloggers (Kasia and Cynthia); plus friends hailing from London, Australia, New Jersey and one homegrown Parisian. 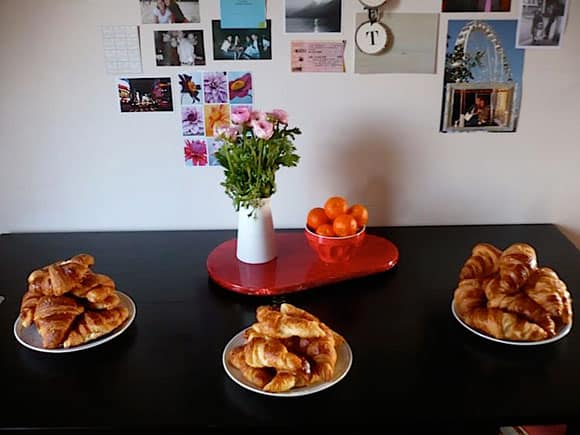 The contenders, staring each other off. Photo by Amy Thomas

What makes a great croissant, great? A crisp shell that sends giant pastry flakes all down your sweater, for one. Then an inside that is light, airy and spongy; not too dense, tough or chewy.

Then there’s the flavor. Rachel explained that with so few, and such basic, ingredients—flour, water, egg, yeast, butter, and a little salt and sugar—quality is essential. Including the butter, bien sur. Patissiers use butter with a higher fat content than what we get at the grocery store, yielding that unmistakable buttery croissant flavor.

While there was no runaway winner, the results of the Croissant Smackdown were très surprising and controversial.

For starters, Au Levain du Marais fared the poorest. While its “perfect form” was extolled, the flavor was considered “flat”, “not buttery” and simply “lacking”. It underperformed.

It was the exact opposite with Gérard Mulot. The non-traditional tubular shape disgruntled some tasters, but the flavor was favored. “Rich”, “yummy”, “super buttery”, “nice saltiness”—it was “what I expect from a croissant”. Happy bellies all around.

The real surprise came with the mystery contender, which was so neck and neck with Gérard Mulot’s top ratings, it nearly pulled an upset. On the positive side, it was considered “quite fluffy”, “puffy” and it “looked great”. But biting into it? “Flat”, “flavorless” and “blech”. Still, it really divided the room—four out of the nine tasters wanted to award this specimen with the Smackdown title.

Where did this second best croissant come from? None other than your local Monoprix. 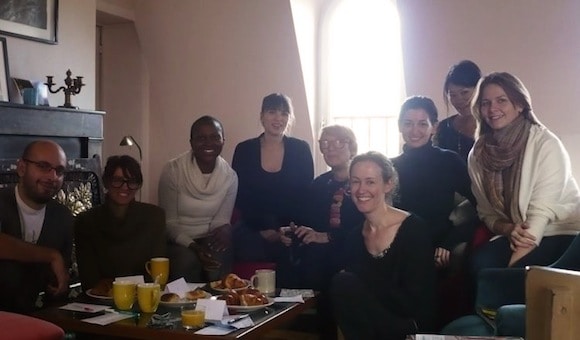 The tasting panel, glowing in anticipation! Photo by Amy Thomas

Written by Amy Thomas for the Hip Paris blog. For our amazing rentals in Paris, Provence & Tuscany check out our website Haven in Paris.

One of the funniest and most amusing posts…. I LOVE your vocabulary… 🙂
I am (nearly disappearing with shame) not a croissant person; the best ones go equally to a bakery in a tiny village in Western Switzerland (sadly, some very unfriendly personnel too, together with some very lovely ones…) and to the chain Coop for their ‘healthy’ Vollkorn-Gipfel…. I do generalise of course but having tasted croissants from many French bakeries I (AND my guests, family members, friends equally) were mostly disappointed with the delivered fare and much preferred the bread. Having said that I shall take note of the shops you got your croissants from – certainly working nearby a Monoprix helps at least with one contender!!!
Thank You! DELICIOUS PHOTOS….

Ahhh, what a treat for those who got to be part of the challenge. If there is such a thing as the next best thing to Paris,then I at least have that -Bakery Nouveau in West Seattle WA-buttery and flakey and so delicious. When in Seattle make sure you stop by and the twiced baked almond croissants are heavenly. I’m on my way out the door to buy some now !

Make sure you get real croissants because the ordinary cheap ones are made with margarine. But a real croissant is made with 30% butter. Luckily I am not a fan of either kind!

I croissant-taste-tested my way through two weeks in southern France in September…and I’m still wearing a little croissant-shaped tummy to prove it! Sounds like a fun event.

Ooops! Eric Kayser that is.

I love it! We just returned from “our” apartment on Blvd. St. Germain which we were over the moon happy with. An added bonus was that Eric Kayer was just a few steps away – and we soon discovered, there is definitely a difference. Thank goodness for the 3 flights of stairs to our apartment as it kept our indulgence in check!

‘Tis a tough job, and I’m all too happy to do it! Especially when I can share the fun and flavors with a great group of friends. I’m also happy to hear everyone else is doing it, from Boston to Buenos Aires – all in the name of legitimate research of course.

Great idea! I just woke up and I really want one, or two, now. Good thing there’s a Monoprix and a Gerard Mulot within 10 minutes of my place. Maybe I’ll do a little tasting experiment of my own 🙂 Btw, I love Monoprix brand coffee!

Funny you posted this today, as I did read it when Amy posted it but today my husband, the poor Pup and I walked too many blocks in search of a store that sells “real croissants” as opposed to the sweetened sticky small things they eat here .. (medialunas)
We were sent on a wild goose chase and everyone is grumpy now.

It’s a tough job, but someone has to do it. I am sad to say I haven’t had the courage to get a croissant post my Paris trip. I need to start researching a good place in Boston until I can again head back to Paris!

Ohhhhh what fun! Paris really is where it’s happenin’! We only have two boulangeries in my village (well, three but ones never open when I need it to be) – I just got back from taking my new Irish friend to the one that is better than the other so she could taste the difference. Funny how people are doing the same thing on opposite sides of France…

Ohhh I’m so upset I missed this one!! Looks like everyone was hard at work researching and analysing, just what a Saturday morning should look like =)

That’s interesting. I just realised that I should only ever be buying croissants in the morning!