Frog Fight: The Search For Paris’ Best Barista (and Cup of Coffee) Is On

We’re a bit obsessed with Paris’ budding coffee scene as of late. At the heart of it all are the Frog Fights, where Paris’ best baristas compete to show off their brewing, frothing and presentation skills. This month the event took place at Coutume Cafe. Our girl about town, Sara Rahman, has the inside scoop. Stay tuned for the location of the next event! -Geneviève 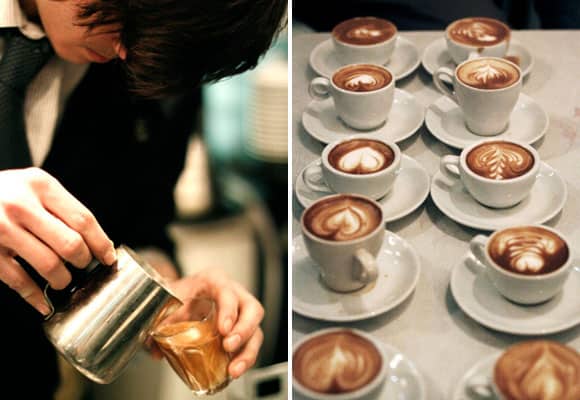 Earlier this month, an eclectic crowd bulged from the seams of Coutume Café, the host of Paris’ 9th monthly Frog Fight barista competition. Cameras clicked, wine glasses clinked, and at the center of the huddle, 25 or so baristas took turns in pairs behind a gleaming espresso machine, shuffling to execute caffeinated masterpieces as quickly and elegantly as possible. 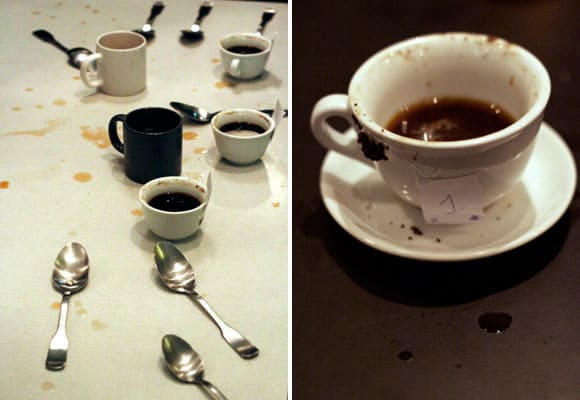 Certainly not the first item on the menu to tempt the flocks of foodie pilgrims seeking sensory nirvana in Paris, coffee is usually an afterthought in traditional French dining. Sort of like the benediction rounding out a Catholic mass: essential, yes; transcendent, only if your priest/server is endowed with certain god-given qualities rarely found in the earthly realm.

Fortunately for Paris and all of us who pray for mercy each time we encounter the flat, soupy stuff that passes for espresso in some of this city’s finest restaurants, something interesting is brewing in our back alleys. In the past couple of years, several hip coffee shops have popped up around town, surprising their easygoing clientele with something other than the atmospheric qualities French cafes always get right: really good coffee. The Frog Fight is part of this trend. 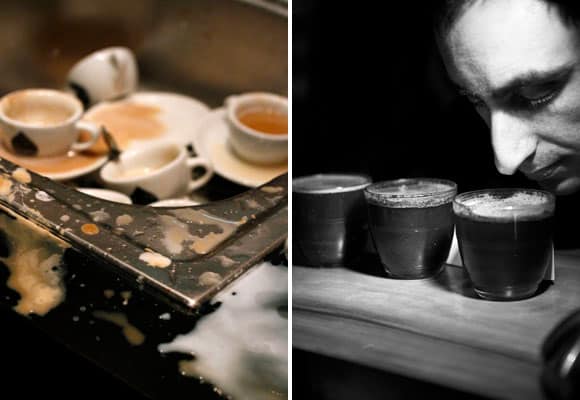 Behind the games are the baristas themselves. French Thomas Lehoux and American David Flynn organized the first competition last August at Café Lomi in the 17th arrondissement while both were working at Paris’ forerunning coffee house, Caféothèque. The event now takes place on a monthly basis, to the delight of local coffee-lovers who follow it from one host café to another each time. The enthusiastic band of artisans sticks to its motto,  “Pour les baristas, par les baristas”, and it’s pure love of the art rather than self-promotion that drives the competition. 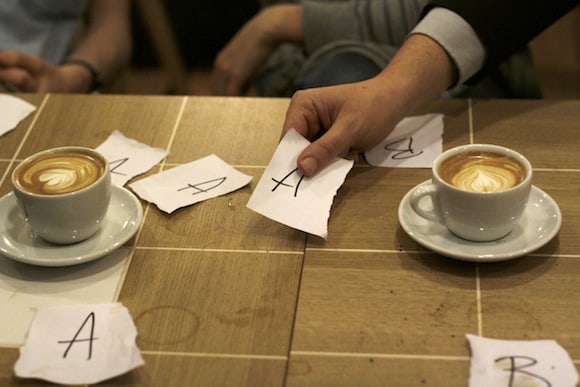 But you can’t keep good news under the burlap for long, and over the past year, the small group has garnered a fair amount of press. They were featured in the New York Times last year, and at Thursday’s event, several reporters and food writers were on the scene.

The contest itself mainly revolved around design: artfully free-pouring frothy milk into a short or tall latte to create delicate flourishes and hearts on the surface. Coffee roasting being out of the question for now, there can’t be much in the way of an actual tasting competition. To make the three-hour event more interesting, the evening began with a game for the onlookers themselves. Guests who arrived early signed up to taste a variety of coffees and guess each blend’s country of origin. About as easy as mapping a genetic code for most of us, but fun nonetheless. 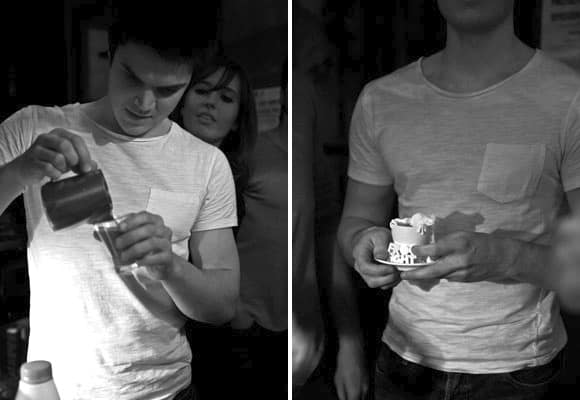 The baristas competed one-on-one, and each round of cups was carted through the throng of onlookers to a panel of judges who examined them carefully before announcing the better design. For the final round, the judges selected from the top three competitors from the previous rounds. Flynn, a repeat champion, went home with the trophy one more time.

However simple Thursday’s games were, the atmosphere was bubbling, and the crowd stuck around, chatting and cheering at the creations emerging from behind the bar. If this buzz of barista activity is any indication of a shift in the city’s culinary scene, gourmet coffee culture is finally making its way to little Paris, spark-signaling her distress on the banks of the Seine.

Check the Frog Fight page on Facebook for updates on upcoming events: http://www.facebook.com/#!/frogfight. 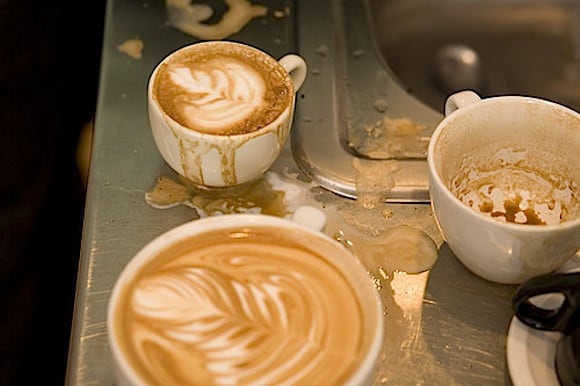 Written by Sara Rahman for the Hip Paris Blog. For our amazing rentals in Paris, Provence & Tuscany check out our website Haven in Paris.

7 comments on “Frog Fight: The Search For Paris’ Best Barista (and Cup of Coffee) Is On”

We are a family of 7, would anyone be interested in giving us lessons on latte art? My husband and I have been doing a lot of online research; but really need some one on one time to show us in greater detail and all the mechanics of a barista! We live in 95 -Il de France just outside of Paris! Please let me know if you are interested? Thank you for your consideration!! The school is in Marseille for 3 days, and we were hoping for something more local!

Hi there! Have you checked out the official Frog Fight website: http://frogfight.tumblr.com/, perhaps you could contact them directly to find a barista tutor. Good luck and let us know how it goes!

Wow, I actually love this! I will add Frog Fight to my bucket list!

Loved reading your post about the Frog Fight barista competition. Sounds fun, would have loved to be there. After 7 years in Paris I do miss the coffee, although I prefer a double espresso served with the chocolate-covered almond.

They are all quite cute indeed!

Are any of the baristas up for grabs??