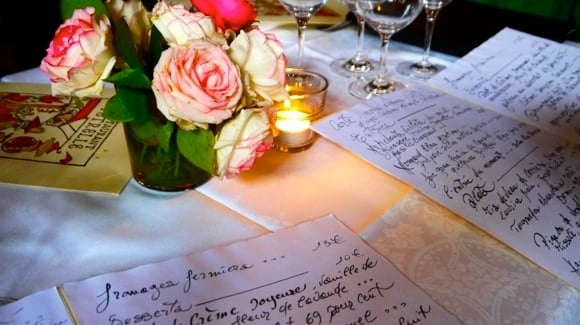 Pétrelle is a small French restaurant tucked away in a quiet corner of the 9th arrondissement. It’s not new – indeed it’s been around for 18 years – and it’s not easy to stumble upon, yet it has enjoyed continued success among discerning locals and tourists alike for almost two decades. Erica Berman from Haven in Paris, Forest Collins (52 Martinis), Kasia Dietz (Love in the City of Lights ) and I (I Heart Paris ) decided to go and check it out to find out just why just why this unassuming but charming restaurant is such a perennial success. 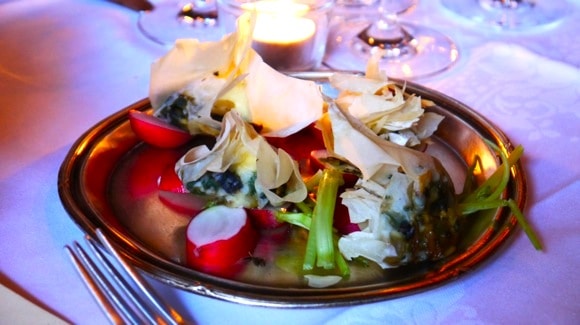 So, first thing’s first. What did we think of the food?

Erica: The meal was tasty, fresh, honest and uncomplicated with pleasing portions and lovely artistic touches. It felt like a French ‘potager’ had come to my plate since I, unfortunately, could not go to it. The vegetables were perfectly cooked, the fish tender and juicy, and the desserts rich and sinful.

Kasia: Beginning with a courgette and girolle appetizer, the meal was very ‘fresh from the farm’ in flavor and artistic in composition – Basquiat, if I had to pick an artist. My Saint-Pierrefillet was a small but flavorsome portion complemented with a mélange of vegetables and herbs – this dish more a Kandinsky. The rich chocolate mousse left little room for the complimentary meringues eyeing us all evening. Hard to resist!

Forest: Well-prepared fish and proteins were dressed up with pretty veggies and garnishes like fancy hats on racing day. Cheese was served the way it should be: in big chunks on a plate allowing guests to cut off their own portions.

Kim: A very French menu with classics such as ris de veau, beef tournedos and a seasonal fish of the day featured on the hand-written menu. The focus is on simplicity and letting the quality of each ingredient shine through. I chose the fish of the day – a fillet of John Dory, cooked to perfection and served with a selection of seasonal vegetables – followed by a pudding of raspberries in a fluffy creamy mouse and with a crunchy mille-feuille style biscuit. 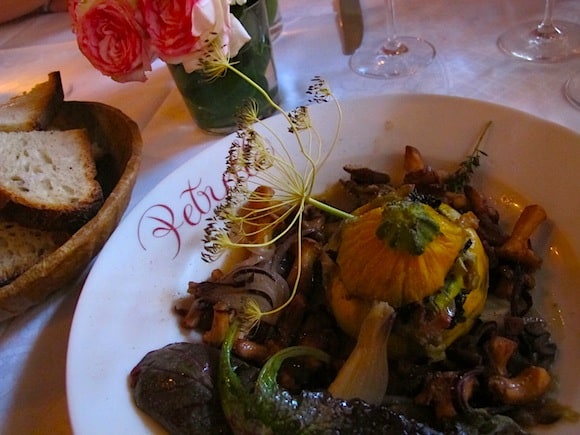 And to accompany the food?

Kasia: The meal and mood called for Chablis.

Erica: I was impressed that when we asked for a Chablis recommendation (there were quite a few choices), the waiter recommended the least expensive bottle on the list, instead of the most as would have been easy to do. It was crisp and delicious. Perfect.

Forest: A reasonably priced and well-recommended crisp Chablis both whet the appetite and worked with the food.

Kim: I didn’t sample the wine, but appreciated the jug of tap water and the lack of pressure to order bottled water! 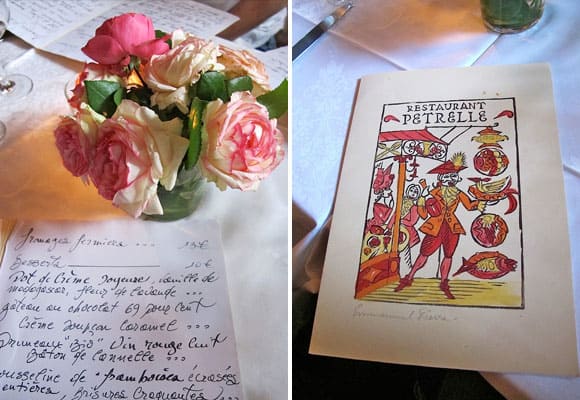 Erica: Friendly, discreet and competent are the first words that come to mind. Knowledgeable, bi-lingual and available when needed. Service was relaxed, neither fast nor too slow.

Forest: With only three staff running the operation (one cooking, one cleaning, and one serving) service is neither punctual nor perfect but is utterly pleasant.

Kim: I found the service was friendly without being intrusive, with just one very charming and professional waiter serving the whole restaurant (which has around 30 covers). The waiter spoke perfect English, was very patient with us and helpful with any questions we had. He was also aided by the house dog and cat who also seemed to be working the front of house the night we visited (and the kitchen, but I’ll turn a blind eye to that).

Kasia:  The sole waiter was aloof but attentive. It was the restaurant cat whose affections none of us could seem to win! 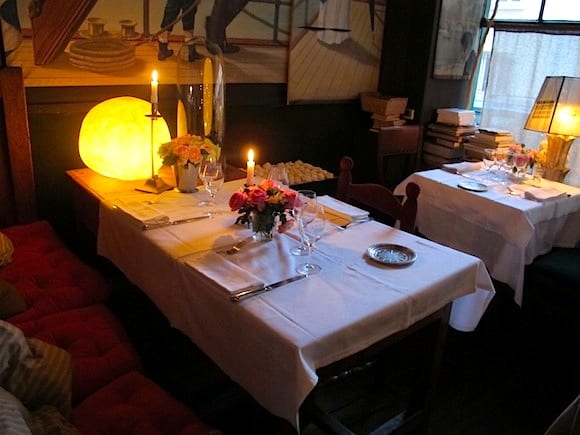 Erica: As a lover of brocantes, and what I imagine to be the feel of a country manor (pets included), this intimate setting worked perfectly for me. From the bouquets of English roses, fresh produce, stacks of books, peeling wall murals, heavy velvet curtains and flea market clutter dotting the restaurant, to the antique towels and feathers in the bathroom and the strange box with a mysterious crystal in it on the table, I found it all came together nicely. I was amused and entertained by the frequent visits of resident kitty and doggy although this might not appeal to some.

Kasia: The decor is equally elegant and eccentric, displaying glass chandeliers above a seemingly random collection of books, art and ethnic artifacts. What proved most unusual was the contrast in the wall decor. One side was romantic while the other invoked a more cool and modern feeling.

Kim: The restaurant, on a quiet road in a mostly residential part of the 9th arrondissement, is unassuming from the outside. The cozy, softly lit dining room, decorated with an eclectic and eccentric mix of styles and a selection of various antique knick-knacks, hides from the street behind a heavy velvet curtain. A still-life type display of vegetables on the table at the entrance puts the accent on the fact that Petrelle uses seasonal market produce, and gives the place a homely, country-house vibe, further enhanced by the aforementioned presence of the resident cat and dog. 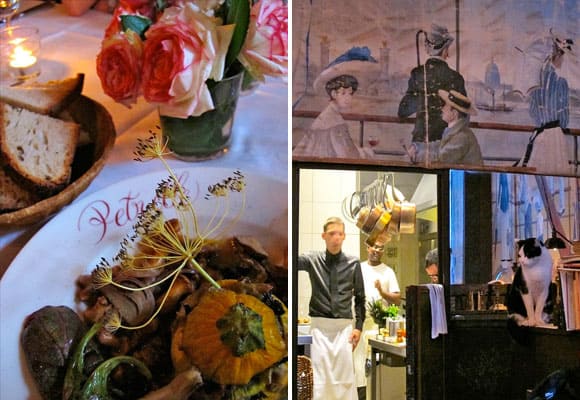 And so what’s the overall verdict?

Erica: I was happily seduced by this subtle yet sophisticated restaurant. I would have to say that the fact that this restaurant managed to thrive for 18 years on a tiny side street in the northern 9th speaks for itself.

Forest: I’ll definitely return for the tasty food, relaxed and intimate atmosphere and the quirky stylishness.

Kim: Definitely one I would recommend, especially for its authentic and unpretentious French cuisine and its eccentric and romantic atmosphere. 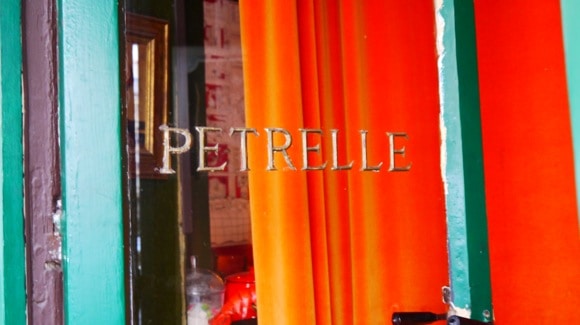 Read more from these lovely ladies on:

Collected by Kim Laidlaw Adrey for the HiP Paris blog. Looking for a fabulous vacation rental in Paris, Provence, or Tuscany? Check out Haven in Paris.

parisbreakfast: For $$$ question, I think w/ wine we paid around 60 Euros per person with a bottle of wine between three.

Another fantastic gem to add to my ever growing file on the fabulous places that you ceaselessly uncover.

Hi Carol. It is a bit pricey and they are only open for dinner. But it is lovely and you should take your ancient 2nd cousin there! Are you in Maine now? Paris is COLD! Erica

Do they do lunch?
$$$?
I have an ancient second cousin in Pigalle – it would be fun to take her there…
merci
carolg

Everything looks delicious! This restaurant is going on my “must visit the next time in Paris list”. xoxo, B

Sounds lovely, I enjoyed reading everyone’s opinions, great idea! I am putting it on my list for my next trip!