Spoiled in Italy: A Delicious Lunch in Montepulciano

Erica Berman was lucky enough to spend a couple months in gorgeous Genoa, Italy, this summer. She met up with HiP Paris friend and contributor Steve Brenner for a leisurely lunch in the historic town of Montepulciano before touring some villas in Tuscany. After reading his mouth-watering account of their meal, we couldn’t keep ourselves from sharing it with you here! -Geneviève 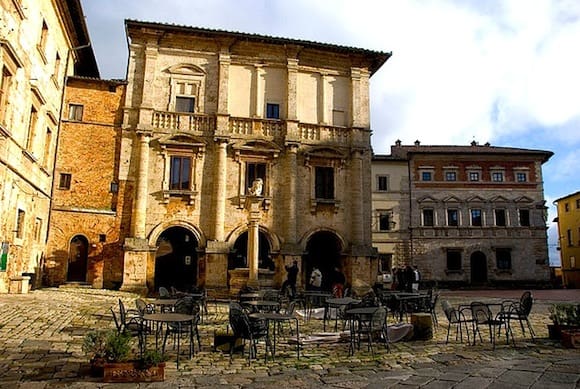 A square in Montepulciano (Stefano Piemonte)

Yesterday I drove up to Montepulciano to meet (in person) Erica Berman of Haven in Paris and her friend Mattia after literally years of email and skype exchanges.  I’ve guest blogged on her popular HIP Paris blog, and we list a few of her flats on Cross-Pollinate, but we’d never actually met in person. 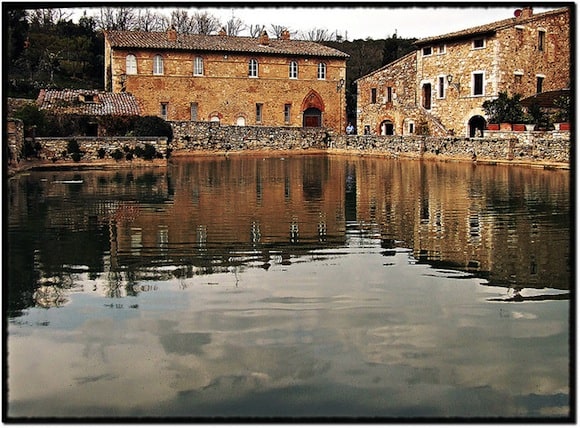 She was coming from Genova to Bagno Vignoni (above) to see some flats in Tuscany for her site, so we decided to meet nearby.   I checked my trusted Osterie d’Italia published by Slow Food Italia, which has NEVER let me down, and we placed our bet on Acquacheta in Montepulciano.

They were very insistent on us being there at 12:30 sharp. They will only accept reservations at 12:30 or 2pm, and they were passionate about giving us only one glass per person for both wine and water (per tradizione, apparently). The food was good – started with some amazing pecorino cheeses, one aged in walnut leaves, one with black truffles.  Without a doubt, the closer you get to Pienza, in Tuscany, the better the pecorino. 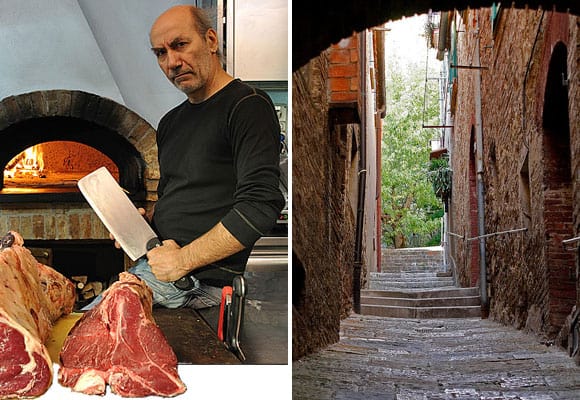 The kitchen at Osteria Acquacheta, alleyway in Montepulciano (Jean-François Gornet)

We then had pici pasta (thick, eggless noodles) with porcini mushrooms.  Then some sautéed zucchine with pecorino and a salad of green radicchio with a sauce called “aglione”, a cross between garlic and leeks.  For dessert I had a baked whole pear covered in chocolate sauce.  Mattia was adventurous with a spuma di mascarpone, flavored with local white truffles.  Erica, at that point, was stuffed. 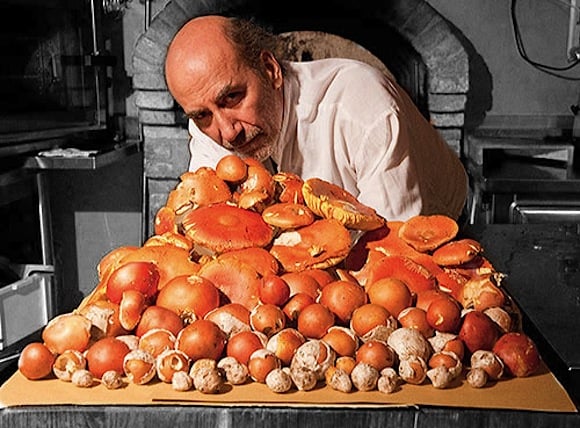 Chef Giulio of Osteria Acquacheta with a lot of mushrooms!

As it was nearing 2pm we left them their table and wandered up the monochromatic streets with nothing but tourists (Italian and foreign) to a central piazza where we sat in the sun and talked shop.

At that point I’d taken no pictures.  Not of the food.  Not of the views.  Not of the town.  Zilch.  Erica had to point out that even though it might be commonplace for me to jump in the car and spend the afternoon in a picturesque, medieval hill-town in the lush Tuscan countryside, for others it’s the stuff of dreams. 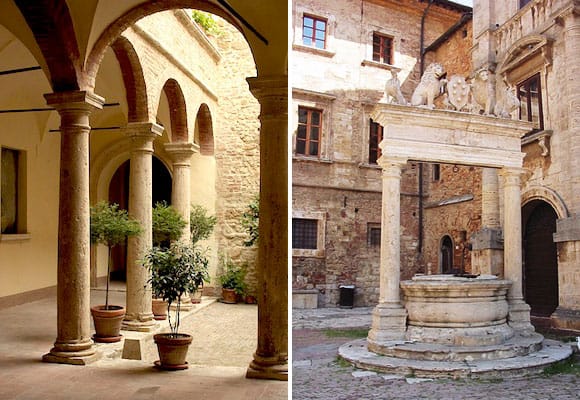 We said goodbye and as I walked to my car, I realized she’s right.  But I don’t take the beauty of Italy for granted.  I just don’t think to take pictures, or to write about it, as it’s been the constant backdrop of my life for so many years now.

Before my car was a lookout point over the countryside.  So I stopped and took out my iphone.  Snapped a shot outward toward those famous rolling hills and back at the town behind me, and realized that of all the things one could be spoiled by, Italy is a pretty good one. 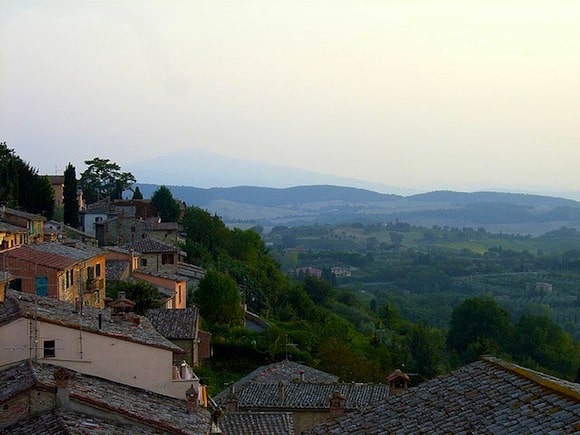 View of the Tuscan countryside from Montepulciano Bruno Conquet

Written by Steve Brenner. Looking for a fabulous vacation rental in Paris, Provence, or Tuscany? Check out Haven in Paris.

7 comments on “Spoiled in Italy: A Delicious Lunch in Montepulciano”

Oh to be there now, eating indulgently and then strolling the hills afterward…

I ache for Italy! Those photos reminded me of all the great eating I’ve done in Sienna and Florence.
Thanks for sharing…

Such a beautiful (and delicious) part of Italy.

What a fantastic lunch. The one glass syndrome is very common here in the Vendee, and the owner/chef sure didn’t look like the kind of guy to disagree with!

This looks simply magical! I’d jump straight into any of those scenic pictures right now!

Drooling. I’ll be bookmarking this post for my trip to Italy next summer. Thanks!