What can I add to this week’s hundreds of tributes to the legendary proprietor of Paris’s Shakespeare and Company bookshop, George Whitman, including one by the writer, Jeanette Winterson?

Why was she impelled to remember him in print? Because, like so many others, she had stayed at Shakespeare and Company. George Whitman started a tradition of hosting writers, most famously members of the Beat generation, and the bookshop’s ‘Tumbleweed Hotel’ is still a place where literary dreamers can exchange a few hours’ work in the shop for a bed on a bench amongst the books of George’s personal open library on the first floor.

When I came to Shakespeare and Company a couple of years ago, it was a while before I actually met George. Already in his mid-90s, he spent his days in the apartment on the top floor.

He still owned the shop downstairs, now run expertly by his daughter Sylvia and her team, its ‘Tumbleweed Hotel’ principles intact.

When they arrive, Tumbleweeds are required to write a brief biography for the shop’s records. Employed by the shop to create stair murals, I decided I would do this later. Anyway I was here to draw, not write. I wasn’t a Tumbleweed.

The next time I stayed I didn’t write it either, but I did spend my time writing. I’d do it on the next visit.

The last time I visited the shop in October 2011 , Paris was cold. George had just suffered a stroke and was in hospital, ‘recovering well’. The writers’ room, with its tiny electric radiator, was warm. Under my window, tourists snapped continually; Tumbleweeds lunched at the little round table by the door; drunks gathered at the fountain; a busker turned up and performed Shakespeare’s most famous speeches in rotation. Later on, the drummers took over outside the cathedral. 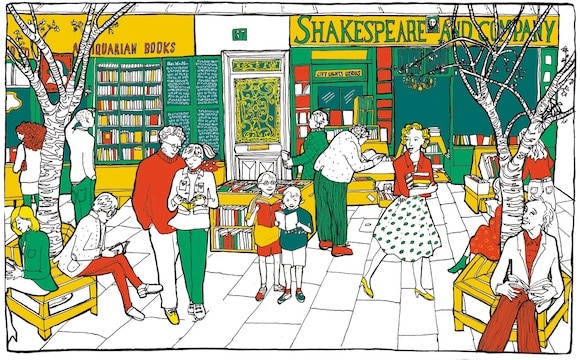 I stopped writing to eat at the café across the road. The man at the next table was telling his teenage daughter – her first trip to Paris – about how he’d been to one of George’s famous Sunday teas and heard the bookseller relate how he had set off to walk from North to South America but had been forced to turn back in the impassible Central American jungle. He was like a child, the man said. It was like he didn’t understand why he just couldn’t go as far as he wanted to go.

But after opening Le Mistral in 1951, which became Shakespeare and Company in 1964, the traveler largely stayed put in Paris, dying peacefully last Wednesday in his apartment above the shop, two days after his 98th birthday.

I walked back from the café to the bookshop and got back to work.

I thought about space: Kilometer Zero in front of Notre Dame; Place René Viviani  next to the shop where the 2010 Shakespeare and Company Literary Festival was held – a free event into which the public could wander. That was the last time I had seen George downstairs; wearing an extravagant paisley jacket, he was carried in triumph through the shop on a sofa held shoulder-high by Tumbleweeds.

And then there is that other space, George’s library above the shop, also open to anyone who wants to come in and use it.

I stopped work. Downstairs I heard the rumble of Tumbleweeds pulling the carts of books into the shop as they begun shutting up for the night.

The moon rose over Paris.

All these things I noticed only courtesy of the man upstairs : by staying where he was, Whitman allowed others to travel.

Written by Badaude for the HiP Paris Blog. Looking for a fabulous vacation rental in Paris, Provence, or Tuscany? Check out Haven in Paris.

You should write more often – this is perfect!

Very lovely tribute…for a lovely man and a lovely place.

I lived in Le Mistral for a couple of months, in 1959, I was 18 at the time, in the first floor up that little staircase, and during my time there met Henry Miller, Lawrence Durrell, Ginsberg, Corso and Orlovsky, Indian mystic Krishnamurti, artists, writers and more who all came to the. I cleaned and helped out daily, and walked all the way to Le Printemps for a free hot chocolate and croissant for breakfast, and enjoyed a dinner on snacks at the latest gallery opening. George was amazing then and then I visited Paris about 4 years ago and got to say hello and have a chat I was so delighted to tell him about the books I had written and he was very pleased he had sheltered an embryo writer – love you George!!!

This is the most touching memorial I saw in a long time; and I’ve never even met GW personally. But like every visitor (and more regularly now since I live not far from Paris) I know ‘all’ about the bookshop and its ‘coming alive and life story’… I also get the newsletter and I take all my visitors (not only English spoken ones!) to the shop if we can manage…
Thank you Badaude for those words; they describe the place and the very important founder to the dot on the ‘i’
Merry Christmas to all
Kiki