Why Visit Paris? For The Chocolate, Of Course 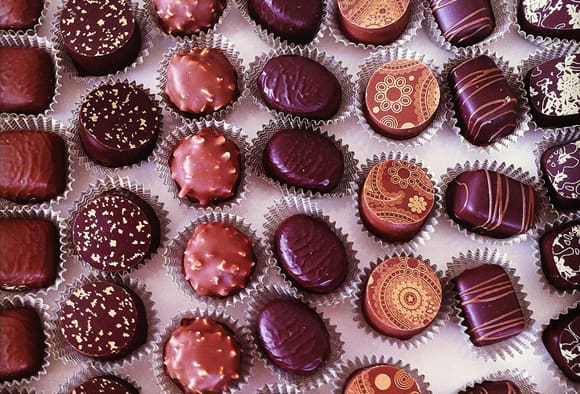 There are many different reasons people fall in love with Paris: the art and culture; the beauty and history; the fashion and femme fatales. Moi? I can think of no bigger, better, more divine seductress than the chocolate.

Cocoa is the food of the gods, and the French unabashedly worship at its altar. For nearly four centuries, they’ve been evolving the humble brown cacao seed into something decadent, transporting and otherworldly. You can get chocolate in liquid, molten or frozen form. Sculpted into a stiletto—or a squirrel.

As a single-origin bar (tablette) or a decadent box (un ballotin) of many splendored flavors. In fact, in Paris you can toss a truffle in nearly any direction and hit a chocolatier. But don’t leave it to fate. Get yourself to any of these 11 chocolatiers for an unforgettable Parisian experience.

La Maison du Chocolat
225, rue du Faubourg St. Honoré, 8eme (and other locations)
Open since: 1977
When Robert Linxe opened the first Maison du Chocolat, it was considered a gutsy move to devote a whole store to chocolate. But thank goodness he did. Now known the world over, it’s hard to dispute the divine quality of the House’s rich and delicate plain or flavored ganaches, the exquisite perfection of the chocolate tarts and éclairs, or the influence Linxe has had on other chocolatiers.

What’s to love: The simplicity and purity of the plain and flavored ganaches—they are what put La Maison on the map in the ’70s and ’80s. 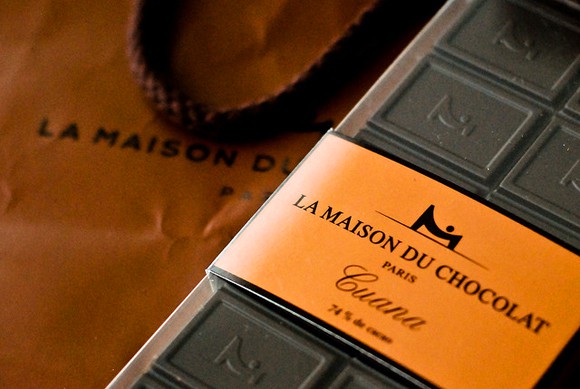 Debauve & Gallais
30, rue des Saints-Pères, 7eme
Open since: 1800
The oldest chocolatier in Paris fittingly has an old-school feel to it. Walk into the boutique and you’ll encounter the original semi-circular counter covered with trays of bonbons, like the chataigne, chestnut paste infused with rum and covered in dark chocolate, and the craquelait, a praline with crushed wafers enrobed in milk chocolate. Founded by a chemist (Sulpice Debauve) and later joined by his nephew (Antoine Gallais), Debauve & Gallais was once the official chocolatier of Louis XVIII, Charles X and Louis Philippe, and is now a protected landmark.

What’s to love: The Pistoles de Marie Antoinette—crisp discs of chocolate that were meant to mask the taste of medicine for the queen and which the French today still swear have medicinal benefits. 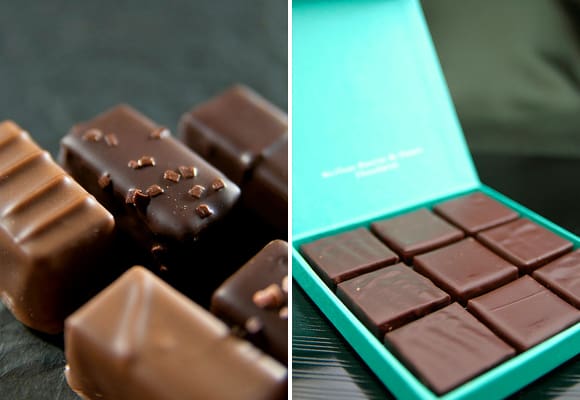 Michel Cluizel
201, rue Saint-Honoré, 1er
Open since: 1987
One of the first chocolatiers to process his own cocoa beans, Michel Cluizel and his family (his daughter, Catherine, runs the rue Saint-Honoré boutique) seemingly live for chocolate. Since apprenticing with his own pastry- and chocolate-making parents in 1948, Michel Cluizel has gone on to become one of the world’s most respected chocolatiers, with a chocolate museum in Normandy in addition to his Parisian boutique that offers everything from bean-to-bar tablettes to marcolats, dark chocolate shells filled with almond and hazelnut praline.

What’s to love: The single origin chocolate bars that let you experience the specific taste of a bean’s origins. 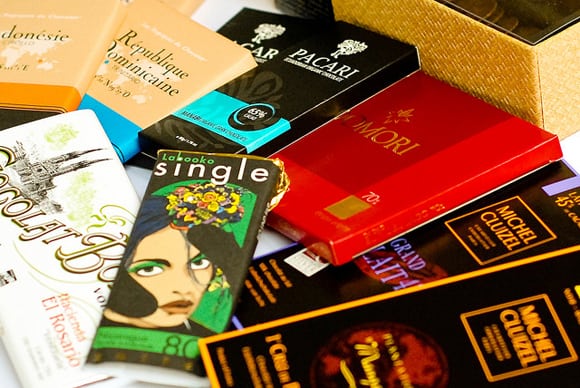 Un Dimanche à Paris
4-6-8 Cour du Commerce Saint André, 6eme
Open since: 2010
The cacao pod doesn’t fall far from the tree—especially in the case of Pierre Cluizel, son of Michel, who opened this “concept store,” which is a boutique/salon de thé/lounge and lab. He uses his deep wells of choco-prowess to offer ganaches that are sublimely creamy and flavorful, pastries that are miniature works of art, cocoa-inspired restaurant and cocktail menus, as well as baking ingredients for those who want to try to make their own magic at home.

What’s to love: Amongst the très français éclairs and macarons, don’t miss American goodies like chocolate chip cookies and brownies. 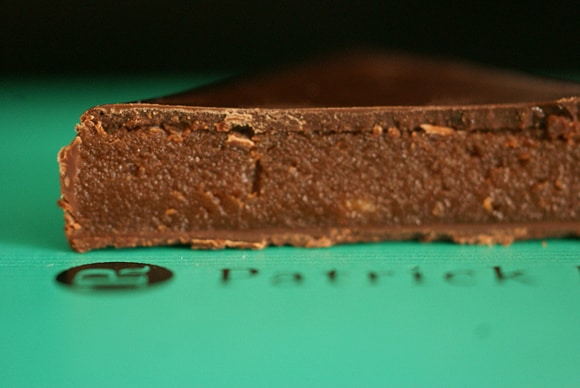 Patrick Roger
108, Boulevard Saint-Germain, 6eme (and other locations)
France’s daring, dazzling chocolatier Patrick Roger made a name for himself in 2000 when he was anointed the Best French Artisan. And what with his delicate lime ganache bonbons, instantly recognizable turquoise packaging, and over-the-top chocolate sculptures, it’s a title he’s earned every year since. 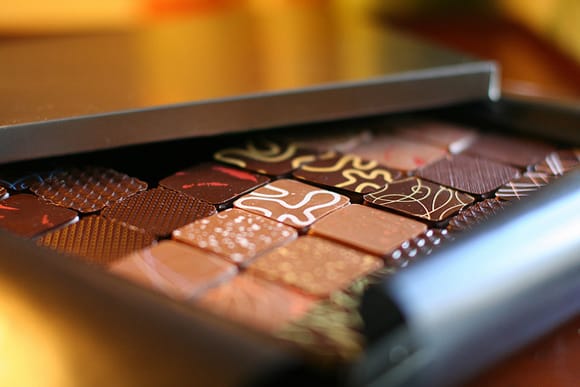 Jacques Genin
133, rue de Turenne, 3eme
Open since: 2008
Caramels, éclairs, millefeuilles, Paris-Brests—there is seemingly nothing Jacques Genin makes that’s not divinely delicious, and we haven’t even begun on his chocolates yet. Displayed in his Haut Marais boutique like jewels, his dainty square ganaches are made fresh daily, handled with respect and packaged in beautiful tin boxes. Choose from simple yet sophisticated flavors like mint, raspberry, basil, cardamom and Szechuan pepper.

What’s to love: Sitting in the contemporary salon de thé to enjoy a pitcher of chocolat chaud on a cold winter day.

Jean-Charles Rochoux
16, rue d’Assass, 6eme
Open since: 2004
Jean-Charles Rochoux packs an unbelievable amount of options into his tiny Saint Germain boutique. Most noticeable are the chocolate sculptures of busts, animals and alphabet letters that fill the shelves. And then there are the bonbons. Ganaches and pralines abound, and the truffle selection is especially impressive. Choose from flavors like blackcurrant, basil, peppercorn, rose and his signature, Maker’s Mark.

Christian Constant
37 rue d’Assass, 6eme
Open since: 1970
Award-winning chocolate authority Christian Constant (no relation to the amazing chef in the 7eme) travels the world to source exotic ingredients like ylang-ylang from Mayotte, cardamom from India’s Malobar Coast and vanilla from Tahiti. The result? A heady selection of spicy, floral and herbaceous bonbons that are as refined as the sixth arrondissement boutique from which they come.

What’s to love: The boutique’s huge selection of tea, along with orangettes, chocolate-covered slices of Sicilian mandarin orange. 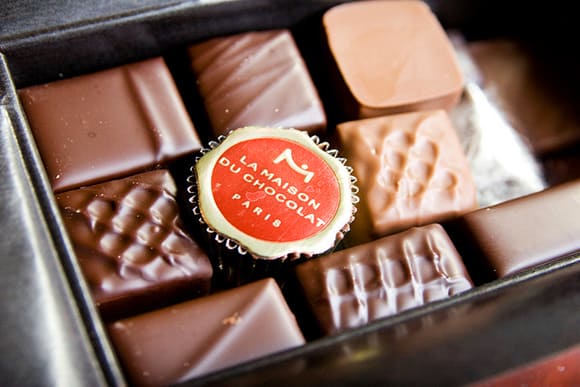 Michel Chaudun
149 rue de l’Université, 7eme
Open since: 1986
After toiling at Lenotre and spending 16 years at La Maison du Chocolat, Michel Chaudun ostensibly couldn’t go any bigger. So he went in the opposite direction, opening a wee shop in the seventh where he makes small batches of chocolates by hand. Like Patrick Roger and Jean-Charles Rochoux, Chaudun demonstrates his artistic talents by sculpting chocolate items such as watches, horses and Hermès Kelly bags, making the boutique a feast for the eyes as much as the belly.

What’s to love: His luscious pavés: sugar cube-size squares of cocoa-dusted ganache that you let melt on your tongue a little before biting into the rich creaminess.

Franck Kestener
7, rue Gay-Lussac, 5eme
Open since: 2010
Like many of France’s best chocolatiers, Franck Kestener comes from a family of boulangers-pâtissiers and started apprenticing at an early age. This no doubt propelled his career as a pastry chef for the French president in the Elysée Palace and a chocolatier for Jean-Paul Hévin and La Maison du Chocolat. Now the Meilleur Ouvrier de France-winner crafts his own irresistible flavor combinations like mint and lime, pear and saffron, olive oil and bay leaves. 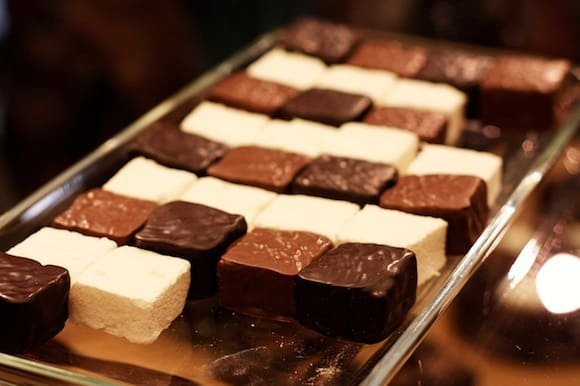 Jean-Paul Hévin
231, rue Saint-Honoré, 1er (and other locations)
Open since: 1986
Needless to say, with a list like this, it’s difficult to declare one chocolatier your favorite. But, if pressed, I’d have to say Jean-Paul Hévin is mine. It could be his salted milk chocolate tablette. His tins of dark chocolate mendiants. His award-winning chocolat chaud. Or his rich-light-tart Choco Passion gateau. It could be any and all of those things and that his chocolates possess that certain je ne sais quoi.

What’s to love: Anything and everything.

14 comments on “Why Visit Paris? For The Chocolate, Of Course”

Everyone raves about Bruges or Brussels being the home of chocolate but I think France tops the list. The best chocolate I have ever had has been in little chocolate boutiques in Paris. So good!

Wonderful article, linked it to my blog.

Thank you for sharing.

Such great recommendations! I really want to check out all the places on the list — especially Patrick Roger. Chocolate polar bears? I love it!

Thank you for this list! I will be visiting Paris for the first time in Nov. I am counting down the days…
So glad I discovered your blog. I have a lot of posts to read!

MIAM! I haven’t yet tried them all (Jacques Genin is way too close to my apt), will do so as soon as possible! Thanks for the tips my fellow chocoholic!

@Amy: thanks for catching that!

I go to Paris for the cheese but hey, pick your poison

I spent alot of money on chocolate when I was last in France and loved every bit of it! I much prefer it to Swiss or Belgian Chocolate.

Thank you, thank you for this list! I am finalizing my itinerary to Paris in a few weeks, and This is exactly what I’ve been looking for. 🙂 Merci!

My personal favorite is Debauve and Gallais. They are not always super warm and fuzzy but the chocolate is amazing.

Our apt on rue de Grenelle was just blocks from Christian Constant .. heaven.