We at HiP Paris have been big fans of Nichole Robertson’s work for quite some time. She is now one half of the wife-husband duo Obvious State, creating literary-focused posters and some of the most gorgeous Paris photo-story books you can imagine. Nichole shares an introduction to The Paris Journal with us below, as well an excerpt from the book. We are also thrilled to be giving away copies to five lucky readers! More details on the giveaway below. -Erin 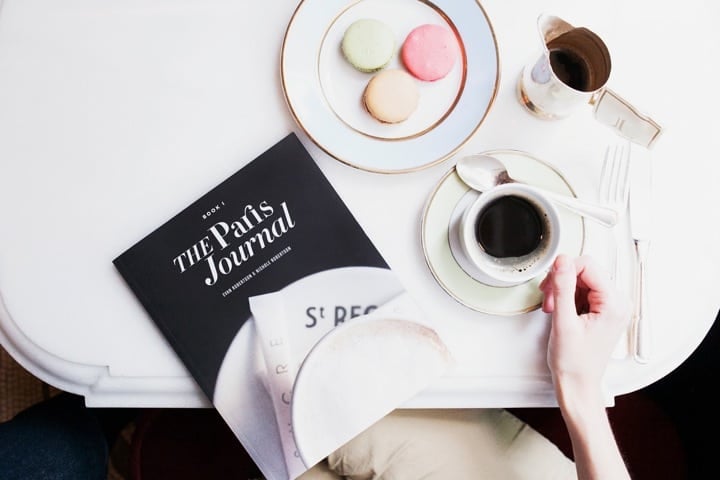 “The Paris Journal is a labor of love. From the beginning, we had one mission in mind: To take people to Paris. The narrator is an anonymous traveler and we get to follow along as she explores the city she loves. Book one is comprised of 17 journal entries and over 144 full-color photos exploring the two islands at the heart of Paris, the Île de la Cité and the Île Saint-Louis. Below is a sample from the book. I hope you enjoy it!” -Nichole Robertson

Outside of Café Saint-Régis, which faces the bridge from the Saint-Louis side, the staff prepares for the morning customers. It’s chillier here. The sun won’t reach the interior of the island for hours. The only warmth emanates from inside the café, carrying good smells with it. A waitress, clearly in charge, directs the staff as she organizes the one-shot cups on top of the espresso machine.

The two waiters drag tipsy stacks of cane chairs to the sidewalk. There’s very little street traffic on the island, but on its perimeter, the sound of cars and mopeds steadily builds. Morning has arrived, and everyone moves quickly now. 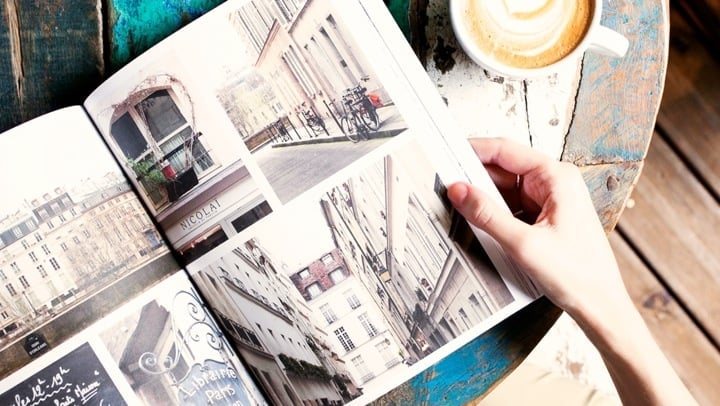 The waitress comments on the cold as she readies the tables with ashtrays and menus for the earliest guests. She heads back in with her empty tray, passing one of the waiters who is carrying salt, pepper and sugar. She returns with a tray of vases, each with one small red carnation.

Where did the second waiter sneak off to? There. He has rounded the corner and lit up a cigarette. Rough night. With one foot against the wall he takes a long drag. I wonder what kept him up all night. Insomnia? Tolstoy? No, a breakup. Crazy Pauline again with her possessiveness and drunk dialing. 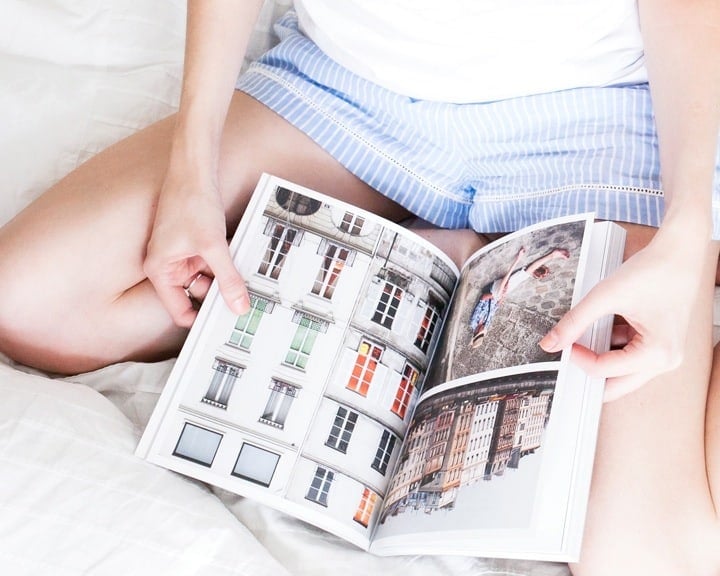 If only he knew how much the waitress digs him, but he can’t see it. She waits, just inside, with her back to him – an obvious ploy. Feigned indifference. Look how she pulls a shot from the shiny espresso machine. Look how she sips that shot as if it weren’t a metaphor for something else.

The games we play.

Across the street at another café, a potbellied man in a blue sweater hands a broom to the bus boy. He gestures to some trash in the street, and walks back toward the restaurant. The bus boy sweeps last night’s cigarettes into the gutter along with the remnants of a baguette. The food attracts a flock of pigeons. To get rid of them, he flicks a piece of bread in their direction, startling and delighting them all at once. The rhythmic scrape of the broom blends with the sounds of flapping wings as they approach again. He sends another piece flying, which sends the pigeons flying. 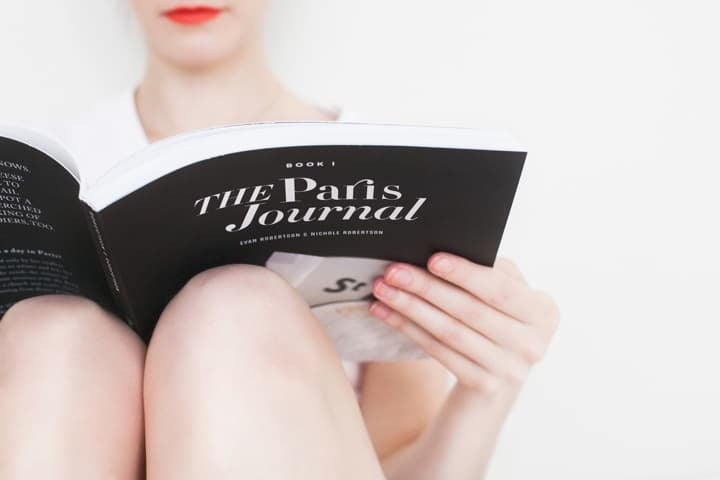 Up the street, a large green sanitation truck blasts the sidewalks clean as the washing outlets in the gutter turn on. The deluge sends even the feistiest pigeons to the balconies. But they’ll be back for breakfast. The last of the water snakes its way down the gutters taking everything with it, leaving behind the scent of fresh rain on the pavement.

Back at Café Saint-Régis, the eight chairs and four tables are filling up now. Customers settle in as the wait staff picks up the tempo. The two waiters rush back and forth, in and out of the doors, greeting each guest and passing out menus. Just above the flurry of activity, an apartment window over the café opens and a lanky man leans on the windowsill to smoke a cigarette. He looks down, nods to one of the waiters, then idly stares at the action unfolding on the street. 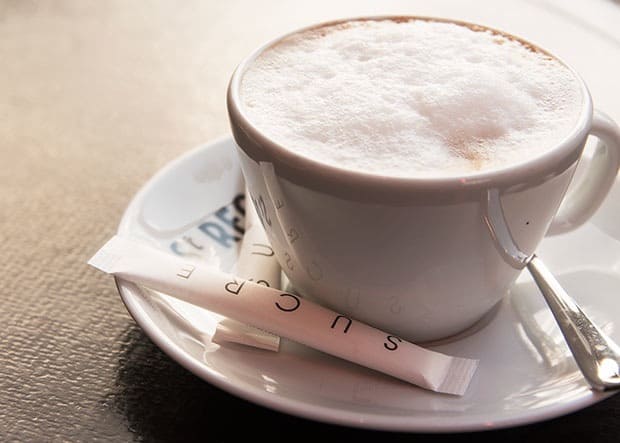 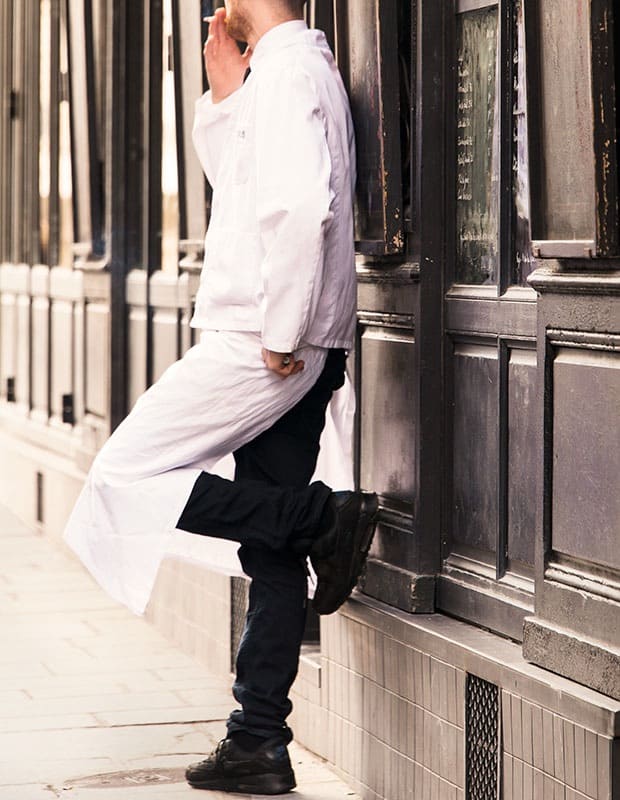 He barely smokes. The cigarette is only a timer, and the street is his therapy. From up there, he can see it all – the cafés, the patrons, the pigeons, the food and menus and drinks – for what it is: a ritual. Routines wear you down and dull your senses. But rituals connect. You to yourself, you to everyone else. No one here has grabbed a croissant and coffee to eat on the run. They sit. They linger. And whether they know it or not, they’re a part of something bigger and wonderful. It’s simple, human and holy.

And maybe that Crazy Pauline will show. Now that would be something.

HiP Paris is excited to be giving away five copies of The Paris Journal to our readers! There are three separate ways you can enter, just be sure to do so by December 21 at 11:59pm EST:

9 comments on “Nichole Robertson on The Paris Journal & Book Giveaway”

Perfect description of Paris! I will order your book so I can dream away…

This looks wonderful!! Perfect for my wanderlust!

I absolutely love Paris!! It’s my favorite city for wandering with the one you love, sitting in cafes and just people watching. I am hoping to return this summer for my 40th Birthday!!

Hi! It’s one of my favourite cities and some of my best friends are living there, so, I look forward to reading this book and enjoy remembering and imagining Paris!

That perfectly describes Paris! It took me back there, I miss it so all the time. Will have to get this!

I have the Paris Journal Book 1 and adore it. If Nichole & Evan’s goal was “to take you to Paris”, they have succeeded. Having been to Paris over a dozen times, I can’t get enough of it. Open this book and you are right back there; powerfully evocative narrative & photos.

please pick me for a copy of your book. I was lucky enough to go to Paris this summer. I’ve been planning the trip since 1978. Every day I dream of it think of it look at pictures so yes I need more Paris