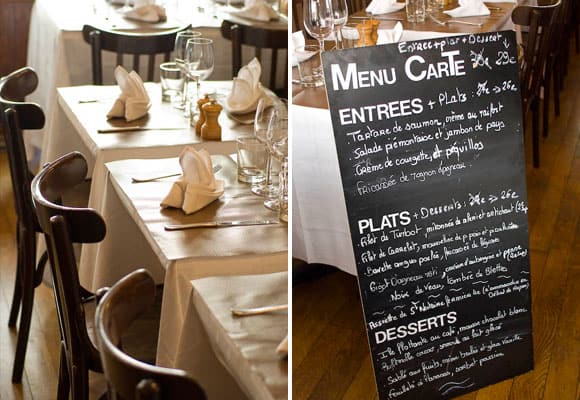 I’ve been in Paris for over a year, and I’ve wanted to dine at Le Temps au Temps almost the whole time. I’m not even exactly sure where I first heard about it. But little details stuck out in my mind: that it’s pocket-sized, that the food is playful… I think the descriptor “new wave bistro” made it in there somewhere. When an intimate dinner with two good friends—one local, one from New York—came up, I knew I had my opportunity to go.

We walked into to the (indeed, pocket-sized) restaurant and our table was a bare beacon in a crowded room. With only 24 seats, reservations are a must and I was happy to have secured our 9 o’clock spot on a Saturday night. After settling in, but before the gabfest began, I took a minute to absorb the decor. Though the space is clean and modern, Le Temps au Temps keeps some of the best Parisian bistro traditions: a couple of giant chalkboard menus featuring the prix-fixe options (€26-€29) hang on the walls along with a smattering of brocante charms, like an oversized clock. (Get it? “Time to time”!)

The environment noted and a bottle of Chinon ordered, it was time to turn our attention to the menu. The restaurant features a small selection that changes every few days, with dishes—as we would soon confirm–that are expertly executed.

There were four entrée options, five plats, and three of us at the table, so we had nearly the whole menu covered. To begin, I opted forsliced volaille in a savory,spicy sauce that reminded me of a childhood comfort dish, yet was plated more artfully than my mom ever could have managed. I tasted my friend’scream of carrot soup that had tender shrimp tails hiding within—deceivingly light and fresh-tasting, givenhow much <dairy must have been in there. But the winner between the three entrées was the salmon tartare. Though this dish is offered ad nauseam throughout Paris, at Le Temps au Temps, the fish is sliced thickly into chunks, topped with greens, and accentuated with a horseradish sauce that hit all the right notes. 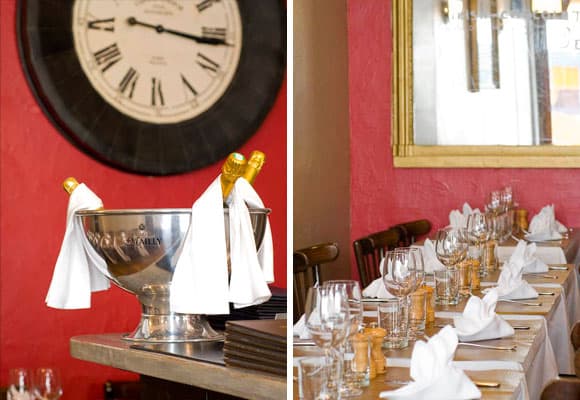 Although I secretly coveted the salmon starter, when it came to the plats, I felt like I chose the winner (I silently cheered). I’m not a veal eater, but my friend confirmed his langue de veau was divine, as were the mashed potatoes it covered. My other friend’s swordfish, which I did sample, was a thicker cut than I think I’ve ever seen anywhere, and the firm meat was deliciousatop quinoa and cauliflower. And then there was my dish. A celery mousseline, the creamiest, fluffiest bed of savoriness you could ever imagine, cradled a generous filet of cabillaud and perfectly-cooked spinach. It was heaven.

Practically licking our plates clean, we didn’t exactly save room for dessert. But since we’d had to order the moelleux au chocolat in advance, it was coming anyway and didn’t go to waste. Despite being filled to the gills, between the cake’s chocolaty molten center and the sublime banana sorbet that accompanied it, we were practically fighting each other for the last bite.

Le Temps au Temps is my kind of restaurant. As much as I love French classics—and I really do—I love modern, inventive cooking based on seasonal ingredients even more. There wasn’t anything that disappointed. Except that all the food and wine had sapped us of our plans to go out dancing afterward.

Written by Amy Thomas for the HiP Paris Blog. Looking for a fabulous vacation rental in Paris, Provence, or Tuscany? Check out our website Haven in Paris.

4 comments on “Le Temps au Temps: Worth Taking the Time”

Thanks for the great review and recommendation. I recently visited Paris and went here it was brilliant. We were looking for great quality eateries away from any tourist places and this was perfect. Managed to get a table fine, but I think that was because it was August – holiday season for Parisians. Great blog -thanks again!

I love your blog! I stumbled across it looking for all things Parisian – going there end of next month and need some advice – where to eat/stay etc!
If you have any advice, please do email me!
I’m looking forward to checking out the rest of your lovely blog for tips!
Thanks!

I wish someone would give me a good reason why I am not living in Paris right now, having dinner tonight at Le Temps au Temps ..