To celebrate the French release of Eat Pray Love (Mange, Prie, Aime) today, Amy Thomas has put together a fabulous little list of the best places to eat, pray and love your way through Paris. 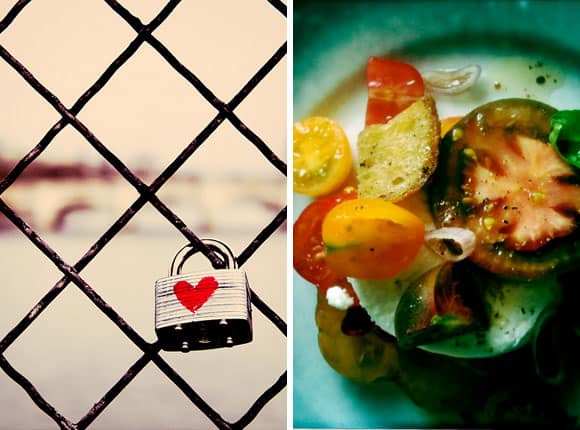 I wonder how the French will receive Eat, Pray, Love? It seems decidedly dorky and American with none of the glamor or decadence that Sex and the City, the other chick-flick import, had. Rather, just an earnest exploration of the meaning of life for a newly single, thirty-something year old.

Me? I love this sappy-pseudo-spiritual-go-sister-rah-rah sorta movie. So not only do I have a (girlfriend) date to see Julia Roberts smiling her way through Italy, India and Indonesia, but I’ve been plotting the best places in Paris to eat (yummy Italian), pray (or at least feign meditation while in downward dog) and (peut-être find) love. 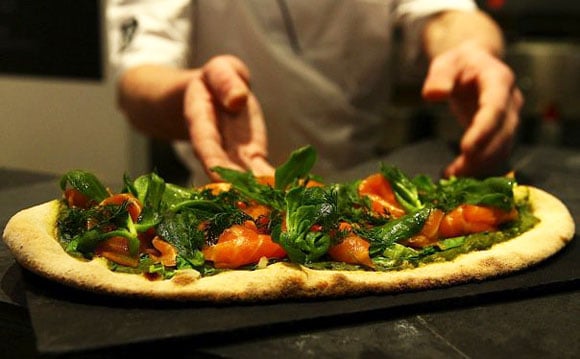 In a town that devours nearly every body part of almost every animal, it can be surprisingly tough to find a satisfying plate of pasta. So what’s a carb-loving signorina to do? Suss out the neighborhood gems. Beneath Sacré-Coeur’s shadow, you’ll find Corso (10 avenue Trudaine, 9eme, 01 48 78 55 81), a modest Costes brothers establishment that serves heaping piles of al dente pasta, homemade gnocchi with ricotta and spinach and a mean tiramisu.

It took me awhile to find a good pie here in Paris but now I have two reliable pizza places. With toppings like rocket, baby peas, and roasted eggplant, my new favorite is GreenPizz, but for a more traditional experience, go to La Briciola (64 rue Charlot, 3eme, 01 42 77 34 10). The caprese’s sweet sauce, beautiful mozzarella and modest basil leaves are pitch-perfect.

But the very best Italian I’ve had in Paris was at Caffé dei Cioppi, an itty-bitty slice of a restaurant in an alley off rue du Faubourg Saint Antoine (159 rue du Faubourg Saint Antoine, 11eme, 01 43 46 10 14). While the menu changes regularly, a few staples you can count on include fresh, creamy burrata, homemade ravioli and soupy, stick-to-your-ribs risotto. It’s cozy, well priced and frequented by Romain Duris—no wonder it received a 2009 Fooding® d’Amour award. 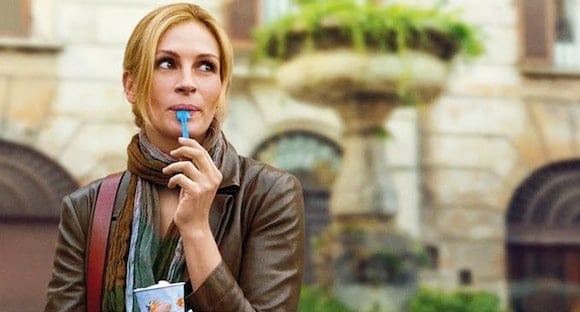 After loading up on carbs, nothing will make your jeans feel snugger than a scoop or two of gelato. With her eponymous gelateria, Mary Quarta (1 rue Charles-Francois Dupuis, 3eme) has brought her gelato-making expertise straight from Milan to the Haut Marais so you can taste la dolce vita with a cono piccolo of Stracciatella and Nutella. Sigh.

Finding balance can be a divinely spiritual or quite literal thing. And sometimes all you need in order to feel grounded is the presence of hundreds of worshiping Anglophones—which is where the American Cathedral in Paris comes in. Less intimidating than the Sunday morning Eucharist service are the informal Sundays at Six gatherings that weave world music into the religious service.

Personally, finding my center is all about yoga and thankfully, I’ve found a number of studios in which to stretch, balance and breathe myself to (relative) peace. The friendly but modest Centre du Yoga du Marais is a popular ex-pat option with variety of classes seven days a week, while on the Left Bank, Rasa also offers a range of different yoga styles, but with decidedly more swank. To find mental clarity without the physical poses, the Buddhist Center’s evening meditation classes might be your ticket—if don’t mind zenning out to the sounds of French.

Alors, here we are in the City of Loooove, where finding someone to waltz along the Seine with is a lot tougher than I ever imagined (Merci, Robert Doisneau for searing those romantic images in my mind).

Meetic, the equivalent of America’s Match.com, has been suggested by plenty a well-meaning local. Indeed, I have a colleague who just married his Meetic match. But I have a hard time committing to more dates… with my computer. It seems like real-live interaction is more promising. I mean, there must be ample testosterone at Meetup’s NFL Sunday group, right?? Or the Aussie or Brit groups are sure to have some strapping lads to consider. But since I keep coming back to the old chestnut of doing what you love, the Cook and Meet group seems more promising. I figure even if I don’t find love at this speed dating meets cooking school rendezvous, at least I’ll still be eating—and making good on one of my Julia Roberts-inspired goals.

Written by Amy Thomas for the HiP Paris Blog. For our amazing rentals in Paris, Provence & Tuscany check out our website Haven in Paris.

16 comments on “Eat Pray Love in Paris: Our Top Picks”

Ah! that little love locket is quite lovely

Thank you for some great new venues to try……xv

GREAT post! With a few of my favorites: la Briocciola and Mary’s to EAT (my Italian love them too), will try Caffé dei Cioppi, Centre du Yoga du Marais and Rasa to ‘PRAY’. (Good luck with the LOVE element, you will find ‘him’ when you least expect, trust me!)

Just saw the film, mostly for the cinematic splendor of Italy, India and Bali (3 of my favorite places in the world). That alone is worth the ride. And I too am a fan of sap 😉

Hello Amy thank you for these few words about us and our pizza concept in Paris ” Green Pizz’ “. Glad to know you appreciate our “potager”! Regards

I love this blog. I found you through Nicole’s nice blog roll she shared with her readers at Little Brown Pen. Oh I’ll be back here…often.
V

What a fun post! You make me want to go Paris ASAP. 🙂

I love this post and only which I were in Paris to try your suggestions. Enjoy the movie. I finally watched it last weekend and was very impressed. Even after reading the book, the movie drove home some lovely reminders to always keep in mind when navigating life.

By the way, I was wanting to get ahold of all of you ladies because I would like to spotlight the HiP Paris blog in my newsletter in the reader/blogger spotlight. Let me know if you’re interested. All it entails is answers three questions that revolve around luxury and will be included in an upcoming weekly newsletter with a mention and link of your blog as well. I do hope you’ll consider. You have been such great support and kind tweeters when it comes to The Simply Luxurious Life and this is the least I can do.

Great blog post. Great ideas. I must be the only person in the world not to have read OR seen Eat Pray Love. I’ve seen the hype though and know that I will see it at some stage. How sensational though would it have been if the Eat had been in Paris. I know it would have ruined the whole alliterative appeal of Italy, India and Indonesia, but you know- not go to Paris for eat?? Ah, she could have made it Il de France, India, Indonesia. Parfait.

What a great collection of wonderful places to check out! Lately I’ve been missing life in Paris – even though I’m in France and you gave me all the more reasons to move on up there. Esp for the yoga!

Oh my, so many good pizza places to try now! After the movie tomorrow night, perhaps… thanks for all the yummy rec’s.

Badaude, I’m with you. Yoga in Paris is pricey. But cheaper than losing your mind, I suppose. 🙂

I look forward to hearing how you liked the movie, we just saw it last week.
It did make me want to go to Bali .. like Tomorrow.
But instead, I asked the husband to take me back to Paris .. close enough ~

Thanks for the tip Lindsey. I did not know Caldo Freddo and will definitely check it out. My favorite Paris pizza’s are ALice Pizza rue Dancourt and Golfe de Naples by metro Mabillon. And Amy, I am excited to try your suggestions as I have not been to any of them. Yummmm!
And Cook and Meet sounds great. Let us know if you try it out Amy. Merci!! Erica

I love Rasa Yoga but why are Paris Yoga classes sooo expensive – approimately double what I have paid in the UK, even at a swanky London yoga centre…

Great tips! I’d add Caldo Freddo to the foody list for a more on-the-go type place for pizza. It is by far my favorite in Paris, run by Italians (owen is Franco-Italian) who are adamant about eggs on pizza being a purely French/North African invention (and worth scoffing at) and that spicy sauce is served in Italy only with bad pizza. It’s on rue Montorgueil just after you cross rue Etienne-Marcel. Their fresh panini’s are excellent as well!