Next week, Paris is hosting its second annual Cupcake Camp, with all proceeds going to the Make a Wish Foundation. To celebrate this worthy occasion, one of  the Cupcake Camp organizers Bryan Pirolli shares his thoughts on the difference between French and American cupcakes.  If you can find room after your croissants and eclairs this Sunday, we hope you’ll make an appearance in October 2nd. After all, it’s for a good cause! -Geneviève 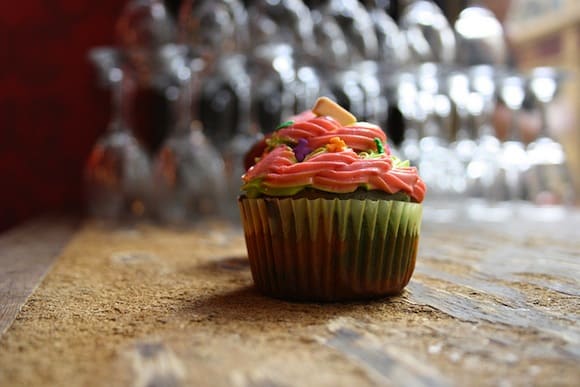 Cupcakes have slowly been invading Paris since 2008. By the time French frozen food chain (and Parisian institution) Picard started carrying them, it was pretty obvious that these trendy cakes were on the French foodie scene for good.  They are part of the same cross-cultural exchange that has resulted in the opening of legendary macaron-maker, Ladurée, in New York.

As with most things that cross the Atlantic, certain aspects of the cupcake Carrie Bradshaw enjoyed outside of Manhattan’s famed Magnolia Bakery were lost in translation… 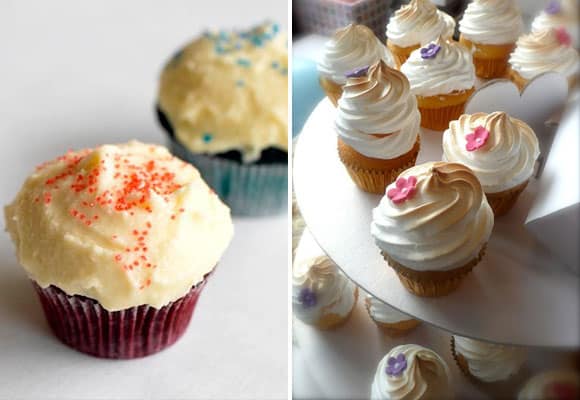 1.  French cupcakes are often served with a small fork or spoon.  Why?  Half the fun is taking a big bite and licking the icing off your fingers like you did when you were seven.  Maybe the French fancy themselves too refined to sport the inevitable icing lip-glaze, or maybe they just really like silverware.

2.  French cupcakes often have a coeur, a filling of sorts, often jam-based, that likes to escape out of the bottom as if your cupcake had a trap door.  American cupcakes, devoid of this sophisticated yet messy upgrade, must be therefore be more superficial and less spiritually concerned with what’s on the inside. 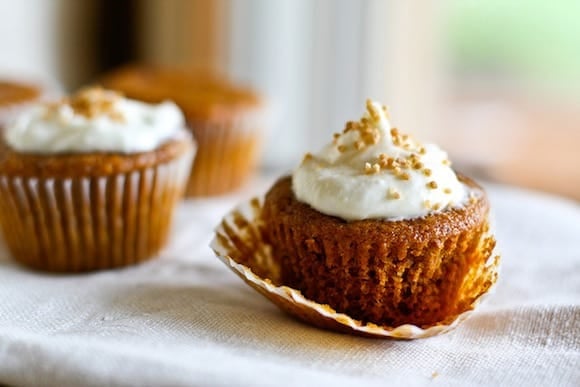 3.  French cupcakes come in a bouquet of flavors, including rose, jasmine, poppy, and violet.  The French excel at perfecting floral flavors instead of interpreting American classics, like peanut butter and carrot cake. Maybe it’s because even the French have to admit they won’t beat out an American red velvet… Although I’m intrigued by flower flavors and love to indulge in a Rose macaron once in a while, I have to admit I find them better suited to soaps and air fresheners.

4.  American cupcakes evoke childhood memories and grade school birthday parties (or a certain popular, NY based TV show). Their French counterparts, with their obscure flavors and elaborate designs, evoke exotic sophistication. Unless you grew up scooping birthday cake with a silver spoon, we warn you: it’s not the same thing. 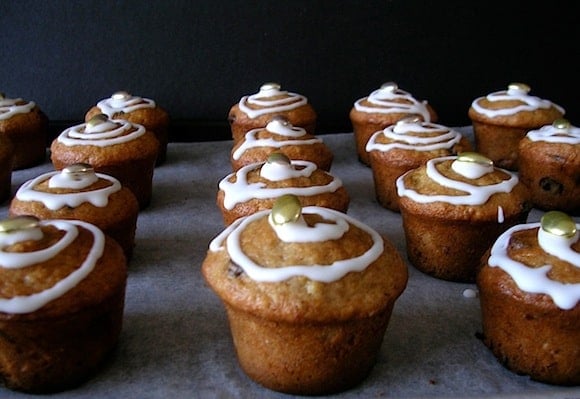 5.  American cupcakes are usually less kitsch than the Smurff or teddy bear-topped creations you’ll see in Parisian bakeries like Berko. Magnolia in New York does color a lot more frosting than its Parisian counterparts, but French bakers make up for it by going to town on sugar decorations, dried fruits, glitter, and all other sorts of seemingly non-edible decorations.

6.  Most notably, French cupcakes don’t have the overly sugary sweet icing that Americans love (and their dentists hate).  French cupcakes are more focused on meringue or cream cheese icings, and frostings that don’t call for pounds of butter and sugar (blasphemy, we know.) With over 350 cheeses to choose from, it’s easy to imagine resourceful Frenchies would think up a few of them to pair with a chocolate cupcake or two. 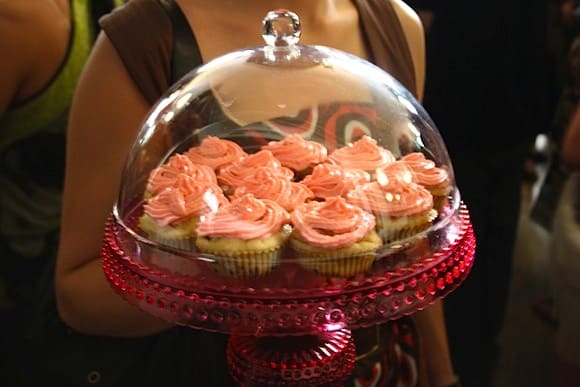 Looking to see them battle it out for a good cause? And no, we don’t mean just your taste buds. At Paris’ second annual Cupcake Camp, October 2 2011, American and French bakers meet up to share their creations and to raise money for the Make a Wish Foundation. Of course, cupcakes are available for viewing, tasting and judging. The HiP Paris blog is also an official sponsor. For more information, visit their website here. You can also order VIP passes via Colunching here.

Written by Bryan Pirolli for the Hip Paris Blog. For our amazing rentals in Paris, Provence & Tuscany check out our website Haven in Paris.

I think I would probably LOVE French cupcakes – as a child, I was emotionally and flavorfully traumatized by the overly-sweet, goopy, high-fat, high-calorie ‘cupcakes’ that were dripping with horrible, store-bought, gritty icing that was slopped onto a soggy top with an ungraceful hand. It made me hate cupcakes, and I still have an aversion to American style cupcakes – I’m constantly scraping off the tops because they’re so disgustingly saccharine-sweet.

But the French cupcakes sound so beautiful – I think I would prefer eating them with a pretty spoon and enjoying a violet or rose flavor (I like my carrots RAW and fresh, thank you), sitting quietly to myself, watching the sky. That makes them more elegant, beautiful, and demure in my eyes.

Agree with Lindsey…#2 is hilarious! Wish I could be there for this event!

It is not that the French feel themselves “too refined”; it is that in their culture, as in most of Europe, it is proper to eat a messy food with a knife and fork. Or at least the less messy way possible. Why are a lot of Americans so judgmental about manners? If you have any, you are labelled a snob!

Less sugar is also a European thing. You will not find overly sweet things too often in any part of Europe.

I’m not into the overly sweet cupcakes. Everything drowns in sugar here in the states.

I missed last year’s and this year I’m away as well!!! Mince! Hope to catch Cupcake Camp #3 next year!

I also have yet to meet a French cupcake I like.

Is number 2 (fillings) really a French cupcake thing though? I don’t think it’s only the Frenchies who are doing fillings . . . jam and peanut butter centers are the ultimate treat in the US too.

Very funny! We have fabulous cupcakes in America. (of course I have not tried a French Cupcake yet)

Hmm I may have to try using silverware.You know us Americans though, we like to have “Finger Food” and “Fast Food”!! Ha!

I must say, I am not a fan of American cupcakes. I think they are overly sweet and don’t like the traditional flavor combinations. (I think I might be the only person in America that does not like carrot cake.)
I love the french approach of exotic flavor combinations, the sophistication, the affectations and the flourishes. I love, love, love it! As far as the knife and fork debate goes, French use versus American non-use, I prefer using the utensils. The only time one looks adorable with icing on the nose is when you are two years old.

I have to admit, that after all these years, I have yet to try a French cupcake. I will most certainly be changing all of that soon!

Hmm…I’ve never had a cupcake in France. I will have to try one on my next trip to taste the difference as I fancy myself a master cupcake taster. My favorites here in America are CamiCakes and Sprinkles.

my autocorrect is out of control…

*hoping cupcake camp will change all of that…

Have yet to meet a French cupcake I loved, it’s true. Hoping cupcake with change all of that…

also, thanks for bashing flower flavors (I’m kidding of course, because I actually really like flower flavors and their WILL be violette in my cupcakes on Sunday……)

A fascinating read. I am of course always interested in debating the differences between American & French cupcakes. Have you tried the cupcakes at the hotel Shangri-la here? Delicious but really takes the art and sophistication of the humble cupcake to a whole new level! Thanks HiP for your sponsorship of Cupcake Camp Paris 2. We are incredibly grateful for your support! See you all Sunday!

ha! Love #2 – spiritually less concerned with what’s on the inside 🙂 like it. Also, French cupcakes tend to be drier – don’t ask me why. They’re doing something wrong.