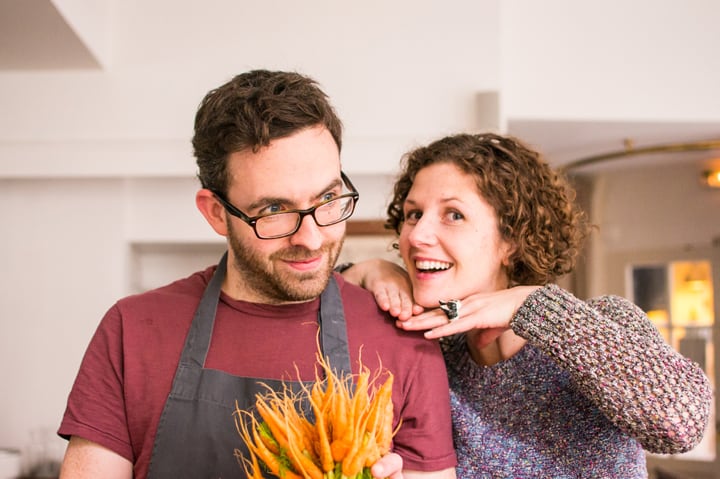 By now, everyone’s heard of Verjus and its precipitous rise into the hearts of the food-obsessed expat community in Paris from its humble beginnings as the private supper club, Hidden Kitchen. 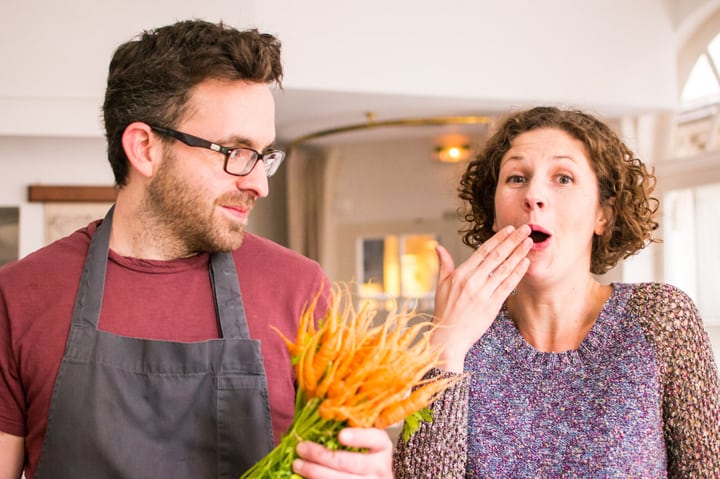 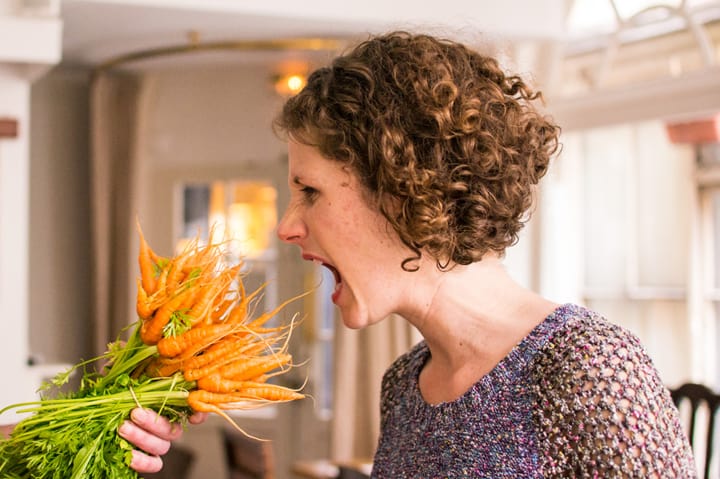 Having recently renovated the third floor of their triplex building into a private dining room for private parties of twelve to fourteen, and also having started a new lunch service, serving sandwiches to the ravenous masses, I wondered what was next for Braden Perkins and Laura Adrian, the team behind the venture. I sat down on a chilly Friday afternoon for a chat with Braden about their motivations in opening what Alex Lobrano called “the first real modern American restaurant in Paris.”

Braden and Laura landed in Paris, like many of us do, while taking a year abroad figuring out the next step in their careers. The intention was only to stay for a year or so. “So we’re here in Paris, and eating, and drinking, and traveling, but not meeting anybody. So we thought, let’s do a supper club once a month and just invite some people. And it worked exactly how we wanted it to work – we met tons and tons of expats, tons of bloggers, tons of cool people, and it was fun.” 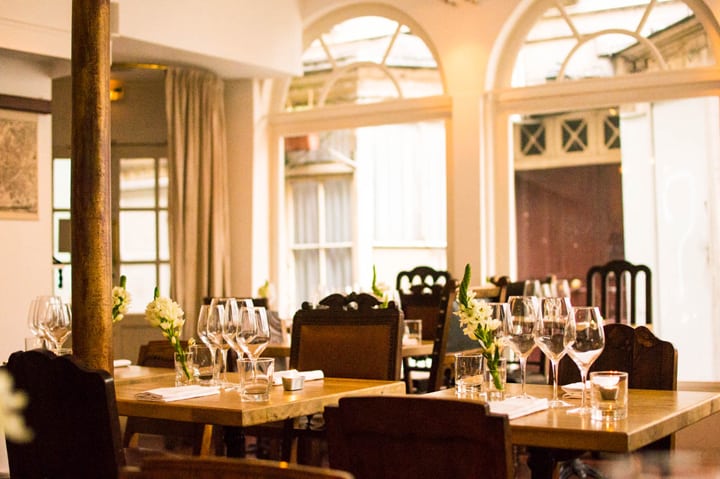 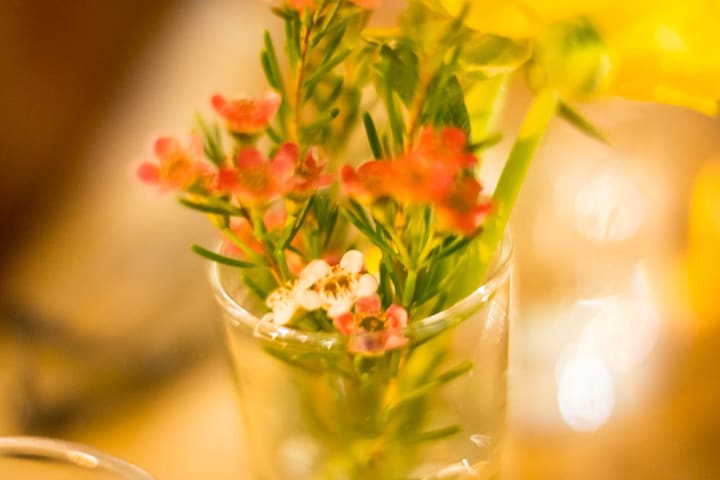 Running Hidden Kitchen also allowed Braden to start creating relationships with the farmers and producers who were providing the best product to some of the best kitchens in the city, an experience that he says is missing in the restaurant industry in the US. These relationships have continued and expanded since opening Verjus. 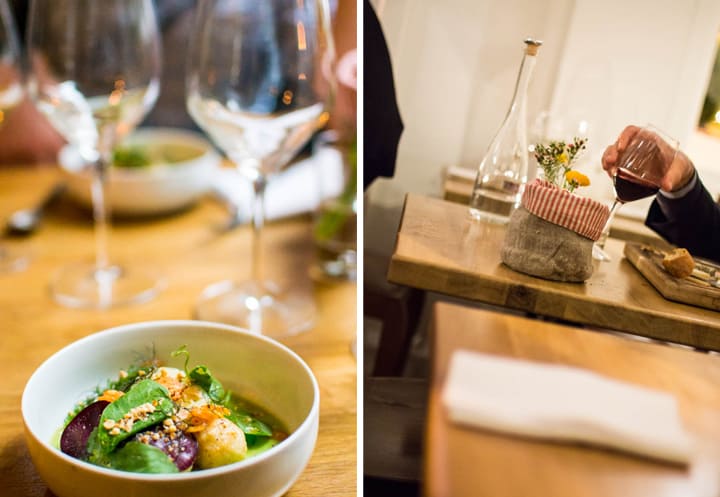 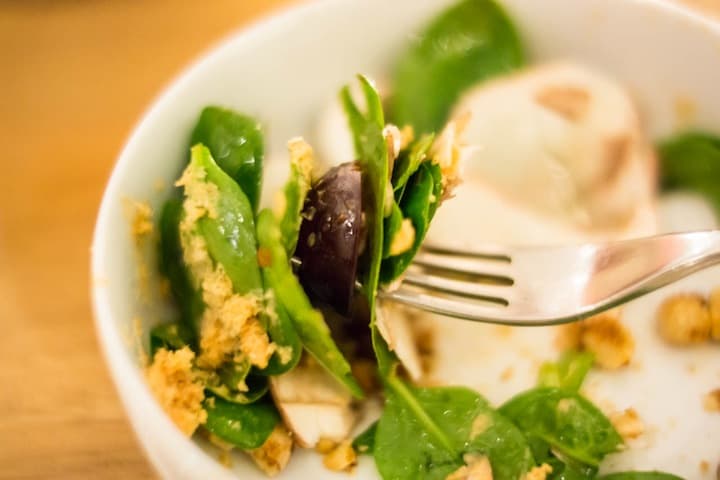 “For me, the relationships are essential. You look especially at a farmer like Annie Bertand, and her products are so bio and organic that they come and sometimes you’re not sure if she just weeded her lawnmower, but among this hippy pile of ingredients is some of the best stuff I’ve ever tasted.” 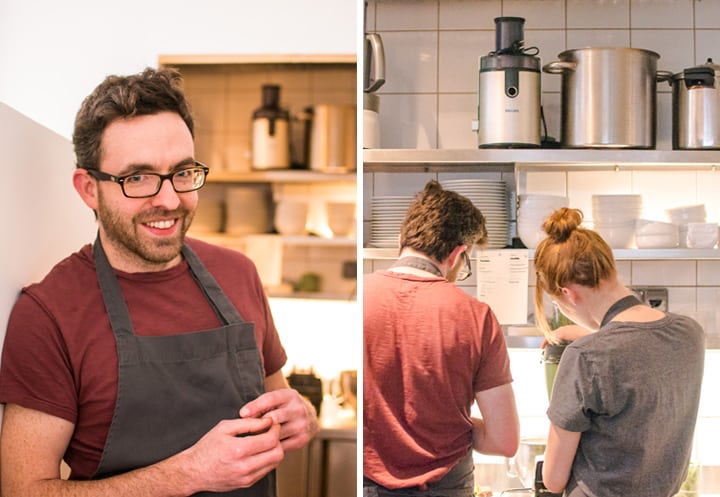 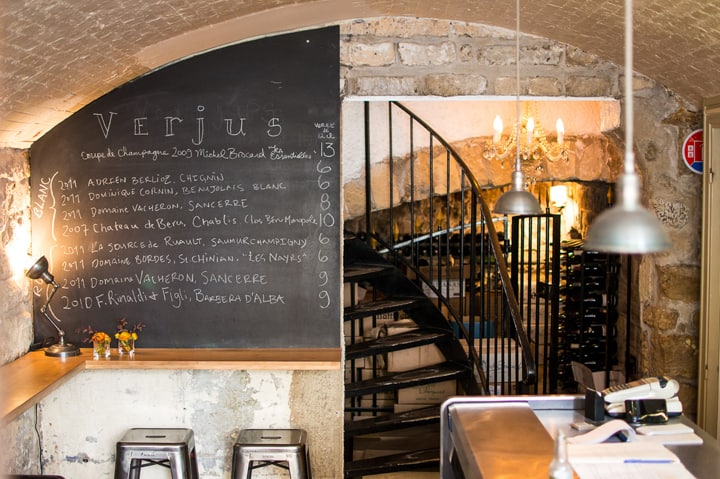 “When we opened the restaurant, I chose the price point and I chose that we were only going to be working with the best ingredients, and I didn’t feel like I needed to be explicit in telling that to the people who were coming here.” But in Paris, where it is so easy to spend hundreds of euros on a mediocre meal, restaurants like Verjus have become a beacon to those of us who care about where our food comes from. 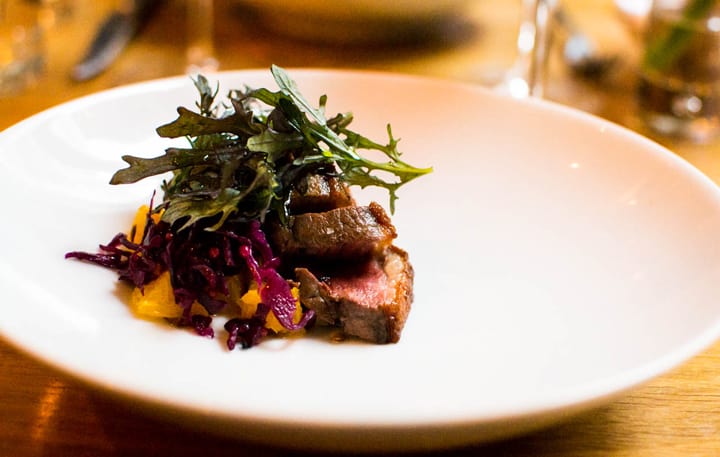 As it became clear that they were staying in Paris, Braden and Laura started considering a brick-and-mortar restaurant in the Palais Royal area. That fantastic location across from the corner of Palais Royal? Turns out they lucked into it. “We had eaten at this restaurant a number of times [and we thought it would be] cool to have a place like this, with multiple levels; it’s such a cool space, right here on the corner.” 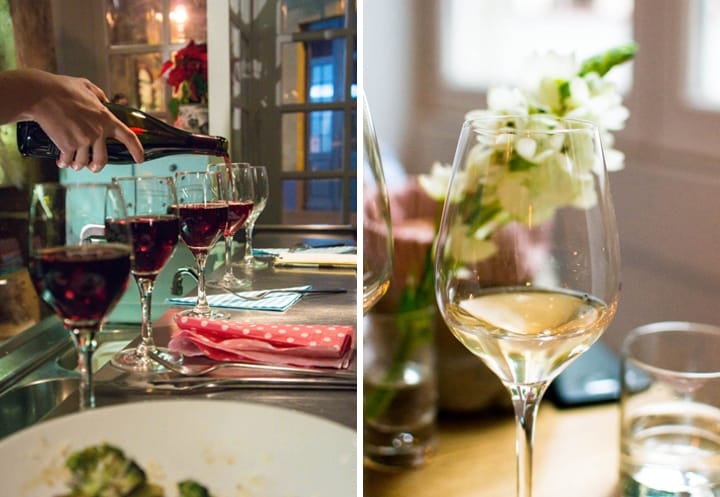 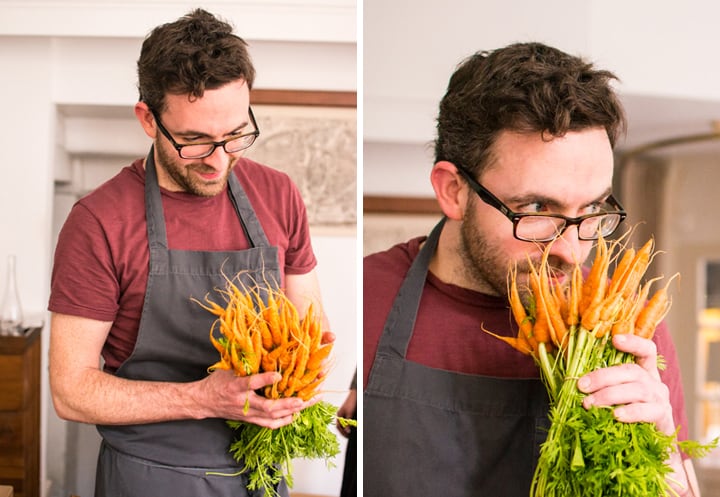 After failing to find their ideal spot elsewhere, they had given up on opening a restaurant in Paris when, four days before they were set to leave for the States, Braden and Laura received a call from a realtor. “He said, ‘would you be interested?’ and in thirty seconds I just made the decision.” Thank goodness for all of us who like to cozy up to the picturesque little bar on a weekday evening with a plate of fried chicken and a glass of wine for a good chat. 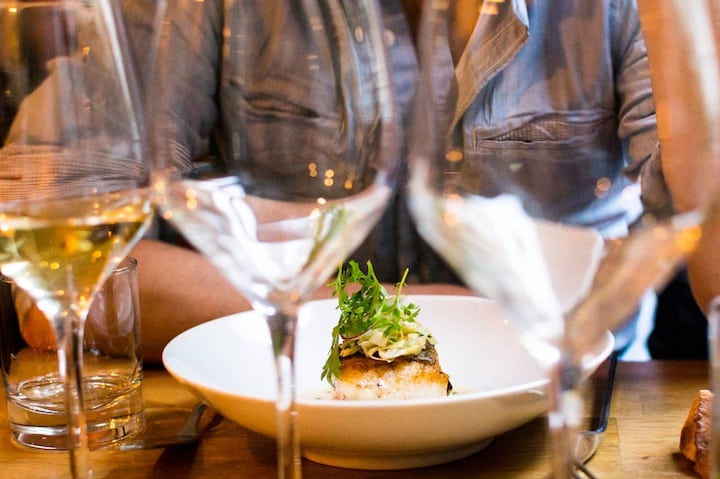 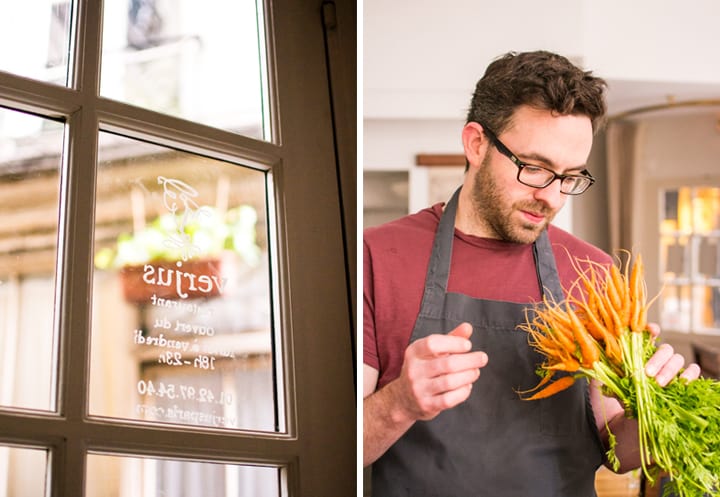 So, what’s next? Braden would like to expand on his passion for working with people who work with food to have “producer dinners” in their newly-renovated private dining room, where they would feature the products from one producer in an entrée-plat-dessert menu and possibly have the producer come to talk about their methods and their motivations. The lunchtime sandwich menu is likely to morph and expand according to the whims of the chef and the seasons. 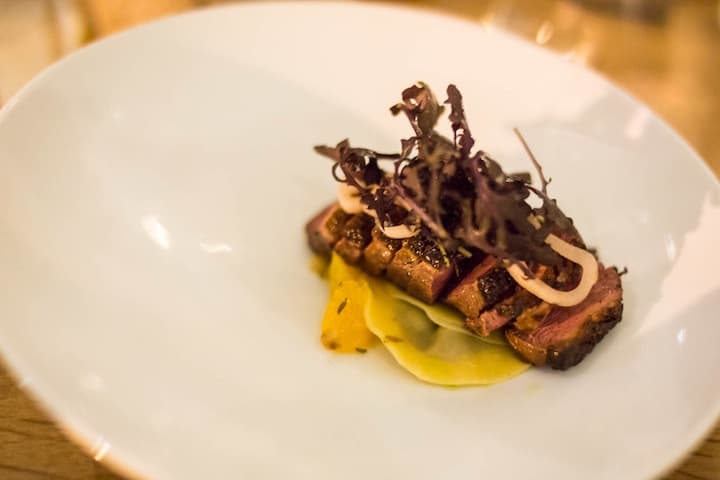 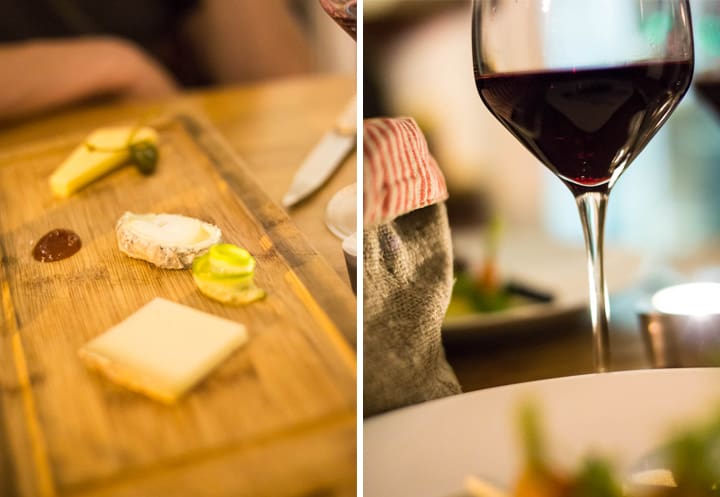 Bring it on, we say. With a chef as passionate about food and creative with flavor as Braden Perkins, we’ll be stopping by regularly to see what he and his team cooks up next. 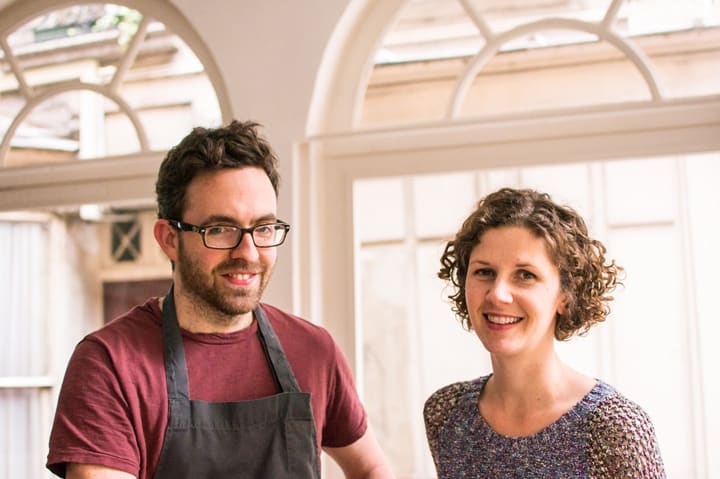 Written by Diane Yoon for the HiP Paris Blog. All images by Diane Yoon. Looking for a fabulous vacation rental in Paris, London, Provence, or Tuscany? Check out Haven in Paris.

15 comments on “Behind Verjus: Braden Perkins and Laura Adrian Bring Farm-to-Table to Paris”

We have been to Hidden Kitchen twice (now closed) and make a point of dining at Verjus at least twice on our annual Paris trips.
It’s our favorite wine bar in Paris…….Braden is fabulous in the kitchen, and Laura is wonderful at the front of the house.
Their fried chicken is better than any in the South! (sorry!).
The tasting menu is a gorgeous evening of local treats and I am dreaming of going back in September!

Had dinner here Monday night with some family & friends….simply the best meal I’ve ever had. What an experience. Loved the physical space too – clean, modern, understated. Just beautiful, and Braden and Laura seem like lovely people.

I simply love this post! I passed this little restaurant the other day but it was unfortunately closed… Now I simply cannot wait to go back with some friends and try it!!

Lovely, so excited about going to check out this place. He wonderful to hear the history of the project, they are inspirational!

I am moving to Paris in the fall, and will definitely have to try Verjus! This looks incredible! Good for him!

I love how sometimes I stumble upon blogs like this and it made my work day just that much better. The fun and realism in your photos are great!

I have heard fantastic things about Verjus, I really must go!…Great photos!…xv

Wow what an awesome experience, love these shots!

Had a marvelous meal at Verjus. Amazing! xxpeggybraswelldesign.com

Love the photos! That is awesome that they opened up the 3rd floor for private parties. I could see that as a great venue for birthday celebrations.

Recently had the most fabulous meal at Verjus while in Paris this past April. Recommended by a friend, it did not disappoint. Each item of their tasting menu was beautiful as it was delicious. A glass of wine downstairs after dinner made for a perfect Parisian evening