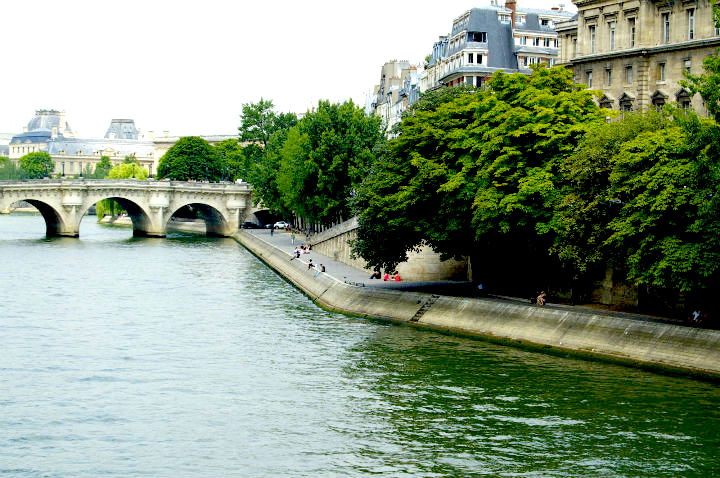 The most famous tower in Paris is certainly the Eiffel Tower. Beautiful as it may be, the masses of visitors in the summer are overwhelming. Luckily, the city is dotted with an array of intriguing towers, showcased in this little stroll traversing the historic core of Paris. 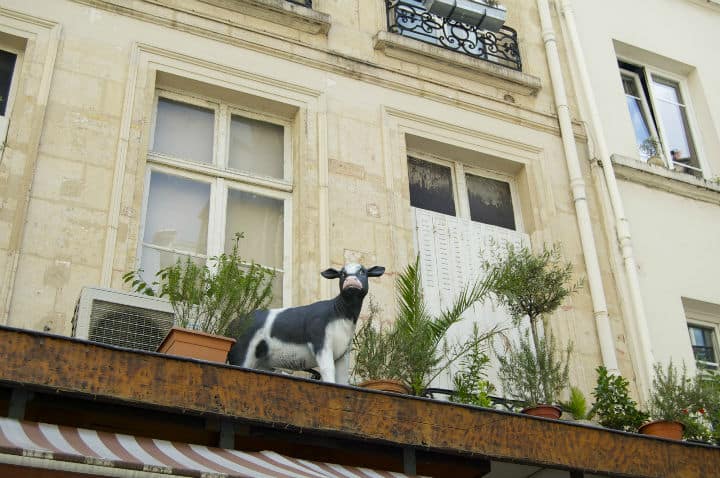 Start with the Tour Jean-sans-Peur. Finished in 1411, it’s the last remaining structure of the palace of the Dukes of Burgundy, which extended over the neighboring streets. At 21 meters (69 ft) high, it’s also the tallest medieval civic structure in Paris. You can gaze up at any time of day or climb to the top during the summer, Wed-Sun from 1:30pm – 6pm. 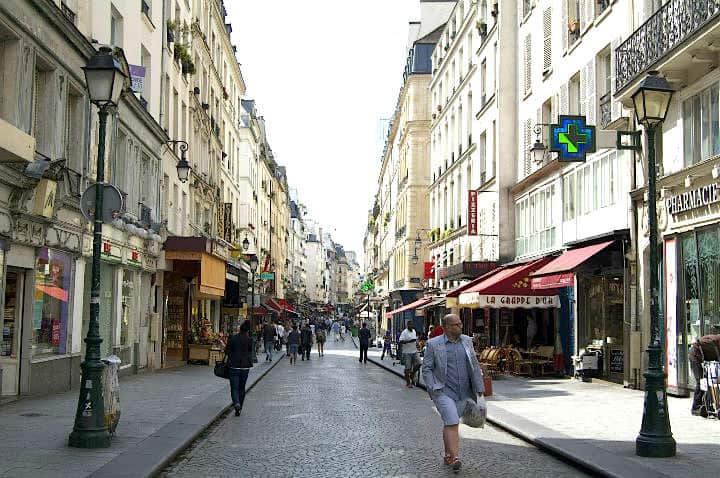 Leaving the tower, make your way to lively rue Montorgueil, lined with excellent food shops and cafes. If the weather is nice, opt for some frozen yogurt at the new branch of Chacun Ses Gouts. Here you can make your own frozen yogurt “sundaes,” composed of weekly changing flavors and toppings of fresh fruit, nuts, candy, and more. Devour yours around the corner, lounging in the newly revamped Les Halles Gardens. Here you can also take in the unfinished towers of the Saint Eustache, one of the largest churches in the city.

Then, before leaving the area, scout out the back of the domed building, la Bourse de Commerce, which is the former grain hall of the Les Halles market. From here you should be able to spot an oddly placed column. Once connected to a palace which stood here, this column was the lookout point where Queen Marie de Medici’s astrologers, including Nostradamus, observed the 16th-century starry skies to develop their fateful prophecies. 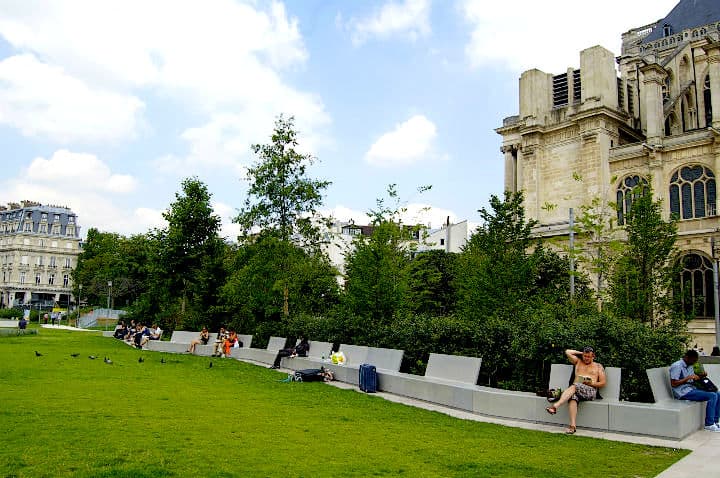 Weave your way through the gardens and down to rue Saint-Honoré, take it left, and at the very end you’ll reach another ancient tower, the Tour Saint-Jacques. If you’ve regained your strengths from climbing the first tower, it’s well worth tackling this early 16th century gothic masterpiece as well. It’s exceptionally open to the public over the summer (until Sept 28) and offers awe-inspiring views of the surrounding areas (reservations recommended and available online at this link). If you’re in need of some icy relief, take a small detour to Gelati d’Alberto, a stone’s throw away from the tower, which serves tasty and authentic Italian ice cream. 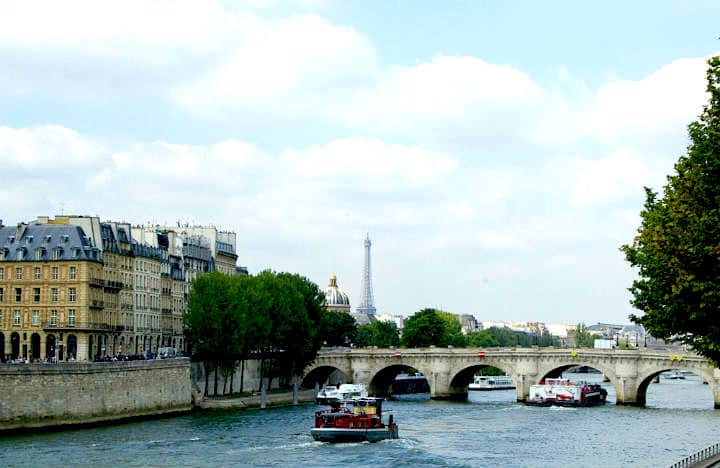 Around the corner is Place du Châtelet with its gracious Fontaine du Palmier. Commissioned by Napoleon I to provide clean drinking water to the area’s residences, sphinxes guard its base and a laureled Victory adorns the top of the column. Head towards the Pont du Change bridge where, at its corner, one of the nicest views of Paris – featuring the Eiffel Tower itself – can be admired (without having to push through the crowds amassed at its base).

On the other side of the bridge is another sort of tower: the clock tower of the Conciergerie. The first public clock in Paris was installed here in 1370, later replaced in 1535 with the current one, which has also been recently restored. Look up to its peak and you’ll see the traditional medieval tiles, a nice re-addition from the renovations. 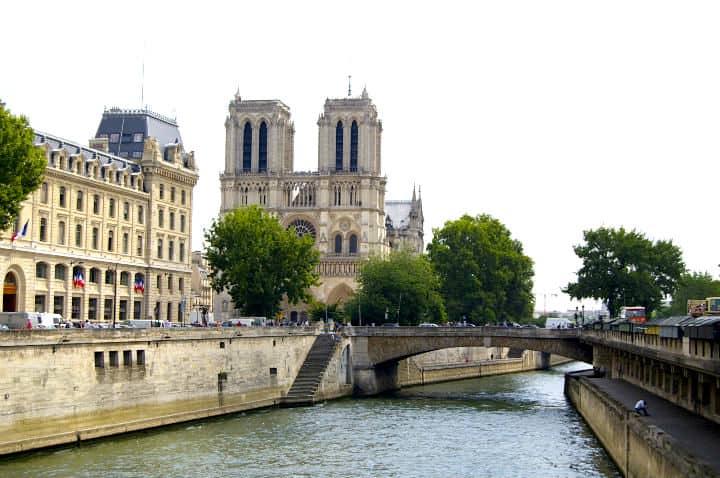 Keep going south and after crossing the next bridge and take a quick peek to your left for a nice glimpse of Notre Dame and “Quasimodo’s towers.” On the right side of the Place Saint-Michel, take rue Saint André des Arts and you’ll come to the charming Cour du Commerce passageway. Mostly known for the oldest café in Paris, le Procope, and connections to revolutionaries, you can find even older history, and the oldest tower of the tour, by peering into the window of Un Dimanche à Paris. The rounded wall is what’s left of one of the defense towers of the Philippe Auguste wall, dating back to 1210. You can either end your stroll with a well-deserved treat inside its tea salon, at one of the nice terraces around the corner on rue de Buci, or at From, another excellent spot for amazing Italian gelato. 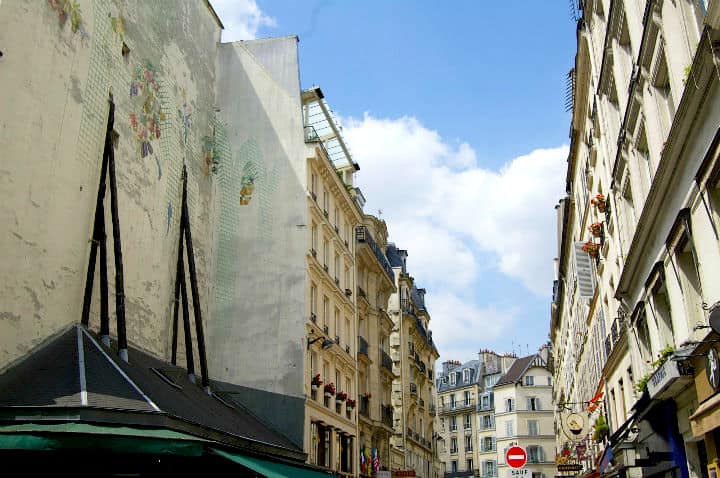 Written by Lily Heise for the HiP Paris Blog. Images by Isabel Miller-Bottome. Looking for a fabulous vacation rental in Paris, London, Provence, or Tuscany? Check out Haven in Paris.

One comment on “Strolling Through Paris, Part II: A Tour of Central Paris’ Historic Towers”