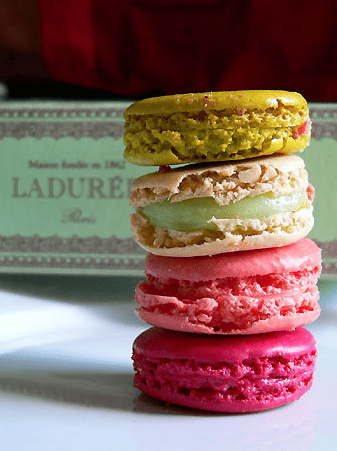 If you’ve spent even a small amount of time in Paris, you know that the macaron is ubiquitous. And in a city of fastidious eaters, it’s significant that a single dessert has managed to win the hearts and minds of so many. But the debate rages on: who produces the best macaron of all? While Dalloyau and Lenôtre both make a commendable run at it, everyone knows that there are only two real contenders.

In one corner, we have the elegant and established Ladurée, which has been turning out sweet confections since 1862. And in the other corner, we have upstart Pierre Hermé, the enfant terrible of the dessert world who worked at Ladurée before setting out on his own. (Word on the street is that the “oppressive” traditions at Ladurée were preventing him from exploring the crazy flavor combinations for which he is now world famous). Naturally, we wanted to get in on the debate, so Sarah (another Hip Paris blogger) and I gathered some friends last week for a comprehensive taste test. Two boxes of macarons later, we reached a nearly unanimous verdict! 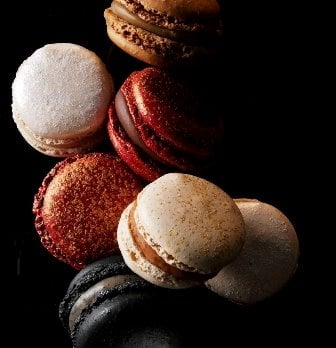 In the chocolate category, Pierre Hermé blew Ladurée out of the water. The flavor was far deeper, the texture smoother, the overall experience significantly more heavenly. Pistachio went pretty much the same way. But then we came to the most contentious category of all: caramel beurre salé (buttery salted caramel). 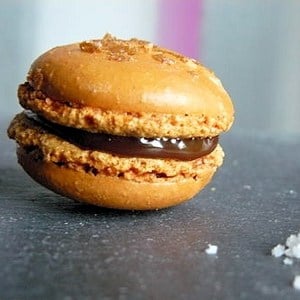 This flavor is no joke in France. You’ll see some variation of it on nearly every dessert menu in Paris. In other words, this category is make-or-break. Initially, Ladurée lured us, as the filling of their macaron has actual caramel in it. Nice touch, but we decided the overall effect was a bit too sugary.

In the end, Pierre Hermé pulled through yet again. His filling is more buttery than caramel-y, but the overall experience is balanced and, to my palate, quite other-worldly.

So there you have it! Pierre Hermé comes up big in every category. Don’t get me wrong: I’m not going to refuse a box of Ladurée macarons if one happens to show up on my doorstep. But in a macaron head-to-head, my money is on Hermé.

So readers, what do you think?

I wish I had come across your blog when I visited my family last year. I was determined to go for the original macarons, you know the bland hockey puck looking kind that are found at Jean Trogneux. But as a photographer I found myself lured by the beautiful macarons that Patrick Hermans had to offer in Vieux Lille. They were delicious but it was the very first time that I had tried any so I will have to add such a taste test comparison on my next visit to France. Here are the photos of the ones I tried: http://wp.me/pvFep-ik

I’ve been in Paris this week. Hermé macarons seems to me better than Ladurée’s. In London, last year, between Harrods and Selfridges I was thinking the opposite. The truth is that the expectations and the circumstances are the real rulers of our opinions. And I was not hungry. Nowadays I don’t like macarons

Definately Pierre Herme! Also for all the cakes I would actually wouldn’t mind to eat every day 😉

I have to say that PH wins hands down. I loved his Violet macaron and the Chocolate and Passion Fruit is to die for!

I’m with the PH crowd. Absolutely love. Last spring, my favorite was the Violet one. And I always the chocolate and passion fruit. It’s something about the mix of flavors that does it for me.

I unfortunately haven’t had the chance to try Ladurée macarons (YET!) but I have to say the caramel buerre salé macaron at Pierre Hermé is magical. Up until that point, I have not been a fan of caramel, finding it too sweet and cloying, but the bitter undertone of the caramel was perfect. Now, I find myself wanting more and more caramels and caramel desserts, all because of the that little dessert.

a friend was over in Paris on a business trip and came back with some Pierre Herme and i got a box of assortments.
and i have to say…i didnt eat half of them.
some where so utterly sweet that i couldn’t even take another bite.
but the ones that were good…were really good. the pistachio and creme brulee/coffee (couldn’t tell) was amazing. but some of their fruity ones just …. too sweet.

A parisian appreciation :
Pierre Hermé definitely cannot make part of the Macaron’s United Kinkdom! Hermé is a brick of butter. Maybe nobody told him that Macaron is a cloud.

Ok so, lunch today with 3 Frenchies. We tried Pierre Hermé pistachio and chocolate versus Ladurée. It was unanimous, Ladurée wins hands down. Pierre Hermé is all about the butter. In fact, the pistachio did not even have much flavor aside from the butter and the flavor it had certainly did not seem like pistachio. The pistachio from Ladurée actually had bits of pistachios in it and their chocolate was so rich and flavorful. I was curious and now I know… Ladurée.
Note: We did not try any of the decadent fruit flavors. I see more tastings on the horizon.

So, had to do the taste test and tonight was Caramel. As it is my favorite flavor, it made sense to try it first. We tasted the Caramel from Pierre Hermé and it light, fluffy and buttery. Yummy, but too buttery. Ladurée was more dense and flavorful. Both of us agreed that, hands down, Ladurée wins for Caramel. Next up? Pistachio and then Chocolate.

I am doing my own little taste test this weekend, I cannot wait to sink my teeth into that caramel macaron at Pierre Hermé!

I think I need to hop on a plane and try both for myself!!! When I was in Paris years ago I knew NOTHING about macarons… I did have DIVINE chocolat while in Paris… but sadly NO macarons… I will not make that mistake when I return to Paris!
Only macarons that I have tasted have been from I hate to say it Trader Joe’s frozen section and from a place in Beverly Hills called La Provence Patisserie… I know it is sad 🙁
That caramel one in your photo looks YUMMY… I will definitely have to try that one… hopefully… fingers crossed… SOON!

another beautiful post, but don’t expect a personal opinion, I am not a macaron fan (oui, ça existe). I want to react to Omid’s comment :

my daughter is a fulltime journalist at rue89, and since Omid reads this innovative web newspaper I cannot help reacting to his comment. I know (being somewhat of an insider) that my daughter is on a cruisade tracking down “la malbouffe”, but sometimes she really goes overboard, she is on a mission, excessively purist at times. Ten years ago, before Holder bought it, and before Pierre Hermé hired , I had the very priviledged opportunity to visit the Ladurée Macaron lab, in the sous-sol of rue Royale. Believe me the ingredients were 100% natural and traditional. I doubt that they have switched to the long list of additives quoted by Omid.

It would be worth checking. And additives are not always as bad as they sound. That is another subject.

I’m a die-hard PH-fan, but when it comes to sweets I don’t mess around. PH has got olive oil macarons (in season), and that ain’t no small thang. Oh does my heart belong to Pierre Hermé. BUT: as for the best caramel macaron, I must respectfully disagree: at least according to my palate, Ladurée’s real caramel filling takes the cake — and my stomach — every time.

Hi All. Thanks for your comments… I’m glad we’re in agreement that Pierre Hermé is the best!

In October, I stumbled on Pierre Hermé and it is hands down the winner. Such amazing and creative flavor combinations as well as perfectly executed standards. I’m going to be in Paris for 3 months this year and one of the things I’m really looking forward to will be my weekly trip to Pierre Hermé.

I am off on a mission to check this out for myself!

What a sweet test to savour, chocolat Paris’ Macaron
must be such a dreamy confection,your delicious pictures
are making me seriously thinking about exploring
Pierre Hermé and Ladurée just because..
J’ adore Paris!

I’m really fond of (Ladurée’s) caramel au beurre salé, but now the length of the que at Pierre Hermé can not be an excuse to check out his as well….

I agree that Pierre Herme’s macarons are amazing. As much as I had liked La Duree in the past, I feel the that the chocolate and carmel from Pierre Duree cannot be beat. Cannot wait to go and get some more!

This is such a delicious debate! And I’m glad to see that someone has managed to come up with a winner. I think if I did the same thing – sat down with two boxes from the respective reigning champs – I would come up with the same KO conclusion (after a serious back-and-forth match). But still, I can’t declare myself firmly on Pierre’s side when it comes to the macarons. I am a sucker for both.

For the record, Jean-Paul Hevin makes a nice chocolate macaron. And my friend Jo swears Paul’s macarons are just as tasty as Ladurée’s…

I have to agree with you.Pierre Herme wins hands down! I am a traditionalist so I love his chocolate .Can’t wait till March to visit
and do some taste testing! Love your blog …and your flats in Paris!

I’d love to see a shoot-out based on ingredients.

Ladurée would lose on grounds of un-pronouncability, and not only because they’re in French.

How do you eat a macaron in France? I imagine in the U.S. you would pick it up and eat it by hand. Some of the bright colors seem more American than French, don’t they?

Thank you for this! I will certainly check Pierre Hermé up now! (And thank you for a great blog! Love it!)