How To Work Out Without Really Trying: Exercise in Paris 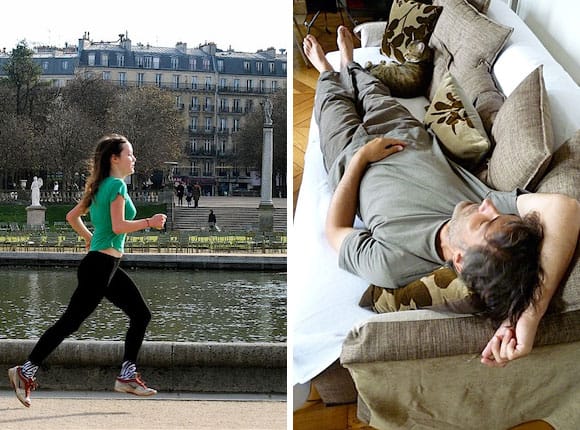 When I first moved to Paris, there was a billboard near my apartment that advertised a French chain of gyms. It pictured a somewhat wan man in a dress shirt, seated, calmly smiling but looking somewhat unsure of what to do with the small hand weight he was gripping. You could easily have Photoshopped an espresso in place of the weight, and it would have made just as much sense (if not more). This offers a telling glimpse into the French psyche, I thought.

In the United States, this type of ad usually depicts a healthy, young, tan, fit, teeth-gritting exerciser in the midst of an intense-but-rewarding workout, muscles flexing and sweat flying. The message: It’s hard, but we still do it. Or even, we do it because it’s hard.

This doesn’t fly in France, where the motto is more like: “If it’s hard (not to mention unflattering), why do it?” Why not just go for a drink instead? Take a load off. So apparently, the way to lure the French to your gym is to convince them that they need not sweat, exert themselves, lose their composure, or even change out of their street clothes. They simply have to show up.

Parisian running – possibly surprised at her own body moving! Олександр

Easy as that sounds, I’m pretty sure that the vast majority of Parisians still do not show up, or even deign to work out in private. Why bother? To stay en forme, they simply walk a lot and steer clear of over-indulgence. It’s worked for centuries; why mess with a good thing? Plus there are plenty of beauty products that claim to do what physical activity would otherwise accomplish, and paired with occasional sessions on a vibrating plate, you’re good to go.

There are a few brave souls, however, who actually jog, or shall I say, experiment with the idea of jogging. I’ve spent a fair amount of time observing them as they turn laps around the idyllic paths that encircle the Jardin du Luxembourg. (For the record, I have seen French runners who are pretty hardcore and seem to have it down). But others clearly didn’t get the memo about how to dress and behave while jogging.

Nonetheless. I have to applaud them for getting out there, even if they are wearing pleated denim pants and button-down shirts, even if they forgot to put real sneakers on, even if their arms are kind of hanging awkwardly at their sides like flippers, even if they’re looking around as if they have no idea how they got to this jardin in the first place or why their body is moving as it is—as if this was not their idea at all.

Because in a way, it wasn’t. But that doesn’t mean they can’t dabble in it—in their own French way—and then reward themselves with a cigarette. Ah, le jogging! Que ça fait du bien.

Written by Tory Hoen for the HiP Paris Blog. For our amazing rentals in Paris, Provence & Tuscany check out our website Haven in Paris. 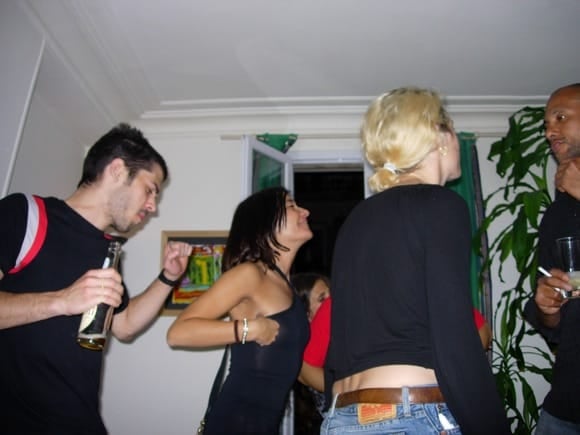 16 comments on “How To Work Out Without Really Trying: Exercise in Paris”

During my visits at the gym I noticed that most girls spend more time on their phone (If you can still have a conversation, you are not working out hard enough)or hardly moving (no sweat) while reading ELLE.. that being said,lots of people are jogging and rollerblading now!

Since moving to France, I’ve decided a gym is far too expensive and tell myself that four flights of stairs to my apartment every day is exercise. Right?!

Like Phoebe, I’m am a Francophile, but I would pay big money to see a French girl take up running – too funny!

Like Phoebe, I’m a total Francophile, but I would pay big money to see a French girl take up running – too funny!

I have to echo Sweet Freak — up in the Buttes Chaumont before 10 am there are HOT pompiers jogging! Made the one time I was up and walking through the park at that time a really nice experience. 😉

That pic of the girl jogging next to the Canal St Martin is freaking me out. I keep expecting her to trip and fall in. Why in the heck is she so *close*?

When le French boyfriend complained about his weight, I suggested that he might want to try a sport, such as tennis. “I do sports,” he said. “Walking is a sport. “

My motto also. If it’s hard, and causes sweating, why do it?

Two things worth pointing out:

1) 98% of the runners in the Tuileries are pompiers. It’s a job requirement!

2) Don’t you think the French don’t have to exercise?? They’re all skinny freaks by nature. Totally unfair.

It’s so funny, I was at my fancy gym this morning and, for the first time, noticed one of those little mechanisms outside the main door that collects cigarette butts. As unserious as the French are about exercising, they are serious about smoking! 🙂

This post reduced me to tears. Hilarious. Thank you.

Positively hilarious. I’m a Francophile by any means, but these wisecracks on French life are SO funny…love these posts!