Winter in Paris can be tough on the psyche, with one grey day following the next. But Zeva’s post (from Paris by Appointment Only) about Michel Heurtault’s amazing couture umbrellas has us doing rain dances. Who knew showery could be so chic? 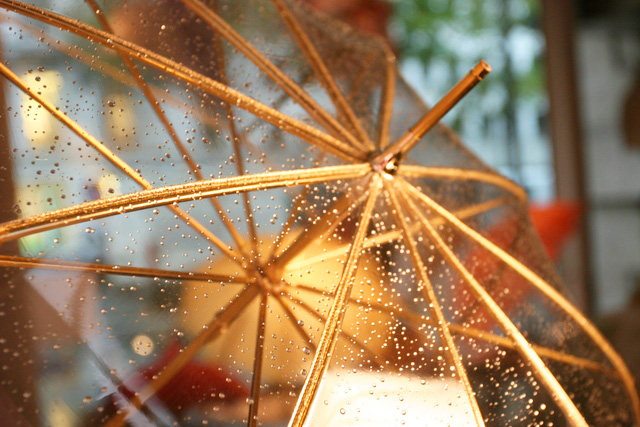 Text and Photos by Zeva Bellel

I write about some pretty unusual talents on this blog, but couture umbrella maker just might be my rarest find yet. That’s why I’m letting Michel Heurtault, owner of the fabulous umbrella shop, Parasolerie Heurtault, tell the story behind his flabbergasting art.
………….

I’ve been obsessed with umbrellas from the time I was three. I have no idea why, but I could spend hours breaking them apart and studying how they opened and closed. I collected all of the umbrellas I could find, and by the time I was eight I was repairing them for people in my neighborhood. Needless to say, my parents thought I was nuts. 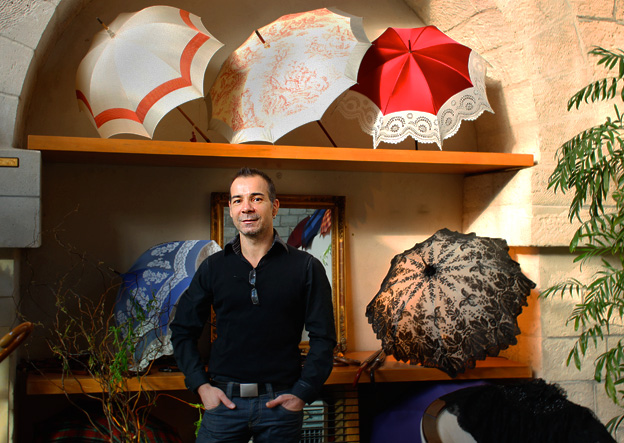 I moved from Toulon to Paris when I was eighteen and began working as a costume designer. I eventually opened my own company, Art ‘Scene, where I made costumes and corsets for film shoots, theatre productions as well as fashion houses such as Dior. I poured the most luxurious elements into my costumes. 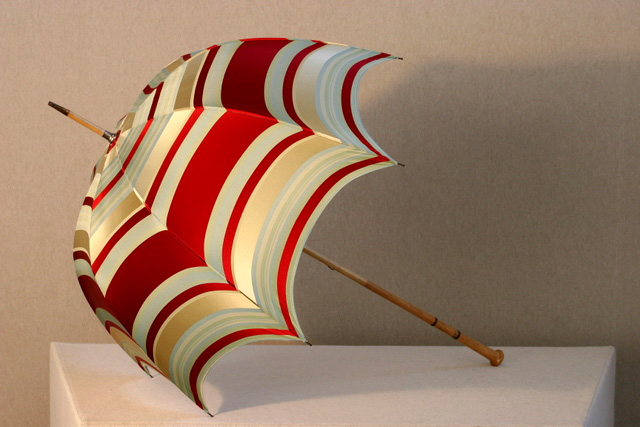 Throughout the same period, I devoted all of my free time to making umbrellas and parasols. I didn’t want to make them in polyester and plastic like everyone else, so I started researching ways to waterproof and UV-protect noble materials, like lace, cotton, silk and linen. Anyone can put fabric on an umbrella, but my signature is to use only the finest materials, experiment with the cut, and handcraft the finishes so that it becomes a striking object with a soul. 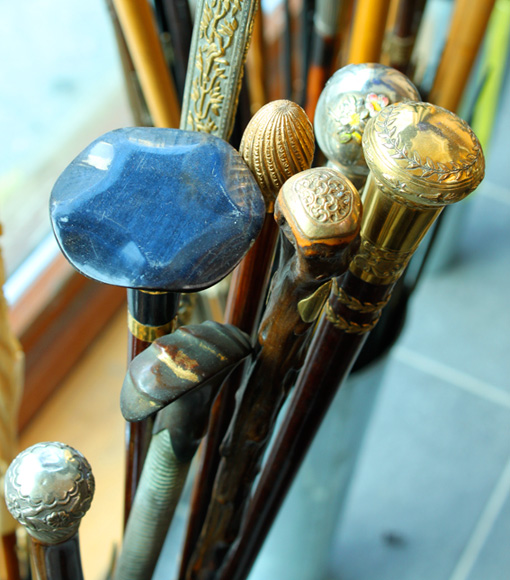 I use an 18th century machine to cut my fabric into eight panels and then bend and shape them to create the curves and silhouette of the umbrella. The fabric needs to be as taut as possible. The sound of the umbrella when it opens, the stretching and tightening until it springs into place is a sign of quality. The more the fabric flutters, the more it catches the wind like a sail, causing the umbrella to shake and break. 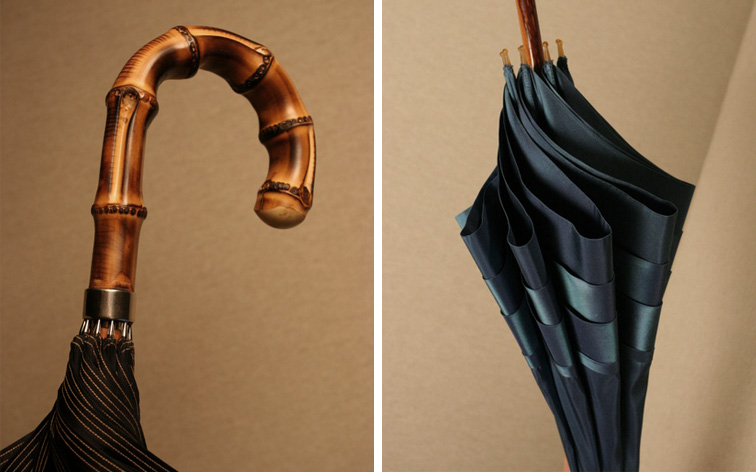 I do all of the detail and finishing by hand. I pad the ribs and smock the runners with fabric for aesthetic and practical reasons. It unifies the color of the design, prevents rusting, and helps the umbrella open and close more easily. 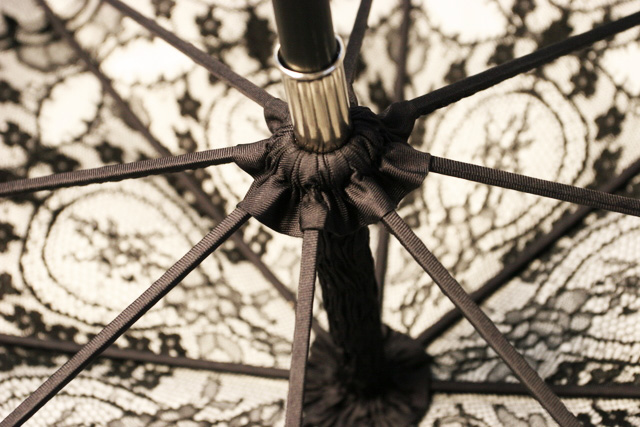 I consider the umbrella to be a fashion accessory. Not only is it a beautiful item to carry in your hand, it gives you instant attitude and allure. I’m always shocked by the number of people who spend a ton of time and energy on their ensemble, but then ruin it with a revolting umbrella. 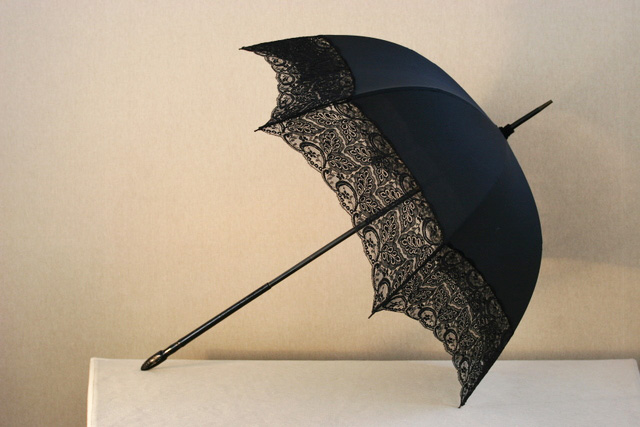 Instead of a cigarette, you have an umbrella to play with. It’s the final touch to a chic silhouette.

So many women come to me and say that they’d love to carry a parasol, but that it’s not really fashionable. And I tell them, ‘it’s not just about fashion, it’s about personal comfort.’ When you’re under a parasol you don’t sweat as much, your makeup doesn’t drip off, you’re not oppressed by the sun, and of course, it’s great for protecting your skin. 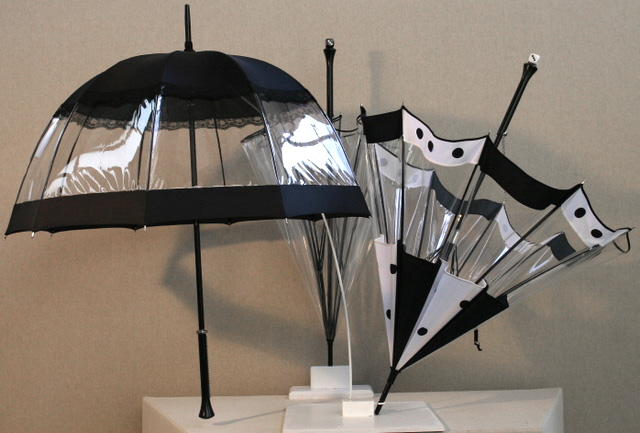 Umbrellas have been vulgarized as disposable objects. We throw away 10 million per year in France and 33 million in the USA. During your grandmother’s era an umbrella was a luxury object; you bought one every year and when it broke, you had it repaired. I’m not obsessed with the past, I’m just thinking about a future that’s ecologically chic.

I was watching The Voyager with Josh Garcia on television and was wondering if, you were the same person that appeared on that program? My niece is taking French in high school, second year and I was wondering how much it would cost to purchase one of your umbrellas? I thought it would be neat to give her something from France. I would love to take her to Paris, but unfortunately, just lost my job and would be kind of a nice gift. If you would let me know the cost in US dollars. please. Thank you.

thanks for your share ` i like it very much and In Paris, it rains a lot. Might as well weather the climate in style too!!
i love umbrellasvery much

What a great story! I love umbrellas, and the translucent one in the photo immediately floats my boat. Thanks for this find!

In Paris, it rains a lot. Might as well weather the climate in style!

What fabulous umberellas! I’d buy and ‘wear’ them every day if I could afford them! Than you for this article. Now I want to make my own!