Guess I Didn’t Really Need That Shoe After All

One of our favorite Hip Paris bloggers, Tory Hoen, also has her own blog – A Moveable Beast – on which she chronicles her more bewildering encounters with French culture. Quirky, insightful and always hilarious, we’re happy to be able to share one of her memorable meetings with the French metro here.

Now I’ve done it. This is probably a story I should bury in the “Secret Annals of an Awkward American in Paris.” But what fun is public humiliation if you can’t share it with your friends?

Yesterday was beautiful. When I woke up, there was literally a small French child singing “Frère Jacques” outside of my window. I quickly exited happy-daydream-mode when I stepped into the metro car and realized that something was not quite right. I looked down. Ah, yes. One of my shoes was missing, and I was standing in the middle of the train with one bare foot. Quite strange, really, because this foot had had a shoe on it not two seconds earlier… I was sure of it. I turned around just in time to see the little bastard slip into the gap between the platform and the train—plummeting to its death on the tracks below. 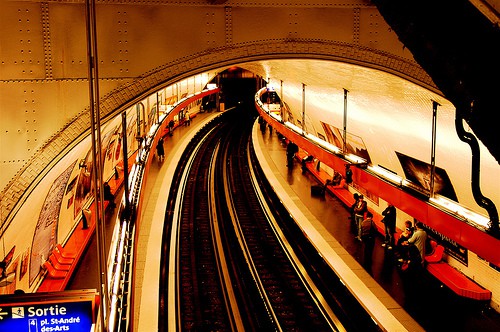 I didn’t need to gasp in horror because everyone around me on the train had already done so. So I just froze in a state of stupefied shock. Luckily, there was a go-getter next to me who pulled me back onto the platform and immediately started scheming about ways to get the shoe back. In the meantime, the conductor noticed the commotion and turned off the train, which, as you can imagine, made me quite popular with the hundreds of metro-riders within.

My shoe was down there, but it could not be reached with the train in its current position. My friend gave up (apparently not such a go-getter after all), and the conductor told me to wait there. The authorities were coming. Il faut pas descendre. Do not try to go onto the tracks. And like that, they were gone.

I sent a few text messages to alert some friends about my loss of shoe. One response read: “Guess you didn’t really need that one.” Guess not.

A few trains came and went, with passengers eyeing me, some in disgust, some in pure awe. I considered trying to jump into the tracks, either to retrieve the shoe or to put myself out of this misery; but I decided that the mortification of losing a shoe and electrocuting myself would be simply too much for one day. 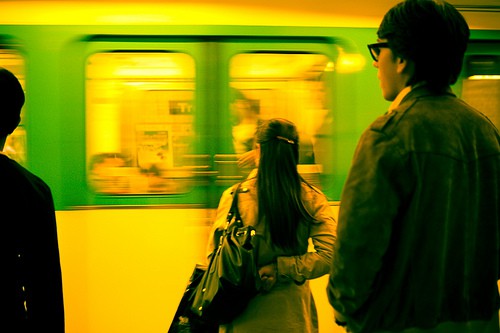 As the next few trains passed, I noticed the conductors watching out for me with that unmistakable look of amused disdain. Finally, one of them got out and yelled, “The girl who lost the shoe?”

Yes, that’s me. How could you tell?

Finally, I spied two RER workers slowly approaching me from the opposite end of the platform. They were in no rush, nor were they amused by the havoc I had caused.
They looked at me.
They looked at my shoe on the tracks.
They left.

A few minutes later, they came back with a broom to fish the shoe out. No luck. One went to get another broom.

His partner stayed, and I decided it was a good time to make awkward conversation.
“Does this happen often?” I asked.
“No.”
Then she told me to go sit down.
I obeyed.

Then she conceded, “Well sometimes people lose phones. But not shoes.”

Finally her counterpart came back and embarked upon an elaborate shoe rescue endeavor. While the woman watched for oncoming trains, he used the two brooms in a “chopstick-like” manner and eventually succeeded in lifting my shoe from the tracks below. It was frightened, but intact.

“Thank you so much. I’m so sorry about this,” I giggled, immediately realizing that I shouldn’t be giggling.
He sort of smiled.
She didn’t.
They left.

I looked around the platform for someone to share in my joy—or at least in the absurdity of my shame—but, strangely, no one wanted to associate with me.

The next train came and I hopped on, both my foot and my ego thoroughly soiled.

As the train pulled away I wondered, “How would a cool French girl have handled that situation?”

It’s pretty clear. A cool French girl would never have been in that situation because (1) she would not be a complete spazz, and (2) she would have been wearing cool French boots, which are what I intend to wear for the remainder of my time in Paris. 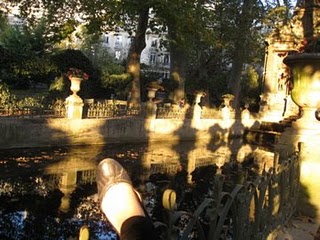 *P.S. Today I took my shoe to my special secret fountain to cheer it up because it was ashamed.

Written by Tory Hoen, edited by Geneviève Sandifer  for the HiP Paris Blog. Looking for a fabulous vacation rental in Paris, Provence, or Tuscany? Check out Haven in Paris.

As I was relaxing before work I read the blog by Tory about losing her shoe and just howled. Thanks

Thanks, Julie and Melissa!

Julie, sounds like quite the adventure. And Melissa, so brave! I probably should have done the same but I was literally envisioning the headlines: “Crazy American girl seeking shoe gets flattened by Metro.” Not pretty.

I chuckled through your whole blog. You aren’t the only one… it happened to me. It was my fuscia Roberto Vascon mules made with ostrich skin, I was literally in love with these shoes. It happened on the métro. The shoe slipped right off my foot as I boarded the métro car, and fell onto the tracks. Obviously I didn’t get on the train, and I hopped around for a minute on one foot. Finally the métro left and I was standing there thinking of all the nastiness from the floor that was going to get on my foot if I placed it on the ground. Ewww. And then I thought, “how am I going to get my shoe?” I had fallen very close to the wall of the platform and even looked withing reach, but only for someone who was willing to lie on that disgusting floor and make a grab for it. I really loved those shoes. Just my luck, I was wearing a white coat that day. I checked the tunnel to see if the next métro was coming. All clear. I took the plunge. When my fingertips brushed the shoe I thanked my lucky stars in the sky, and I walked around with a black smear on the front of my coat the rest of the day, but at least I was walking with both shoes on!

haha, quelle horreur!! I definitely sympathize, I had one of my most embarrassing moments in Paris as well- but it was trying to describe a female problem in a pharmacy, with a french/english dictionary and hand gestures.

That photo of your embarrassed shoe by the fountain is so lovely. And think of it- you will always have this hilarious and charming story to tell at dinner parties!!