Friend or Foe? How to Cope When the French Get Feisty 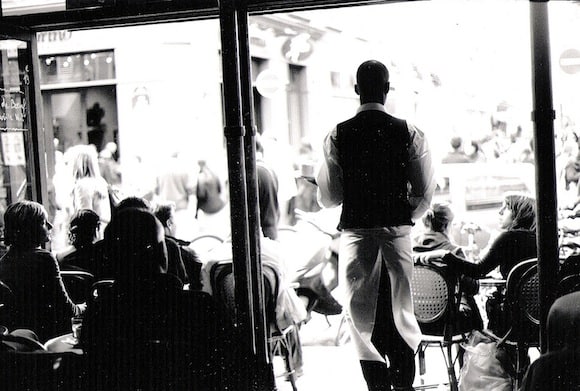 French café and waiter … unfortunately not always famous for their friendliness. Dolarz

We’ve all heard something to the effect of, “Paris would be perfect, if it weren’t for the French.” I usually laugh these comments off as clichés that hark back to an earlier age, when France was more culturally closed than it is now. We all know that today’s French are as affable as kittens… or are they?

During my days in Paris, my opinion of Parisians vacillated constantly. One moment, I was pleasantly surprised by the (maybe too) friendly feedback I would get from taxi drivers, “Your accent is so charming, you should stay in France forever”; and the next, I was smarting from the evil looks cast by super-stylish French salesgirls, whose foreigner radar always seemed to seek me out. 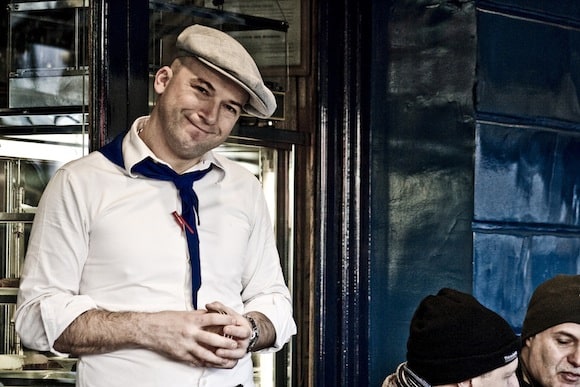 French waiter, smiling and ready for your order! Flequi

There’s really no point in generalizing about whether the French are “nice” or “mean.” It’s like asking whether clowns are funny or terrifying. The answer? Both.

It’s a nuanced world, especially in Paris. During my last visit, I was in a bakery when an obviously non-French girl was attempting to order a flan. The woman behind the counter asked what kind.

“Nature (plain),” said the girl.
“Il n’y a plus. Que d’abricot (There’s no more, only apricot),” said the saleswoman.
“Nature,” repeated the girl, not understanding.
“Abricot,” insisted the saleswoman.
“Nature.”
“Abricot.”
This went on for a full minute, with the French saleswoman refusing to budge, despite knowing that the poor flan-craving girl in front of her had no idea what was going on. Finally, she basically flung an apricot flan at the girl and sent her packing.

Sometimes, the French are just like that; they make things difficult just for the sake of being difficult. (Because when it’s not difficult, it’s boring).

Therefore, your happiness in Paris may come down to your ability to “manage” the French. Here are a few tips to keep in mind when things (or individuals) get prickly: 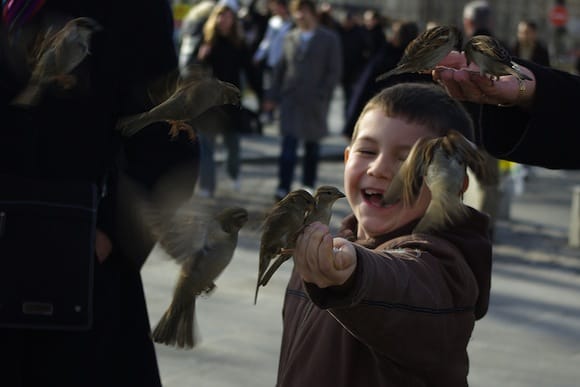 Smiling in Paris – if a child can do it, so can you. Alexandre Duret-Lutz

And remember that, fundamentally, the French kind of like you—even if they act like they hate you. There’s an age-old tradition of loving to hate-to-love-to-hate-to-love-to-hate foreigners, especially Americans. But now that I’m in New York and hearing French on every other street corner, I realize they can’t hate us that much (try as they might to pretend they do).

Written by Tory Hoen for the Hip Paris blog. For our amazing rentals in Paris, Provence & Tuscany check out our website Haven in Paris.

16 comments on “Friend or Foe? How to Cope When the French Get Feisty”

We need some takers on the intive, huh!I meant to comment on this yesterday, but got distracted with Ken’s question up there, and was Googling about trailer parks/mobile home parks in France. With the search terms I used I got over 19 million hits, so yes, there are a lot of parks. But they are just that: vacationing caravan parks, not places where people live long term.I know I have seen TV shows about gypsy camps all around Europe, though. That’s probably as close to trailer park as it gets here, huh.I loved the puns in this one! And now I think I want to risk massive food reactions with a kebab frites. YUM. I’d take that over fancy-schmancy any day!

hi!
for a while ago u asked me about the name of my favourite bar in Montmartre where I use to have the best mojitos, the name is L’escale but unfortunately it got burned down 2 months ago 🙁

Loved this post! May need to re-read it each time I set foot outside to keep me sane.

Thanks, everyone, for your great feedback! The French will never cease to perplex us, but I guess we all agree that half the fun of Paris is trying to navigate its residents. Tory

I have a love/hate relationship with Paris, just as the Parisians have a love/hate relationship with foreigners, but remember one thing, they don’t discriminate, they treat other French people equally bad or good as they would Americans/foreigners. Totally, agree don’t take anything personally!!! And, laugh at the absurdity as it relates to lack of customer service (e.g., returning something at a dept. store)

Yeah you are right about the love/hate for sure Randy! You are right, the lack of customer service is crazy. Sometimes I feel it is getting better but I am not so sure!!

Love this! I have found Parisians to be mostly lovely, with a few exceptions. I also try to respect local customs and, of course, to speak as much French as I can. I’m certainly not fluent, but I do my best and it seems to help. Just think how bent-out-of-shape Americans get when people come here and don’t speak English.

Confidence and smiling helps in Paris but I guess it helps everywhere.

And I like French people, even with all their moods 😉 As you said, at least life is not boring in France!

People often forget that Paris is a world capital, like NYC, not a small city like Amsterdam or San Francisco. A lot of Parisians’ hardness or cynicism comes from that, the stresses and frustrations of living in a big, populous, expensive city, which is always swarming with tourists. I often wonder how they find it in them to be as open, helpful and responsive as they have been to me. My feeling is that many are lonely, isolated and depressed, and what they crave and respond to is being noticed, respected and listened to. So in addition to the advice above, I would add the following: be as polite as you can be, but have your politesse come from a place of sincerity. Be quick to express thanks for any help you get. Life in Paris is hard for a lot of people; the climate, the metro, the crowds, the dirt. When you’re dealing with your fellow residents, ask yourself, Am I making this person’s day a little harder, or a little brighter? Personally, I think people should ditch the scowls; as I’ve said before, unless you’re a supermodel, they spoil your looks, and can make you look arrogant, bitter, difficult, or just a real no-fun zone. Second, hard as it can be at times, keep your cool; don’t show your annoyance or impatience. Third, accept that some things are just not going to work out, and move on to the next encounter, which hopefully will be better.

I can fully subscribe to your observations AND tips to get along with the French (especially the Parisians). We had BOTH experiences of an extremely rude ;( waiter and a wonderfully smiling 🙂 (although just as overstretched and hard working) waitress only a day later. Were with 2 English friends, we spoke French; it wasn’t an issue of not understanding. When, yesterday, we were accommodated and served with utmost courtesy, THEIR faith in France was restored and they insisted in a rather large tip and I was telling the waitress how happy she made our guests (and us)….
Being a friendly, smiley woman, I also learned here that I CAN be quite firm when I feel I’m being taken for a foreign fool and scowling works a treat with the French. They respect you when they realize they can’t ‘mob’ you!
So BRAVO for this great article and WONDERFUL photos!!!

I agree: my opinion vacillates between finding the Parisians wonderful and warm and icy as a ‘burg. But my favorite piece of advice is to try scowling when the smiling doesn’t work!

I am basically a smiley person. I am used to people responding in the same way. But I ran into a few of the tougher nuts to crack in Paris.
So after a while, I learned to Out Haughty them.
It works for me 🙂

Perfect observations! I think I may have witnessed the same abricot-nature debate! Or was it one of the countless other instances where the French created an awkward situation at the expense of a confused expat?