When my friend Jack, co-founder of Trufflepig, and I went out for a night on the town, I should have known absolutely anything could happen! Everything from snooty hipster bartenders, gigantic mushrooms and famous people citings were on the menu. Jack described the night in perfect detail below, and I look forward to our next perfectly Parisian rendezvous. –Erica 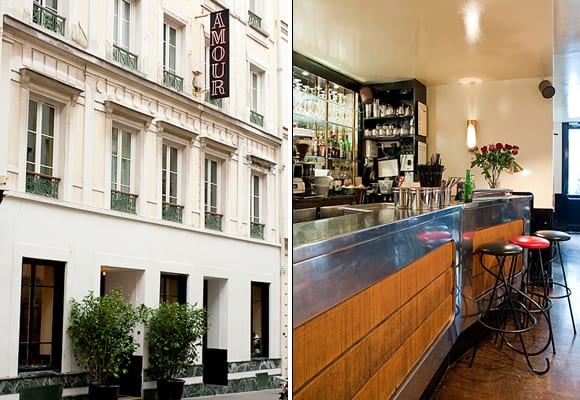 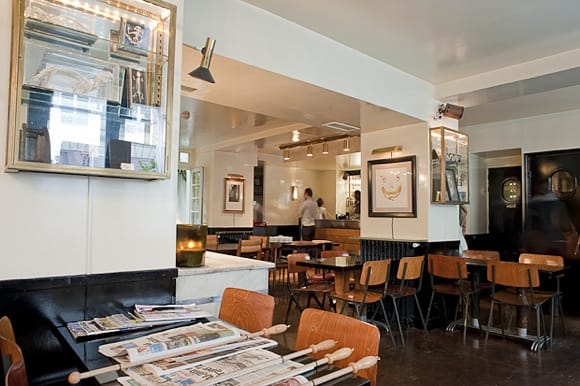 Paris is an ever-changing city of contrasts, and many people who come here on vacation looking for a fixed, romantic idea of Paris based on a book or a film or a dream end up being surprised that it’s a real place, not a movie set. Not all the buildings are beautiful, the sun doesn’t glint permanently off the slate roofs, and not everyone who lives here is a charming Gallic man with a bristling moustache and a well-trained aquiline nose. 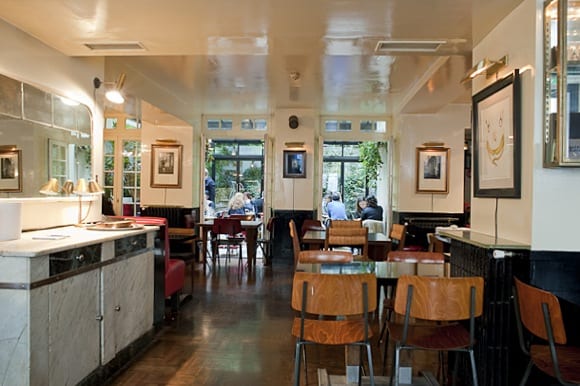 But every now and then an evening unfolds in such a way that comes straight off the Paris song sheet. I had just such an evening on a recent night on the town with Erica Berman of Haven in Paris. If the evening followed a script, it would have been one written by a combination of the tourist board and the comedy council, rather than Disney. For a start, we were up in the 9th arrondissement rather than strolling on the boulevards in the more obvious parts of town, but by the end of the evening we were in stitches at quite how perfectly Paris the night turned out to be.

First up, we met for cocktails in the painfully hip and happening Hotel Amour. I hadn’t been for a couple of years, but it is generally known for delivering on bustling atmosphere, reasonable food, and an eye-watering hipster vibe in the evening. 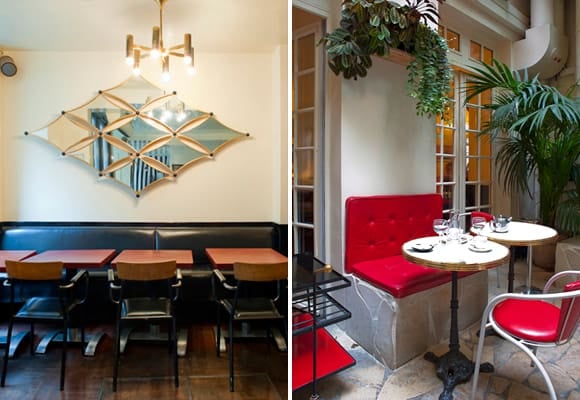 We arrived before 8:00 pm and although the place was all but empty, we were greeted with the Hotel Amour’s special brand of ice-cold amour: all these empty tables you see are reserved by important people who will no doubt arrive any minute now, and your request for a cocktail is not only surprising and absurd but it’s downright rude and unreasonable. What do you think it is, bon dieu? Cocktail hour in a bar?! We were eventually granted permission to perch at a side table in a draft, as long as our drinks were drunk in 20 minutes and we promised to clear off before any real clients arrived. We ordered, chatted enjoyably about the pleasures of doing business in France, sipped our drinks as the room obstinately refused to fill with diners, asked for the bill, tipped lavishly and moved on. I actually do like the Hotel Amour, if only because its name appeals to my British sense of irony. 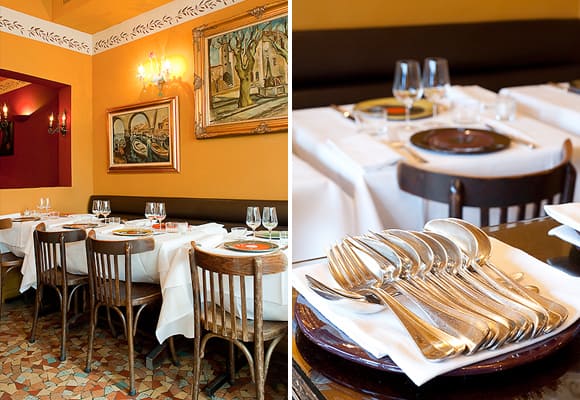 From there, we walked a couple blocks down to Casa Olympe, the sort of restaurant that Paris does so very well: a small unassuming 10 table place that you could walk by without noticing, but with someone in the kitchen who really knows what they’re doing. Just enough attention is paid to the style and décor, but considerably more to the food and the menu. In this case, the person in the kitchen is something of a legend: Olympe Versini, who my Gault Millau guide tells me was a big deal in the Nouvelle Cuisine movement back in the 70s and is clearly still at the top of her game. 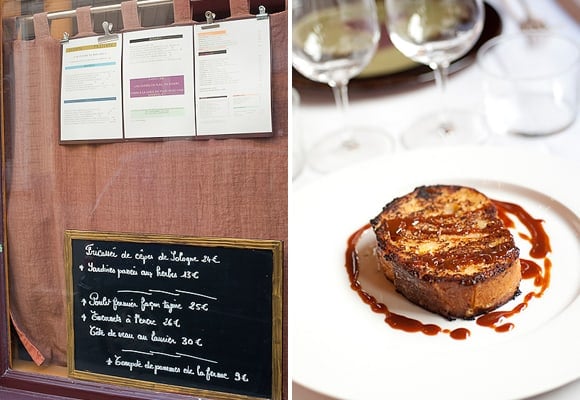 The menu featured some local, seasonal French classics which means to say quite local and very seasonal, and it being hunting season, it bordered on the murderous (if you’re a duck).  I ordered the canard sauvage sauce salmis. I can’t remember what Erica ordered for her main as I had stolen most of her excellent poêlée de cèpes mushroom appetizer and thought it polite to concentrate more on my own food thereafter. I’d spent the past two weekends hunting cèpes in Fontainebleau forest and had certainly not come up with anything as good-looking as the handbag-sized (and priced) specimens Olympe rustled up.

Everything was good. Really good. Rustic cuisine with an underpinning of genuine gastronomic flair, efficient service that bordered on haughty — you’d be forgiven for thinking this is the pure Paris I referred to at the top of the article. To top it off, we were sandwiched between an über-famous fashion designer on one side, and a lone, guide-book toting tourist on the other. The former, clearly a regular, was having a fantastic time talking in hushed tones to a rather beautiful Israeli-looking man and making light work of the menu and wine list.  The lone tourist, however, got more and more riled up as the evening went on, and eventually all but stormed out. He must have been infuriated by our conversation in grating British and American accents, but I have little sympathy since he spent all evening listening in attentively. Was the food too tasty? Was it annoying him that we were not French? Did he think 2-3 hours spent over dinner was a waste of time? Was he disappointed by how feebly his attempts to grow a moustache were paying off? 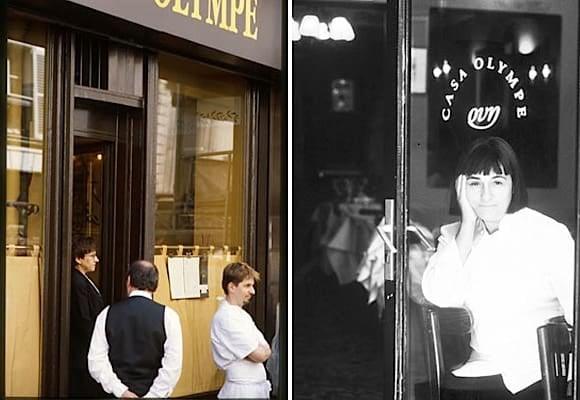 Either way, something wasn’t sitting right for him, and it led me to think this: Paris is a city above all in which it pays no dividends to swim upstream. Sometimes the service is haughty (sometimes it’s worse than that); sometimes it seems odd the way things are done; oftentimes meals and moments are divine and amazing. In all cases, as the Brits used to say in the war, Keep Calm and Carry On. Erica and I had an evening of the best and worst of Paris, of exactly what people who live here end up loving and hating the most. For me, the balance continues to swing ever more towards loving, and the dislikeable becomes ever more the laughable.

Written by Jack Dancy for the HiP Paris Blog. Julien Hausherr is a photographer based in Paris, specializing in architecture, still-life and reporting. Contact: [email protected] Looking for a fabulous vacation rental in Paris, Provence, or Tuscany? Check out Haven in Paris.

Lovely photos of the Hotel Amour. Whilst I had a very similar experience there once (no dinner reservation means 2nd rate service), it’s still one of my favourite places in Paris for its vibe and beautiful terrace!

Et oui, Paris will always be Paris! We will miss you Amy. xo Erica

I once called hotel Amour – which does look nice and is in my ‘hood – for a reservation and was told to speak louder (and louder and louder) because the person answering the phone could not or would not turn down the loud music. I thought: this is what is called a non-starter, and hung up as she kept screaming for me to scream along.

Now we need to do it again! I highly recommend Casa Olympe for low key ambiance and amazing food. The service is not always the friendliest, but the quality of the meal is always right on. Bon appetit! Hotel Amour is quite the scene. If you go, let us know your thoughts. -Erica

You have such a fun blog! I love reading everyday and seeing what cool eye candy you will have,

What a hysterical and lovely post. And what gorgeous spaces (though, perhaps not so much if you are a duck!).

Great post! Good for you for not letting them get to you and spoiling your good time. I still have some work to do in that department. I’m usually able to calm down once a drink is in my hand – and good food helps too, of course!