Midnight in Paris: Indulging the Ex-Pat Fantasy with Woody Allen

Woody Allen’s latest film, Midnight in Paris, is about – what else? Midnight in Paris! Inspired by her recent run-in with the director himself, Tory reminisces about how living the romantic, literary dream also means taking stock of the realities of life in the city of lights… -Geneviève 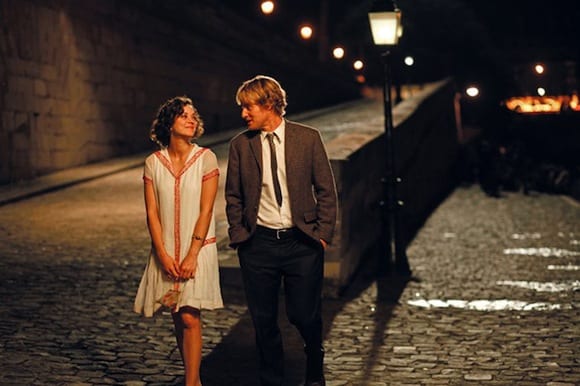 Film still from Midnight in Paris

“I don’t deliberately make a film a year, but that seems to be what happens,” Woody Allen told me when I caught up with him at an event last December in New York. “Eventually I will stop working or keel over, but so far everything’s been going along fine.”

At the time, he had just wrapped Midnight in Paris, which headlined this year’s Cannes Film Festival in May (and is now in theaters in France and the United States). I had been anticipating this film ever since my friend caught a glimpse of the crew shooting on one of the quais last fall, and I was curious to see how Allen would interpret (or misinterpret) Paris. 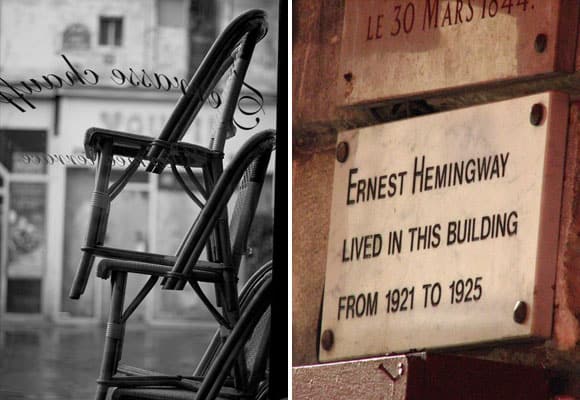 In short, Midnight in Paris follows Owen Wilson’s character, an earnest American novelist, as he is unexpectedly lured into a magical world, populated by the likes of Hemingway, Fitzgerald, Picasso, Gertrude Stein, Dalí, Luis Buñuel, Man Ray, T. S. Eliot, and the list goes on. Late in the film, a spin through the Belle Epoque has Wilson rubbing shoulders with Gauguin, Degas and Toulouse-Lautrec.

Like many of Allen’s films, the whole thing was pretty far-fetched, but I must admit, it totally captivated me in the watching. More importantly, it made me laugh at myself—if only because it played with so many of the stereotypes that lure starry-eyed Americans (myself included) to Paris. Owen Wilson’s literary-inspired naïveté struck a serious chord with me. It’s no coincidence that when I first arrived, I named my blog A Moveable Beast in honor of the bohemian, writer-ly existence I planned to cultivate. 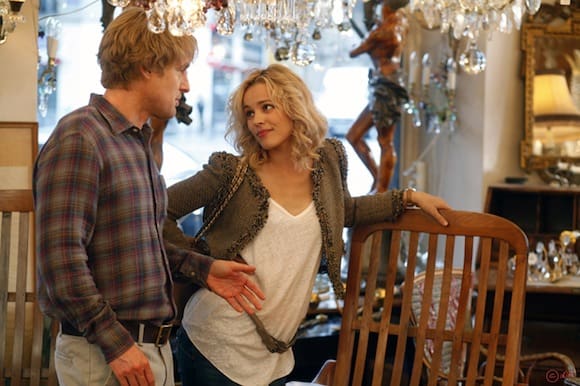 Film still from Midnight in Paris

But for all ex-pats who choose to live in Paris for romantic reasons, there eventually comes a reckoning. Amidst the magic, there are contemporary realities that ultimately chip away at one’s starry-eyed view of the city. As the film ended, I found myself craving a sequel where Owen Wilson stops cavorting with Gertrude Stein and actually tries to set up an SFR account, square away his carte de séjour, and find a taxi at 3am on a Saturday in the Marais. Alas, such activities don’t make for a very compelling film. 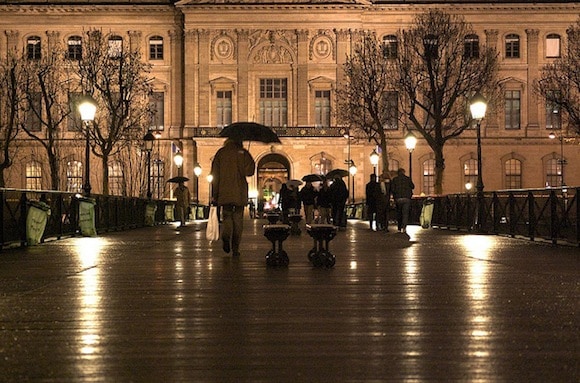 For most ex-pats (Owen Wilson and myself included) the challenge of life in Paris is to balance the romance with the reality, to let yourself get carried away on occasion, but also stay grounded in the here and now. It’s quite possible to strike a satisfying equilibrium: you can pour over A Moveable Feast and get your apartment wired with Wifi, get lost in the photos of Robert Doisneau and lug lampshades home from BHV. Such activities are not mutually exclusive.

As Allen demonstrates in his film, there is the Paris we dream of, the Paris that exists, and the all-important intersection of the two. I consider myself to have one foot in reality and one foot in a completely absurd fantasy world—and that’s just how I like it. 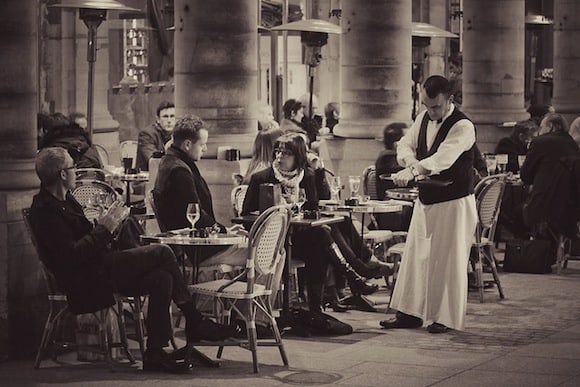 17 comments on “Midnight in Paris: Indulging the Ex-Pat Fantasy with Woody Allen”

I just got home at around Midnight in Healdsburg – Wine Country, Northern California – after watching the film. I fired up my vintage Chevrolet pick-up hot rod (another manifestation of nostalgia that eclipses and perhaps anesthetizes/insulates me from the ugliness of the era in which I feel somehow cheated to inhabit. I enjoyed the film, felt a sense of (in retrospect) more than slight cheeziness (Kraft American vs. a good gruyère) at having taken a narcissistic pride in not only understanding but anticipating the lion’s share of the references. Having lived two years in France (Bretagne and Provence, not Paris) I was fully aware of the disparity between illusion and reality and what one could perhaps describe as the “myth” of Paris. Tears came to my eyes and I understood that the incredible privilege of being able to explore one’s fantasies – geographical or otherwise – somehow denies you of the innocence of illusion. It is all a part of the creeping rot (as opposed to noble rot, per French theme) of mortality. Surely it is better to imagine a Paris that never existed except in our collective consciousness? Or does living the reality make us more whole? It certainly isolates us from one another in terms of our perception of reality. I am grateful for the opportunities I have had to explore the world. The gratitude is not entirely free of a profound sense of guilt. The tears came, perhaps, from understanding that I would always have nostalgia for a place that doesn’t exist: nostalgia for the ephemeral ideal of fulfillment.

Throughout the movie, in the scenes at night it what is old Paris, there is always water flowing down the gutters on the sides of the cobbled streets. Does anyone have an idea of the significance of that in this movie. They clearly had to plan it.

Umm in Paris they run water to clean the streets. It is quite common unfortunately (huge waste of water in my opinion) – Erica

Optimism plus hopefulness through a key person is a nice antidote to reality challenges. “Midnight in Paris” captures this theme and was uplifting to watch. Owen had one foot in fantasy and the other in reality. He chose reality, when he found the right person with common values.
From the other side of the world.
Anderson

I´m listening to Amelie Poulain´s soundtrack while reading this post. It´s amazing how Paris is with me all the time. I was there one year ago and I still dream about going back as soon as possible.

I also can’t wait to see the movie. Part of the magic of Paris, I think, is sitting at a cafe or bistro and imagining all of the great artists, philosophers and writers that frequented these places before you.

Great article, I always have one foot in reality and the other in fantasy.

great article! I adored the movie…and completely relate to this real life / fantasy life balance you have to find in Paris between running a business and just getting by but never getting too disillusioned that we forget how lucky we are to be here and how magical paris really is 🙂

I love this…and I was always worried that if I moved there it would lose some of it’s magic. However…Lindsey is so right…even the practical stuff is more exciting and glamorous in PARIS! I can’t wait to see the film.

Brilliant description of the intersection between Parisian newbie fantasy and expert Parisian complacency. Love the bit about setting up an SFR account 🙂 Though we must admit, even lugging lampshades and trying to secure a cab at 3am are far more glamorous in Paris than anywhere else in the world.

I want to see the movie as I have heard such mixed things and need to form my own opinion. As to living in France… always a challenge to be found, usually involving Internet and Cable TV. The BHV does play a huge role in Paris life… oddly!

Can’t wait to see the movie. I often go to Paris and never takes its beauty for granted. I can walk for hours, always discovering a new street, bookstore, never tires of the specific paris scents, the Seine and its bridges, saint Germain. I always feel as a tourist even though I am french (living in New York). i just finished a wonderful book on the life of Hemingway and his first wife in Paris, the Paris wife..