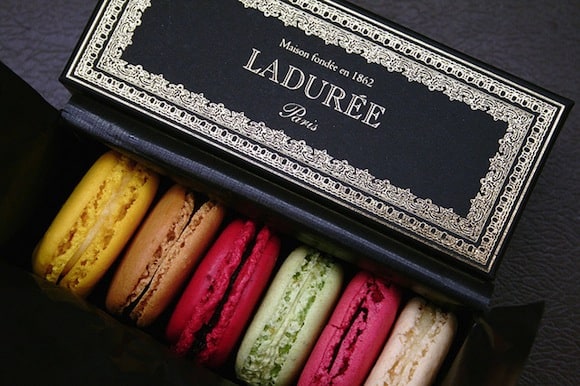 For years, everyone—especially New Yorkers—has been clamoring for the death of the cupcakes. Let those pastel-colored, frosting-slathered, sprinkled-adorned, oh-so-cute sugar bombs be over! Can we puh-leeze move on?? And it would appear, with Ladurée’s arrival on Madison Avenue, New Yorkers may finally get their wish: the macaron could soon trump the cupcake as the sweet du jour. 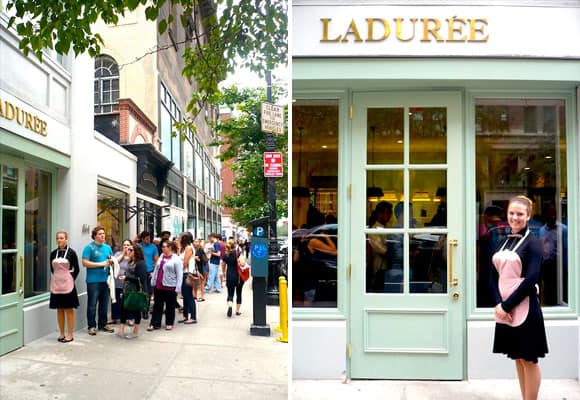 Of course Parisians are well acquainted with Ladurée, the 149-year-old salon de thé that purportedly invented the macaron. But with the exception of savvy New Yorkers who used to raid the Champs-Elysées store for a box of Technicolor two-bite treats, and then proudly parade their pale green shopping bags around the Upper East Side, the French brand has remained an exotic import to New Yorkers. Which explains the two-hour queues. 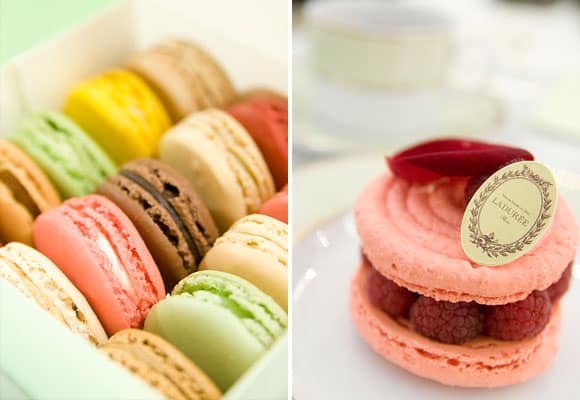 To be fair, by the time I made it to Ladurée, three weeks after it opened, the line was down to a 15-minute wait. As if I were a macaron virgin, the dauntless teenager in front of me who had previously waited hours for a Ladurée hit, told me the sweets “were totally worth the wait.” Meanwhile, a well-coiffed, apron-outfitted mademoiselle regulated the door, not only to control the floods of groupies, but also to keep the inside of the boutique cool for the delicate douceurs. 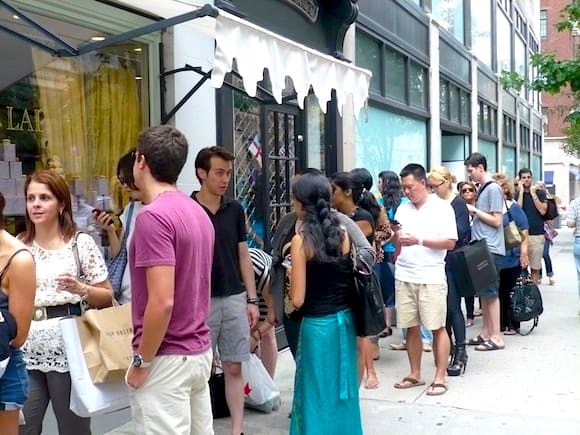 The maiden New York outpost is a more modest affair than the ones in Paris. There are 15 macaron flavors—including the only-in-America cinnamon raisin, seasonal options (strawberry-mint, green apple) and perennial favorites (lemon, cassis)—along with a small selection of chocolates; financiers and madeleines; plus packaged jams and teas. And although they don’t sell viennoiseries or gateaux individuels, you can bring home a candle, journal, tote bag or other branded accessory to prove you’ve broached the famed patisserie’s doors. 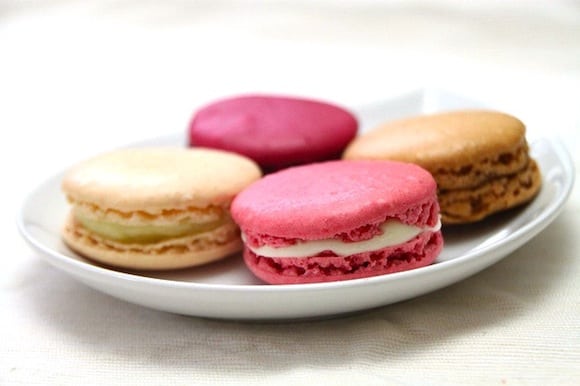 Within another week or two, Ladurée’s lines shouldn’t be any longer than the ones in Paris. But when the full-blown salon de thé opens in Soho next spring (yes, really!), the macaron madness should be just as over-the-top as the cupcake craze has been.

Put on in DC or georgetown!!

I was so excited to try these. But I have a hard time believing that the macaroons are flown in from Paris and if they are, then France is purposely sabotaging this NYC outlet. The ones in NYC taste NOTHING like the ones in Paris. My french pastry-chef boyfriend was horrified at these macaroons, so much so that I had to hear about it for half an hour – “Putain, mais c’est quoi cette merde ?!” They are overpriced, too much almond paste and artificial tasting ganache. I’ve been to all the Ladurées in Paris a dozen times each and they all taste the same, yet the ones in NYC taste artificial. Very disappointed.

Love macarons! Looking forward to having some later this year when the hubby and I make our way out there. Crossing my fingers that they’ll open a store front here in the Bay Area.

J’adore Ladurée! I’m so excited about visiting this store next time I’m in NYC…Their macarons are so good and now they’re launching a makeup line…DELICIOUS!

I left New York damn it. Now Paris is closer. I cant imagine waiting for La duree to come to Greece. 😛

It was only a matter of time of course!! I used to travel abroad always, so it is terrific for those who stay in the states! They are truly iconic.

Quite personally, I prefer Gerard Mulot. They taste naturally sweet, not artificial.

I think this is just the beginning… Ladurée is going to take over the world!

Lucky you in New York. Ill have to wait till I go to Paris again as I cant see them coming to Perth In WA. Id love to try some of their other treats too. Have you seen their new book out? It is so pretty. Fiona

I wrote a post about this, as I am somewhat torn on the matter. I am *obsessed* with Ladurée specifically, and it is the first place I go when in Paris. Having it here in the states is good and bad. I still have not been–I will most likely get to Paris sooner than NYC…strange but true.

Hi Susan! Can you send us the link to your post? We would love to see it!

Of course it’s worth the wait and if you’ve never been inside Ladurée in Paris, you must queue up!

Thanks so much for the mention! The day I visited I waltzed right in with no line. It was a weekday morning…I guess I chose wisely 😉 Nice job on the mouthwatering photos in this post.

yum, yum! those lucky new yorkers! wish they’d make it all the way to california! but will all americans have a refined enough sense of taste to appreciate them more than donuts and cupcakes?

I honestly can’t believe it has taken them this long to open a Ladurée in NY! Honestly, it was only a matter of time before globalization reared its powerful head I just think it’s kind of unfortunate that soon, there will be little novelty in traveling to far away lands for a local specialty or shop because, well, it exists on our own turf. Let’s hope Pierre Hermé doesn’t get any big ideas!

For now, I wish the New Yorkers the best of luck in controlling their waist lines now that macarons are only a wait-away!