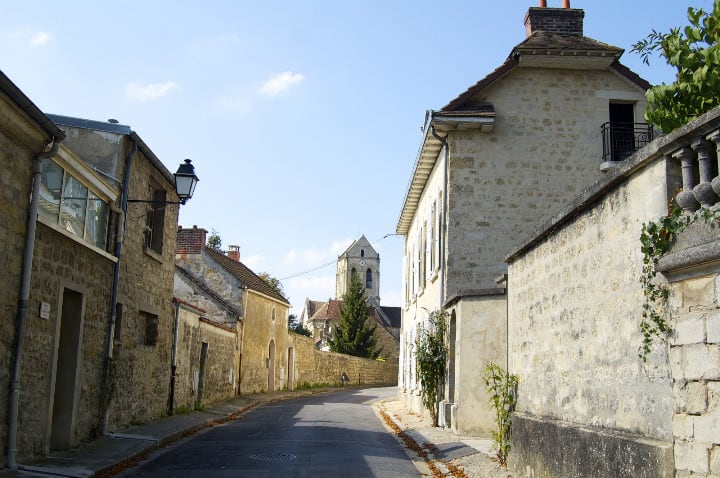 Although the bright colors of Provence normally come to mind when thinking of the paintings of Vincent van Gogh, it was actually in Paris and nearby Auvers-sur-Oise that the passionate artist produced most of his work. As this year commemorates the 125th anniversary of his death, I’ve put together a stroll through the village using his own correspondence as a guide in his work, to pay homage to the artist and highlight the places that so fervently inspired him. 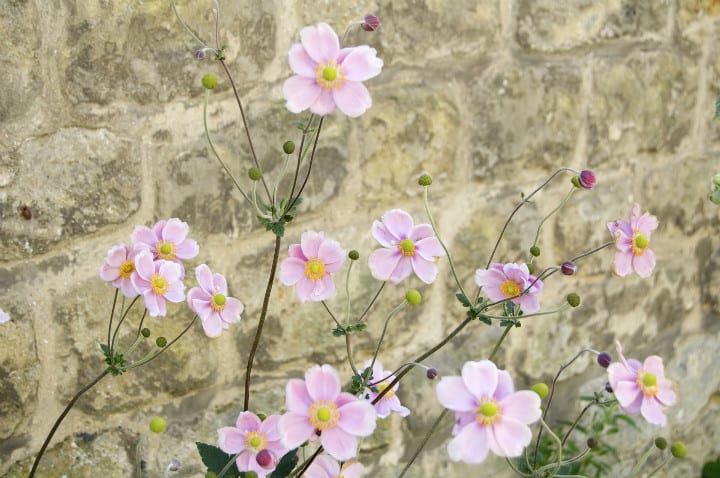 “Auvers is decidedly very beautiful. So much so that I think it’ll be more advantageous to work than not to work, despite all the bad luck that’s to be foreseen with paintings.” A poetic foreshadowing by Vincent near the beginning of his stay in Auvers; in the 70 days he spent in the hamlet, he produced over 70 paintings. It was his fellow artist and dear friend Cezanne who encouraged the Dutchman to spend some time in Auvers under the care of Doctor Paul Gachet. The doctor himself dabbled in art and, over the years, had become a patron and friend to many other Impressionists including Monet, Pissarro, Renoir, and Sisley. For him, art was therapy. 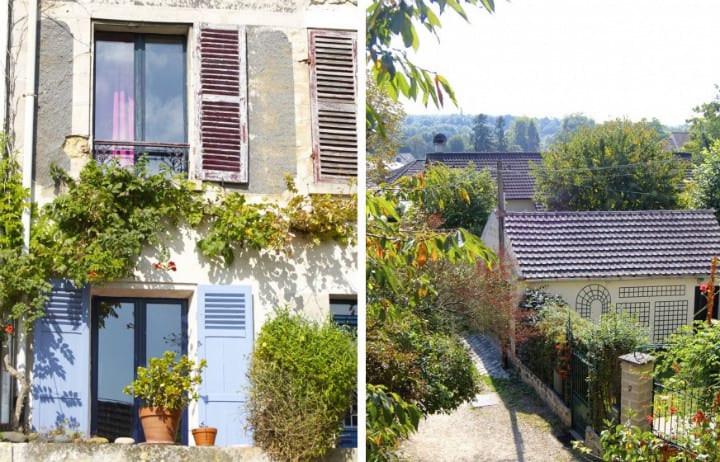 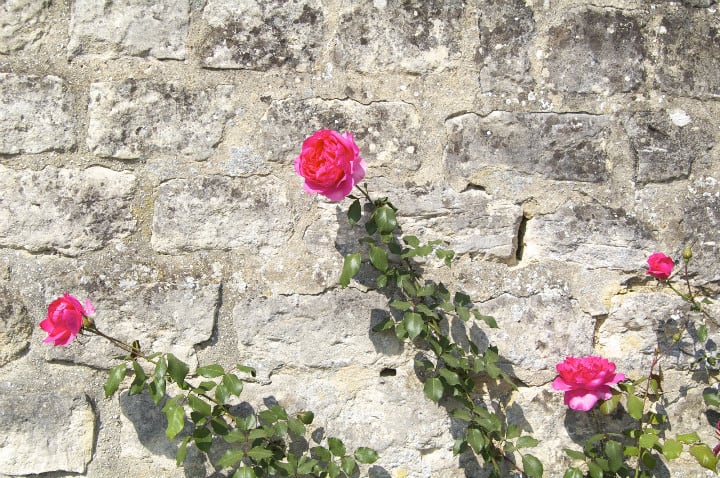 From Paris, a 30-minute train ride will take you to where van Gogh himself arrived on May 20, 1890. Gachet had recommended an inn for his stay, but the artist eventually settled on the Auberge Ravoux due to its cheaper rates, just 4 francs per day. Today you’ll pay more than this to visit the small room he rented, but it’s worth every centime. 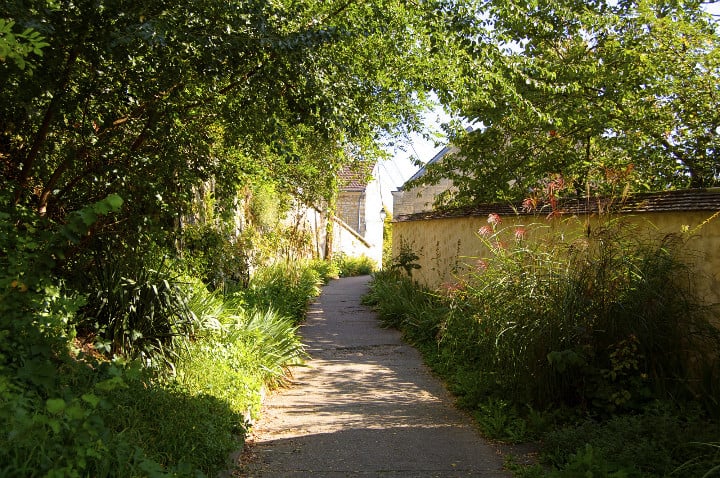 The barren room with just a few small artifacts of the artist’s era can help take you back to when the artist boarded here. More focused on painting than on his room and board, Vincent grumbled to his brother that the innkeepers served up a tedious four-course meal, instead of the “modern” two-course one. And today some of these traditional dishes are still prepared with the same care in the Auberge’s restaurant. 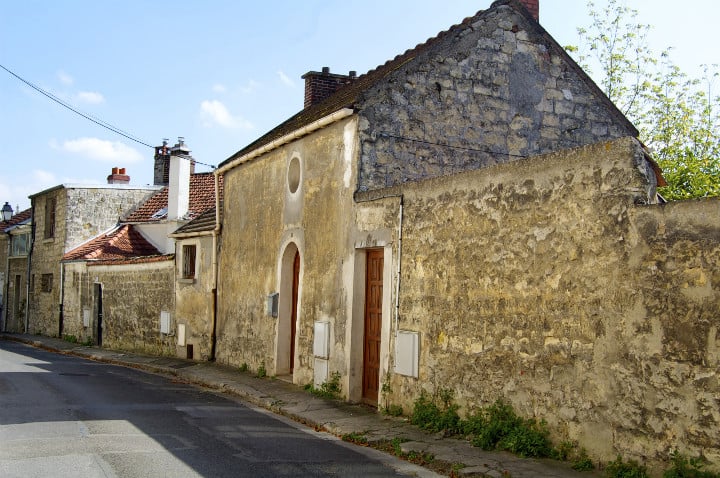 One of the first things van Gogh noticed about the town were the “many old thatched roofs,” which quickly found their way onto his initial Auvers canvases. You can admire some of these old-style houses along rue Carnot as you get acquainted with the town, before slipping up to rue Docteur Gachet, a street which, not surprisingly, takes you to the art patron’s home. 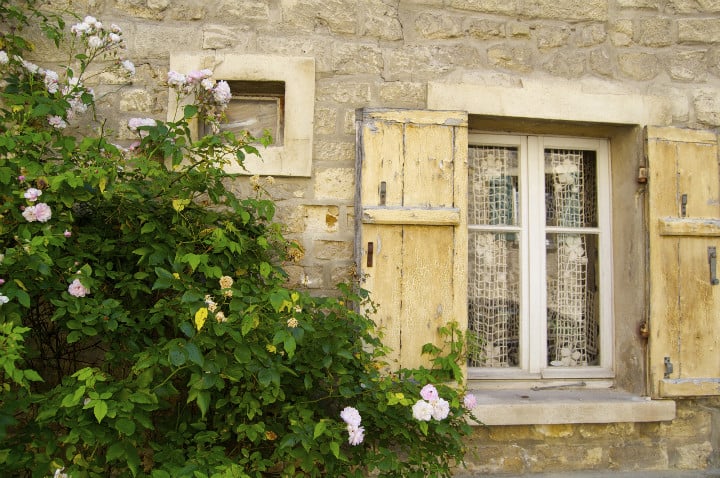 The house became an important venue for van Gogh as he began to trade his artistic services for those of the doctor’s. According to van Gogh, “Mr. Gachet is absolutely fanatical about this portrait,” and little would either have guessed that this very portrait would become van Gogh’s most valued piece, bought in 1990 for $82.5 million (the second version is at the Musée d’Orsay). Vincent was rather taken aback by the clutter of antiques that overpopulated the house, now a museum, but found solace in its peaceful garden, another popular subject matter for his Auvers paintings. 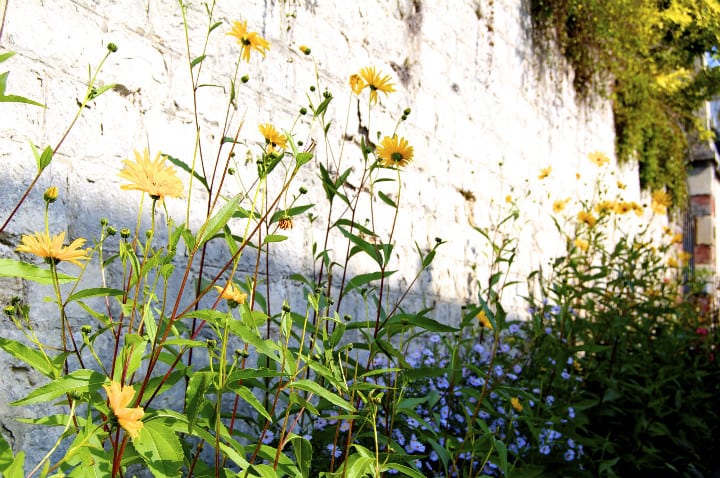 Walking back down rue Docteur Gachet and past the town’s Château (which features multimedia displays on the Impressionists), you’ll reach the Atelier Maison Daubigny; Van Gogh wasn’t the first artist to set up his easel in Auvers. Artist Charles Daubigny was part of the Barbizon school, some of the original artists who began painting en plein air and precursors to the Impressionists. Vincent painted his lovely garden at least three times during his sojourn, in his own right, paying homage to this innovator of his time. 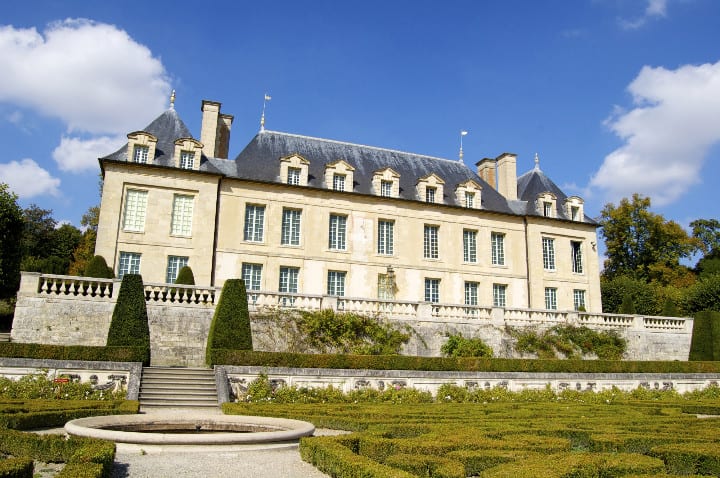 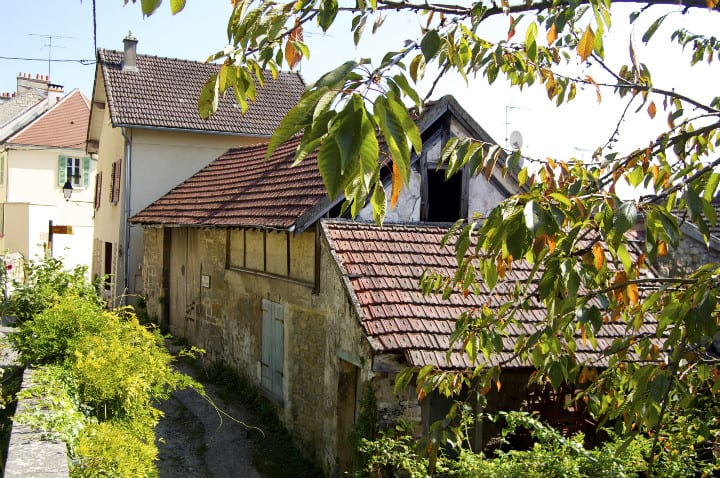 Follow rue Daubigny and you’ll come to one of the village’s most famous landmarks, the parish church. A quaint Romanesque église described by the artist as having “an effect in which the building appears purplish against a sky of a deep and simple blue of pure cobalt, the stained-glass windows look like ultramarine blue patches, the roof is violet and in part orange,” and was put on the map thanks to van Gogh’s painting of it. The moody colors were reflective of the somber cloud creeping over van Gogh’s time in Auvers, overtaking the the initial positive effects of Dr. Gachet and the village. 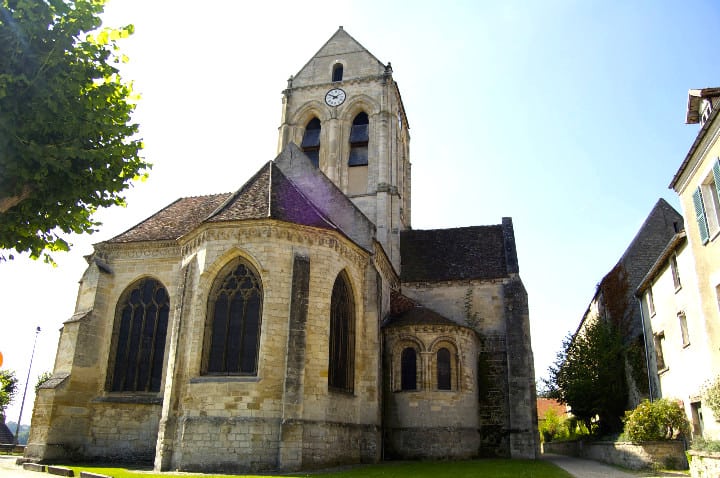 Climbing the hill you will soon be immersed in the wheat fields that sway in a great number of the artist’s Auvers tableaux. At first he was “wholly absorbed in the vast expanse of wheat fields against the hills, large as a sea, delicate yellow, delicate pale green, delicate purple …. all under a sky with delicate blue, white, pink, violet tones.” 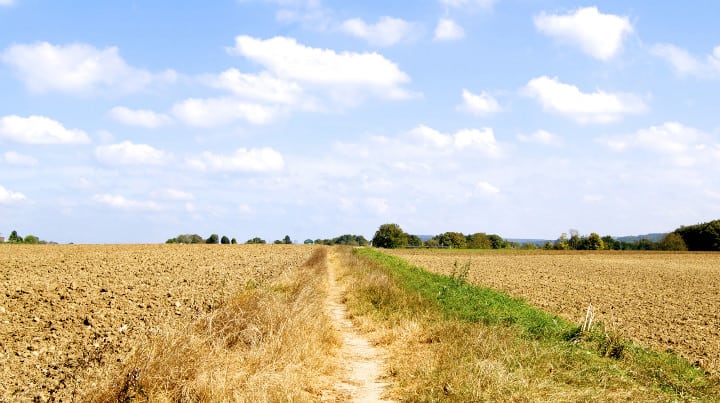 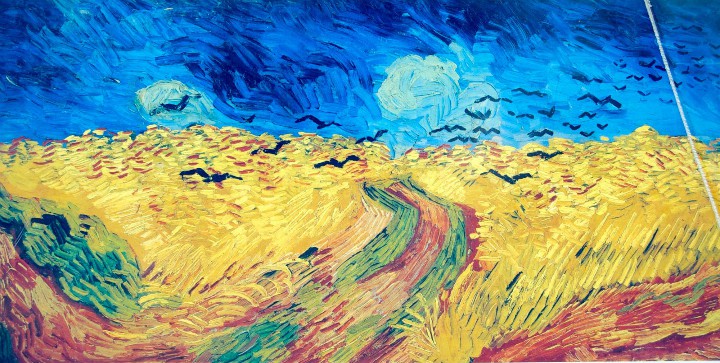 Nonetheless, in July these pastels darkened with the artist’s spirit, declaring to his brother “[I] too still felt very saddened, and had continued to feel the storm that threatens you also weighing upon me;” this anguish expressed in his Wheatfield under Troubled Skies and Wheatfield with Crows, the very fields where the artist attempted to take his life on July 27th, only to pass away in the arms of his beloved brother two days later. It’s fitting that the two close siblings lay in eternal peace side by side in the village cemetery at the edge of the fields, as Vincent would have wanted. 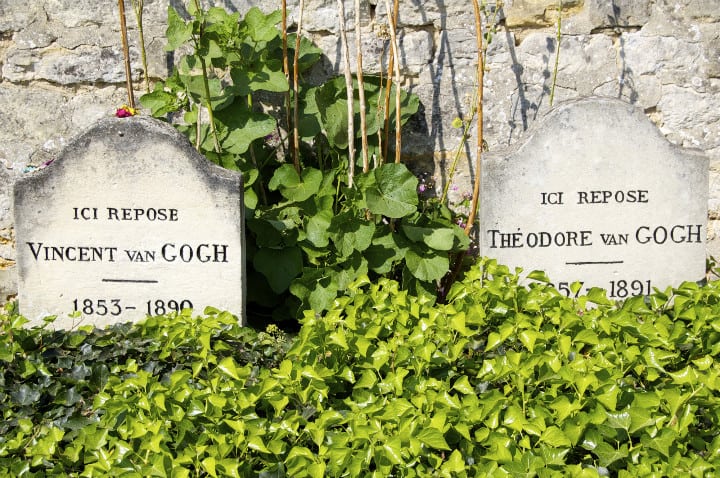 However, don’t leave the town on a melancholic note; your own spirits can be lifted at the Absinthe Museum, where you can sample some of the green spirit that certainly inspired van Gogh and his contemporaries, or stop in at the Auberge Ravoux to savor a “modern two-course” meal, either option Vincent would surely have approved of.

Note: many sites in Auvers are closed Nov-Feb so it’s best to plan your visit from spring through mid-autumn. 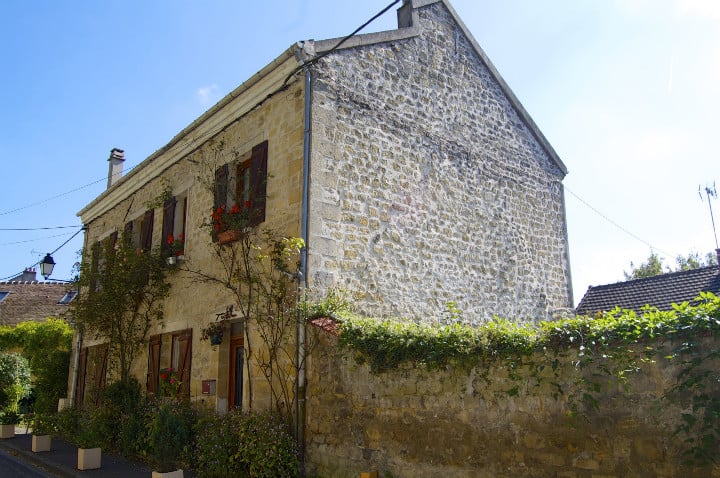 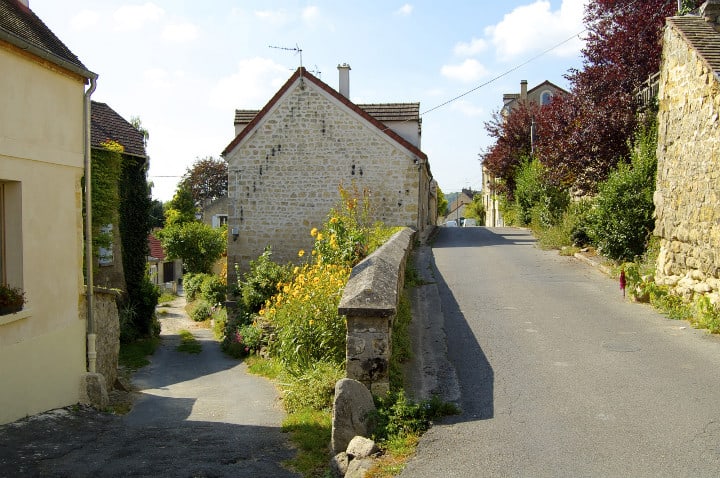 Written by Lily Heise for the HiP Paris Blog. All photos by Isabel Miller-Bottome. Looking for a fabulous vacation rental in Paris, London, Provence, or Tuscany? Check out Haven in Paris.

6 comments on “Following Vincent Van Gogh: The Artist in Auvers-sur-Oise”

Thanks for the memories of Auvers-sur-Oise! We’ve enjoyed a day there recently. Also San Remy and Arles. I’m finding it difficult to comprehend how Vincent could have produced more artwork in Paris and Auvers than in the south. As I recall, he was only in Auvers for a short time before he was shot. How did you calculate he produced more in the north than in the south? Cheers, Kirk

Thanks Kiki! Glad you enjoyed the post! Auvers is definitely a good pair with Giverny, to compare two important artistic towns very close to Paris!

what a lovely, lovely post! makes me think a bit of Giverny and Monet (less troubled though!) Thank you so much for this precious upload!

Thanks Richard! That’s very good advice to add. The town is very easy to navigate with the signposts. A well-deserved lunch at the Auberge! Have you tried any of the recipes?

I made my personal tribute visit to Van Gogh one July day and was overwhelmed by the same intensity of color of the wheat fields’ gold against the deep blue sky.
You might be interested to point out that the town has reproductions of his paintings on signposts where he painted dotted around the area. I had lunch in the Auberge after touring his room and purchased a nice cookbook with recipes of his time.