A Weekend in Normandy: Rouen Roaming 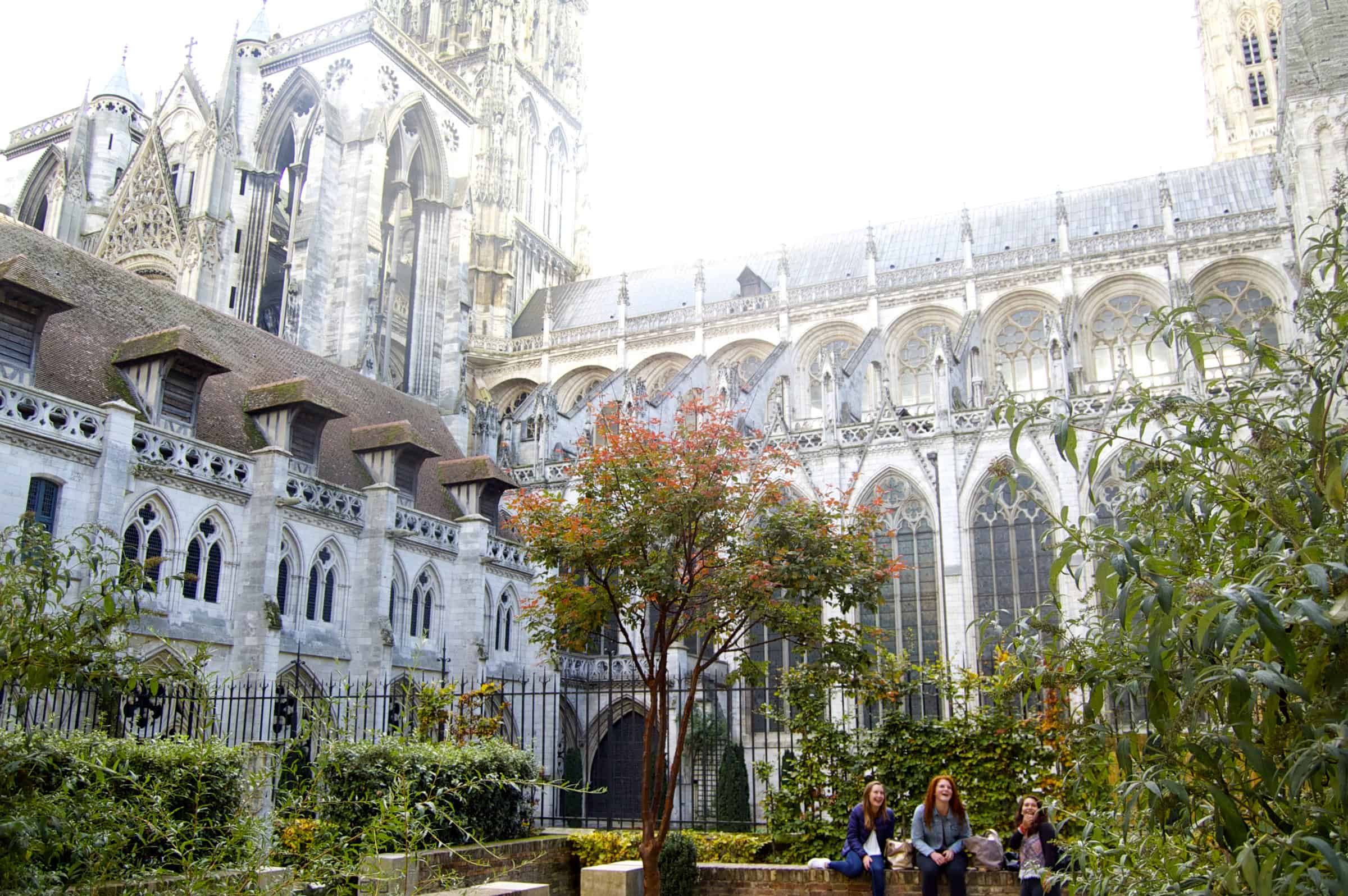 I took the early morning bus to Rouen on a bright, clear day in October. But chillier temperatures wouldn’t diminish a visit to the Haute-Normandie capital, where you can spend the day exploring several of the most impressive gothic churches in France, antique and artisan shops, a 14th century astronomical clock tower, and restaurants serving buttery Norman indulgences and Calvados to warm up with. 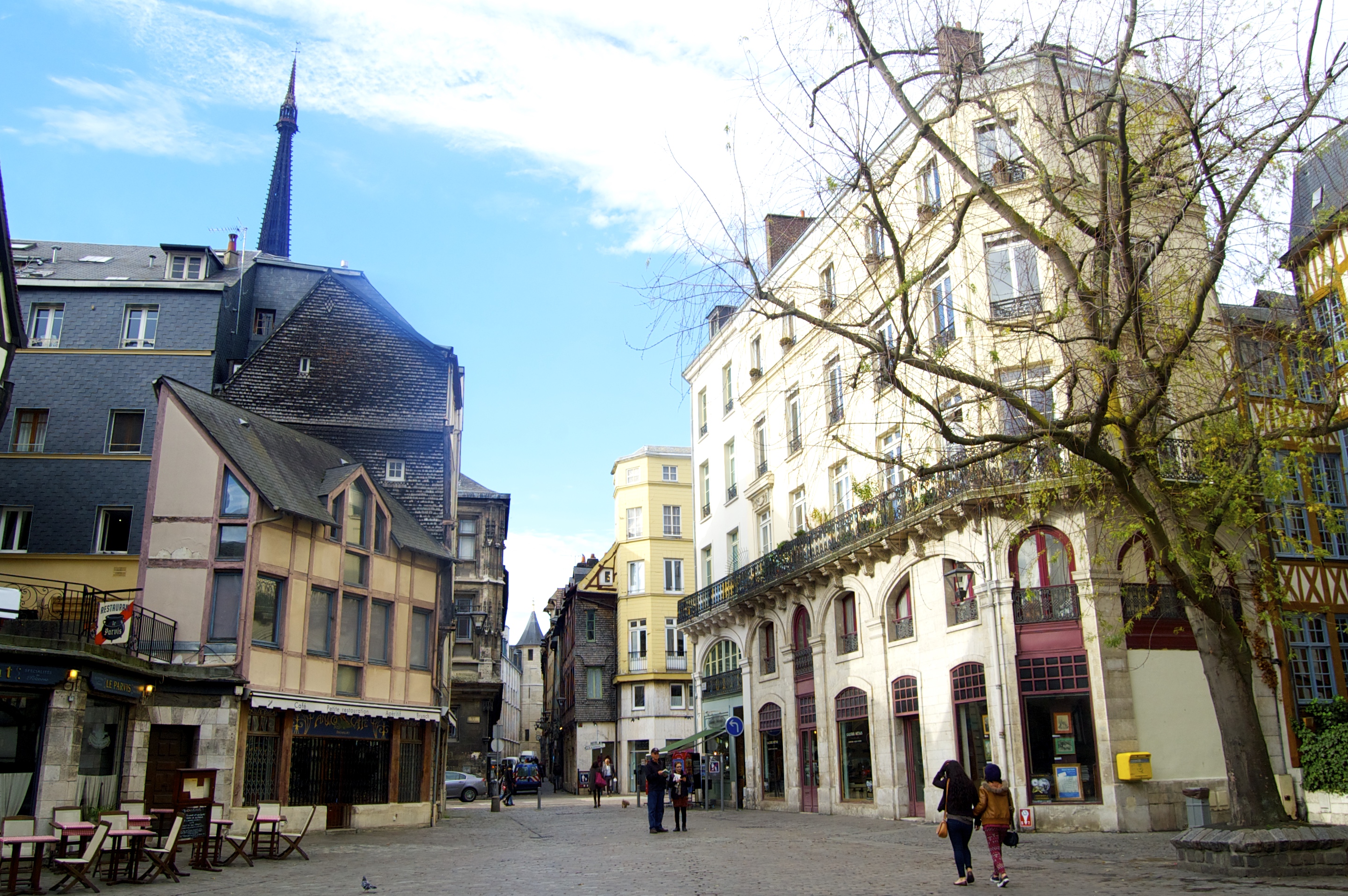 Just a two-hour train ride from Gare St. Lazare and a one-and-a-half-hour bus ride from Bercy (for as little as 5€ each way), it’s easy to explore the cobblestone streets flanked by low, half-timbered buildings in one day. 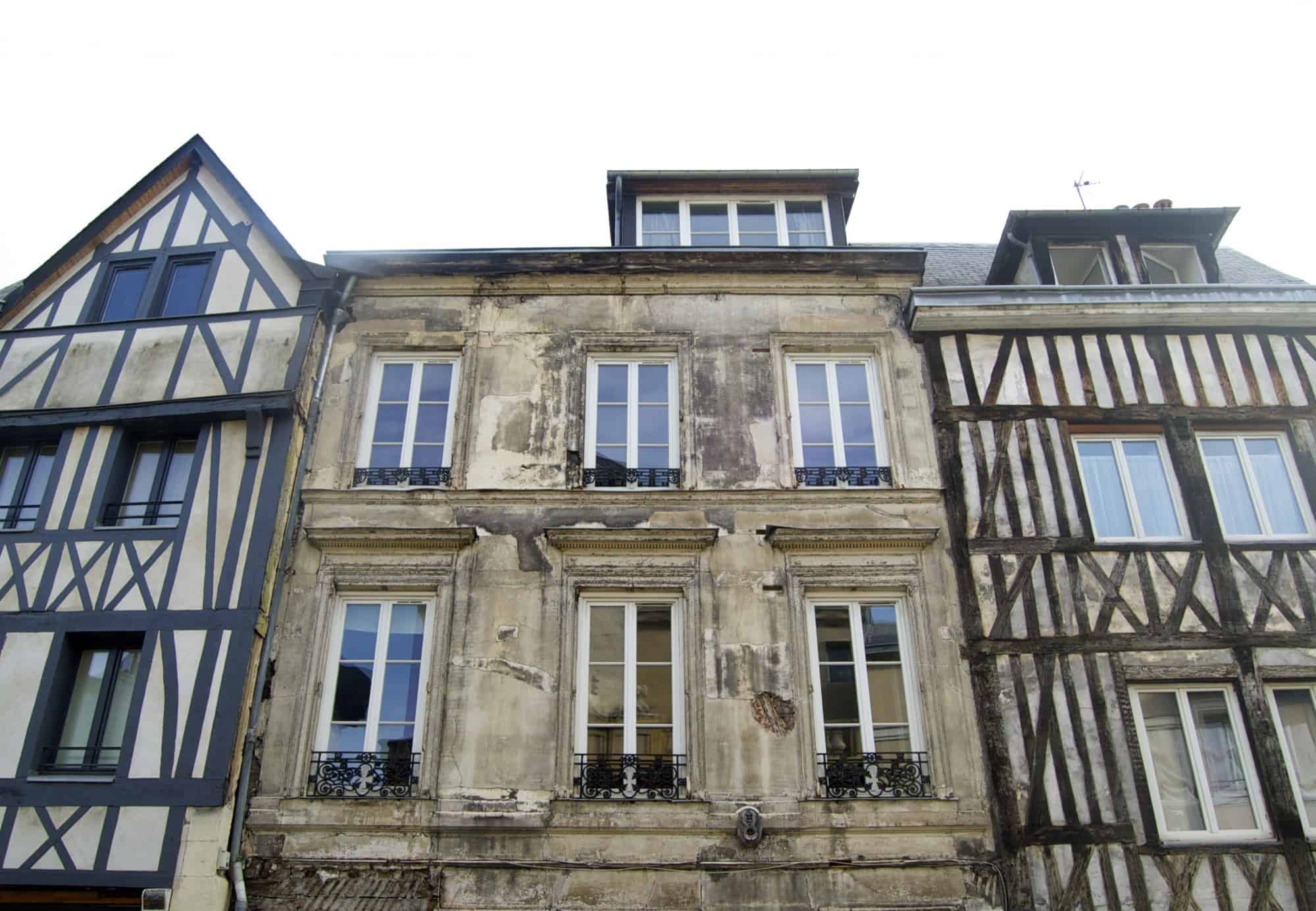 If you take the train, set out walking from the station toward the Seine on rue Jeanne d’Arc. You’ll soon pass a medieval donjon on your left, the last vestige of the castle Philip Augustus built when the French laid siege to Rouen against the English in 1204, and where Joan of Arc was held prisoner and tortured from 1430-31. To render full homage to the national heroine, visit the Historial de Jeanne d’Arc museum in the center of town, newly opened in 2015. 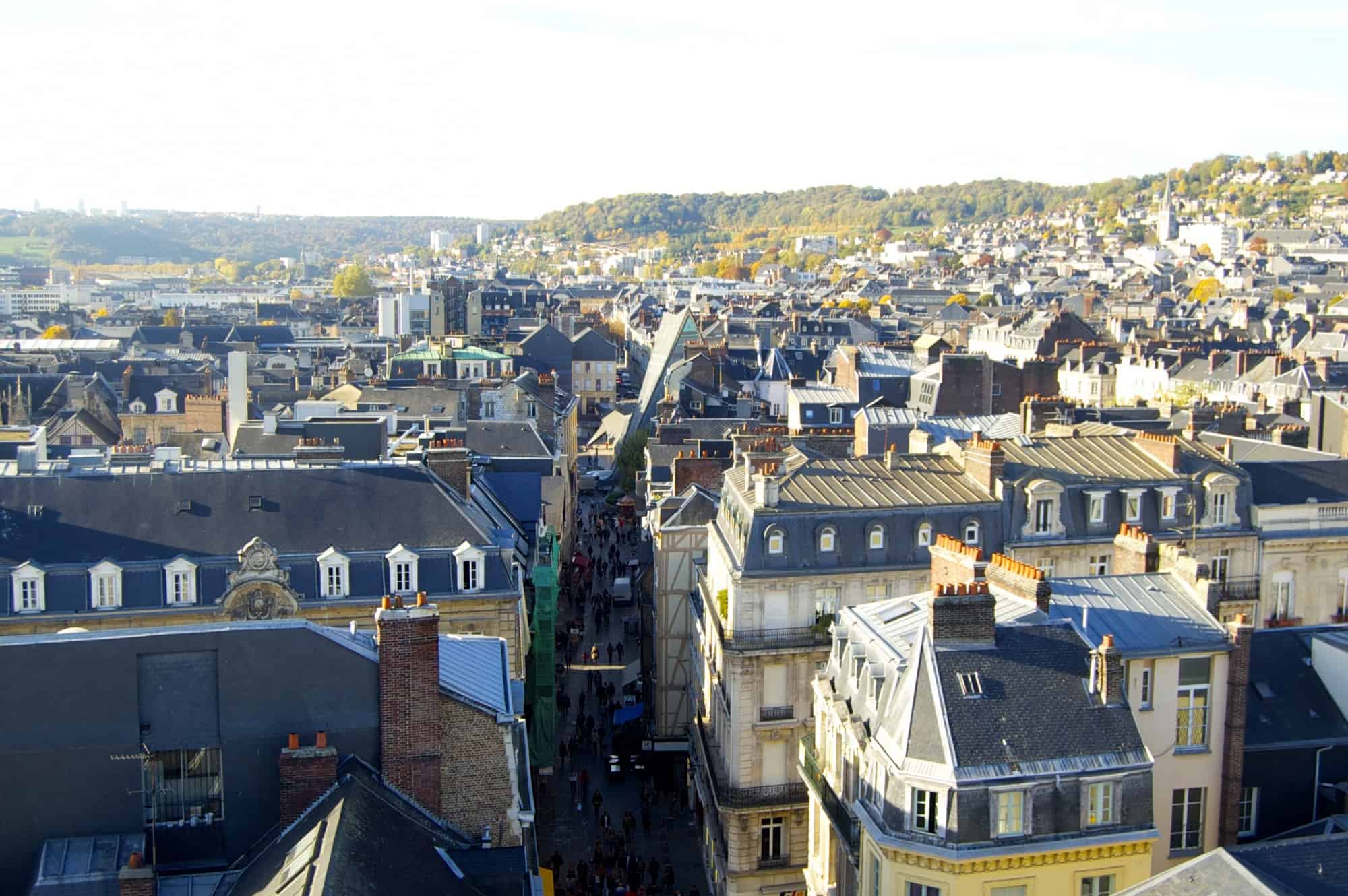 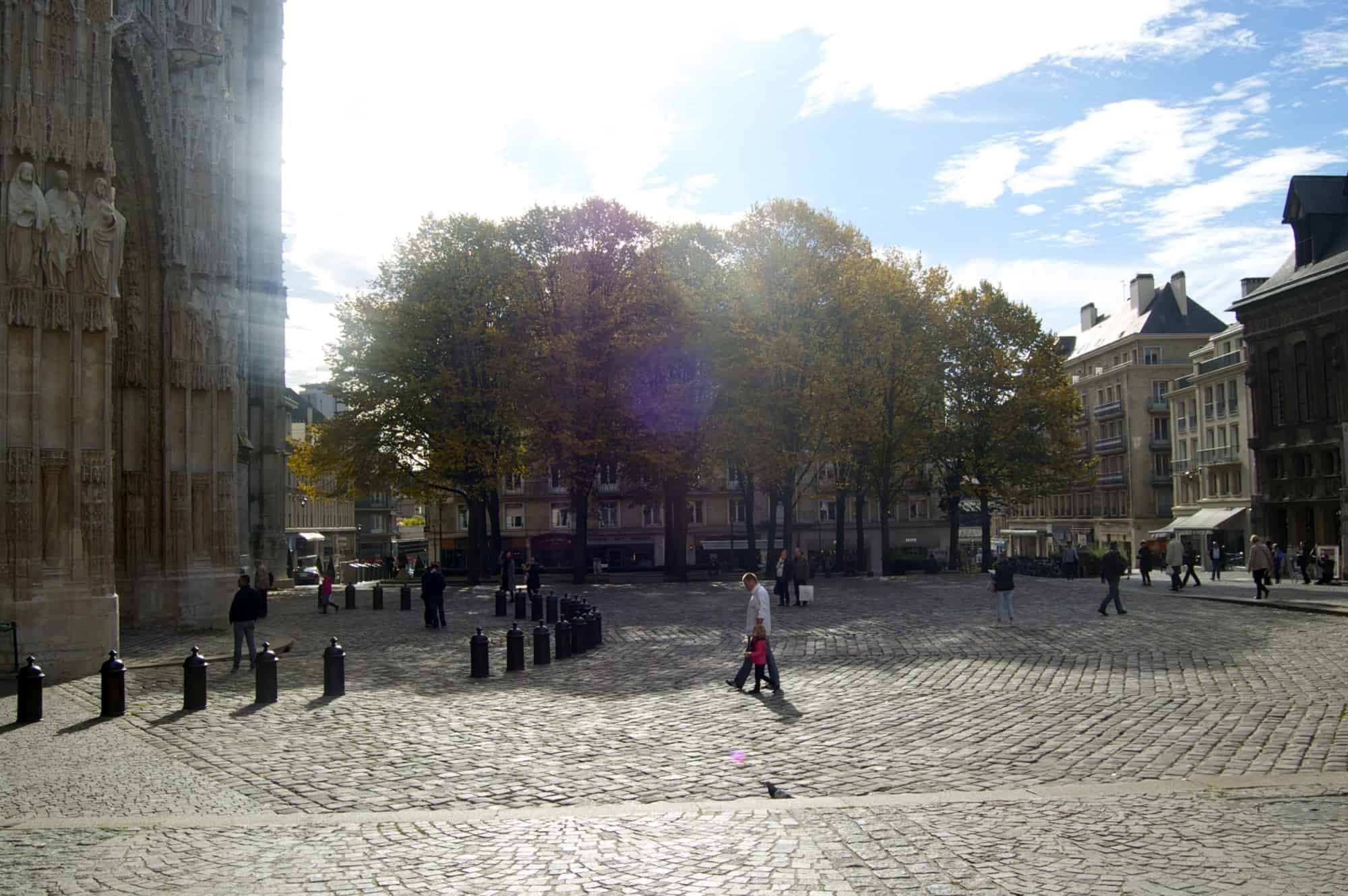 Wander the gothic churches of St. Maclou and St. Ouen before you arrive at Rouen Cathedral. You may recognize the startling structure from a series of over 30 paintings Monet produced over the course 1892. He worked on several canvases at once throughout the day – foggy and cool morning, harsh late afternoon, and soft twilight – using the grand, solid symbol of the cathedral to observe the ephemeral quality of light. Pass by the square, as Monet himself might have done, more than once to witness the various optical effects on the multifaceted stonework. 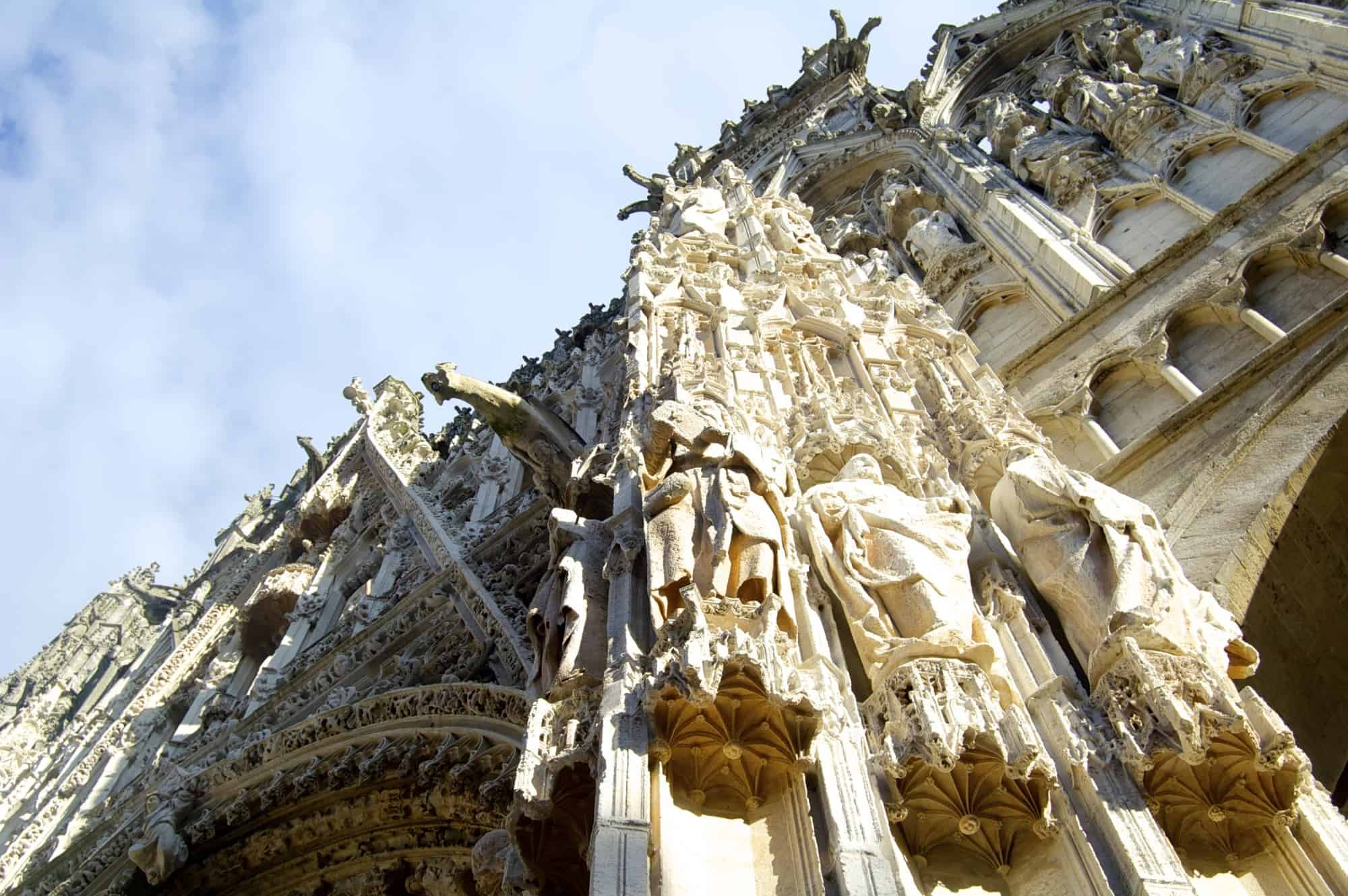 At the Place du Vieux-Marché, La Couronne, the oldest inn in France, originally built in 1345, still serves classic French fare to international food connoisseurs and old-school locals alike. Julia Child famously wrote of her three-course dinner here – which consisted of six oysters, sole meunière, green salad, and fromage blanc with berries – “the most exciting meal of my life.” If the menu prix fixe isn’t in your budget, sneak a peek inside for the photographs of well-known past diners and Baroque décor. 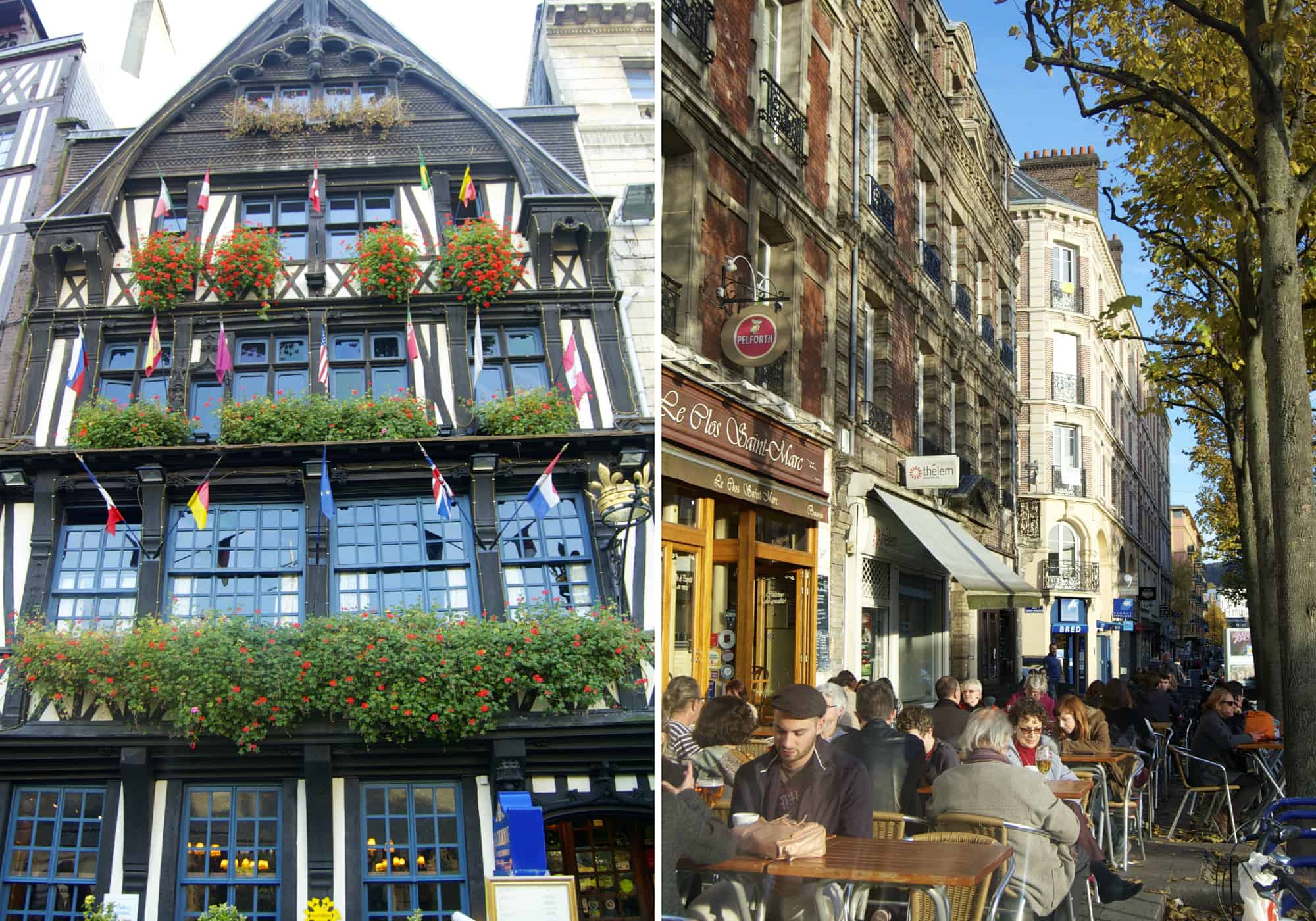 Literature buffs should consider adding to their itinerary a visit to the Musée Flaubert et d’histoire de la médicine. Readers may remember that Rouen Cathedral features in Gustav Flaubert’s Madame Bovary. A native of the town, he is buried beside his friend and fellow groundbreaking artist, Marcel Duchamp, nearby at the St. Sever cemetery. 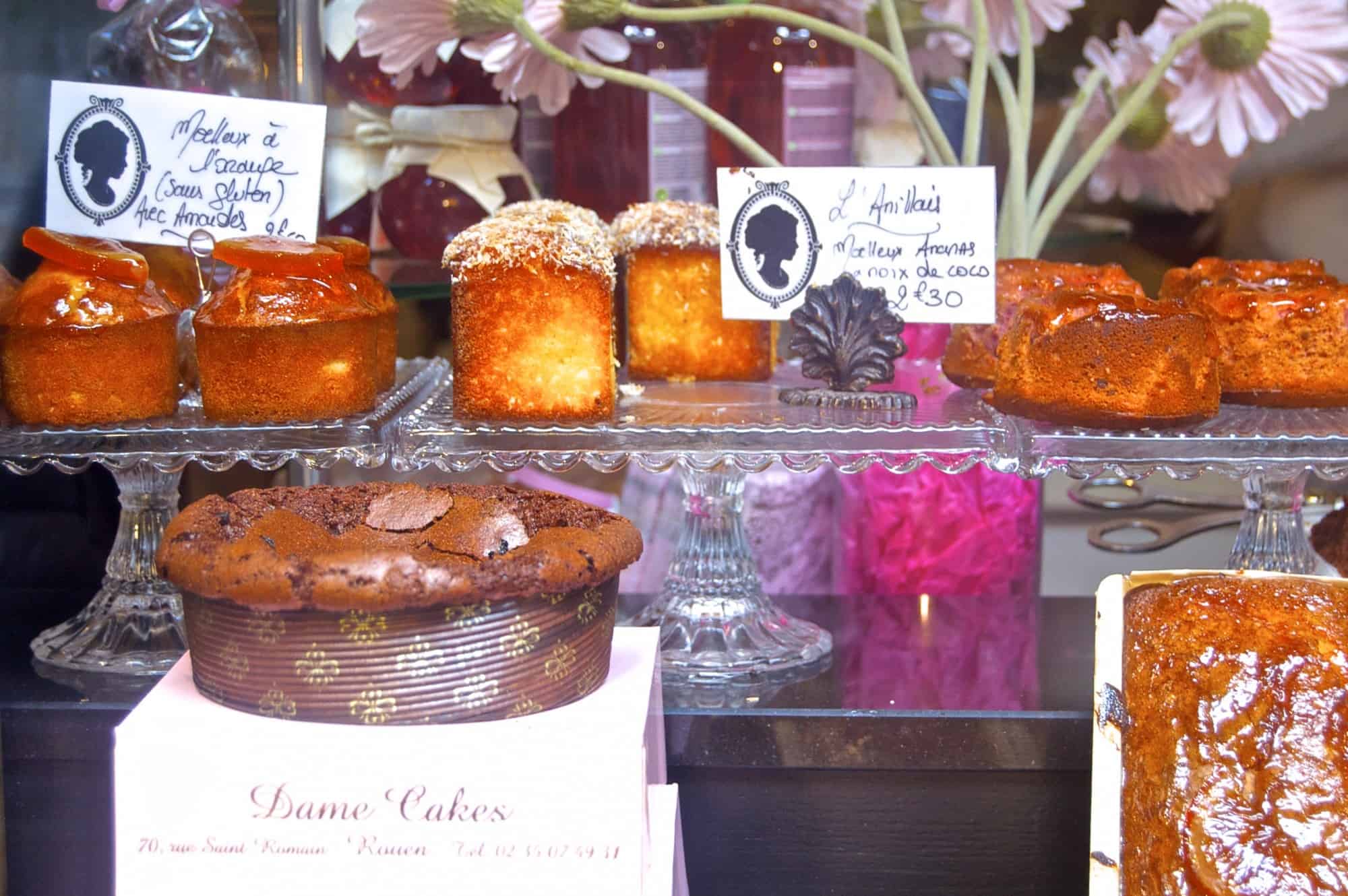 For an afternoon snack, stop in Dame’s Cakes, a chic bakery and salon de thé housed in a turn-of-the-century building across from the cathedral. Relax and stretch your legs for a while after choosing from a selection of homemade Norman cakes, tarts, and crumbles. 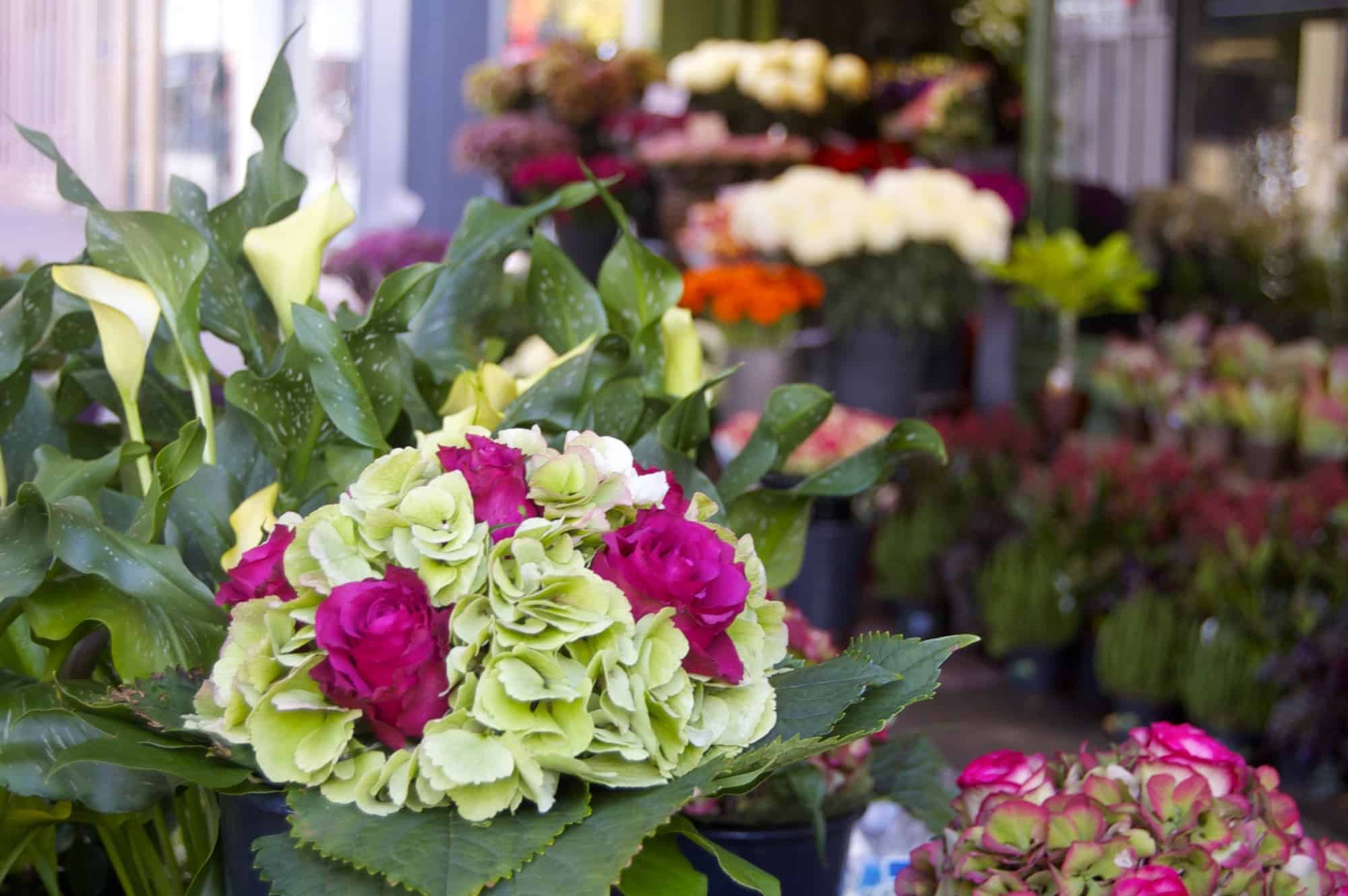 Don’t leave without feasting your eyes on the seasonal produce, meat, fish, fresh mounds of salted butter, teas, spices, and cheese, at one of Rouen’s 12 different markets. Want to take something back with you? Normandy is known for its beloved huitres, camembert, butter, cream, various apple desserts, and cider. 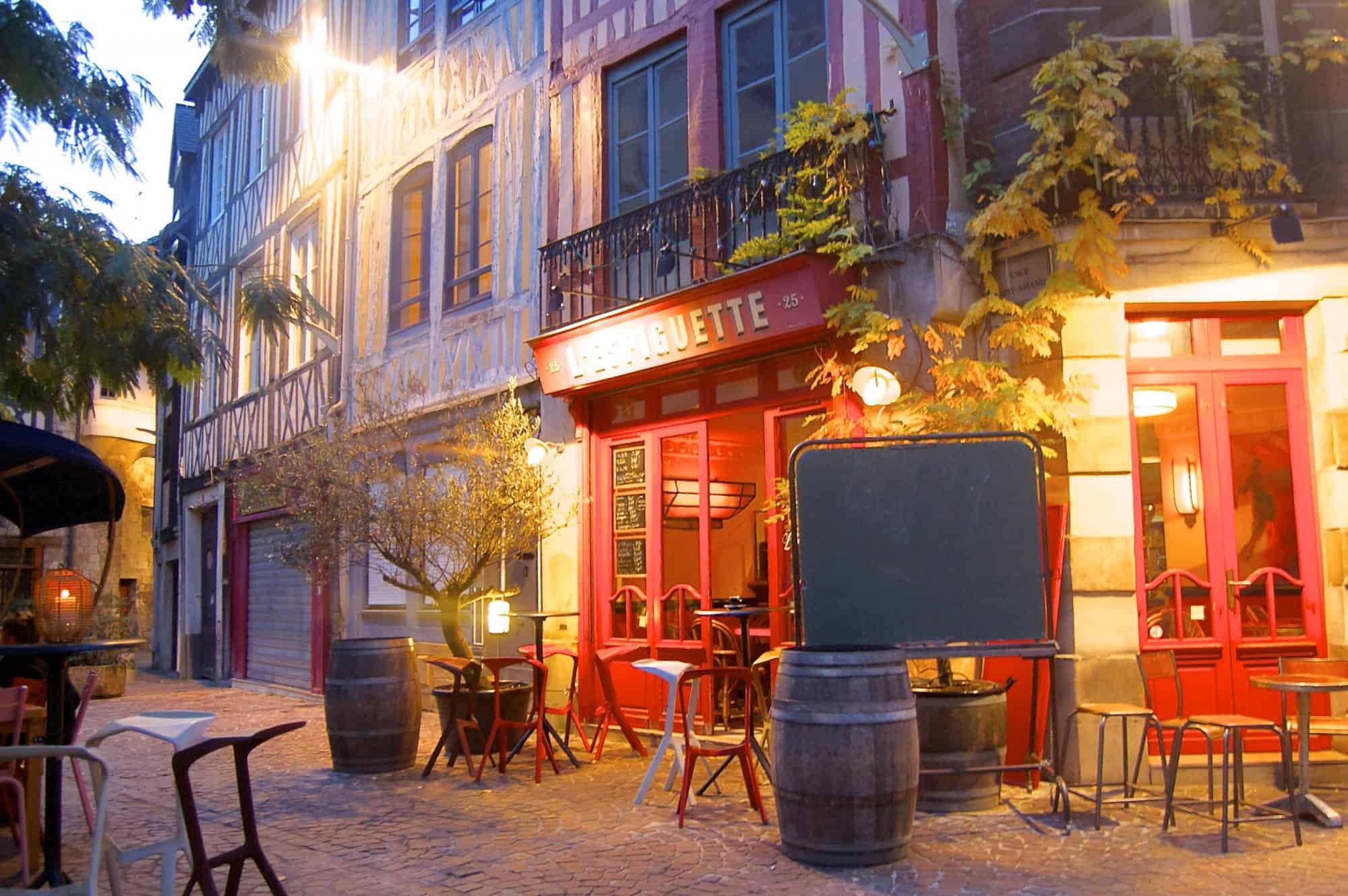 As the sun sets, tourists haul off and a university student population livens up the quiet alleys and pubs. Head to the intimate, art-deco L’Espiguette bistro, or the rue Eau du Robec, lined with casual crêperies, cafes with live music, and tree-shaded terraces for an apèro with locals before the restaurants open for dinner. 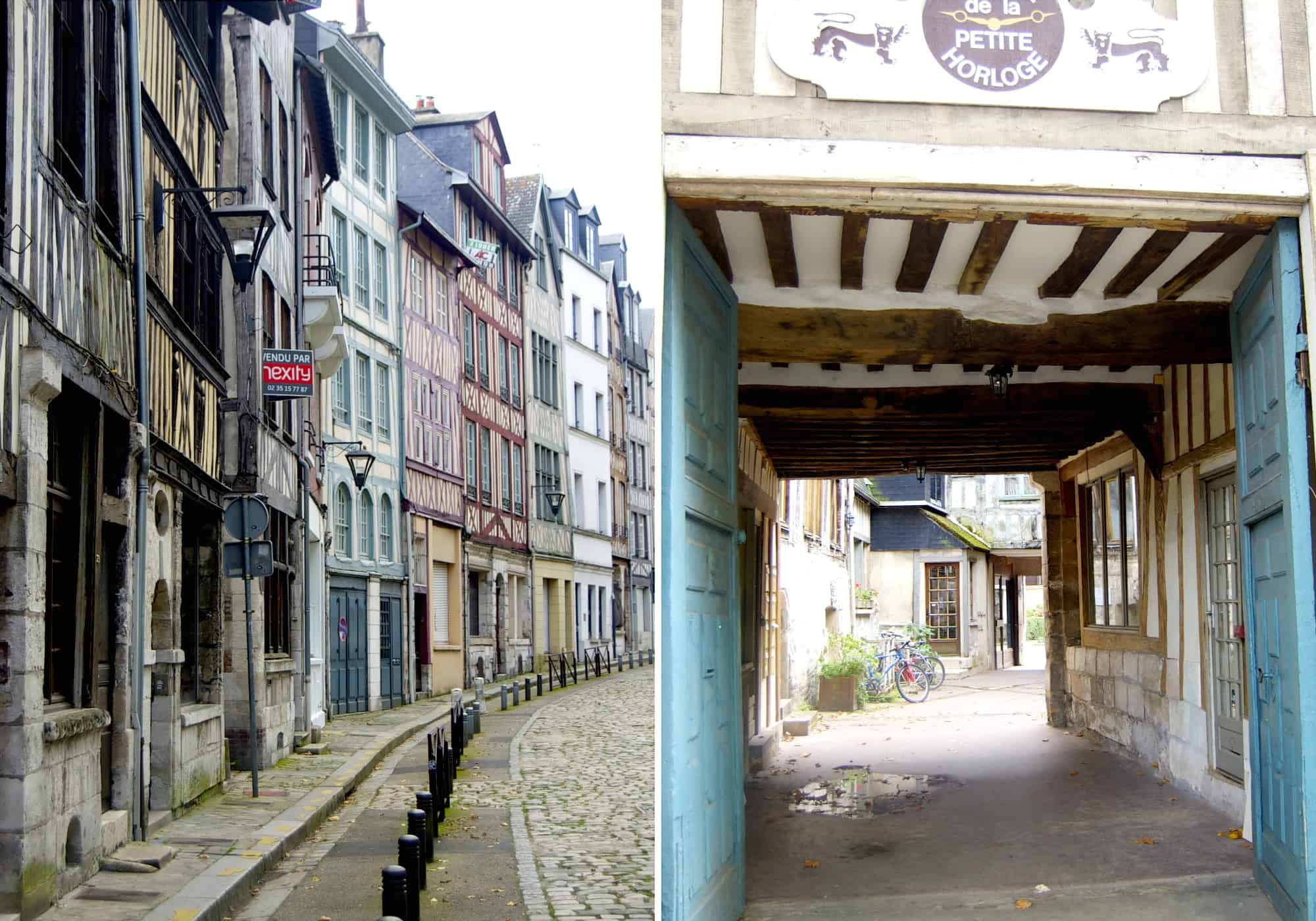 2 comments on “A Weekend in Normandy: Rouen Roaming”

I absolutely love it! so beautiful
xx Lina