Ariane Haas of The Naughty Notary and Lily Heise of Je T’Aime, Me Neither sit down to discuss their favorite addresses for a romantic (and sexy) Valentine’s Day in Paris. Still looking for a gift for your chéri(e)? Peek below for exclusive discount codes for HiP Paris readers! – Erin 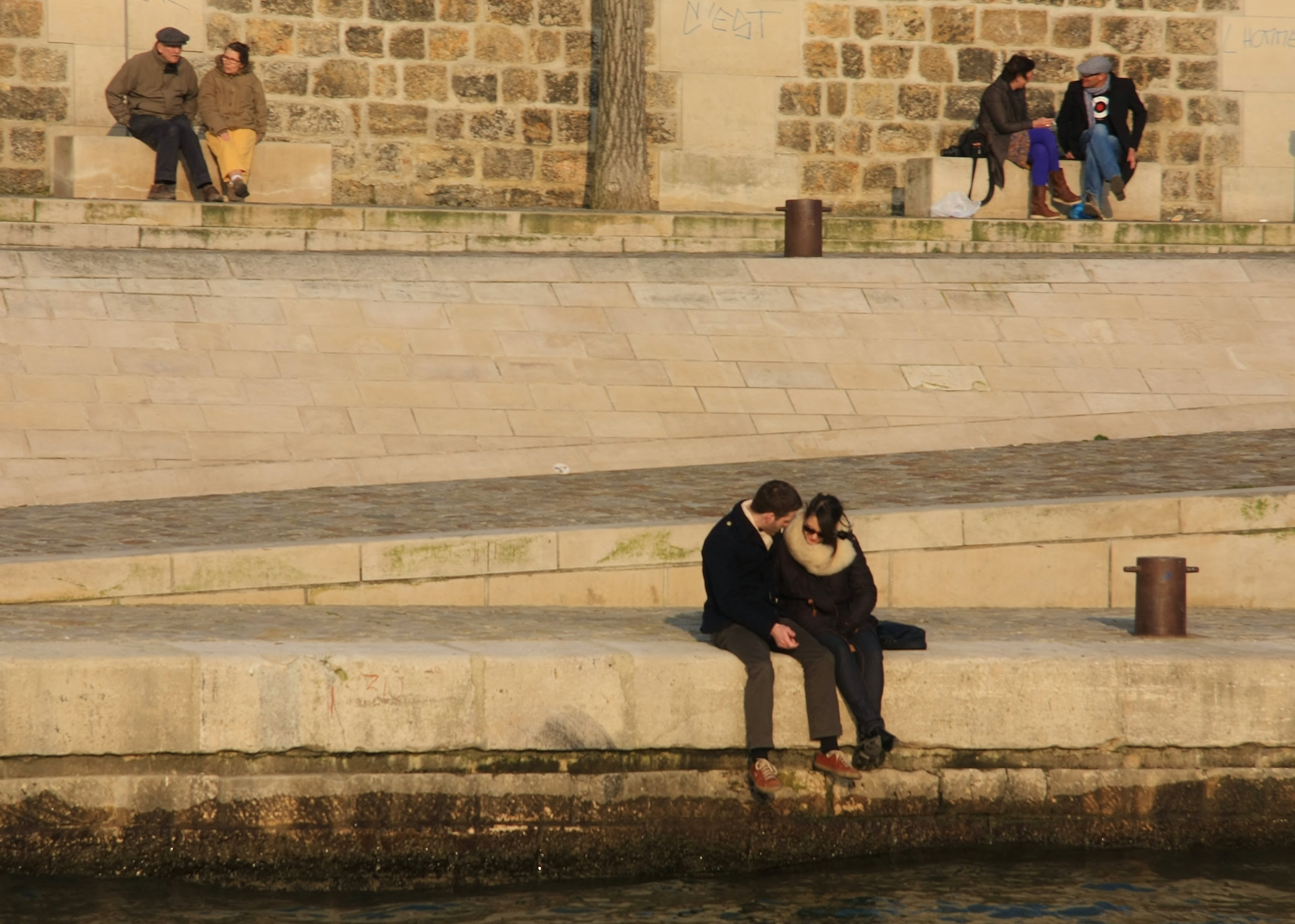 Ariane: A hidden secret of sensuality underneath your winter coat on Valentine’s Day — or any other day of the year — is perhaps the sexiest way to treat yourself, whether single or coupled up. Dollhouse is the perfect Parisian destination in the historic area of Le Marais, that combines the erotic worlds of lingerie, sex toys, and every other sexy bedroom accessory you can think of. Treat yourself or the one you lust after to a truly decadent and chic experience shopping at this eclectic boutique that is sure to pay off for nights to come. And with the possibility to privatize the dimly lit, magenta walled boutique, the options are endless for starting your day off with sexy on your mind. 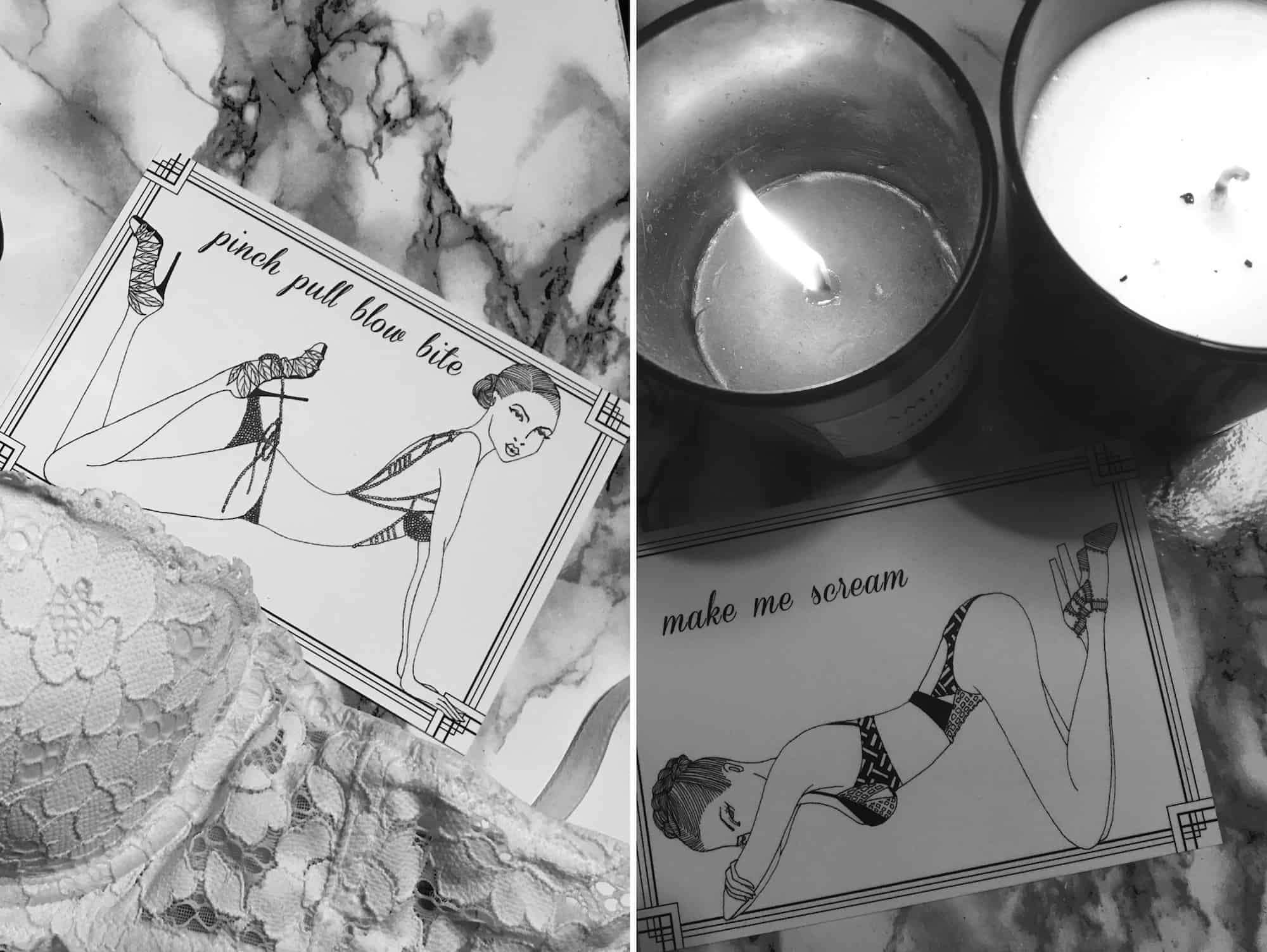 Lily: Speaking of hidden, the Marais has some of the most seductive secret gardens of Paris. Many of these are found within a block north or south of rue Rambuteau/Francs Bourgeois, offering the perfect opportunity for a seductive stroll. You may want to start with the Jardin Anne Frank, tucked away at the end of a cul de sac behind the centre Pompidou. It is a relaxed and tranquil haven with cuddly lovers’ corners and a communal vegetable patch. Further up the road, you can play aristocrats in the gardens of the National Archives in the Hotel de Soubise palace. Once the gardens of the noble private mansions of this block, you can access this green oasis via the right of its stunning courtyard, creating an enchanting and opulent ambiance…. and the perfect place for some smooching.

Carry on back down Francs-Bourgeois, turn into #35-37 and there’s an entrance in the courtyard of the l’Hôtel de Coulanges to the Jardin des Rosiers-Joseph Migneret. In this secret garden you can surprise your sweetheart with one of the few remaining towers from the 12th century Philippe Auguste wall. Take the opposite exit onto rue des Rosiers — where you may want to pick up a falafel or other snacks to go — then loop down to rue Saint Antoine taking it east until you come to the Hotel de Sully, a fabulous former private mansion with a beautiful back garden. In the far right corner there’s a secret passageway into Place des Vosges, where you can end your amble by lounging on the grass or over a drink at one of its café terrace. 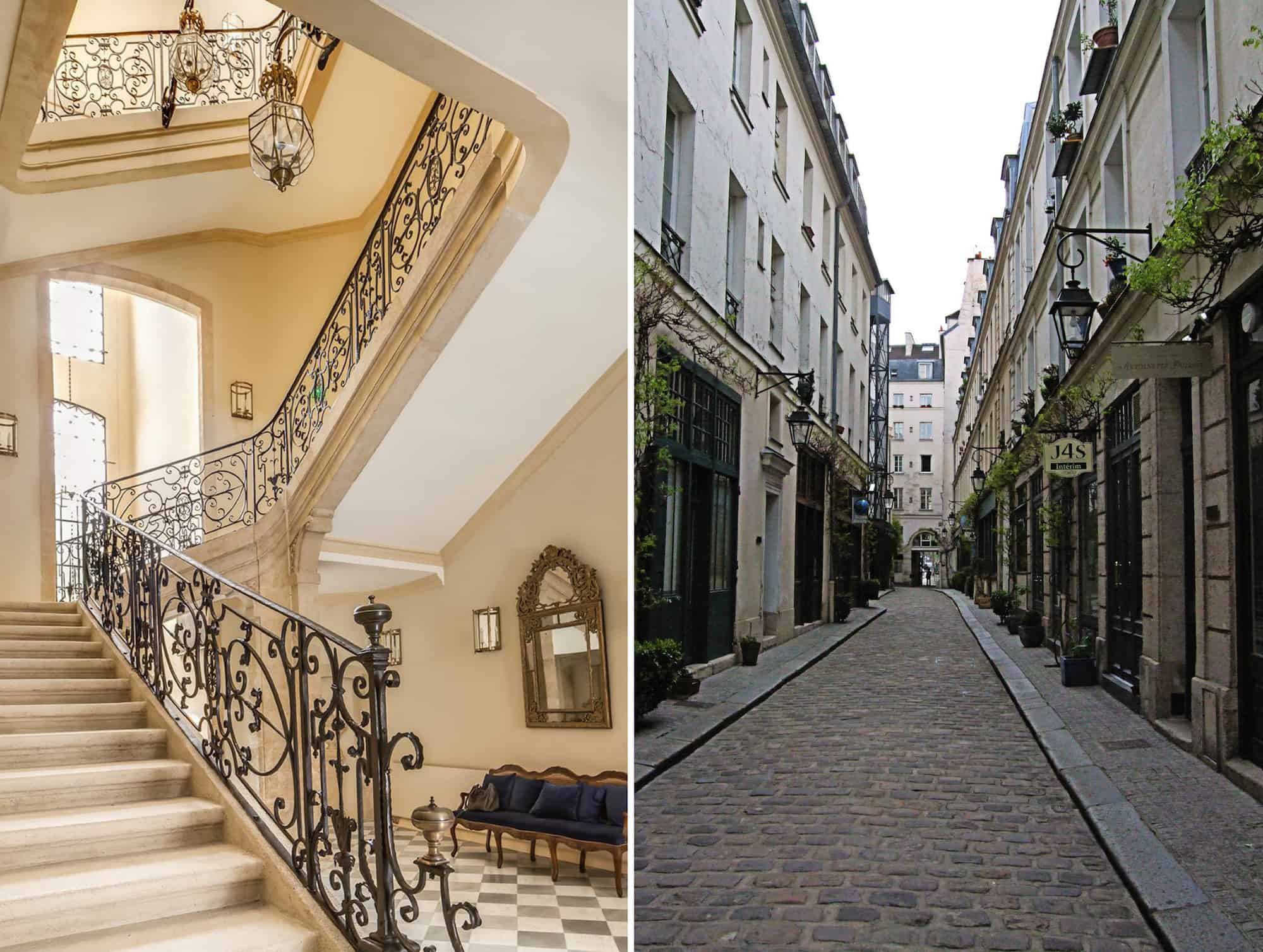 Sexiness & Love off the Champs-Élysées

Ariane: Paris is famous for its cabarets and cancan dancers, but the true jewel of the burlesque scene is Crazy Horse. Situated in a former wine cellar in the ultra fancy Champs-Élysées neighborhood, the venue is small and intimate, the stage not far from the audience. Vignette after dreamlike vignette features the classically bobbed dancers as moving works of art, carrying out choreography with expert precision. Breasts and booties on display under twinkling lights, the female form takes precedence as the Crazy Horse stage indulges you in fantasies you never even knew you had.

Lily: On the other side of the Champs-Élysées is the showcase of another sort of passion, that of art collecting. As this new part of the city was being sketched out by Baron Haussmann in the mid-19th century, banker Edouard André bought a plot of land to build a sumptuous mansion. He and his future Nelie Jacquemart would gradually fill its elegant rooms with la crème de la crème of Old World artworks, amassing one of the world’s most important private art collections. Now open to the public, a visit to the Musée Jacquemart-André almost feels like you’ve been invited over by the society couple’s for afternoon tea — which you can actually have in its gracious café, or, weather permitting, in its terribly romantic courtyard. 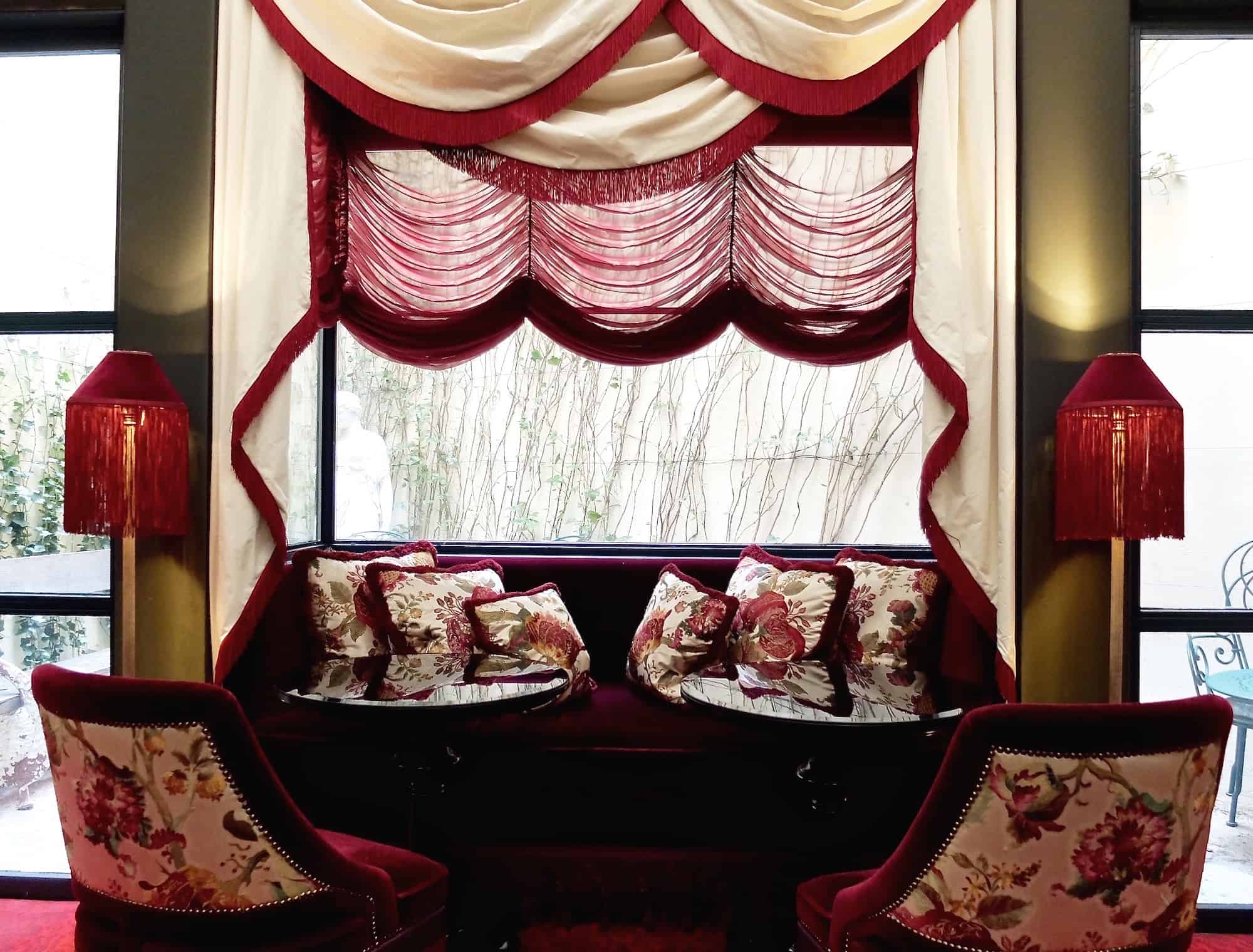 Ariane: If dim lighting, black and white tiled floors, and red walls aren’t enough to put you in a sensual mood, just tuck yourself into one of the leather Chesterfield couches at Le China. Though a full menu of Asian food is available, the real power of Le China is its cocktail list featuring all the classics (martini fans rejoice), and unique drinks thought up by top barmen (try the Balsamico Rosso for something truly special). The mark of any truly sexy bar? A sexy bathroom. Its soft yellow lighting, floral wallpaper, and a full length mirror punctuate the experience. Take advantage of the bathroom’s boudoir vibes by sending a quick message to whomever is waiting for you on a Chesterfield downstairs — don’t be afraid to let them know what activity awaits them later in the night. 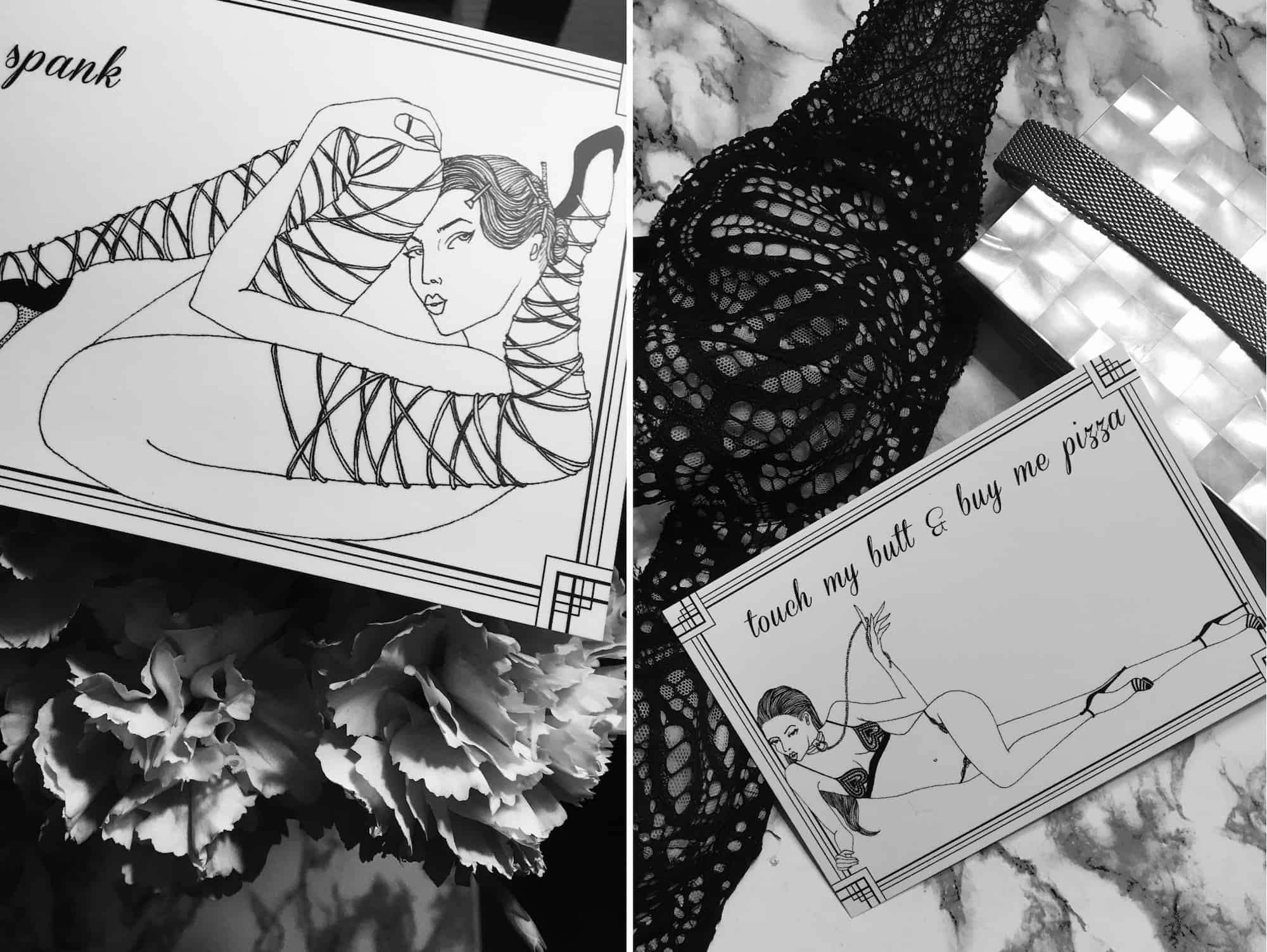 Lily: If intimate, lowly lit places are what you’re after, then why not explore the Bastille area’s many hidden passageways. Located outside the old city walls, the land east of La Bastille became home to a large number of artisanal workshops, namely for woodworking and the decorative arts. You can embark on your stroll right in front of the Bastille métro with the Cour Damoye. A whimsical vine-covered and cobbled alley, it’s lined with offices, galleries and even one of the oldest coffee roasters in Paris, la Brûlerie Daval, in business since 1945… its wafting aromas might tempt you inside for a gander. Working your way along larger rue Faubourg Saint Antoine, you’ll find a series more rustic workshop passageways, like le Passage du Chantier, which still has some furniture makers and restorers. Slink down le Cour de l’Étoile d’Or, le Cour des Trois Frères and le Passage de la Bonne Graine to track down any vestiges of the former ateliers… or some dark corners to steal a kiss! Eventually you’ll make it to le Cour de la Main d’Or, one of my personal favorites, where you can grab a drink around the corner with the locals at l’Ami Pierre (5 Rue de la Main d’Or). 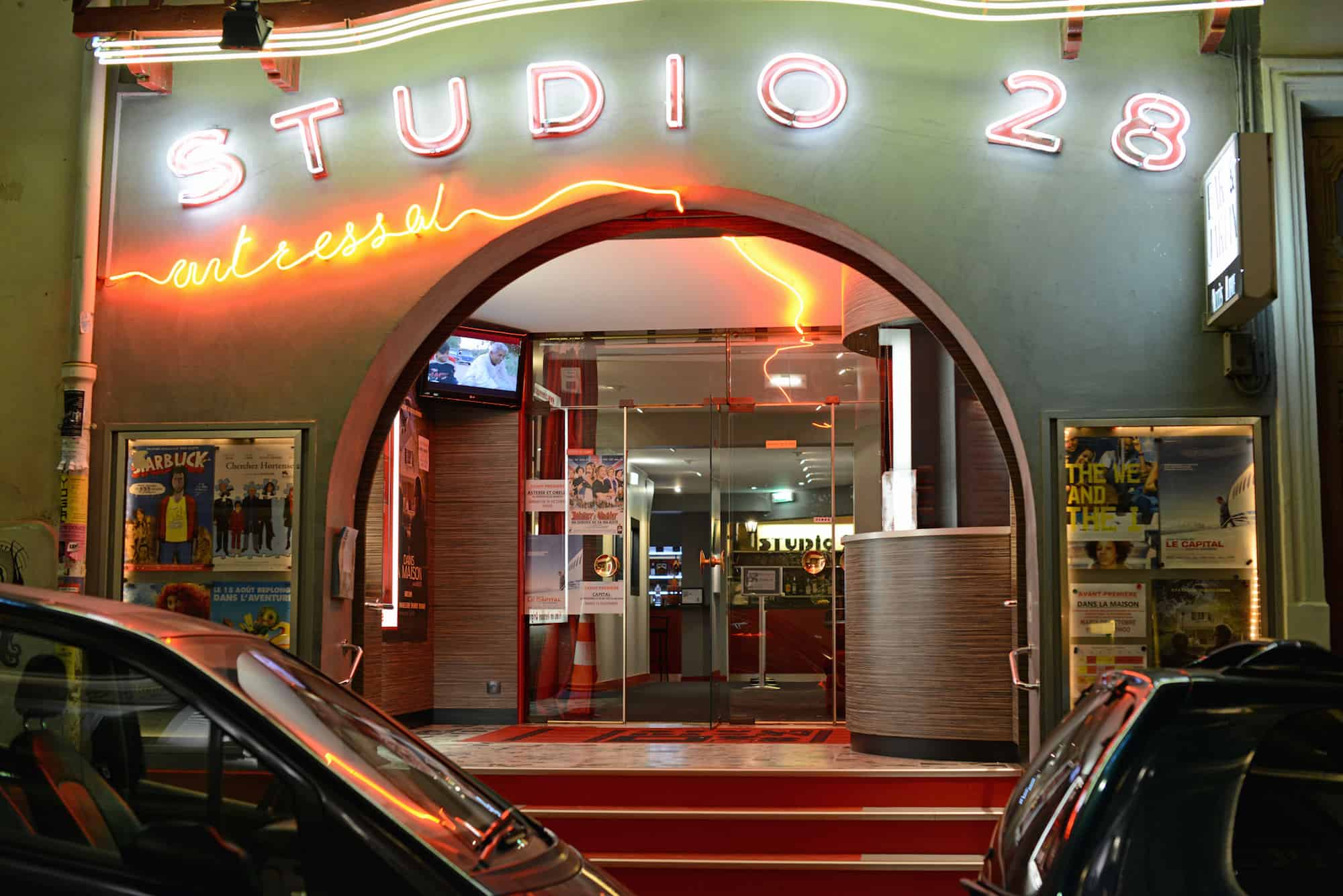 Ariane: Going to the movies is a pretty basic date night idea, right? Well, not when your movie going destination is the Max Linder theater on the Grands Boulevards. Built at the beginning of the twentieth century, the 580-seat room was known for showcasing burlesque cinema. Though it’s a century later and the movies on show are contemporary hits, nothing about the theater itself has changed. Kick back in a velvet chair in your choice of orchestra, mezzanine, or balcony seating, and take in all the grandeur of a basic date made much less basic by some art nouveau surroundings.

Lily: Another cinema with some fascinating — yet slightly less risqué — history is Le Cinéma Studio 28. Opened in 1928, this art house cinema on a quiet side street in Montmartre played an important role in early days of cinema by promoting the works of Abel Gance, Jean Cocteau and the Marx Brothers. It also caused quite a stir in its early days for being the first to screen Luis Bunuel’s controversial film “L’Age d’Or”, which was consequently banned. Today the small theatre screens a selection of mainly independent films and hosts events like Lost in Frenchlation, a group that presents a French film with English subtitles — a nice date idea which can get started off or close with a cocktail in the cinema’s garden bar.

Ariane: Let’s face it, whether you’re part of a couple or not, the sexiest thing you can possibly do is to treat yourself. To relax, to indulge, and to spend time with and on yourself. There is no better way to gift yourself a day of pleasure than by going to one of the many hammams Paris has to offer, such as O’kari. Sweat out all your stress surrounded by tiled mosaics and soft lighting. Breathe in the subtle herbal aromas while your skin tingles as it plunges from tropical temperatures into a gently chilled pool. Leave feeling refreshed with impossibly soft glowing skin and a haze of relaxation that lasts beyond the hammam walls.

Lily: For a taste of the Orient without having to take off your clothes (not like there’s anything wrong with that!), make your way to l’Institut du Monde Arabe. This important center of Arab culture is housed in an avant garde building designed by French architectural star Jean Nouvel. It’s strategic location, design and collection have many intrigues for lovers. Take the elevator all the way its rooftop terrace and you’ll be granted one of the best views of la belle derrière of Notre Dame. All yours free of charge or you can savor the view over a cup of mint tea and delicate North African pastries in their stylish tea salon. Afterwards, admire the unique window design of the metal and glass windows, inspired by traditional Arab window shades. Then have a “One Thousand and One Nights” experience touring the museum — make a game with your sweetheart by seeing who can first spot the different representations of love and couples in some of the artworks… or find the magic genie lanterns to make some romantic wishes… to come true later on. 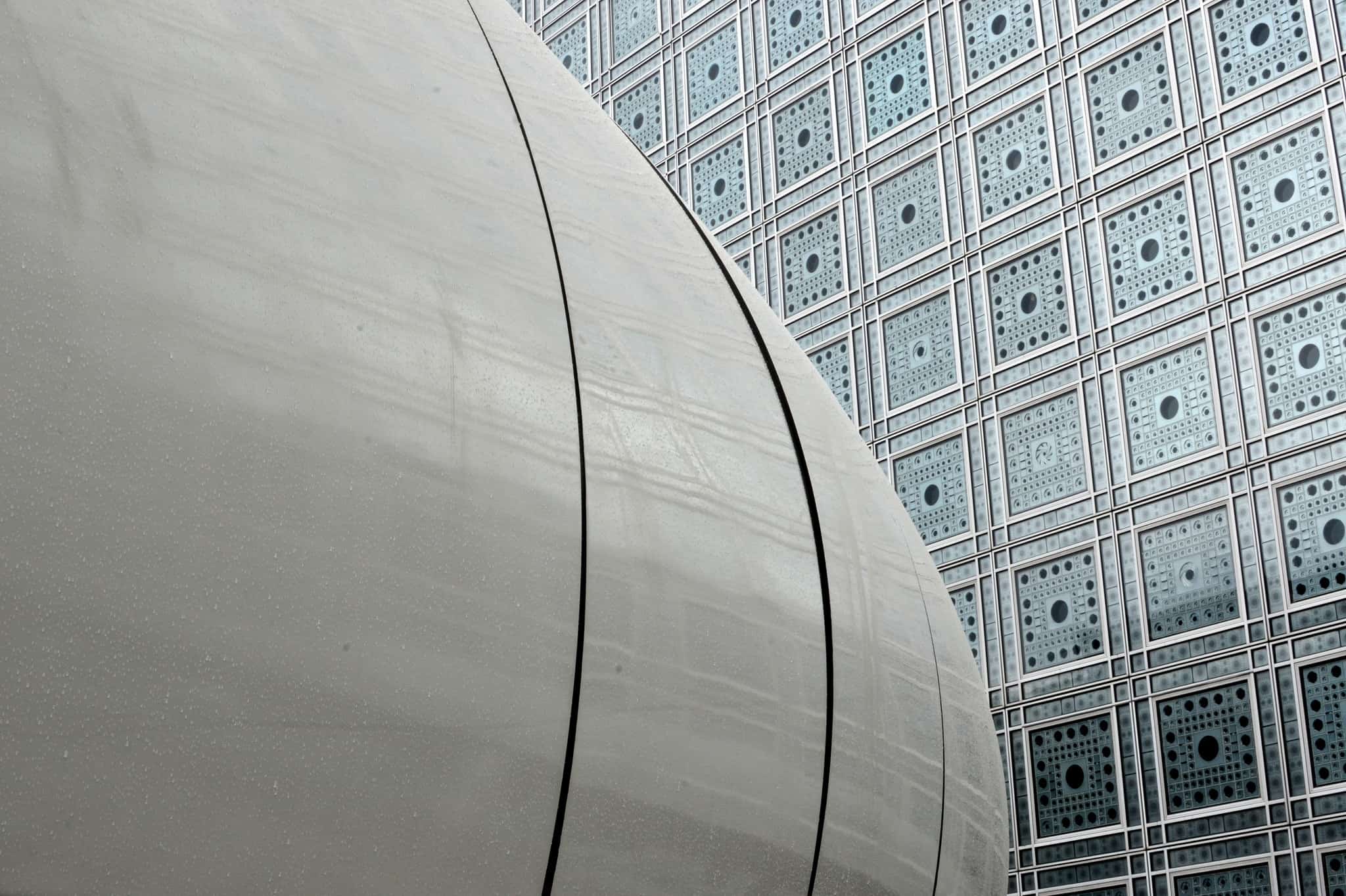 Ariane: In the famed red light district of Pigalle, you’ll find Lipstick: a bar with all of the cliché signs of a sexy atmosphere. Red velvet, soft red lighting, a leopard print couch, and even a stripper pole. What could be tacky and cheap ends up feeling like a hidden boudoir, a total escape from the streets on the other side of the door. And the best part? The wallpaper: a collage of vintage tea stained erotic imagery, never letting you forget that though it’s a cocktail bar now, Lipstick was formerly a bar à hôtesse, a popular style of bar that existed as a loophole after brothels were made illegal. Steeped in a history of salacious activity, the soft red glow oozes with lust.

Lily: Pigalle indeed exudes naughtiness and sensuality, you can experience the swank side this at nearby Maison Souquet. Located in a former 19th century maison close, or brothel, this small boutique hotel has been designed by Jacques Garcia, of the Hôtel Costes fame, who aimed to recreate the boudoir lavishness of the Belle Epoque. Open to outside guests, you reach the bar and restaurant via an elaborate, tiled Arabesque foyer. The bar area is outfitted in plush red velours seating, period paintings, antiques and a fireplace. A glamorous place for an apéro or rather naughty nightcap. 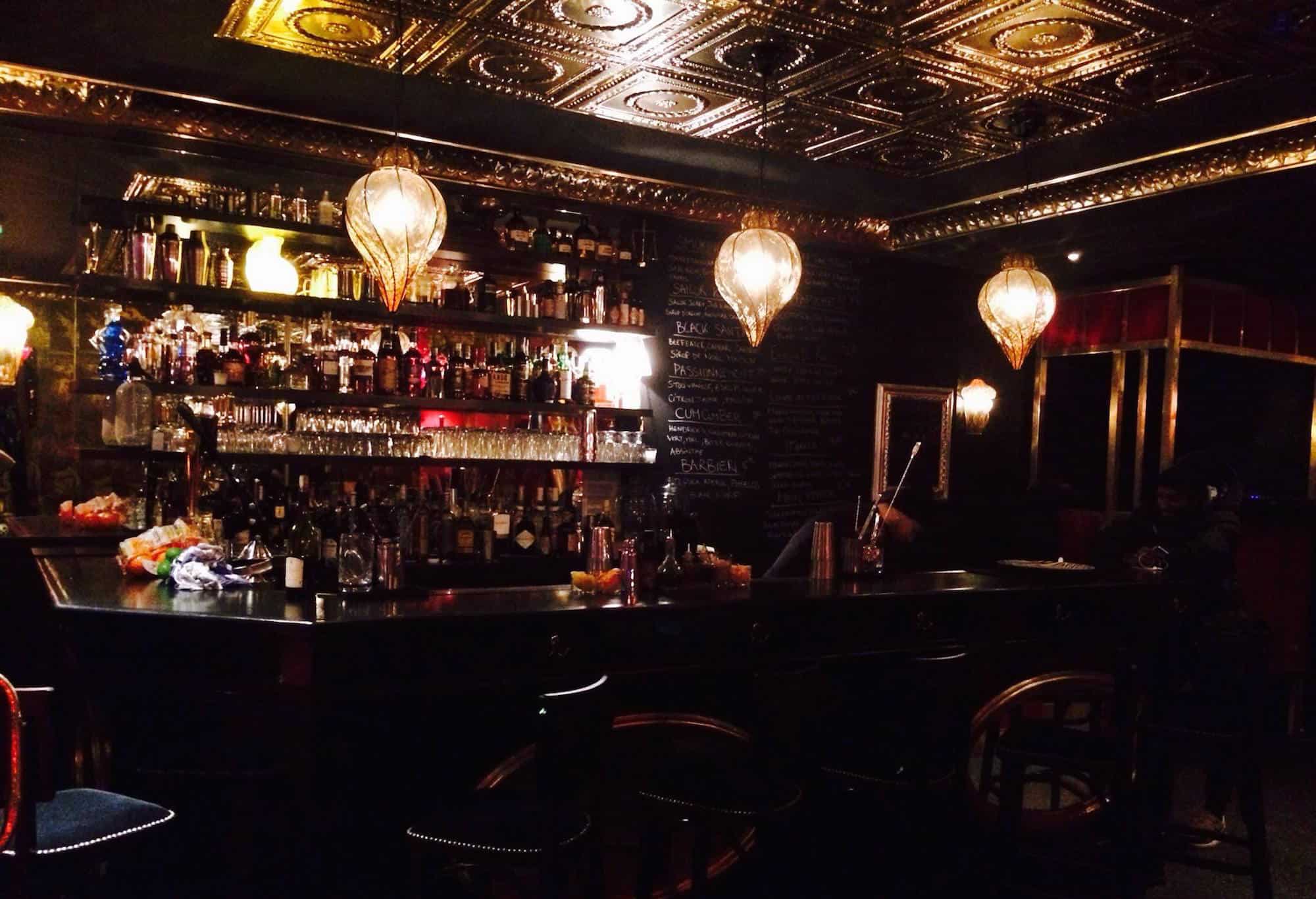 To celebrate Valentine’s Day, Lily is giving a 50% discount the kindle version of her new book, Je T’Aime… Maybe! From now until noon on February 15th, you’ll be able purchase the e-Book via Amazon here, from the site you can also read the book on your computer.

No need for Valentine’s Day to be the only day you put the emphasis on your carnal cravings; postcards from The Naughty Notary are a fun bold gesture any day of the year. Illustrated by Ariane, they’re sure to turn up the heat hanging on your wall as art or gifted to a lucky lover. From now until Friday at midnight, shop The Naughty Notary and get 20% off your purchase by entering the promo code HIP17 at checkout.

Written by Lily Heise for the HiP Paris Blog. Looking for a fabulous vacation rental in Paris, London, Provence, or Tuscany? Check out Haven In.

Have followed your blog for a year. Love keeping in touch with Paris between visits. Wondering if you talk about same sex couples in Paris, or topics that include same sex couples. Thanks very much.