What better way to start the new year than a series on kitties in Paris and all that entails; from choosing the kitty, taking kitty to the vet, to finding a kitty sitter and all the fun, trials, and tribulations of animal ownership in the City of Light. Enjoy, and stay tuned for more Parisian kitty entertainment as the series unfolds! – Erica 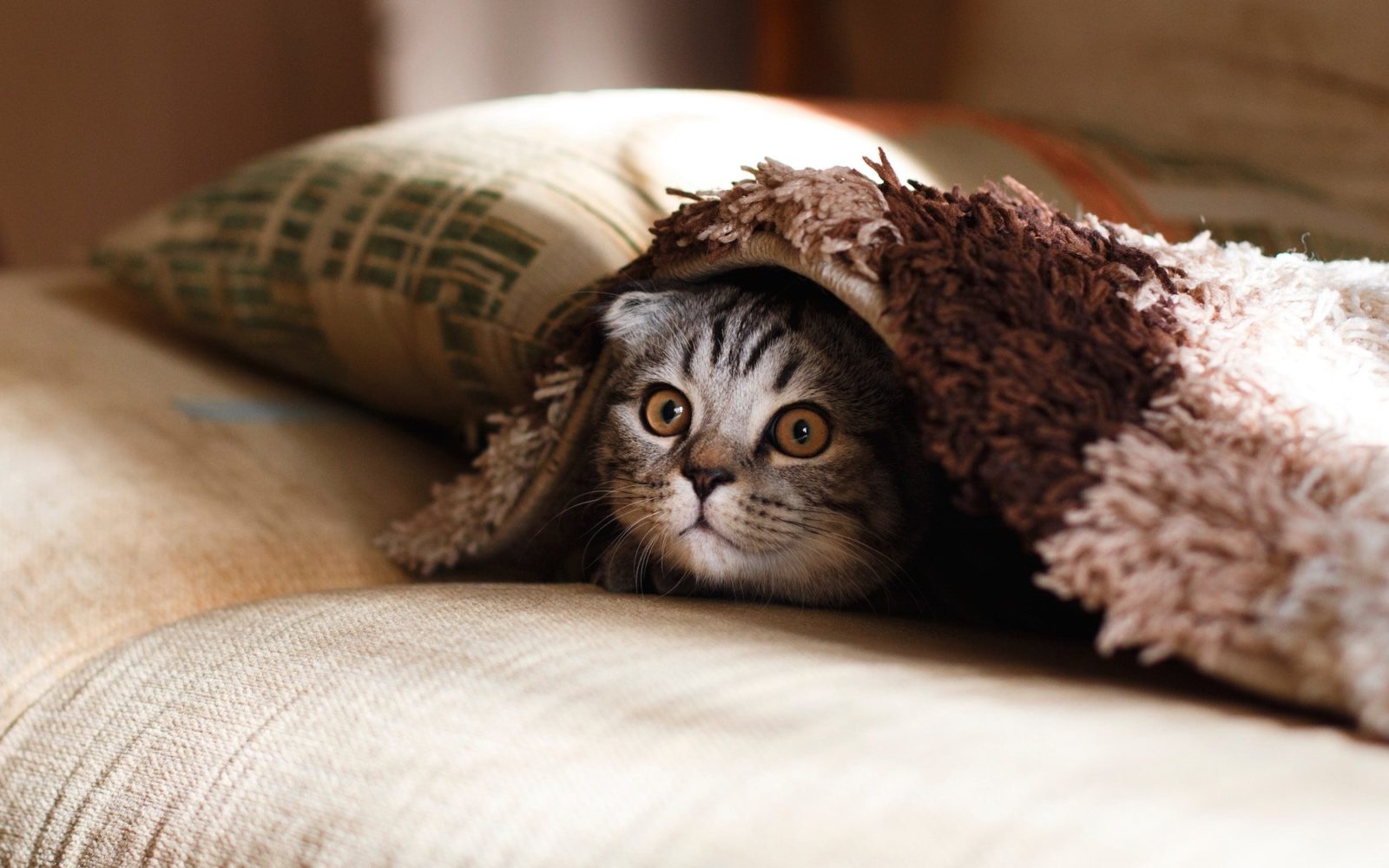 My parents were both country people and they taught me everything I needed to know about animals.

There are two kinds of animals: livestock and protectors. Livestock give their bodies, or the products of their bodies, for our food. Protectors keep away snakes, rodents, tarantulas, coyotes, and burglars. Protectors may also herd cows.

Pets fall into one of those two categories, and you don’t get too attached to them because both categories are not long for this world. Livestock will be eaten, and protectors often die in the line of duty.

Pets may come into the house in the evening to sleep on the floor while you watch TV, but they go outside for the night. Delicate pets may get to sleep in an outbuilding.

My grandmother, who loved me dearly and occasionally spoiled me, let the cats sleep on the fold out couch with me. The cats and I both knew it was wrong, but it felt so right.

Then I got married. 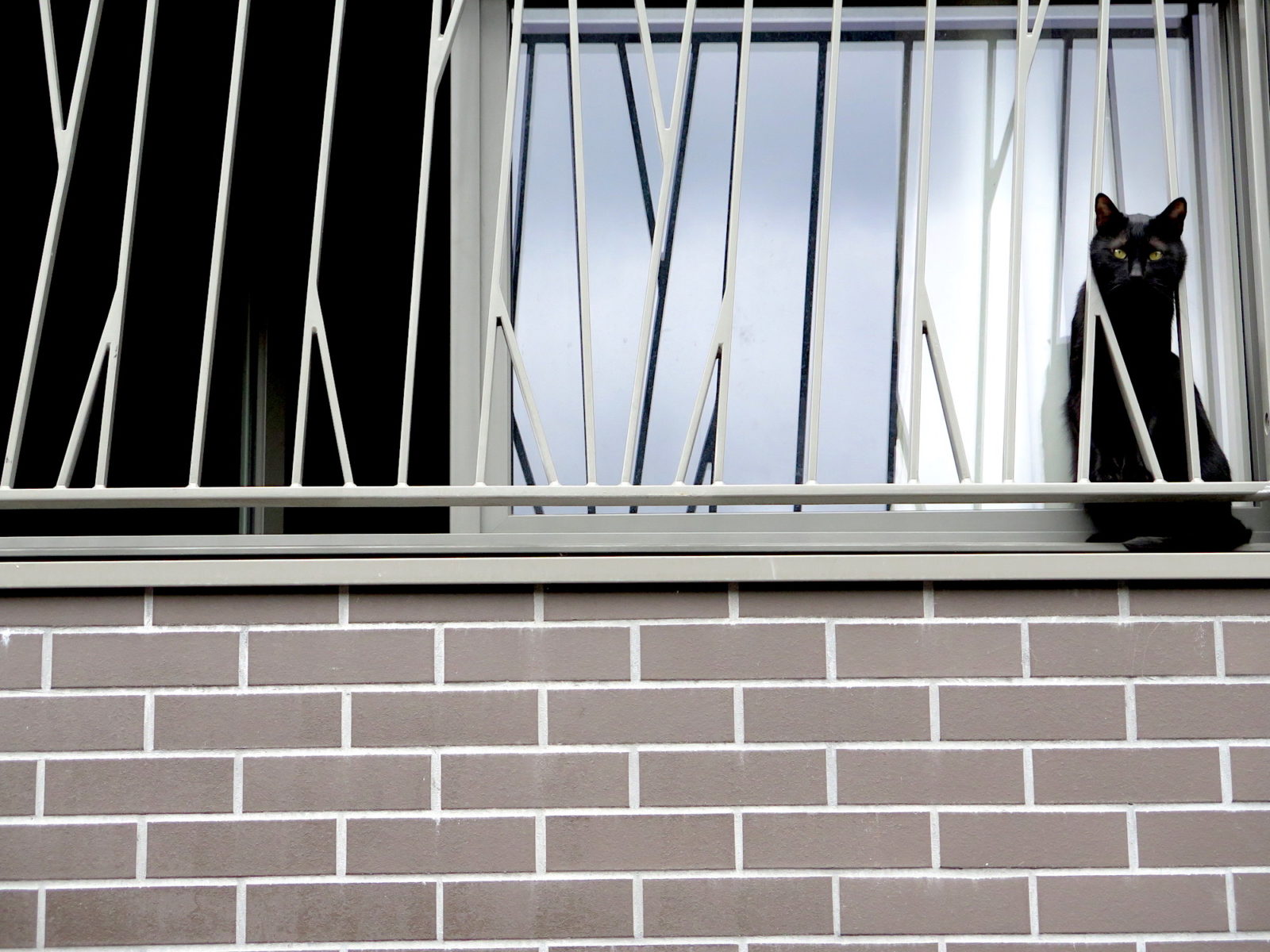 My husband, Sam, had a completely different view of pets. He was raised in a Hong Kong high rise and pets lived indoors. They bore no responsibility for producing food or protecting the family. They were slackers.

After we got married, we did pets Sam’s way because he viewed my way as cruel. When we had children, they naturally adopted Sam’s way because children always go with the parent who gives them the most fun. We have had a string of cats, dogs, guinea pigs, fish, birds, and hermit crabs. All in the house, all useless. 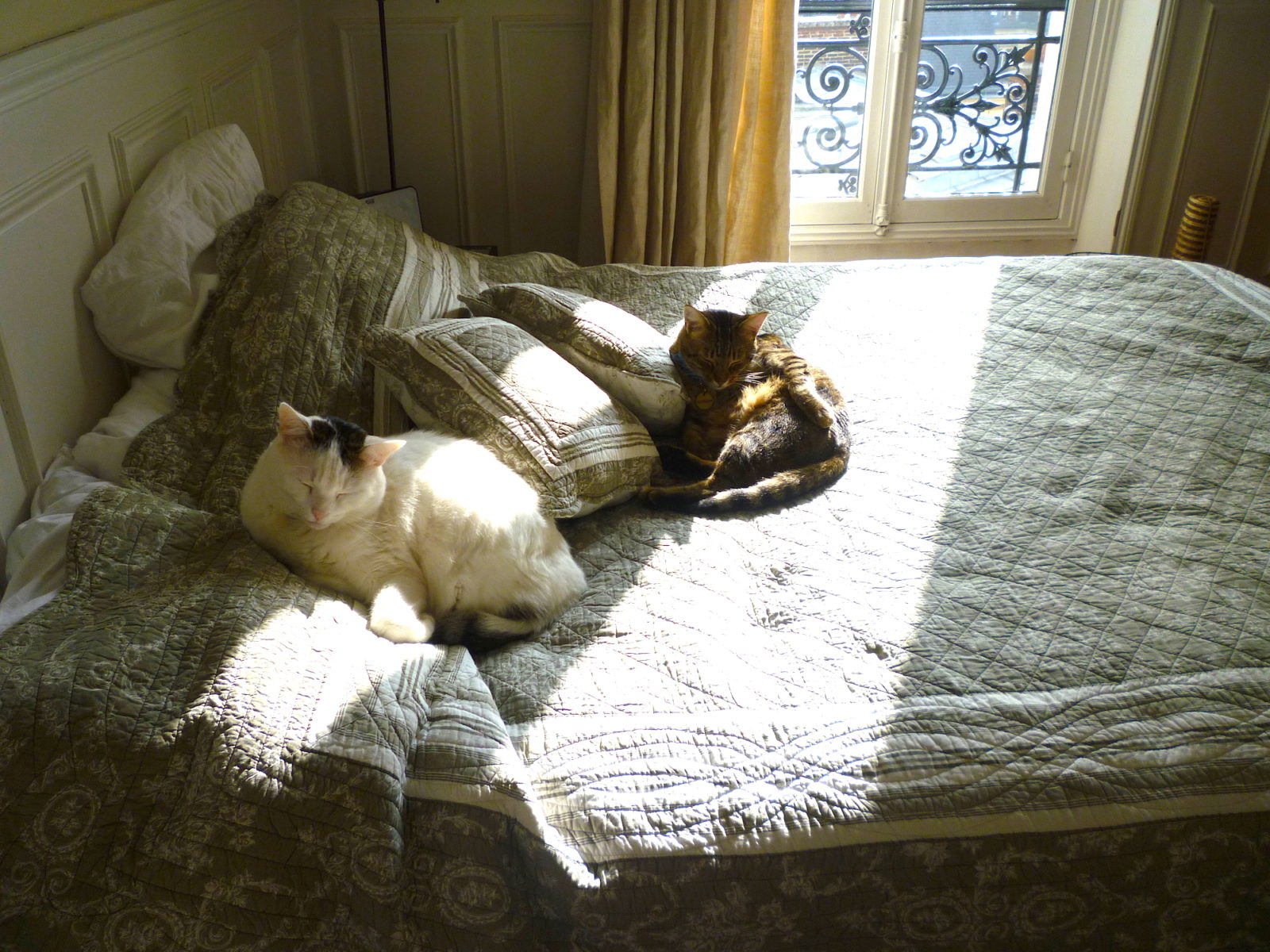 By the time we moved to Paris, I was tired of pets.  I was tired of lint-rolling my clothing—I have enough self-generated wardrobe malfunctions, I don’t need any help. I was tired of putting my snack on the table, going to get my book, and returning to find my snack gone and the cat licking its paws under the table. I was tired of smelling pee and replacing furniture that had been desecrated. I was tired of standing in my pajamas in the backyard in the dark begging the dog to hurry up and do it. I was tired of hearing close the door quick or Muffy will get out! when I had an armload of groceries. Tired of it all. 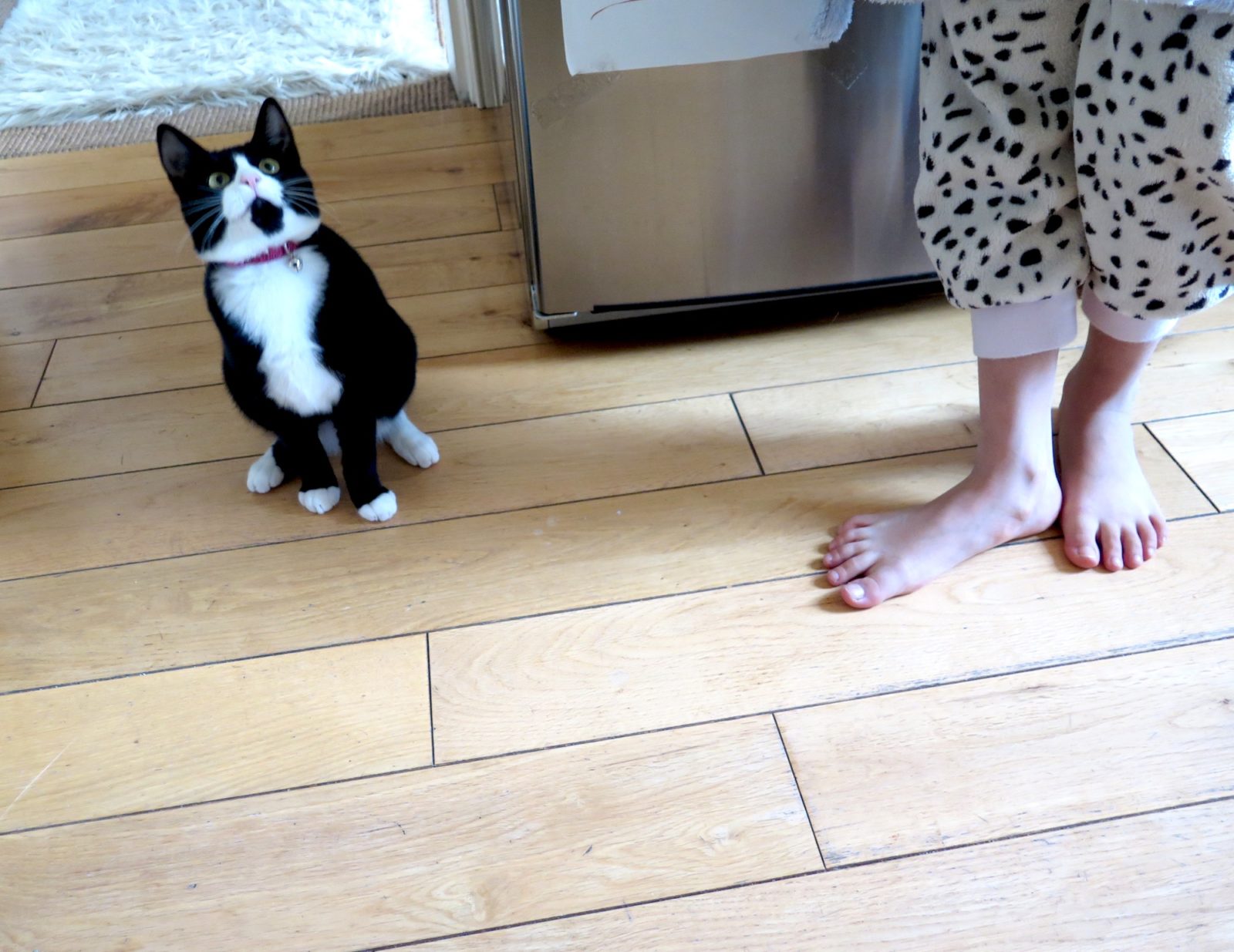 That’s why I put my foot down when we got to Paris. No pets. Caleb was the only kid left at home, and he’s going to college in four years, so there was no use getting pets.

However, it soon became clear that the entire future happiness and wellbeing of two-thirds of the family was in jeopardy unless we got a cat. I, the remaining third, was the odd one out. The two-thirds promised that I would never have to lift a finger for the cat. I would never smell pee. I could banish the cat to and from whichever rooms I pleased. 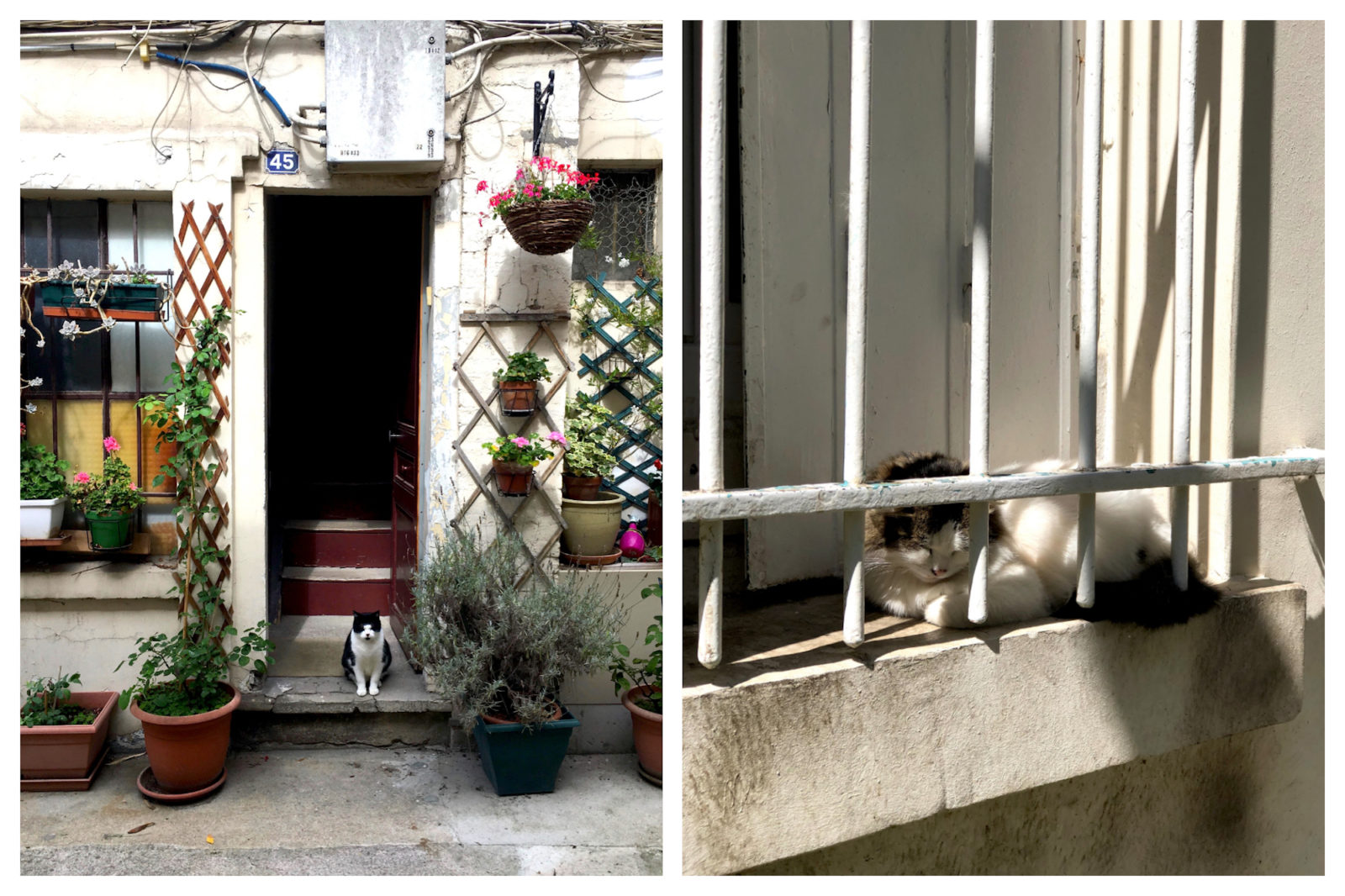 The pleading and Caleb’s beautiful soft brown eyes did me in. I caved, adding the conditions that I would not help in the kitty-search, the cat would be short-haired, and when Caleb goes to college the cat’s destiny is TBD. Everybody agreed.

So one day Sam and Caleb, both minimal French speakers, headed off on a kitty hunt. I pranced off through Paris by myself, happy that I did not have to assist. 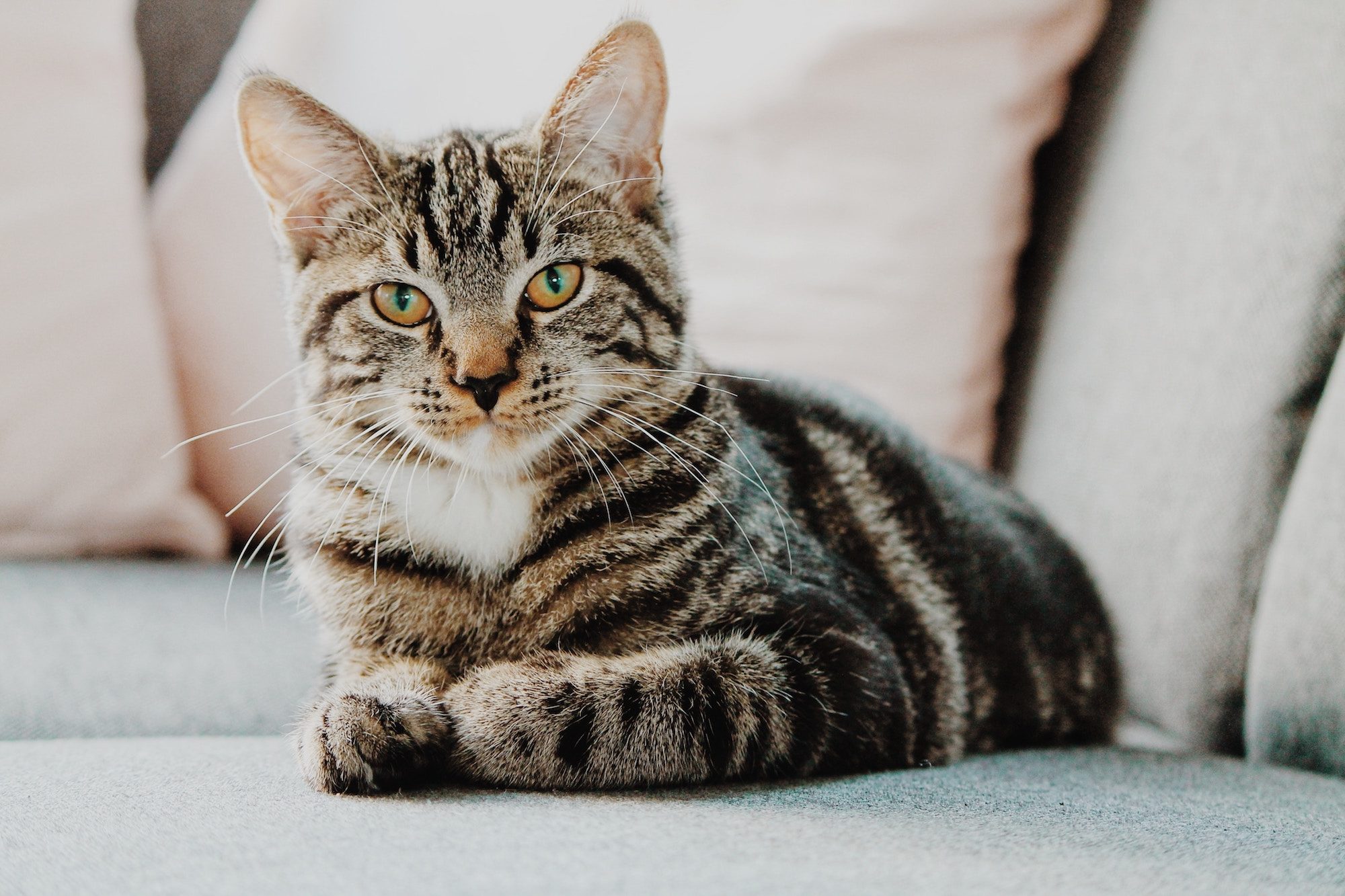 Then I got the call. Sam, using that polite hushed voice he uses when he’s talking on the phone in front of people, kindly and urgently requested that I come to the adoption agency immediately and speak French. The cat people wouldn’t adopt out a cat unless all family members agreed to it in person. Also, Sam said, these cat people were really super-concerned about their cats’ future home and had been lecturing Sam and Caleb quite seriously in French about the duties involved with Paris cat-owning. If I didn’t come convince them what good cat owners we were in my best high-school French, the deal was off.

Then Sam pulled his trump card. “Do it for Caleb.” 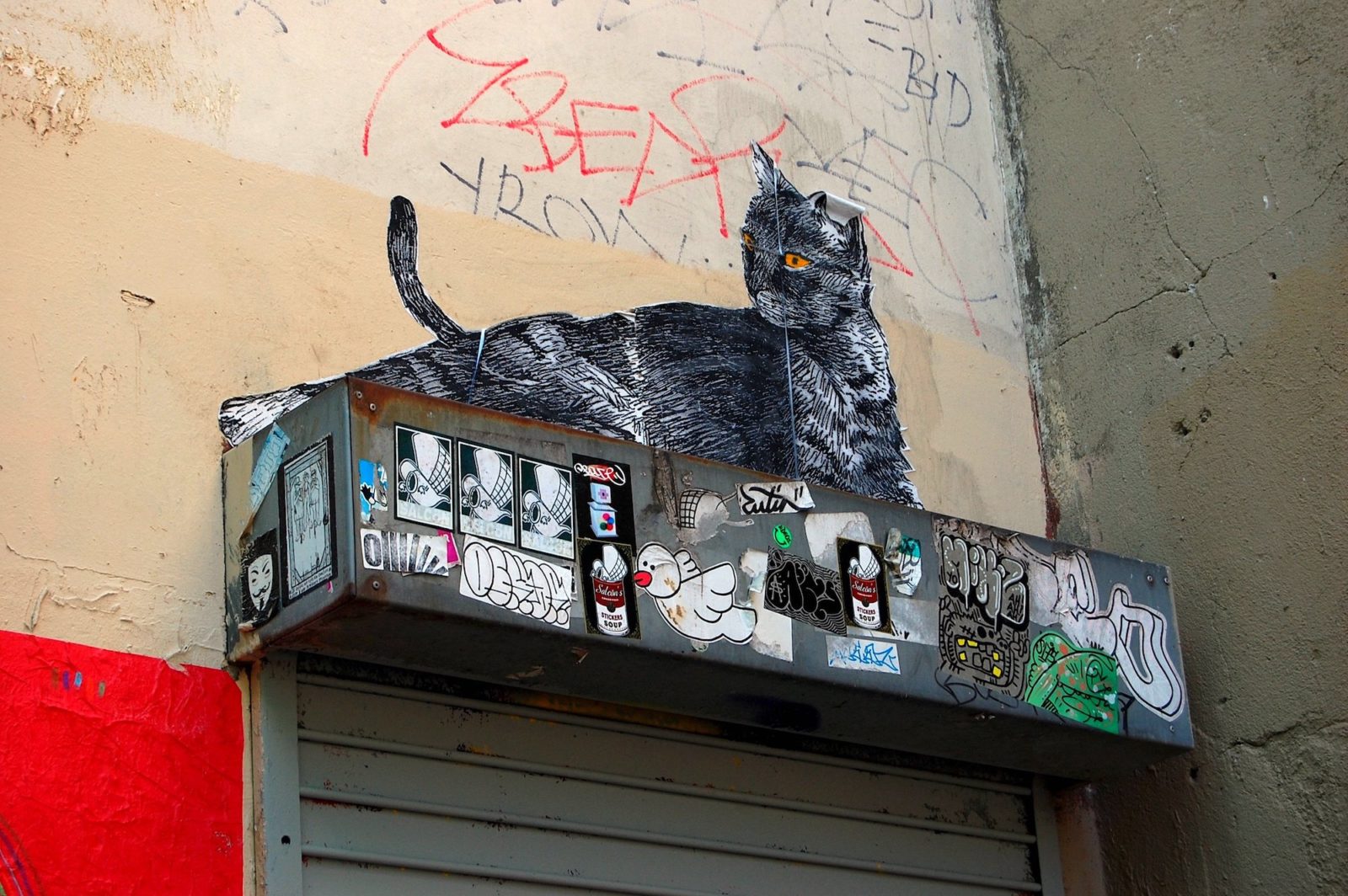 Written by Yvonne Shao for HiP Paris. Looking for a fabulous vacation rental in Paris, London, Provence, Tuscany, Umbria or Liguria? Check out Haven In. Mention the code: HiPParis18 for special deals and a bottle of champagne with every booking for all HiP Paris readers!

absolutely love this topic and the pics are stunning – parisians and their kitties are a culture in themselves!

Aww thanks for your kind words. Stay tuned for three more parts of the series!

Loved it, but it was a bit of a wall-crash when I discovered the story is to be continued…..
🙁

Being a big cat lover, this is the kind of story I love and can’t wait for part 2!