Moving to Paris is already an adventure, but we decided to make it more exciting by adopting kittens. I had to utilize my high school French skills and even lie a little bit, as described in Parts 1 and 2 of Paris Cats. Today, we discuss cat care in the city of light.

We adopted two skinny kittens in Paris, and my husband, Sam, and son, Caleb, promised to do 100% of the care because I was suffering from Pet Fatigue. We’d had so many pets when we lived in California that I was just done with them. Sam and Caleb promised to do all the cat care, but these good intentions were thwarted by the fact they didn’t speak much French when we got to France.

Pet care in France is similar to pet care in the United States, with a few notable exceptions.

When we lived in California, cat health care was fairly easy. We drove them to the vet to get fixed and vaccinated. If they got sick we went back and the vet patched them up. Once Bubble ate Christmas tinsel and almost died before he pooped out a big shiny ball. Mimi liked to pee in dirty laundry and we paid $800 to get her tested for every disease imaginable before the vet determined that she was just evil. The list goes on.

Now, let me introduce our French cats to you: Coco is a pretty good cat, but MiuMiu is truly the devil. He occasionally chooses to relieve himself outside the litter box, and therefore has lost my trust. He is banned from all rooms except two. He also fell out the window once, just like Cat Man from the adoption agency predicted. It was a good 30-foot drop to the courtyard. He didn’t have a scratch on him, and no signs of concussion or internal bleeding when the concierge found him and brought him back upstairs. I guess he’s down to eight lives now. My husband Sam has become codependent on MiuMiu and makes endless excuses for him, but I’ve told MiuMiu he’s just one pee away from a return trip to the cat adoption agency. 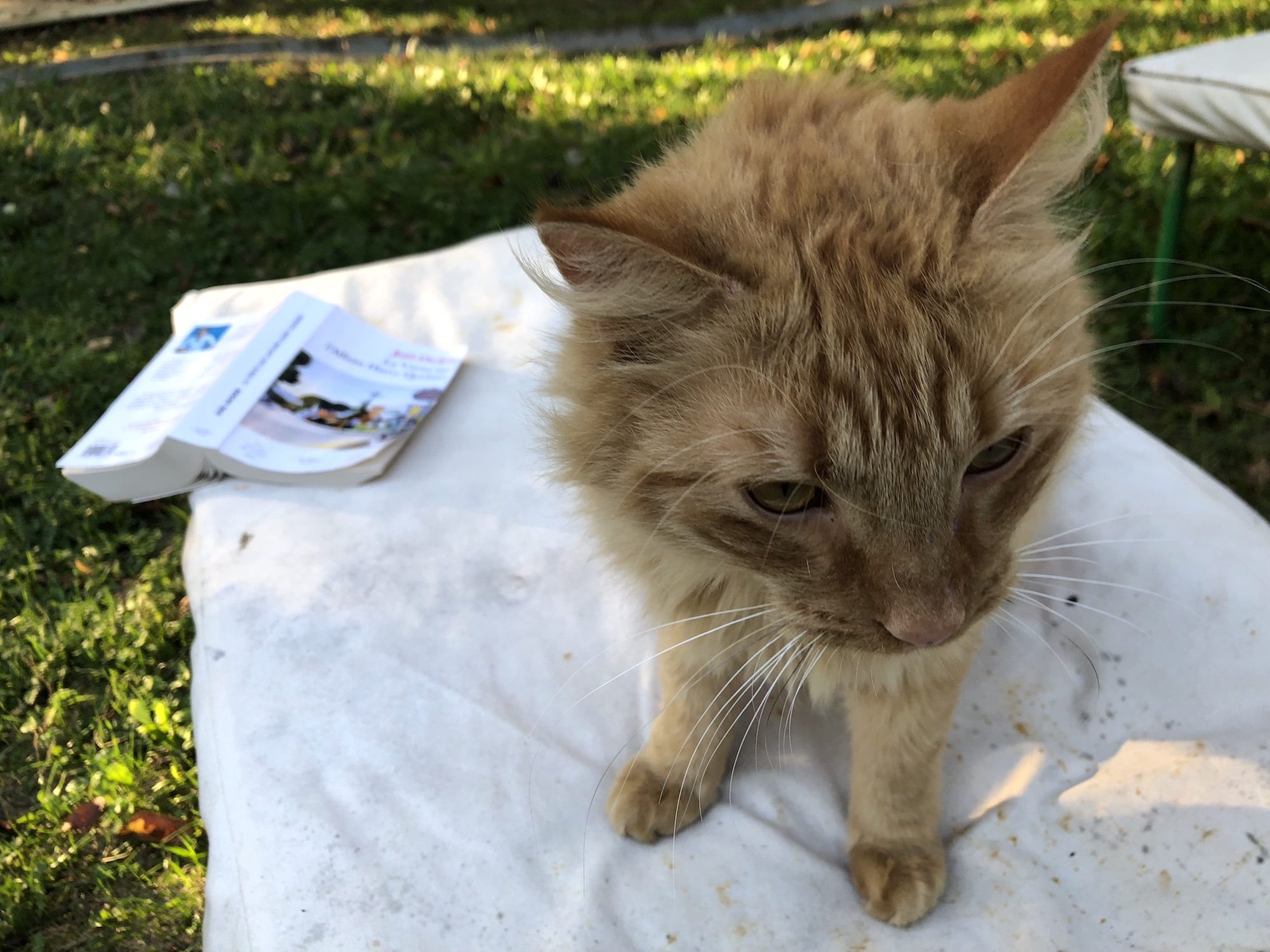 When Sam took them for their first vet visit, he stuffed them into their carrier and hauled them onto the metro. They howled nonstop, and the Parisians pursed their lips and looked away. (Come to think of it, that’s what they do all the time, but Sam was a little jumpy that day and took it personally.) The vet agreed to spay and neuter them, but refused to declaw them like Sam wanted. Sam was stunned—he’d always had his cats declawed, but it turns out it’s illegal in France. (MiuMiu and Coco were relieved.) The vet also insisted that the cats use only a particular blue litter and only eat sophisticated food which comes from a specialty pet store that is only open every other Thursday from 10 a.m. till noon, except in August when they are closed completely. (Maybe the hours are actually longer, but that’s what it seems like.) None of that supermarket swill for these cats! Sam dutifully hauls the litter and food home. (Don’t tell him, but when he’s out of town and we run out, I use supermarket litter and cans because the specialty store is never open when I need it.)

At their second checkup, the vet wanted to draw the cats’ blood. (The conversation happened in French, so Sam wasn’t sure why they needed blood from healthy cats.) The cats made it clear that no, they did not want their blood drawn, and the vet replied yes you do and he sedated them and drew their blood. Knocked them out cold. Sam brought them home limp and stupid. We never learned why the vet drew their blood.

Coco continually proves her worth as a family cat with typical cat behavior–she ignores us eighty percent of the time and snuggles and purrs the other twenty percent. She uses the litter box and only occasionally tips over a plant or a lamp. MiuMiu, being high-strung and unreliable, would be a fully outdoor cat if we were still in California.

Do you find vet care in France different from what you’re used to?

Next time, we’ll talk about how to make sure your cats thrive while you’re away from them with cat sitting in Paris

Written by Yvonne Shao for HiP Paris. Looking for a fabulous vacation rental in Paris, London, Provence, Tuscany, Umbria or Liguria? Check out Haven In. Mention the code: HiPParis19 for special deals and a bottle of champagne with every booking for all HiP Paris readers!

Moving to Paris: Diary of a Would-Be Parisian
The Sweepstakes is Ending: Win a Week in Paris
From Paris to Maine: Talking to HiP Paris & Veggies to Table Founder Erica Berman
French Fall Wine Festivals and Events

FYI, I didn’t want to comment on the declawing comment (I don’t like to get mixed up in political arguments), but I feel the same…it’s inhumane and I would never do it to my animals. While it’s still legal in the U.S. in general, thankfully my city, West Hollywood, has outlawed it. Hopefully, other cities in the U.S. will follow suit.

Yeah it is awful and, Although my beloved kitties aredestroying my home, I would never do it, legal or illegal. I once knew a cat that was declawed and she suffered terribly. -Erica

Hi, Asli, I totally agree with you! It’s monstrous, and I’m glad it’s illegal here. This incident prompted me to do some research, and I learned that although it’s legal in the US, it’s illegal in many other countries. I hope the US follows.

Thanks for reading,
Yvonne

I loved reading about your adventures so much up until you mentioned declawing. I am so relieved it was banned in France. Declawing is monstrous, it’s a horrible cruelty. I’m glad cats were saved from being crippled.

Wow, I did not realize the French ‘recognized’ Maine Coons. Interesting. I had one for many years, in the US, before moving to France! They are amazing kitties indeed. Aww you need to come back to Paris soon! A bientot – Erica

Hello Yvonne. I lived in Paris 2010-2012 and brought my two cats with me from Los Angeles. I found your articles to be quite amusing, and brought me back to my time there with Tyrone-Michel and Lenny. I gave Tyrone a hyphenated French name after I learned that he was a common domestic feline according to the French vet, but Lenny’s breed was actually recognized by the French (he was a Maine Coon). They are both gone now, but I’m enjoying following your adventures with your cats (and missing Paris, bien sur).