Decoding The French Menu: The Truth About Steak à Cheval 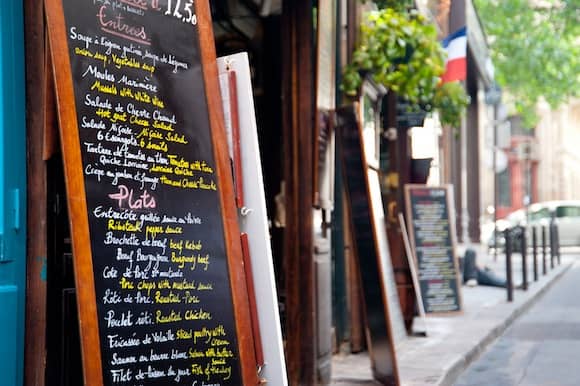 A Paris chalkboard menu – appearances can be deceiving! (Daxis)

Years into my love affair with Paris, I’m still making ridiculous rookie mistakes. I suppose it’s time to accept that France will always have the upper hand, but it still stings.

My most recent humiliation is horse-related. Or at least, I thought it was.

Please note that I was a horse-obsessed child, so equine-related topics are particularly touchy for me. As a child, I would sometimes dress in riding garb for no reason at all. And while I was waiting for my parents to break down and buy me a real horse (never happened), I would drag garbage cans into the backyard and ride them, periodically switching from one member of the “herd” to the next. On any given afternoon, people in the house could gaze out and see me whipping a particularly stubborn garbage can with my riding crop. 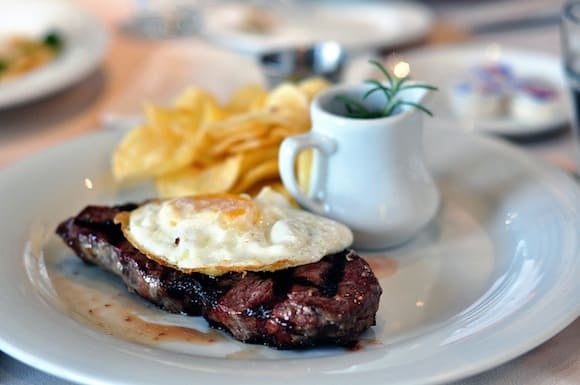 So when I first moved to Paris and started noticing “steak à cheval” on menus around town, I was wary. I knew there was a historical precedent of eating horse meat in France, but it seemed quite inhumane in this day and age. Nonetheless,  I assumed it was some kind of trendy gastronomic revival, and who was I to question the local gourmands? So I kept my mouth shut and simply avoided the dreaded horse steak when confronted with it.

Recently, I was visiting my boyfriend’s family in Brazil. One night, we sat down to dinner and I was presented with a traditional dish called bife a cavalo (in Portuguese), which translates to “horse-riding steak” or “steak à la horse.”

“No, it’s like steak à cheval in France,” G explained.

It was at this point that I realized I’d been operating under a serious misapprehension, and it took the collision of three cultures for the truth to surface. 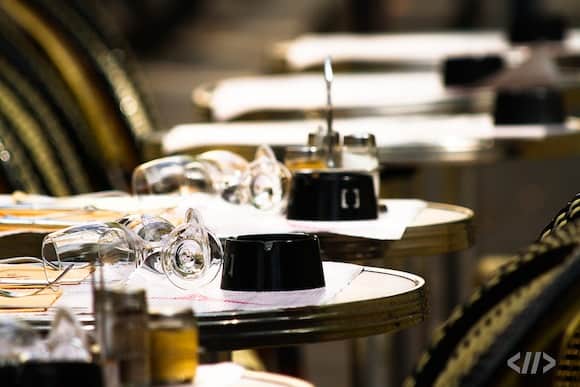 No wonder the French had seemed so lax about all that presumed “horse-eating”—they weren’t eating horse at all. It turns out that steak à cheval (or bife a cavalo) is merely a cut of beef with a fried egg on top. It turns out the French aren’t as barbaric as I thought! And it turns out I’m kind of an idiot.

I shudder to think what other misconceptions I’ve been carrying around all this time, but I have a feeling the truth will win out. Paris will see to that.

25 comments on “Decoding The French Menu: The Truth About Steak à Cheval”

Very late in the day to be replying, but the old cheval chestnut came up in a recent translation I was working on, and I thought I would share some French trivia. It’s all in the language darling…”Steak a cheval”, your famed dish with egg in pride of place; “Steak DE cheval” 100% equine delight, and despite this turning British gastro juices rather sour, the French appear to have quite a taste for our four-legged friends. And the Italians too.
But all is not lost…two French chefs have recently set a gastro hurdle for London restaurant-goers by putting cheval on the menu, seemingly to much acclaim. So you see, when forced, us Brits literally can eat a horse…

Please still be very leery of any form of the word “Cheval” on the menu. Most of the horse meat that is avail in Europe comes from the U.S. They are usually ex-race horses and animals that have come out of the hideous U.S. slaughter pipeline. These animals have been given medicines intended for pets and are very caustic for humans to eat. If consumed by children they cause blood cancer and marrow cancer in adults. These medications are strictly banned in the U.S. and cannot be used in food animals. The horses on the menu in Europe have a 70% chance that they came from the U.S.

I went to France a couple of weeks ago and asked the waiter to surprise me. He brought a nice looking steak and I dug in. I got the bill and it said Steak a cheval. For the first time in my life I saw my skin turn green. Thank god I found this site to rid me of my delusion 🙂

But they do eat horse: chevaline, it’s called.

Love this! I am still laughing… I have been avoiding ‘the horse’ for years too!!!

Hi – that was a very funny post. I always wondered abou that myself – and when in France…I avoided it as well.

I too was a horse lover as a child. I didn’t do the garbage can thing – but had I thought about it, I would have. I just used a tree branch (carved a bit of course) to spur on my horse (which was me – and I’d hit myself on my leg to go faster).

Parents never bought me a horse – but I did go riding quite a bit. They bought me riding boots etc – and a book about becoming an equestrian. Wow!! I wanted a horse so badly!!

Hi all! Thanks for your comments and glad you like the post. Quite right — there’s nothing inherently “normal” about eating a cow rather than a horse. I guess it’s a question of how we’re conditioned. Maybe it’s time I reassessed the whole issue! I definitely eat a lot less meat when I’m in the U.S. In France, I tend to go with the flow. What about you? Tory

But they do have special butcher shops for horse meat called Chevaline. Often inconspicuous looking places not as fanciful as the regular boucheries. Somewhere to shop on the downlow?

I don’t know what I like better – the writing or the wit?! Awesome piece and mystery solved (pour moi)! 😀

It’s good that you can poke fun at yourself. Different cultures have different ideas about what to eat. I’ve learned not to be judgmental about individuals or countries eating preferences. I grew up in the south and a lot of people turn up their noses a bit at our “cuisine”. It’s all in what you are used to eating. It’s like the old Zen saying, “There is nothing right or wrong, but thinking makes it so.”

Cute story but the French do butcher horse. As identified by the horse head out front of the butcher shop 🙁

In my young and carefree days traveling the grand tour, I enjoyed a wonderful butterfly filet of horse and found it to be sweet and delicious. As a carnivore I have eaten many a creature that I knew and raised myself, one gives thanks to the gift of the life taken.

Love it. So glad to see a Tory post on HiP Paris!! More to come I hope.

It’s a fun story…and I am sure I’ve been guilty of many cultural misconceptions of my own! Still, I am not sure why eating horse is “barbaric” while eating cow is fine? Cultural biases aside, it’s the same thing, isn’t it? As a meat-eater, I ask this in all sincerity, not as a judgement.

Haha!!! This is awesome! I would’ve thought the same thing 🙂 Thank you for clearing this up for people like me. Someday, when I go to Paris, I will not have any reservations about ordering the horsey steak 🙂

But……whereas “steak à cheval” isn’t really horse, the French DO eat horse meat to this day. You can find several ‘boucherie chevaline’ in various locations around Paris (they normally have a sculpted horse’s head, or several above the door). And it’s not really that rare or exotic, check out the viande section at any monoprix or carrefour – a popular brand comes on a red-gingham colored tray, vacuum-sealed. Probably more information than you want, but it’s a very lean meat, quite tender, and slightly sweeter than beef…

I don’t quite understand why one would have an aversion to eating one animal and not another…what is really the difference here between a horse and cow? Is your affection for horses really a solid and logical reason to eat the flesh of a cow when you won’t eat the flesh of a horse? They both have the same capacity for pain and suffering…one is not somehow less of a living animal than the other…makes no real sense to me.

I do hate to disappoint you, but although “steak à cheval” does not mean horse steak, the French still eat horse meat. You can still horse butchers (boucherie chevaline) scattered around Paris, on markets and in the provinces. Horse meat (I’m not saying I condone or agree with this – I personally don’t buy it) is considered the most healthy of all red meat. The one and only time I ate it, I was told it was beef and was not happy when I discovered I had been duped!

Common error, I think we’ve all made it! Cute story =)

Love this! I am still laughing… I have been avoiding ‘the horse’ for years too!!!