The Expat Mom Experience: To Paris and Back with Bébé 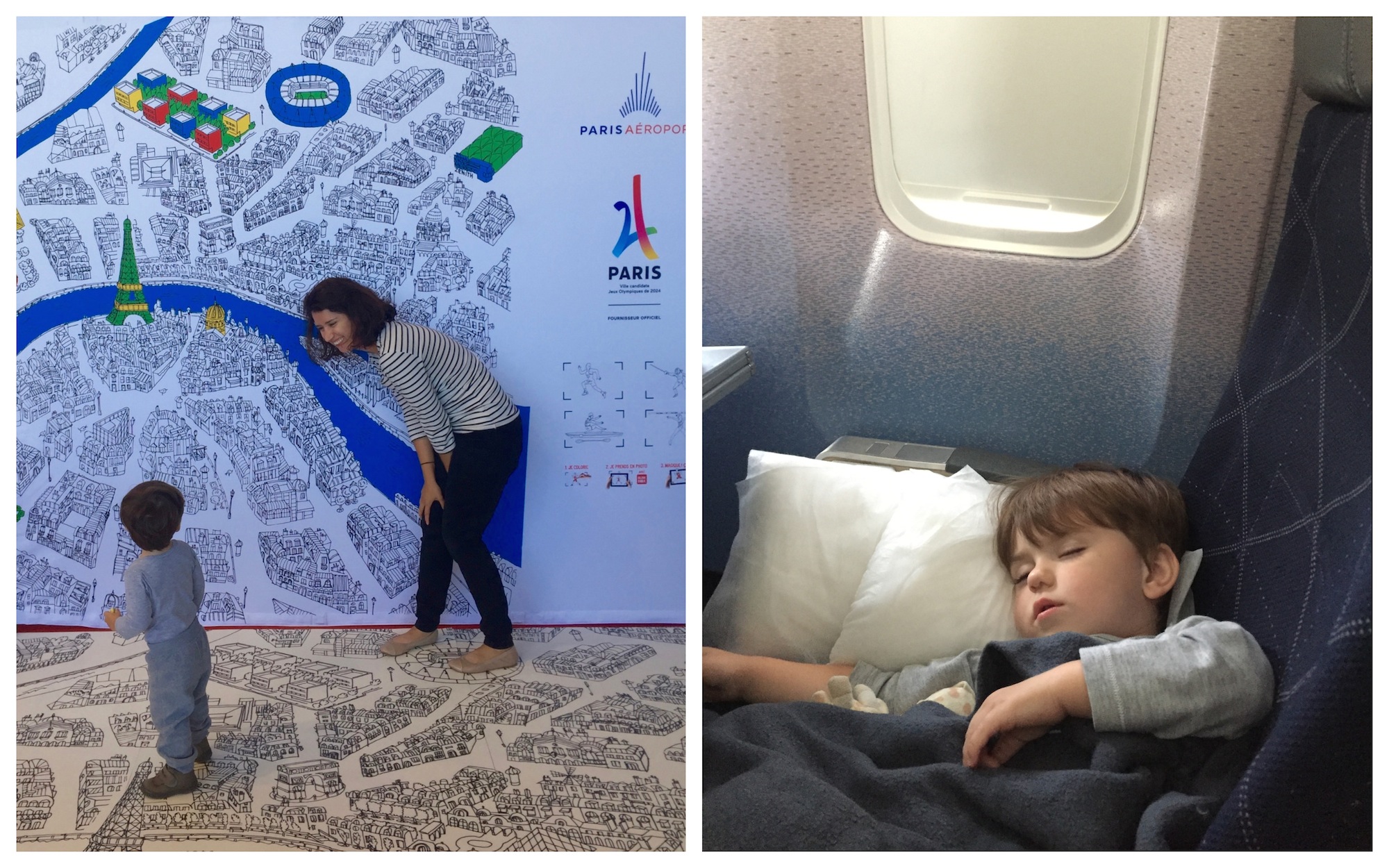 My family and I got back from our annual summer visit to New York. And if that wasn’t action-packed enough, we threw in an oh-so-out-of-the-way trip to Los Angeles. And as the cliché goes, we need a vacation from our vacation. Sure, it was a good time with memories to go around, but between the jet lag and the door-to-door travel time, which clocks in at about twelve hours, we’re wiped out. Raising a child, whose American roots are just as important as his French ones, pushes us to visit more often than we did when it was just the two of us. It just takes the wind out of us more now than it did then. Quelle surprise?

In our son Georges’ almost two-year life, he has crossed the Atlantic twelve times. And you would think after ten times, mom would have the system down like a pro. But no. Each time, I’m that mom. I’m the mom that scares girls in their early 20s, making me an involuntary PSA for birth control. Why? Because I make it look hard. Dressed in leggings encrusted with applesauce stains, stressed out hair that needs something —a relaxer, maybe? Do they still do that? — And frenzied attempts to keep my son off the moving walkway and to not touch the other passengers, I am not exactly the portrait of motherhood made easy. 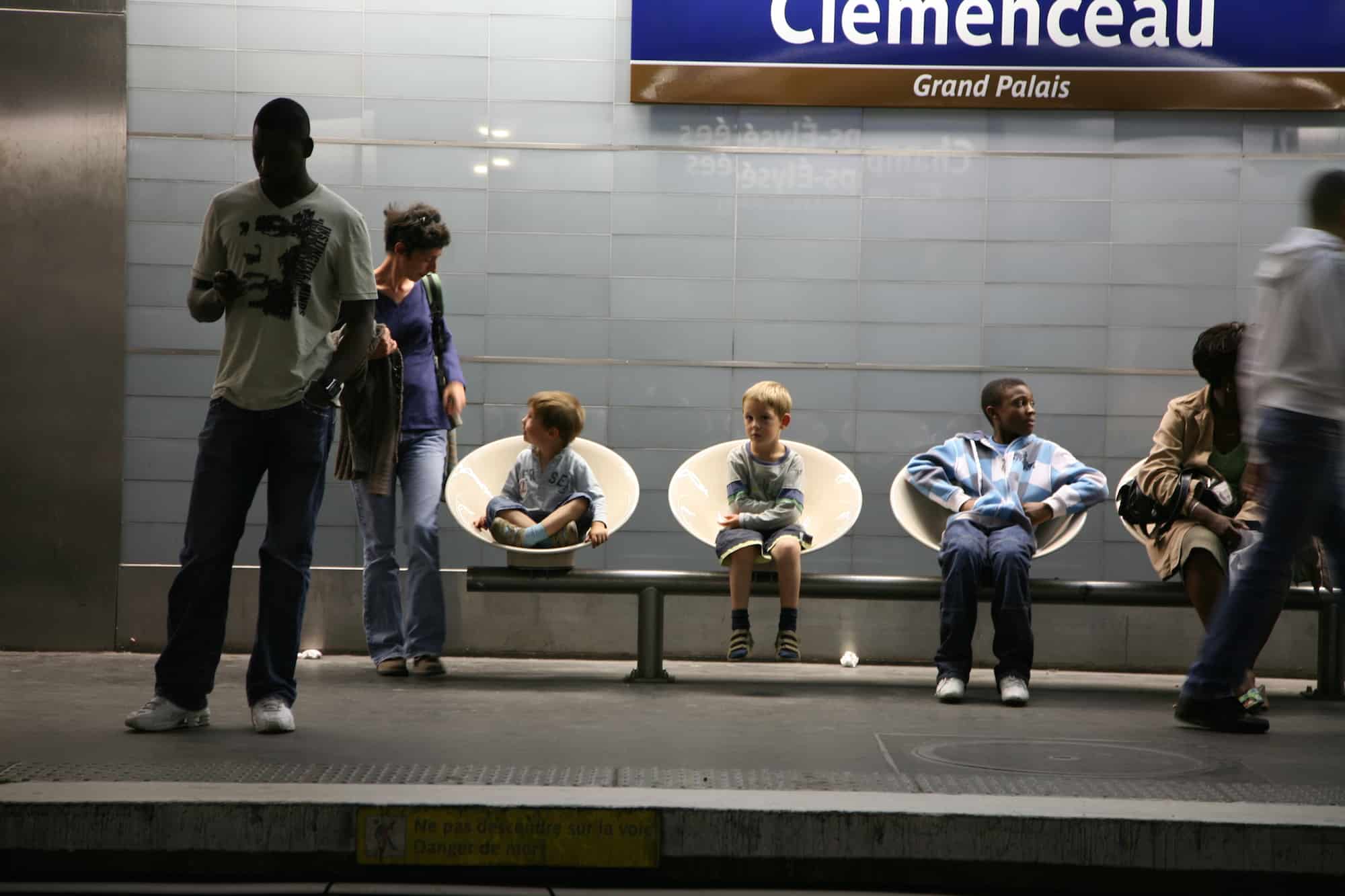 Easing into the process of travel with a baby, I started small with the Paris transportation system. Shortly after giving birth, I built up the courage to venture out, just the two of us. Taking along everything he owned, I arrived at the aboveground Bel-Air station and was confronted with some bad news. Stairs. In my burst of ambition, I had forgotten about them, which was quite amazing since they were the bane of my pregnancy. Because my muscle mass at the time was the equivalent of string cheese wilting all morning in a lunch bag, carrying up to 50 pounds of equipment plus baby up a steep flight of stairs was as probable as a postnatal aerobics. Naturally, I assumed, there was an elevator stashed somewhere—something I had never looked for during my pregnancy because I was trying to stay fit (notice the italics). Relying on my American logic, I decided there just had to be an elevator because it’s the law, right? Never assume in Paris. Never. Upon investigation, which involved smaller sets of stairs and talking to the RATP agent who sympathized with my plight, I learned there was no elevator and that I would need a Plan B. Enter the bus.

The bus took some getting used to. Used to the rapid pace of the metro, I had become accustomed to leaving the house with minutes to spare. Getting by on the bus, however, didn’t offer such luxury and meant working on an unpredictable schedule where traffic, construction detours and protests had to be accounted for. 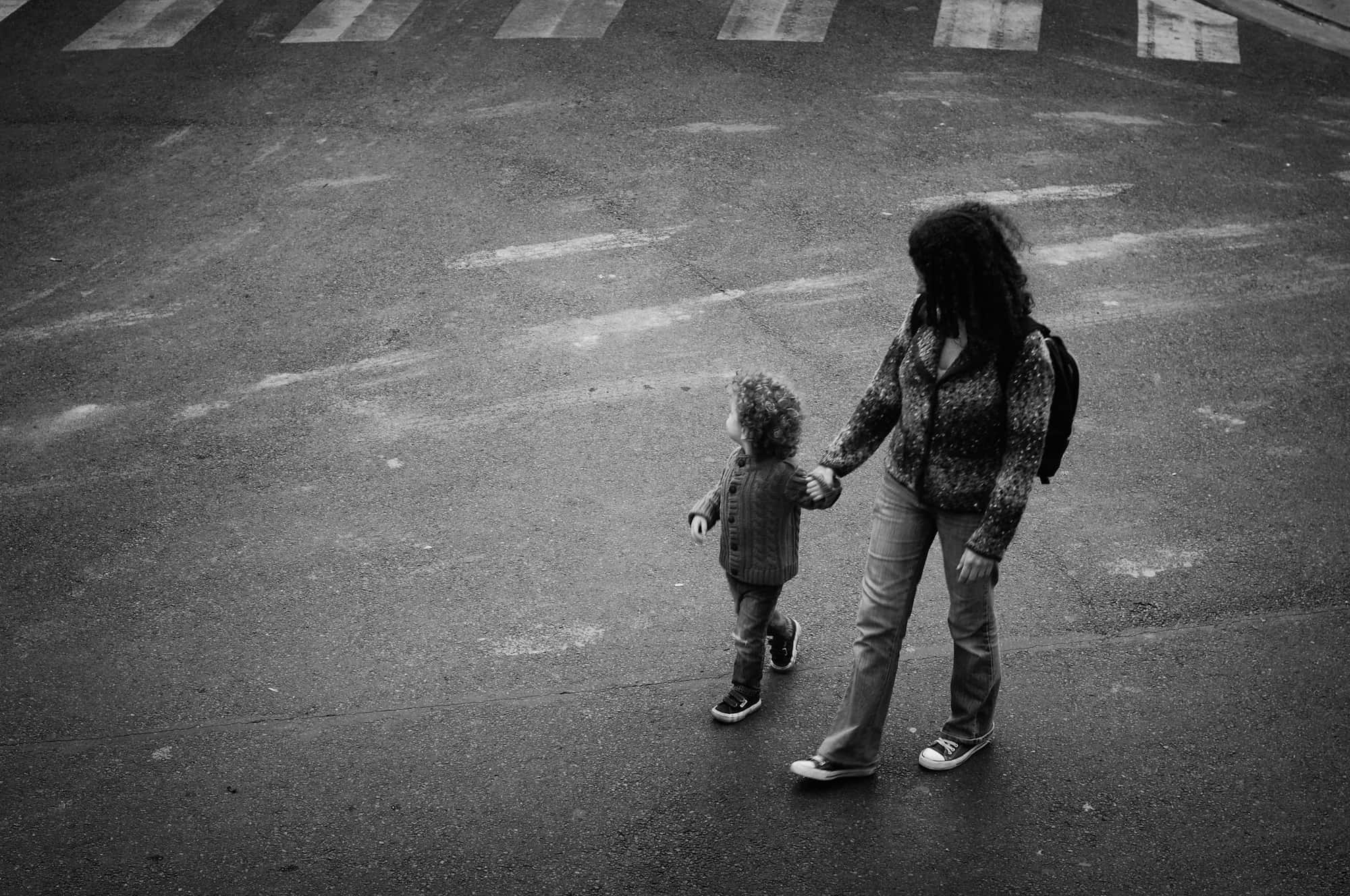 During the weekday when the passengers operate on a more leisure schedule, I would routinely sit next to someone who had time to disapprove of something I was doing. The presence of a baby seemed to provoke colorful commentary like accusing the baby’s coat of not being warm enough; asking if I was sure the baby carrier was secure enough or my favorite: we should be at home. While well intentioned, I offered little in response because I am not witty in French, but also, these precious first moments with my newborn were for us to share. Only a few weeks old, Georges was getting a rolling tour of Paris. The vast windows of the bus produced postcard views of the city, as we circled around Place de la Bastille, carted down the wide Hausmannian boulevards, and passing 12th-century churches and monuments that mark European history. And Georges, clearly overwhelmed by the beauty of it all, would fall asleep.

The next challenge was our first planned trip overseas, two months later. When purchasing the tickets, we thought we were being clever devils by flying out on Christmas morning. The logic was with France being six hours ahead we would leave on the first flight out, getting us to New York hours before Christmas dinner. It would have been a streamlined plan if we hadn’t received a text message from the airline at 4 pm on Christmas Eve informing us that our flight had been canceled, and the soonest they could get us out was in a few days. Suddenly we didn’t feel so clever. 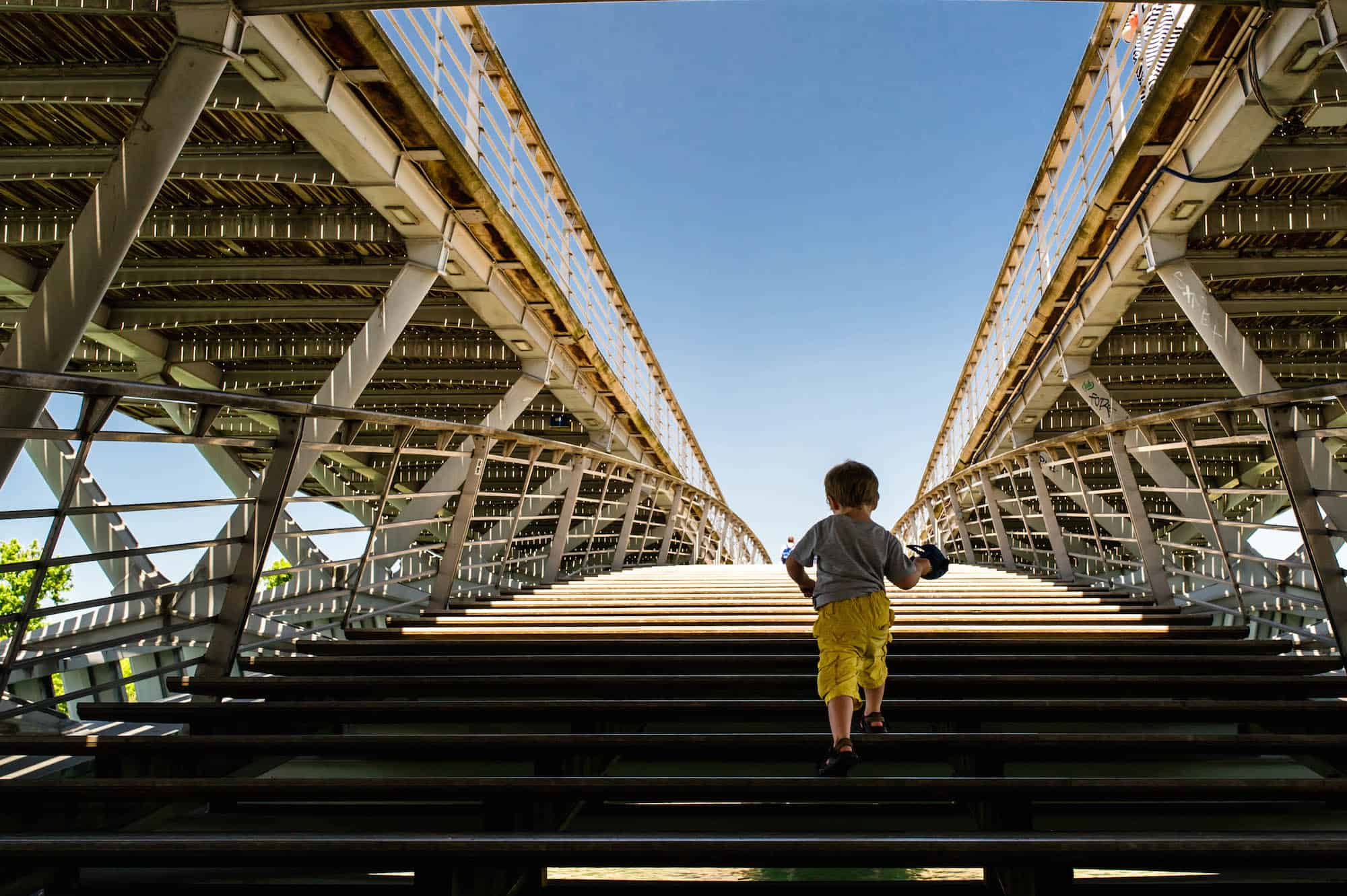 “Mais, c’est pas possible!” My husband Aurélien said on the phone in fierce opposition to the cancelation. He was right. It’s wasn’t possible, but what could we do? A canceled flight is a canceled flight. Even on Christmas. After several more rounds of my husband deciding that it was not possible, the agent asked, “Well, how quick can you get the airport?”

On the last flight holding the last available seats traveling to JFK, we were told that if we got to the airport in an hour, they could accommodate us. Half-packed and completely panicked, we stuffed whatever we could find into bags, banging our ankles with the car seat and knocking into each other like bumper cars. When the cab arrived, we explained the pressing matter and like in the movies he told us to buckle up because he was getting us to New York that night. Oh mon dieu. I made the sign of the cross, tightened Georges’ seatbelt and held on. With Christmas Eve traffic congesting every autoroute from Nantes to Nice, the cab weaved in and out of lanes, took side roads through smaller towns and drove well above the speed limit. As this was all happening, Georges, —surprise, surprise—slept. 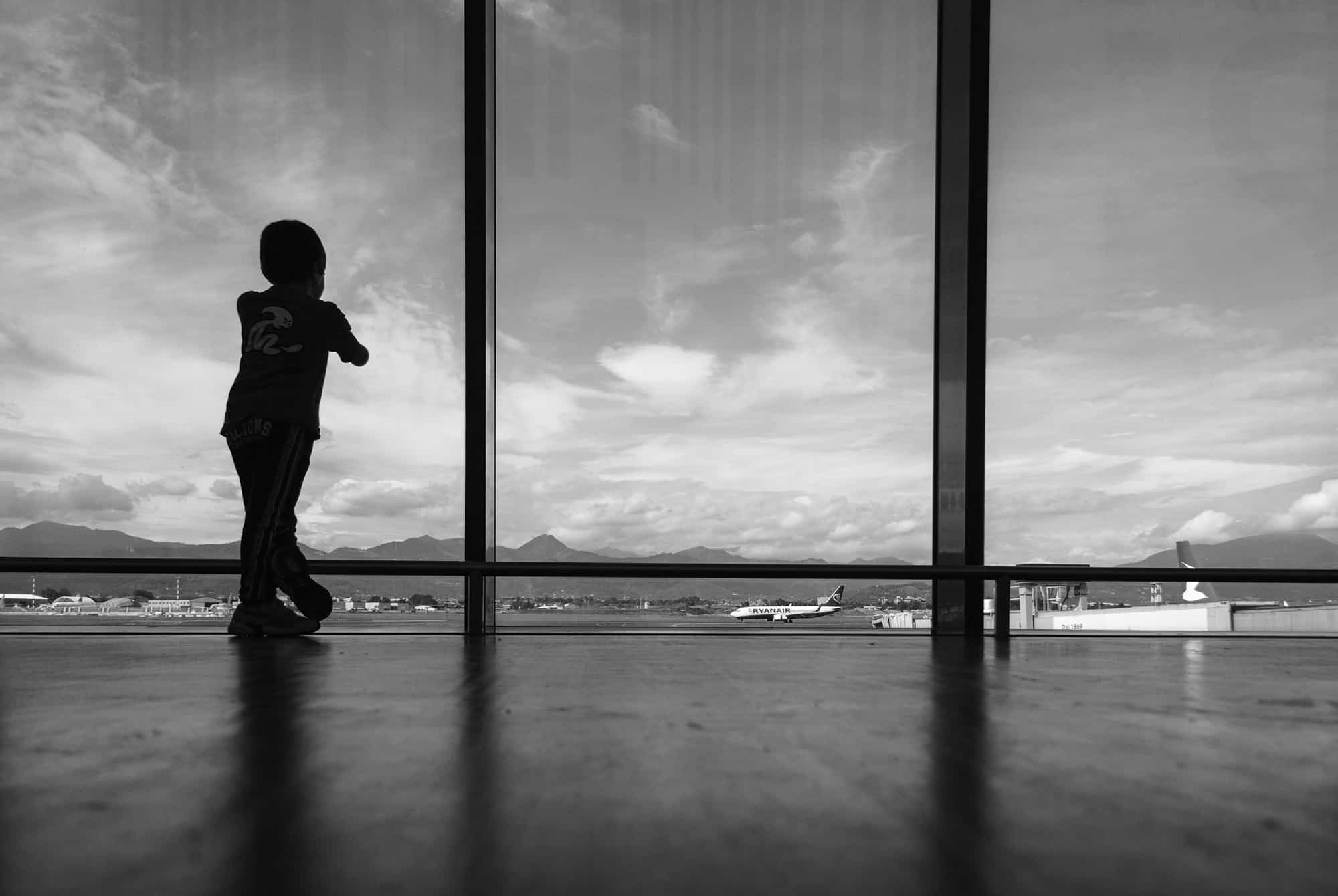 We arrived at the terminal with just minutes to spare. As a pardon from the airline, we were upgraded to First Class. At that point, the last row in coach would have sufficed, but we were more than willing to accept their generous offer. Sitting up front, we wiped our hands clean with the warm lemon-infused towels and lit up over the tray of Champagne flutes coming our way, while Georges slept. This baby had no time for luxury when there was sleeping to be done. Just then, our merriment was slashed when a passenger asked with a long face if the baby was going to cry during the flight. I told her that I didn’t know because, well, I didn’t. She then explained that she has “been there, done that” with kids and didn’t want to be disturbed by Georges. In an ironic twist, the woman ended up being the loud one, leaning over her seat with her wine to talk to the gentleman passenger behind her, as Georges, —do I even have to say it? — slept.

Since then Charles de Gaulle Airport has become almost a second home to my son, who looks out onto the tarmac in delight at the Air France aircrafts regally lined up. He knows to smile politely to the Customs Agents and to not scream in unbridled hysteria when he sees his diaper bag slide through the security scan. He now understands that we will get the bag back. Each trip presents something new I didn’t think of, another passenger mouthing the “F” word when he sees a baby is sitting behind him (thanks a lot, seat 27F) and maybe on our fifteenth trip, I’ll get it all right. Until then, I’ll continue being that mom who looks like she has no idea what she is doing and a son who will be a seasoned traveler before long, as our Franco-American family saga continues. 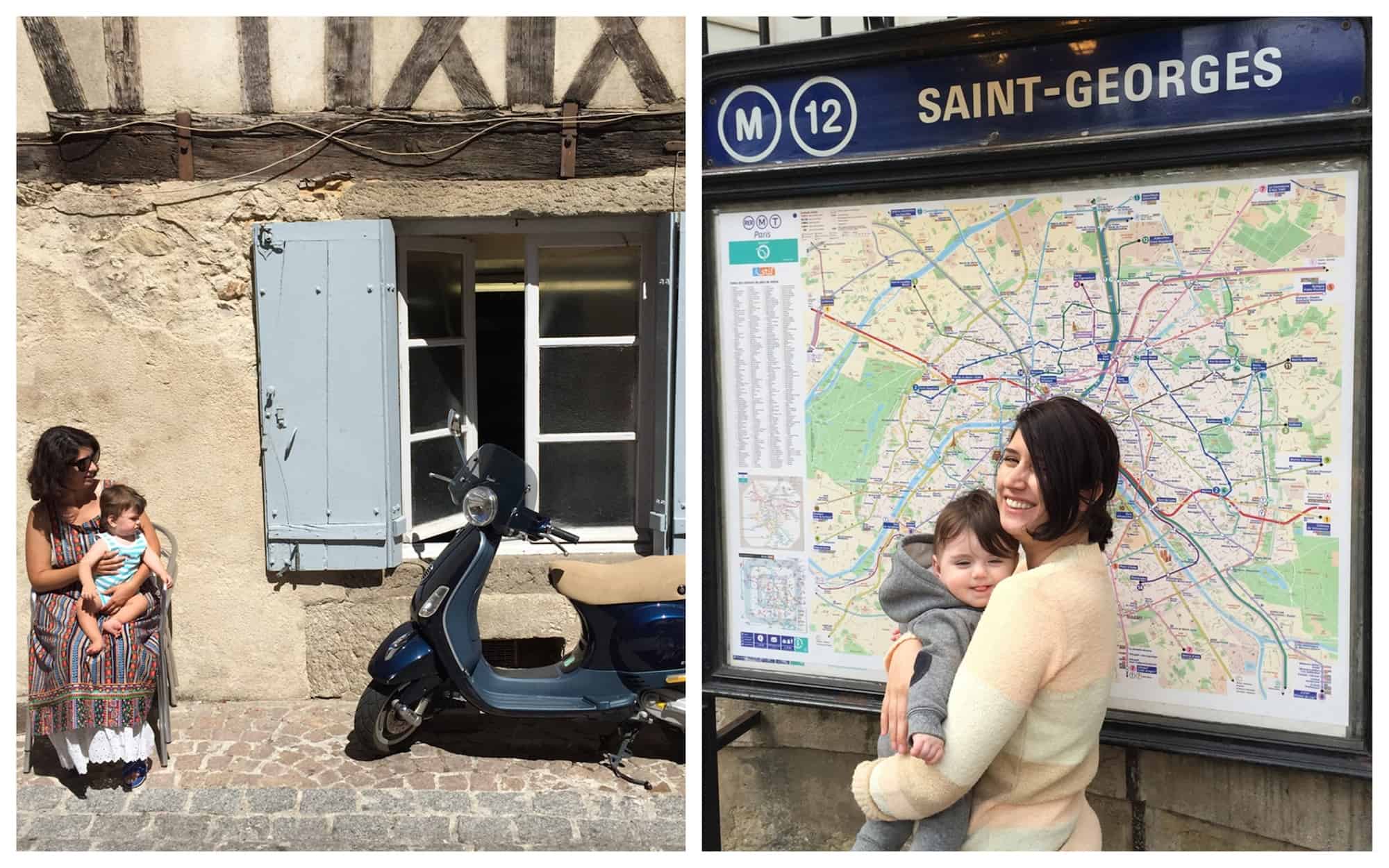 5 comments on “The Expat Mom Experience: To Paris and Back with Bébé”

This looks like a very fun Paris trip. I would love to go visit it too. By the way, your kid is just so adorable.

What an amazing journey! I have a friend who just had her first baby and she’s gonna love reading this. Thank you for writing about it!

As a person for whom babies are still a long way off I generally shut down the baby articles pretty quickly. However I found myself reading through this whole piece with interest ☺️ Getting MYSELF sorted out for long-haul flights is difficult enough?? I’m gonna look at travelling Mums with a whole new level of respect now ?? Sadly, the link to Lisa’s website doesn’t seem to be working ?

I loved this, Lisa! As a French mother of 2 Paris-born little boys, it’s so interesting to read your perspective. I love taking the bus with my kids, and we actually brought home baby #2 from the maternité on the bus. 🙂

I was traveling with babies .. way before people thought babies should even fly .. annoying people. I was lucky, mine slept the minute we sat down.
I have a grandbaby now. He has just taken his first flight … to Japan from the US .. I can’t wait to hear how that went, he hated a 2 hour car drive ! 🙂