It’s True Because the French Say So: Rules To Live By

French people are born with an innate sense of how to thrive in their natural habitat. Dressing well, eating well and comporting themselves with general discretion are key elements in this survival strategy. But there is also a set of hard-and-fast rules that underlie the attitudes and behaviors of the population and provide crucial (albeit completely illogical) societal structure. When I was preparing to move to Paris two years ago, a friend warned me about these rules. To the outside observer, they sound like a collection of crazy Old Wives’ Tales, but to the French, they are serious business. If violated, they will probably lead to instant death… or worse. 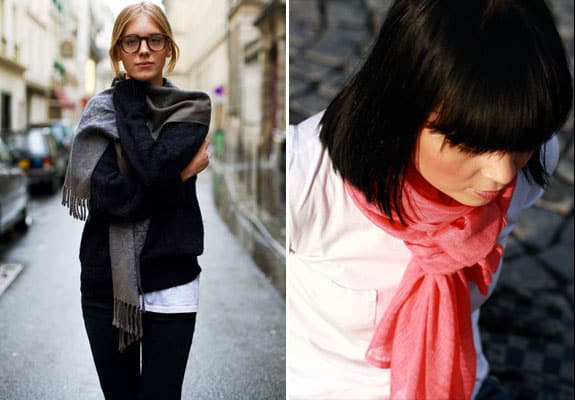 A Cup Of Jo, Egor Gribanov

Note: The rules need not be substantiated by any kind of real factual research or tested logic. We don’t know why they’re true, but we know they are because they always have been. So stop asking questions.

1. Wear a scarf at all times. It’s no wonder that the French have multiple words for different kinds of neck adornments (écharpe, foulard, fichu, châle, etc). If you go outside without one, you will not only violate the rules of French fashion, but you will also risk your life. Your neck is fragile; protect it. Note: scarves cure not just the common cold, but nearly all known ailments.

2. Be suspicious of air-conditioning. It is unnatural and is to be avoided at all costs. Anyone who has suffered through a sweltering August night in a Parisian garret can attest to the fact that the French take this rule seriously. Some hotels provide an exception—tourists can be sacrificed—but your average French family steers clear. Better to overheat than to die of a mysterious AC-related affliction. 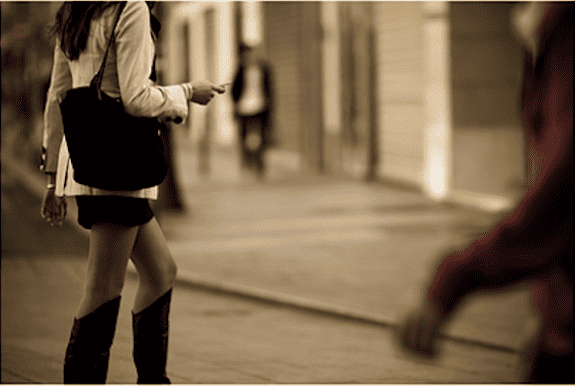 3. Never put food that is still warm in the fridge. You. will. die. It is fine, however, to leave it uncovered on the counter—or, better yet, outside on the windowsill—for days at a time.

4. Exercise is for foreigners and the misguided. If you must do it, be discreet. In fact, you can wear normal street clothes (denim is encouraged) in order to give the impression that you are not actually exercising. Make sure to look disinterested, as if this was not your idea.

5. Lightning will probably break your TV. And there’s nothing you can do about it. If a lightning storm does strike, stand well away from the television, lest it explode and electrify you.

6. Do not eat cooked butter in the morning. Only Americans do that, and that’s why they’re fat. It is fine to slather raw butter all over your tartine, but God forbid you try to cook an egg in a pan with butter—you will die, or at least become instantly obese. After noon, of course, feel free to eat as much rendered fat as you wish. 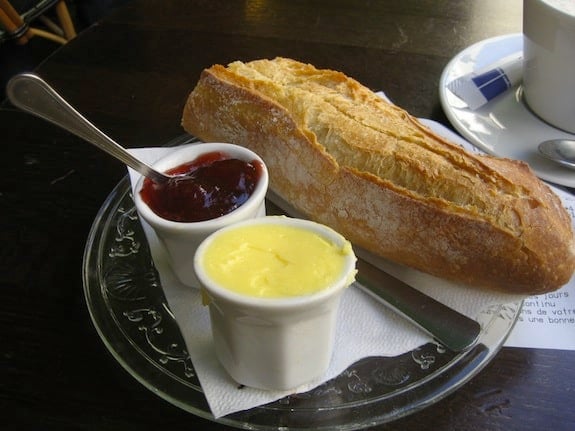 7. Figuring out your unborn child’s gender. If you’re pregnant and want to tell if the baby will be a boy or a girl, do not waste time going to the doctor. Simply string your wedding ring onto a lock of hair and hold it above the pregnant stomach. If it swings in circles, it’s a boy. If it swings like a pendulum, it’s a girl. And if you don’t have a wedding ring, I guess you’ve got other things to worry about. Stop contemplating the gender of your love child and brace yourself for some serious Tsk Tsk-ing from your French grandmother. The good news? Pregnancy—legitimate or otherwise—does not preclude drinking (the moderated, French kind of drinking, bien sûr).

So there you have it. That should be enough wisdom to keep you alive for the time being. And if following these rules doesn’t make you safer, it will (at the very least) make you more French. Bon courage!

Written by Tory Hoen. Looking for a fabulous vacation rental in Paris, Provence, or Tuscany? Check out Haven in Paris.

36 comments on “It’s True Because the French Say So: Rules To Live By”

STILL makes me laugh this article!!!

I always thought #3 was about avoiding vapor in the fridge, leading to the dreaded thick layer of ice in the freeze compartment (some fridges have one inside the fridge, not separated)

BEAUTIFUL photo’s! Great blog! I love french style, I think it’s above all other fashions. If you have a chance, please check out my blogs:

I use the “fleur de sel” excuse all the time! For real — and I come back with a case full–which I know I could buy down the street. It just tastes better when you bring it home yourself!!!
Great blog!

Hi, your pictures are very beautiful. It’s awesome! If you have time, come to see my blog and talk there… Thanks.

This made me laugh out loud! It’s all true!! I live in Bordeaux and I never leave the house without a scarf! I would hate to stand out!

I really enjoy reading this,
I laughed a few times. Just thinking that the french and paris would be a great place to go on a holiday.

being a French grandmother, I would like to know what is :tsk tsk ?
otherwise, you are not far from the truth…welldone !
bravo !

#5.. sooooo true! I grew up being told by my grandparents and parents to stay away from the television every time it rained, which was A LOT!

I laughed and laughed! I have lived in France for various periods of time, and visit several weeks every year. As a grad student in Avignon, I lived with a woman who left the salt cod in the sink for days and days, then cooked bradade de morue with it and served it for days and days. I still can’t eat the stuff! All meats were roasted in the cool of the morning and left on the counter uncovered until dinner. I didn’t die, to my own surprise! When in Rome, oe the hexagon…

Another example of how Buenos Aires is like Paris ( I have been collecting these examples today !)
We never go out without a scarf, warm or cold.
I have a/c in my apartment, I am a heathen from another country, so it is allowed.. which leads to why a scarf is good all year round.
Otherwise, they eat butter and steak here every meal … or so it seems… and they exercise like crazy… and they are all mostly thin.
I am the transplant and I do not eat butter in the am, cooked or otherwise, exercise beyond walking and never eat meat .. and we have a honking big television ..
I guess I am not going to blend in in Paris that much either : )

Parisians do hate the AC and love the scarf! Not a lot of exercise though!! Thanks for all these insights so interesting!

I’ve never been to France, and I guess I can’t go now … I have never mastered (nor even mistressed) the art of wearing a scarf. Thanks for the warning!

You must come Carma … that way you will learn to master! – Erica

Je suis fiere d’etre landaise! I loved these, although I lived in the “wilds” of Landes and Bordeaux, they are all so true! I was aghast, personally, at the multitudes of flies (and the lacadaisical attitude towards them) in food stores, as well as the lack of fly screens in windows and air conditioning.

it’s rare that i read lists like this about the French and laugh because usually all the stuff is so cliched and not really true that I can’t find it funny. But, you’ve hit on a couple that I find so true and bizarre that I’m giggling in my office. the scarf/AC/air current thing kills me. My french friends are certain I am going to fall terribly ill because I sleep with the window open. I was once on the metro and a panhandler woman came on…she started her speech “It’s not easy asking for money on the metro – first of all it’s noisy, second of all there is the “courant d’air”‘…seriously…you’re begging for money on the metro and one of your biggest worries is that it gets a little breezy?

And the food on the counter thing kills me. I’ve become much less American about this after 9 years and will leave a pot of soup covered on the stove over night which totally freaks out my American friends now. but I have been with friends here and been shocked at what they’ll leave out and still eat the next day.

oh i’m still laughing because it’s so true, too, that there is such an acceptance/resignation/absolute belief in some of these things that is summed up by you “nothing you can do about it” phrase. Yep, these are the things they believe. and, nope, they will not listen to anything else to the contrary. Breezy currants might kill you! And there is nothing you can do about it. Except, wear a scarf!

thanks for a good smile today!

Hahahaha! Great list of rules!
I am going to Paris at the end of July and need all the guidance and advice I can get!
Thanks for this!

Never hear about #7, but can attest that #1-6 are absolutely true!
And I must admit that after 7 years in France, leaving the house without a scarf (unless it’s 40 degrees C outside) is like leaving the house naked.

These are so great. I remember when I first moved to France and my French friends were always worrying I would catch a chill cuz my neck was, heaven forbid, scarfless! In the US, who would have thought of wearing a scarf all the time? Now, after so many years in France, I have to admit that I often feel naked if I go out without the scarf.
I do still love to sleep with the window open. The French are most certain this is another way to fall immediately ill as there is a draft. Generations of Americans seems to be surviving, but try to convince a Frenchie of that!

I rolled reading these! I learned them all the hard way with my husband, especially #3! I just read this post to my husband, his response (to #3): you don’t want to shock the food! You love the food, you would not want to treat it that way. You wouldn’t want me to stick you in the fridge, right! So illogical!

Yes, I know. It’s crazy isn’t it? But at the same time so much fun.

I ordered a cafe creme after dinner and friends told me I was going to be sick, another one remarked, “don’t worry about it, Americans don’t have livers, they can eat anything — and they do. . .”

Where else in the world we want to live though, I ask you.

Many of the rules were new for me although I have been living here for nine months. Good to know.

Haha, this is lovely 🙂

Very interesting! Thanks for the heads up! =)

A rare “bite” of French protocol that resonate much like the precocious Mediterraneans. No one can top the French in this department… quite fino!
Love it and written in prose… again!
Outstanding scribe,
Thank you,
Penelope