Dog-Friendly Paris: Doggy Etiquette in the City of Lights 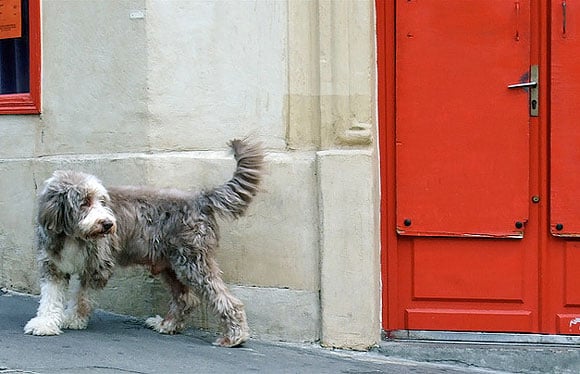 I submitted my graduate school application to study in Paris around the same time as I adopted a dog back home in California. The timing was intentional, of course. I had naive daydreams of sitting outside at a sunny café in a striped shirt and ballet flats, sipping a glass of wine with my dog, Lucas, people-watching with me from the seat next to mine.

Let me just mention that, although it worked out for me in the end, I would not recommend this kind of logic. The hassle of the dog’s paperwork (on top of mine), the stress and cost of his place on my flight and the limitations he imposed on the already difficult apartment search are serious considerations that should not be overlooked if you are considering bring your pup with you to Paris.

That said, I don’t regret it at all. Although I have spent several years in France over the course of my life and considered myself fairly familiar with many French cultural quirks, having my dog here has allowed me to explore a whole new set of myths and clichés. 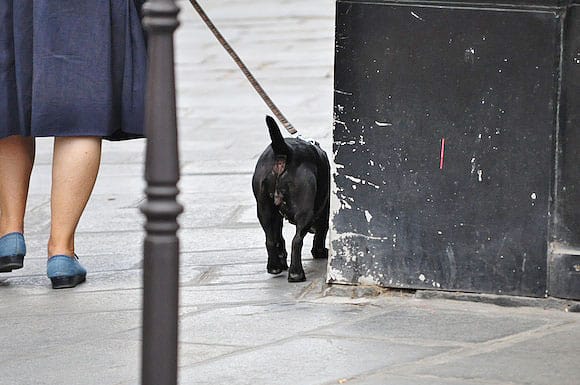 The first question on my mind was where exactly nos amis les chiens are welcome and where they are not. It’s not one I could find a useful answer to before I got here since the most common stereotype people have about the French and their dogs is that they bring them everywhere. Like most stereotypes this is both true and untrue so I’d like to share my experiences…

It took me months to gather the courage to take my dog on the metro. He is considered rather large by Paris standards, too large to fit in the metro’s mandatory 45 cm-long enclosed bag. Until one day I saw a full-size Labrador on my commute to school; my dog has been taking the metro twice a day to work with my boyfriend ever since. It is basically the same deal for the RER and other regional trains, though leashes are allowed and you’re supposed to buy a reduced price ticket for your dog. Buses, however, are the only form of public transit where it seems like people really do follow the official rules – I’ve only seen very little dogs and always in shoulder bags. 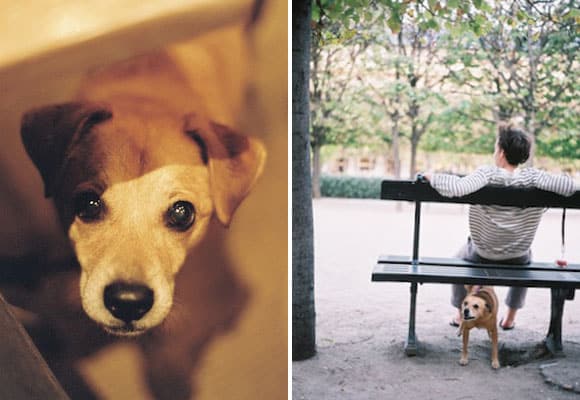 In the states I never dared to ask at a restaurant if I could bring my dog anywhere but an outdoor seating area. In France, I’ve learned to assume we’re both welcome and to walk straight in no questions asked. In a year and a half, I’ve only been stopped a couple of times with a polite “Excusez-moi, Madame…”

The French’s boundless love of dogs stops, understandably in supermarkets, boulangeries, and other food shops. Most provide a metal hook at the entrance for tying up your companion while you shop. In clothing, furniture, department stores etc you can generally get away with a small to medium sized dog as long as he’s well behaved. 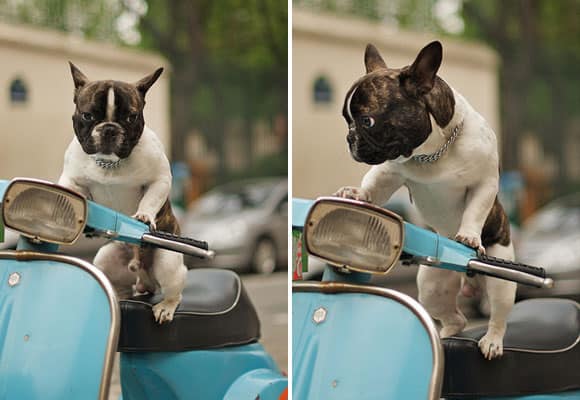 This is probably the most shocking thing, even for those who have spent considerable time in Paris: very few of the many parks that dot the city actually allow dogs. I found the (very short) list of dog-friendly parks on the City of Paris website just before moving here and had a mild panic attack. Only of handful of parks in the center of Paris allow dogs, and many of these are just tiny “squares”.

In general, the no-dogs-in-parks rule is actually pretty well followed by Parisians, so I conform too, even though I have been known to cut across the Place des Vosges in a hurry. 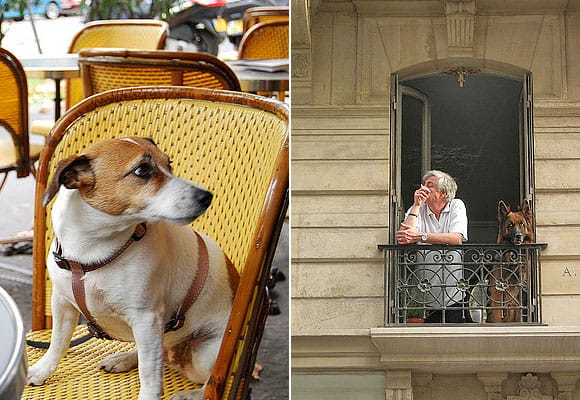 In the parks where dogs are only permitted in a restricted section (the northeast quadrant of the Jardin de Luxembourg for example) security guards are on hand to discourage any excess friskiness. The upside of this is that communities of regulars really do develop at your closest dog-friendly park, and the Bois de Vincennes and Bois de Boulogne turn into leash-free dog playgrounds on the weekends. A sight for sore dog-loving eyes!

So do I bring my dog everywhere with me in Paris? Almost, and definitely more places than back home in California. Although I don’t think I can justify giving my 25lb dog his own seat at a café, he is definitely at my feet whenever the weather is nice enough to sit outside, whether or not I manage a striped shirt. 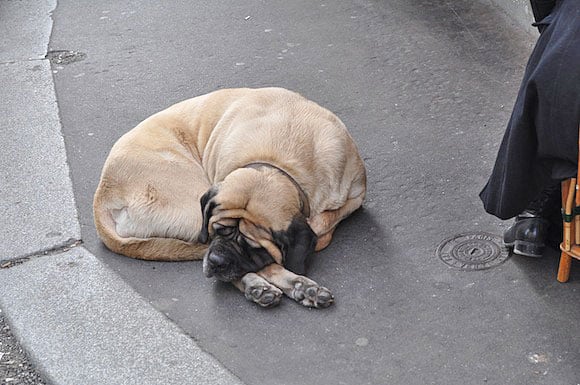 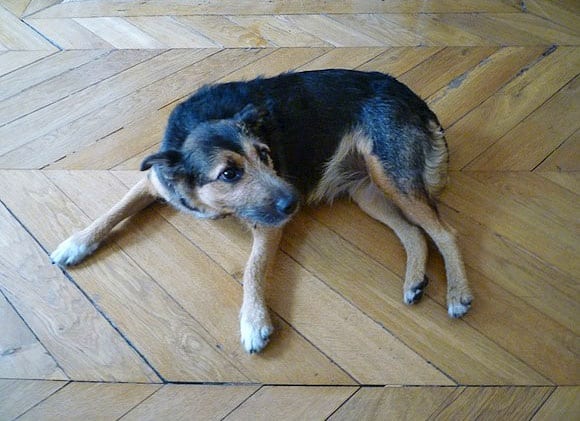 Written by Justine Robinett for the HiP Paris Blog. Looking for a fabulous vacation rental in Paris, Provence, or Tuscany? Check out Haven in Paris.

24 comments on “Dog-Friendly Paris: Doggy Etiquette in the City of Lights”

Great piece of information provided for the pet lovers. I am also a pet lover. I appreciate the way you write your post on dogs.

Thanks so much for sharing this with us!

This is wonderful news for my little dog (shih tzu) and I. We will be moving to Paris here in the coming weeks. I have not however, had much luck in being able to find a pet friendly apartment in my budget (which I have increased several times to accommodate my pup!) Any suggestions??

Do you have any suggestions on where to look for pet friendly long term rentals in Paris? Im having a hard time locating places or websites that include pet friendly as an option. Thanks

I just got a 60 euro ticket two weeks ago for having my mini schnauzer in the Denfert-Rochereau station. Leashed. Was told she must be in a “sac.” I’ve seen s many dogs of all shapes and sizes, muzzled, not muzzled, huge German Shepherd security dogs, etc. on metro. But I got a ticket for my very well-behaved little mini. Phooey.

Both me and Tobbie thank you. Tobbie being our miniture Dachshund will be visiting Paris in September. Although it not my wifes and my first visit by far but it will be our puppies. You have actually settled a few things as being allowed in bars, restaurants and of course my wifes faverite the the shops. Thanks for all the infomation you supplied.

Both me and Tobbie thank you. Tobbie being our miniture Dachshund will be visiting Paris in September. Although it not my wifes and my first visit by far but it will be our puppies. You have actually settled a few things as being allowed in bars, restaurants and of course my wifes faverite the the shops. Thanks for all the infomation you supplied.

Hi Justine,
We have our schnoodle (schnauzer / poodle) LuLu with us for our vacation in Paris. She jumped off the bed last night and seems to have hurt her leg.
We want to have her checked out by a vet, a holistic one if possible.
Can you recommend a good English speaking one ?

Hi, I highly recommend Dr. Calvo on rue de Clichy in the 9th in Paris. I don’t know if he is holistic or if he speaks English but he is a kind and lovely person:

For long-term rentals, I only had experience with looking for a furnished place. This seemed to restrict my options a bit (vs unfurnished) but with the many agencies I consulted it was really on a case-by-case basis what the apartment-owner felt. If I had to guess, I’d say about half the rentals I inquired about didn’t accept pets and half did. There was no agency that stuck out as being more pet-friendly than the others.

Hope that helps and best of luck!

I really enjoyed your post and very helpful too. I am moving to Paris next month for work with my beloved miniture poodle in tow, do you know of any good long term apartment agencies and generally is it difficult to find a landlord who accepts pets?

I like your web site a lot,you did a good job.I am wondering my self,is it good to invest in pet care industry in France.Can you invest in a dog care center or a grooming saloon,or maybe a pet-shop? Are people interested in this kind of service? Thank you in advance(-:

Hi Bianca… unfortunately, we do not have much info on the pet industry in France. Let us know what happens!!

Justine;
what a lovely contribution! I am a dog lover myself and I wait for the day I am slightly more settled down to have another go at it – right now I move around too much and would have no one to look after my ‘baby’ if I am abroad (and I am often).
Love those pixies; those soulful eyes, but I definitely would NOT RECOMMEND to see ANY dog (small or large) on a bistro chair! Travelling in metros with dogs is quite an ordeal too (for the dog!) – it’s most times nearly intolerable for us humans!

Ahh im dying to have a dog in Paris. I steal my sisters all the time and bring him on the metro. I just hate how dirty he gets. I don’t even want him to touch the ground in there. Hahahha.

Bri – I’ve only stayed in apartments with my dog through Parisian Home and Paris-Housing for furnished rentals.

Justine! Thank You so Much for the info! I’m super excited to be bringing my lil buddy even if it is a bit of a pain! Small price to pay! Thank you again for the info. so far she has been chipped with the Euro chip and caught up on her shots, so all is good there! 🙂 If you know of a good furnished apartment long term rental agency, I would love to know! So far I’ve heard Paris Attitudes was good.

Bri – Yay! I’ve flown SFO-CDG several times – definitely take a non-stop! Check online with your airline’s policy, of course. I’ve had great experiences with Air France. Do know that you probably won’t be able to carry-on Layla even though she’s small as it’s an international flight 🙁
In addition to the airline requirements, you should have all the official “immigration” papers for your dog. Here is the official link: http://ambafrance-us.org/spip.php?article783.
As for apartments, most agencies and listing sites will specify whether pets are allowed, but confirm before signing anything. You’ll have less options if you’re looking at furnished places, but there are still plenty available.
It’ll be worth the trouble, I promise!

fabulous post…I love Paris for these reason and so many more!
xoxo
lila

Love this post! Great photos of such cute doggies and very helpful for anyone planning a move or long vacation w-a dog. Wish I were :’)

Hi Justine! I must say your blog is great for a person moving to Paris! Im moving there in September and can hardly wait! I’m also bring my 7lbs dog Layla! An your article could not have come at a better time! If you don’t mind I would love to get more info. on what you had to do to get your dog there? Papers? Airlines? Apartment? Anything is helpful! I;m coming from CA! Sincerely, Bri 🙂