Lily Heise doesn’t date; she stumbles clumsily into romantic mischief. Her latest book, Je T’aime Me Neither, chronicles her sometimes absurdly funny, often racy, always entertaining amorous adventures in Paris. In honor of the book’s release, we’re giving away a copy to one lucky reader today. To mark the occasion, Lily has compiled a list of her favorite romantic activities in Paris — although we’re sure you don’t need too much help finding romance in the City of Love. For your chance to win, see instructions at the bottom of the post. -Geneviève 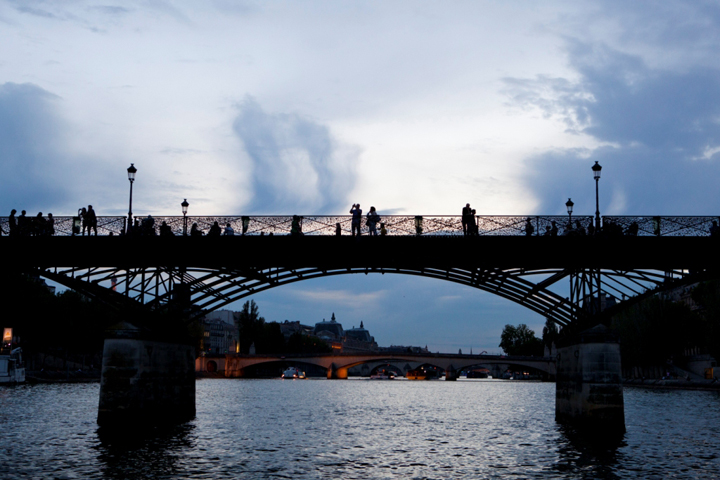 While Paris makes for a wonderful romantic backdrop any time of year, there is something particularly special about the summer months. Perhaps it’s the long days or the short skirts, the champagne or the strawberries — whatever the reason, there is definitely increased romance energy during l’été.

… Something I’ve found out first-hand over the years. Strolling along the Seine into the setting sun is enough to pull heartstrings at any time of the year, but here are my favorite tips for the perfect summer je t’aiming. 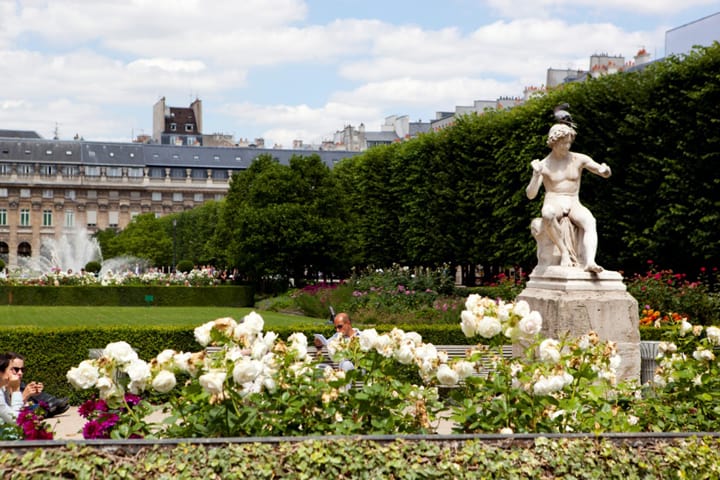 Le Pique-nique – but where?
Picnicking might just be tied with pétanque as the official summer sport of les parisiens, though I think it would definitely win out for the romantics. While there are many excellent places to lay your blanket, the city’s various waterways provide fitting spots for varying degrees of heartbeats.

New amoureux will cherish the semi-privacy found on the pelouse of the Square Vert Galant, located at the western tip of Ile de la Cité, or they can escape the crowds piled on Pont des Arts by heading to the Solferino bridge. Long time lovers might prefer to lounge and people-watch under a shady corner of the Canal Saint Martin. Lonely hearts will enjoy the lively atmosphere of overflowing groups along the Canal de l’Ourcq or just upstream from Notre Dame on the Quai de la Tournelle. 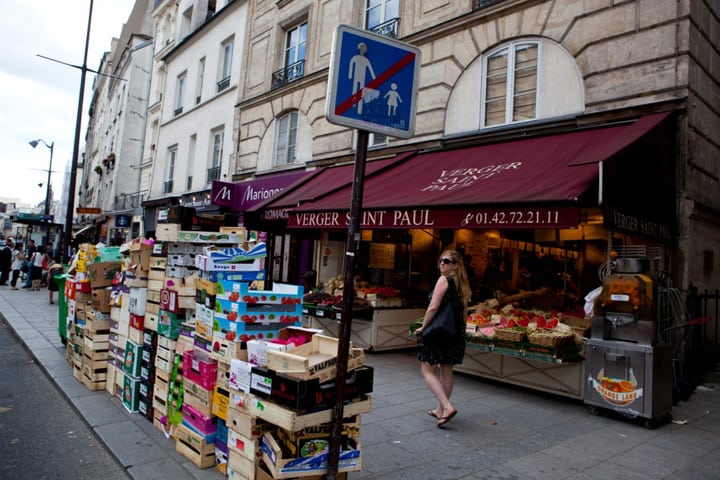 Les Jardins Secrets – shhhh!
Paris is more famous for its large parks, such as the royal Tuileries, the shady Luxembourg or the natural Buttes de Chaumont, which are all absolutely wonderful for lovers. Nevertheless, the city’s many secret gardens offer les amoureux a discreet paradis à deux for a little romantic break in your day. You can stumble upon them in each arrondissement of the city; however, I’ve discovered that the Marais is a treasure trove of little cachettes tucked in between the district’s private mansions and narrow laneways. 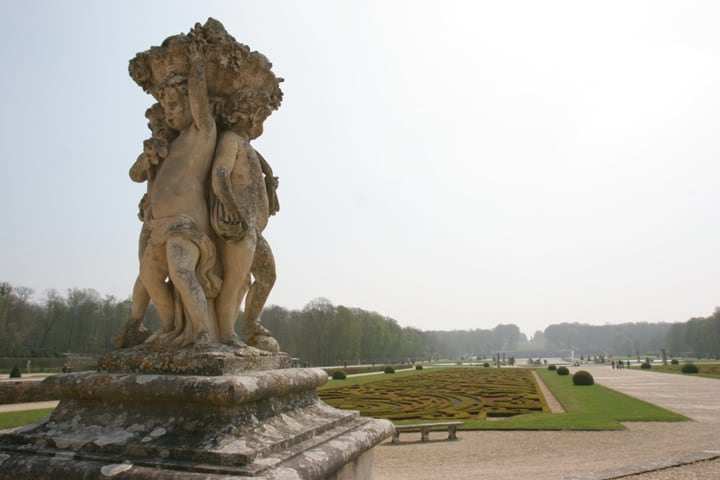 The Jardin Anne Frank, just off the busy rue Beaubourg right behind the Centre Pompidou, is an excellent pit stop for artsy amants. Further into le quartier is the very well hidden Jardin Francs-Bourgeois-Rosiers, accessible through the courtyard of the Maison de l’Europe. Finally, the most secret “public” garden is at the eastern edge of the district: Le Square Saint-Gilles Grand Veneur-Pauline Rolland. With few visitors, it’s a virtually private oasis of romantic bliss, surrounded by colorful climbing roses and a regal private mansion in the background. 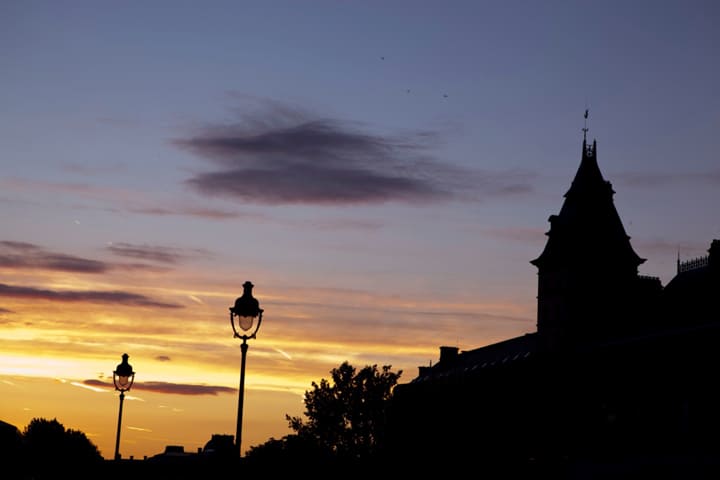 Luscious lunches on semi-private terraces
When not picnicking, Parisians still adore dining outdoors in summer. There are many lovely terraces all over the city, yet some are more adapted for a lovers’ lunch. One of the most romantic lunches I’ve ever had in Paris was at the historic Procope restaurant – its narrow balcony is lined with a row private tables for two, separated by bright romantic-red geraniums, creating an intimate and special atmosphere hard to find elsewhere. For a light lunch or tea, die-hard romantics or mere culture lovers can enjoy the peace of the garden of the Musee de la Vie Romantique, whereas hipster heartthrobs can settle in at one of the more secluded tables on the terrace of the nearby Hotel Amour. 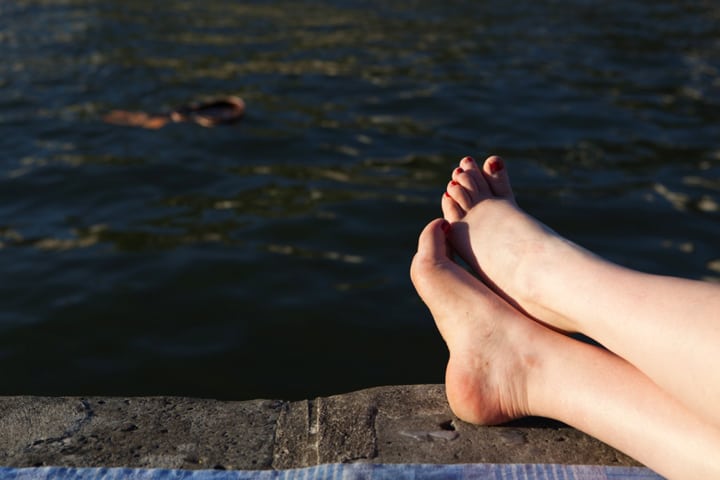 Rêve Romantique day trips
When the city gets too hot even for the most chaud of lovers, it’s time to escape to the countryside. I would have to say that castle visits are probably the most romantic day trips from Paris – Vaux-le-Vicomte and Chantilly being two of the nicest smaller castles in the area (which actually also encompass all of the above suggestions as well!). 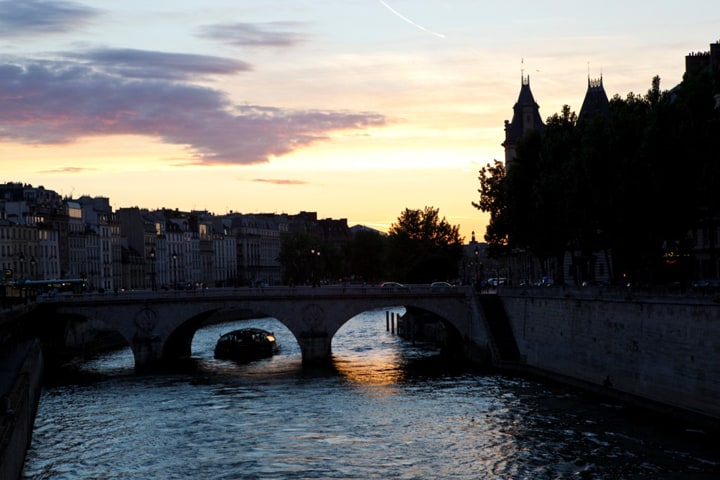 Adventurers or history buffs might prefer to hunt down 1,000 year-old castles in Normandy such as the imposing châteaux of Gisors, Falaise or Gaillard (to which I once had to escape from a serious romantic!). Those wanting to step into the shoes of the impressionists shouldn’t head to Giverny, but rather to where those artists fled to beat the heat: the Ile de la Grande Jatte, Ile des Impressionnistes or to the outdoor restaurant Guignettes along the Marne, near Joinville-le-Pont.

Do you have a favorite spot for romance in Paris? We’d love to hear it! 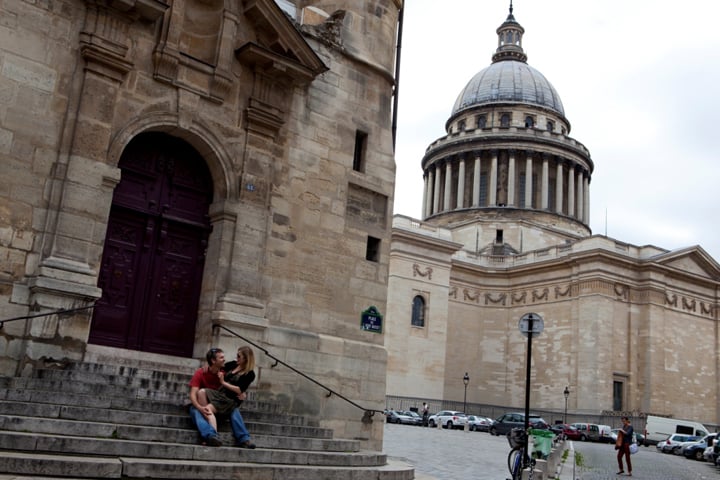 Written by Lily Heise for the HiP Paris Blog. All images by Corianna Heise. Looking for a fabulous vacation rental in Paris, London, Provence, or Tuscany? Check out Haven in Paris.

49 comments on “Paris Summer Romance Giveaway: Je T’Aime, Me Neither by Lily Heise”

Thanks for the article and your blog, a daily inspiration for me! http://www.carnetsduneflaneuse.fr/blogovore/

Sounds like an amazing book. I have stayed in the Hotel Amour and certainly know what a wonderful place that is.

I can’t wait to read Je t’aime Me Neither!…I do think summer is the most beautiful time of year in Paris, the city seems to come alive!…xv

Wow! What absolutely fabuleux posts! And overwhelming enthusiasm for Paris … and for l’amour! I hope you all enjoy the book and that it adds some spice to your vie romantique … wherever you are! Winner of the contest to be announced shortly!

Heading to Paris in August so I could really use this book!

wonderful post! Paris is a wonderful place to visit.

I hope I’m not to late. I just found your blog randomly today & I love it. I hope to go to Paris someday.

Hi I found you through a link of Facebook, I would love to read this book , I am returning to Paris for a few days in two weeks time ,, cannot wait. I love the list you have of places to go ,,

oh I would live in Paris in a heartbeat I love it so much.

What a wonderful post!! And as someone who lives right off Rue St-Gilles, I have to agree, that square is the most romantic, private park in all of Paris!!

I myself have just recently started dating and I have to say… it is WONDERFUL to be in love in the summer. 🙂

What a great book. Looking foreward to visiting.

The book sounds wonderful + would love to read this one. xxpeggybraswelldesign.com

J t’aime, Me Neither sounds like a great book to get lost in, perfect for summer reading!

Paris is just bursting with romantic spots masquerading as normal streets and tiny squares. My personal favorite spot for romance? The gardens at the Musée Rodin. It’s where I got engaged!

Great tips! I’m dreaming of moving to Paris…the book would be lovely inspiration.

Love these suggestions, love Paris, and would love to read this book! Sounds entertaining.

I’ve been living in Paris for almost 3 years, and can’t believe that I’ve only now just stumbled across this blog!

For a romantic summer afternoon, take a stroll on L’île Saint-Louis, and be sure to grab an Amorino gelato for le goûter.

Hotel Amour is on my list for people watching!

What more romantic spot that sitting on the steps of the Sacré-Cœur Basilica at the top of Montmartre viewing the entire Parisian skyline? We visited Paris on a river cruise a couple of summers ago-magnifique!!!

Sounds an amazing summer book!
Exactly what I need to improve my english in my favourite city! Thanks!

What could be more romantic than wondering around the top floor of the Musee d’Orsay and gazing at those beautiful ‘romantic’ impressionist paintings – I certainly found it a magical experience! 😉
Mandy Parrett

I spent a few weeks in Paris last year on a dream holiday of a lifetime……one that we had planned for many years. Your photos were magical and brought back so many memories. I would love to read Lily’s book and be transported once again.

Ohh! What a dream! Can’t wait to make it happen on my trip to Paris in october.

I find a walk along the Seine incredibly romantique-if you find yourself on any bridge a hollywood style kiss is a definite must (ignore the car honking!) xx

Adorable post and suggestions! I’m very curious to read more about the apparent cynicism behind the title of this book, though… heeheehee. Ah, Paris.

Isn’t romance all about the moment? Paris offers an endless supply of over-the-top moments … anticipation is all you really need!

(But love your practical ideas, too!)

love all of the tips – will definitely use them for the next trip. the book sounds great!!

What a great post! I had sort of an a-typical romantic experience in Paris when I lived there, but I’d love to go back with a romantic partner and try some of these suggestions! Who doesn’t love a picnic?

Paris j’taime, last year while in Paris I fell in love with my husband- again! We’ve been married for 24yrs and walking along those bridges at dusk with either the Louvre or Musee Dorsay or even Notre Dame in the distance filled my heart to overflowing. I was so happy when I was in Paris- we’ll be back in September and I can’t wait! xx Corrina Tough

These all sound like lovely activities, with or without a partner!

Such fabulous ideas for a romantic adventure! And can’t wait to read the book also. Paris for love…. Doesn’t get any better.

My most favorite time in Paris was when I was sitting outside any café and just looking, watching and breathing in the city. So alive and unlike anything I ever experienced…. I literally left my heart in Paris.

Oh how I was picnicking in Paris right now instead of in front of the computer 🙂 I would love to win!

Oh my Gosh.. I had the best dating experience ever in PAris.. of course in Paris.. French men are wonderful, the city is a dream for every romantic woman.. and I can’t wait to come back in late summer.. Paris, je t’aime! <3

I would love a copy of this book, Je t’aime, me neither. I’m a Parisphile.

We’ll be in Paris the end of August. You’ve just given us a picnic place “shopping list”. Thank you!!!

The happiest I have ever felt was when I spent time in Paris. That is what Paris can do to you. I would so enjoy reading this book.

This book sounds like a real treat. Whether I win or buy…I can’t wait to read it.
Cheers!

I would love to read this book…if I can’t travel by plane I can travel via reading!!!

How I’d love to be in Paris right now, armed with your book!

I have just left my beloved Paris after a two week stay, and am missing it already. Would love to read Lily’s book!

I saw this on FB and got a little misty that I am here in NYC and not in Paris where the romance is happening.

I need to rectify this soon so that I never miss out on romance season again.

Great suggestions and I would LOVE to read the book!!

I haven’t been back to Paris in a few years and am currently planning a trip next summer! I love these ideas!!!