Smoking in France: Watch Me As I Fauxke This Cigarette

While I can go weeks without encountering a cigarette in the U.S., smoking is still a prevalent part of Parisian life. Though a recent smoking ban has cleared the air in restaurants and cafes, the French still manage to get their daily nicotine fix. How else are they going to stay so thin? Soon after moving to France, I wrote this post about how to be a non-smoker among smokers. Enjoy! 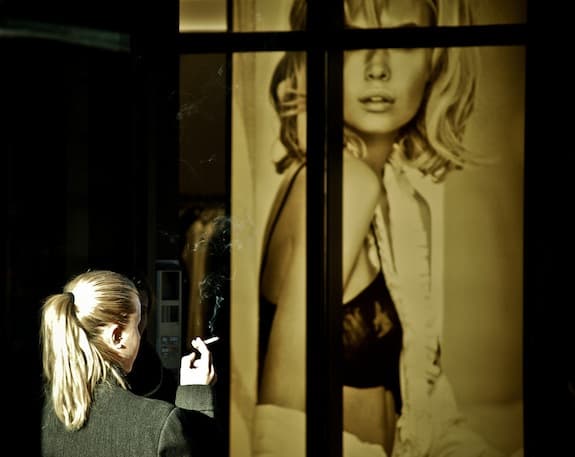 Let’s chat about smoking for a minute. Despite a recently passed no-smoking-in-bars law, tobacco continues to reign supreme in Paris. And while I’ve never really had any interest in being a smoker, it has become exceedingly clear that you won’t get far very in this town unless your lungs are lined with filth.

Listen up, Americans. Despite what your 3rd grade D.A.R.E. counselor may have told you, smoking is cool and, yes, it kind of makes you look like a movie star. I wish I could pull it off, but there’s a problem: smoking literally makes me feel like I’m going to die. Not so much in the moment, but more so the day after when I wake up wondering if I’ve swallowed a cauldron full of battery acid.

And now, while I would like to get really self-righteous about the importance of not smoking, my non-smoker status is less a responsible choice than it is a biological necessity. So my conundrum: what to do during the numerous cigarette breaks that inevitably occur over the course of a bar-hopping evening?

Option 1: I can stay inside the bar and hang out with the loser non-smokers.

Option 2: I can concoct a strategy that will afford me access to international smoking circles without sacrificing the sanctity of my lungs.

Option 2 it is. I’ve come up with a clever little trick: faux smoking… “fauxking” if you will (pronounced foh-king). I know it sounds sexual, but don’t get excited—it’s not.

Fauxking: the art of pretending to smoke (ideally in a highly pretentious, blasé manner) without actually committing the filthy act.

I first began to understand the concept when Bill Clinton famously admitted to fauxking marijuana, and I have since adopted the strategy and tailored it to my own social needs.

Word to the wise: fauxking takes determination, intense focus, and hours of practice. You can’t just go for it without proper training. As you might imagine, getting caught pretending to smoke is a LOT less cool than having refrained from smoking in the first place. 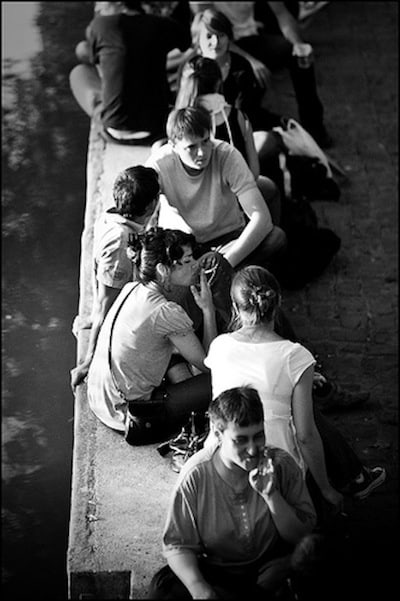 There is a time and a place. Let me explain.

Appropriate use of fauxking: Friday night, I fauxked my way through two cigarettes outside of a bar because I was with a friend who needed a smoking buddy. I was discrete, and therefore successful. The trick is to take a small amount of smoke into the mouth and then CALMLY shoot it out the side in one smooth stream. If you are making a chipmunk face, you are doing it wrong, and you are likely making a true ass of yourself.

Appropriate use of restraint: Later that night, I ended up at Le Baron. Luckily, there were no Olsen twins in sight; otherwise I would have been turned away like the riffraff that I am. But on this night, we triumphed; and then came time for the requisite smoking session outside. I considered fauxking for a brief moment, and then the terror of being caught in the act outside of one of Paris’ ultimate cool-kid establishments made me reconsider. Visions of being confronted—“Qu’est-ce que tu fais avec cette cigarette?”… “What cigarette… oh this cigarette? I’m smoking, see? I’m smoking, I promise.”—saved me from what could have been the ultimate shame: the fauxking call-out. 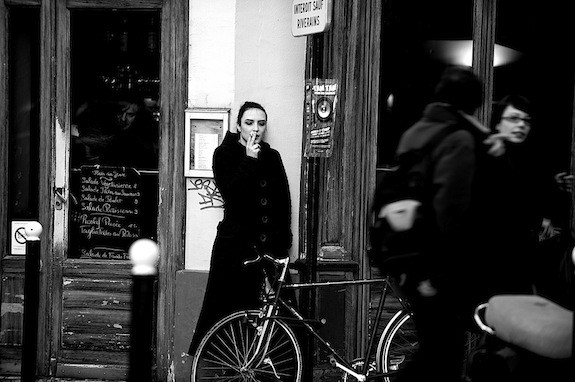 Then again, sometimes when I’m with people who already know how weird I am, I’ll just announce, “I really want a cigarette but I’m going to fake inhale, ok?” If they judge, then maybe these are not worthwhile friends. And if they go with it, I know they’re the real deal. In this sense, the art of fauxking doubles as a social barometer.

Ok… this is spiraling out of control. Just know that if you don’t want to smoke, there’s always the option to fauxke. Or, if you’re normal, I suppose you could do nothing at all.

Written by Tory Hoen for A Moveable Beast. Looking for a fabulous vacation rental in Paris, Provence, or Tuscany? Check out Haven in Paris.

6 comments on “Smoking in France: Watch Me As I Fauxke This Cigarette”

HAHAH your hilarious!! I love the way you write! Can’t wait to continue to follow the site!

i just loved this – laughing so hard, i’m choking on my faux smoke 🙂 will have to blog about this…thanks….got a light?

Talking about you on my blog.
XOXO
Frenchy

I love it – fauxke! Thanks for teaching me something very interesting. I quit smoking in 1991. Would never go back to doing it for real. But for a photo opp, why not? Maybe <a href="http://thesartorialist.blogspot.com"The Satorialist will capture me for one of his posts – he always goes to Paris and photographs people smoking there!

Haha LOVED this post. I was actually planning to write about the French smoking phenomenon in my Paris Blog too! It’s impossible to NOT smoke and I too have started to do it more. But I at least like it… 🙂 How was Le Baron? Still after eight months in this lovely city I have still not managed to go there…