A Day in the Life: Paris vs. New York

I’m recently back in New York from Paris and am suffering a particularly acute bout of withdrawal. I think part of the problem is that the structure of my days changes completely when I cross the ocean. On the European side, time expands and flows and I rarely even know (or care) what day it is. Here, on the rational side of the Atlantic, I’m over-scheduled from morning until night. It goes something like this. 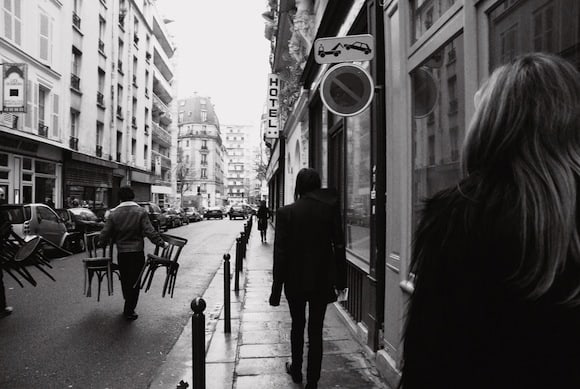 New York Day
• Wake up when my alarm goes off (or when my upstairs neighbor’s alarm goes off—the perils of living in a poorly insulated industrial loft).
• Go running, as need to expend all energy for the day before settling into a chair for the next ten hours.
• Eat cereal. Healthy, practical cereal.
• If have time, stop for an espresso at Euro-favorite Cafe Gitane. Pretend to be Parisian. It’s not the same.
• Brave the Canal Street crush, which involves dodging aggressive pashmina vendors and dozens of dawdling tourists.
• During overcrowded subway ride, contemplate moving back to Paris for the thousandth time. Listen to Serge Gainsbourg to twist the knife in my heart even more.
• Get to work. In essence, I like my job, but I have such restlessness and A.D.D. that it kills me to think I have to spend a day in a chair, when I could otherwise be spending it roaming quiet Parisian streets.
• Post-work, sprint to event / drinks / dinner. Inevitably show up late. Friends annoyed, because they won’t give you a table in New York until all party members arrive. Friends even more annoyed when I accidentally double air kiss them.
• Then stay out too late.
• Then go to bed, way too late. 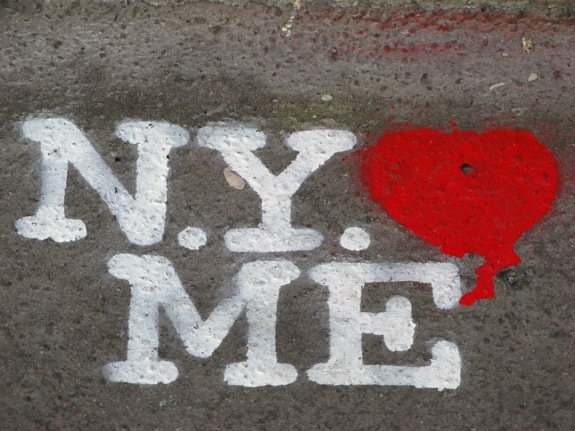 • Go wandering. On my last trip, I loved heading south from Belleville, crossing the Canal St. Martin, and conveniently finding myself at Du Pain et Des Idées, one of Paris’ best rustic boulangeries.
• Decadent pain au chocolat in hand, I begin my loitering for the day by lounging on the edge of the canal.
• Get restless, so wander through the Marais, stopping at Cafeotheque for a café du jour, before strolling across the Pont Louis-Philippe to the Ile St. Louis, where I install myself at the western tip of the island and gaze off into space for a while.
• When restless again, meander to the Left Bank, stopping to take in the Institut du Monde Arabe, and then strolling over to my old neighborhood, where I stop in at the market at Place Monge and the traiteurs along rue Mouffetard. One shop owner still refers to me as “la plus belle” whenever I see him (I’m always up for some good French-style ego-stroking).
• Inevitably end up lounging by the Fontaine des Médicis, stopping in for macarons at Pierre Hermé, poking around Repetto, and making a pit-stop at Deyrolle (to fuel my inexplicable taxidermy obsession).
• Before you know it, it’s time for an apéro. Convene with friends at Le Baron Rouge for wine. Everyone will be late; no one will care.


• Perhaps pop into a low-key vernissage in the Marais or in Montmartre.
• Dinner is unplanned. We might head to Le Verre Volé, or Robert et Louise, or whatever café will have us.
• Then maybe drinks, which often inspire impromptu dance parties. Spontaneous karaoke happens more often than seems logical.
• Time has gotten away from us… the bars are closing and the Eiffel Tower’s lights are off, and we are wandering along the quais, or through the quiet streets of the Marais.
• The metro’s closed. No cabs. Don’t know how we’re getting home. Maybe hop on a Vélib, or just wander.
• Eventually go to bed. No idea what time it is. Don’t care. 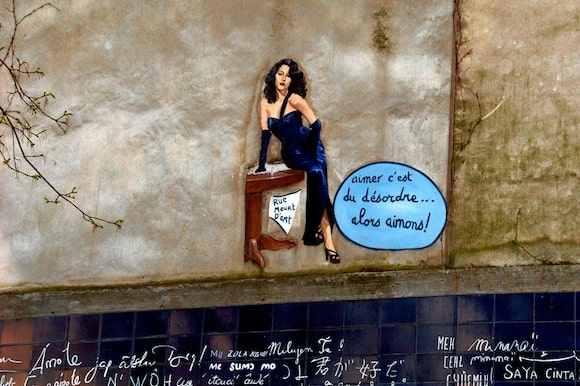 If you were me, would you live in Paris or New York?

Text by Tory Hoen for the Hip Paris blog. Looking for a fabulous vacation rental in Paris, Provence, or Tuscany? Check out Haven in Paris.

Janelle Mentesana was born and raised in Australia. She lives and works in Paris as an illustrator, and she enjoys taking pictures of people outside her window with baguettes in their hands. Lisa Weatherbee is a New York based photographer and designer, currently eating and shooting her way through Paris. Dave Bloom is a tepid consultant and aspiring expatriate; born in the Midwest and working his way east via DC, hoping to join us in Paris for grad school.

The only similarity between these two cities are the shared desire that many expats on both sides have for theirs lives either here or there.

I have spent seven years in New York City which says all too little about my day to day because what really deciphers your daily lifestyle is which borough you inhabit. In Williamsburg Brooklyn I slept late, ate lots of Bagels on Bedford Ave and drank the infamous shot/beer combo at every local. While living in the west village it was all about coffee trucks, bodegas and street meat during the day. You know walking to Starbucks not to drink coffee but to use their bathroom and snake their wifi. Nights in Manhattan are more high brow with the exception if some downtown and uptown activity. In queens, well this was another life.

Now Paris is either on or off. You may lose your sense of time but heed the warning that France closes early and shuts its shops for virtually every holiday. The lifestyle is more laid back, people are quite nice actually but social etiquette on the metro is out the window! Food is exceptional, intellect seems to be more of a cultural pride than NYC and traditions are highly honored.

I live here in Paris for an open ended amount of time and it’s been about 8 months already. Both cities are hated and loved for similar reasons. Bon courage to who is reading and considering jumping on either side of the great Atlantic puddle.

I am planning my first trip to Paris for my 60th birthday – I hope to have 10 days in France…5 or 6 of them in Paris – please email me your thoughts on how I can feel Paris and enjoy as much of what there is in such a short time – it has been my dream forever to go there.

I feel the same way “Sweet Freak” does.

Life in New York was full, true; but it was easy in so many ways. And meaningful.
Paris is beautiful, and Parisians are usually nice once you get to know them. But it is also filled with tension (racial & economic), homeless people can be found in every neighborhood. And this is the City of Depression before it is the City of Lights. When you were in Paris, did you notice that there are “pharmacies” every couple of blocks, here?

Paris, no question! I love your comparison…and yes, the French know how to live!

Well, yesterday was June 19th and my flight from Paris landed home in Montreal. But, yes, home is where the heart is and mine, like yours, is in Paris. I have bookmarked your post and will re-read your Paris day often. 🙂

Hi Cheryl. Thanks for your comment! I’ve spent a lot of time in Montreal too (my parents live there), and it’s an awesome city. Though I always get a good laugh when people call it the “Paris of the Northeast.” There’s only one Paris for me, and that’s… Paris. Tory

I dream of Paris every hour of everyday. There is nowhere on earth you can be more alive and experience joie d’vivre every minute. Keep the image alive until all of us can return.

Paris … in a heartbeat. Parisians have mastered the art of living.

What is it about Paris?? There are times when I ache to be there.

You don’t say! I am wrestling with the same debate (http://godiloveparis.blogspot.com/2010/06/daily-poll-new-york-or-paris.html).

The difference is, while you’re back in NYC, I am in Paris, missing New York like crazy. I haven’t been back since Thanksgiving. And as much as I love pain aux raisins and rue Mouffetard and my beloved Velibs, I miss cornflake-marshmallow-chocolate chip cookies, the Union Street Greenmarket and jumping in a taxi, any time, anywhere, at any hour.

Tory, there is no right answer. We are lucky girls being where we are. But just to maybe make you feel a wee bit better, I leave you with these three things:
• It is June 18 and I am still wearing jackets and scarves.
• Nobody ever responds to email – even HR, when I’m asking about the status of my contract or Carte de Sejour. Laissez-faire is great when you want to wile the day away at the riverbank but insanely frustrating when you’re trying to accomplish something.
• For every warm smile I get from a stranger, I endure two dozen body blocks.

So much fun to read and an immense wake up call to enjoy my time here before I head back…thanks.