The Beef Club: High-Brow Burgers and Clever Cocktails in Paris

Fresh off the heels of their successes in Paris, London and now New York, the Experimental Cocktail Crew makes its culinary debut in Paris (where else?) with the Beef Club. If you stop by, let us know what you think in the comments!  -Geneviève 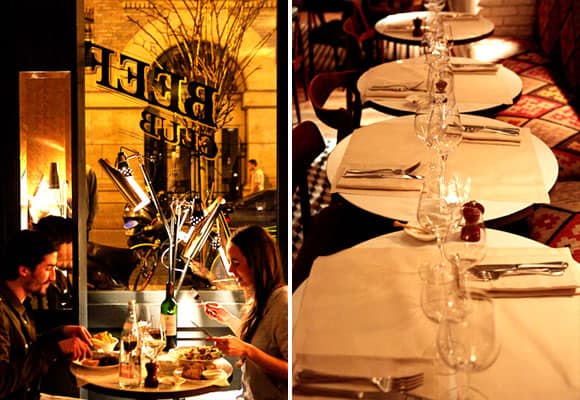 Just a few steps from one of Paris’s least charming spots (Les Halles) has suddenly appeared one of its most charming. Le Ballroom du Beef Club, the month-old clandestine cocktail den from the team behind the popular hideaways Experimental Cocktail Club, Curio Parlor and Prescription Cocktail Club, leaves no doubt that Paris has arrived as a serious mixology destination. In the space of just a few years, the scene here has evolved from an experimental “cult” to a full-blown cocktail culture—largely thanks to Olivier Bon, Pierre-Charles Cros, and Romée de Goriainoff, the handsome young triumvirate behind the quickly expanding Experimental empire (they have a spot in London and will open their first New York outpost later this month). 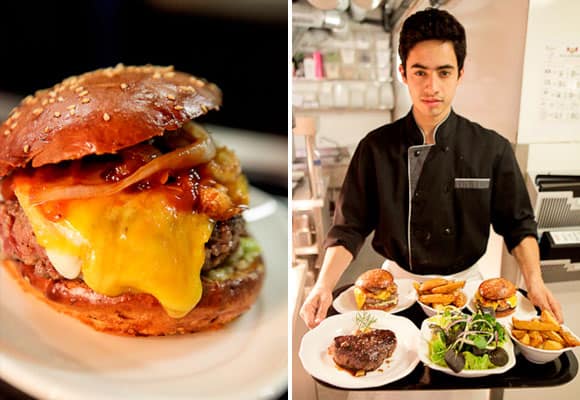 This time around, the team has upped the ante. Upstairs, The Beef Club is a stylish steak house (we can’t wait to settle into one of those mid-century modern chairs for a night of carnivorous hedonism), and downstairs, the cavernous Ballroom du Beef Club offers a sensationally sexy setting where you can slip in for an after-work drink or linger into the wee hours of the night. 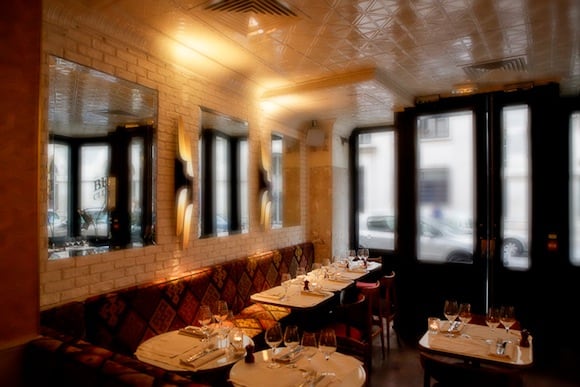 By 9pm on a Wednesday, multiple groups had already discreetly tucked themselves into the bar’s various dark nooks, and at around 10pm each night, the bar’s second lounge space opens to accommodate the larger late-night crowd. 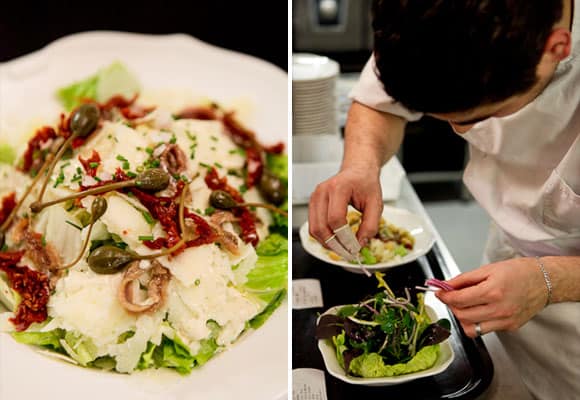 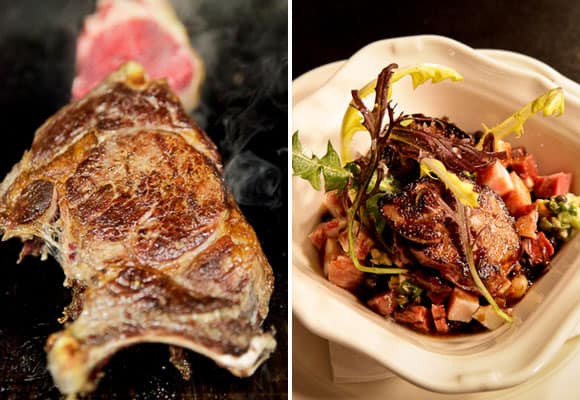 But in addition to providing a place where many a make-out session will inevitably go down, this is a sophisticated spot where both cocktail connoisseurs and the uninitiated can come to experience the work of skilled bartenders, who can improvise based on a client’s tastes and curiosities. 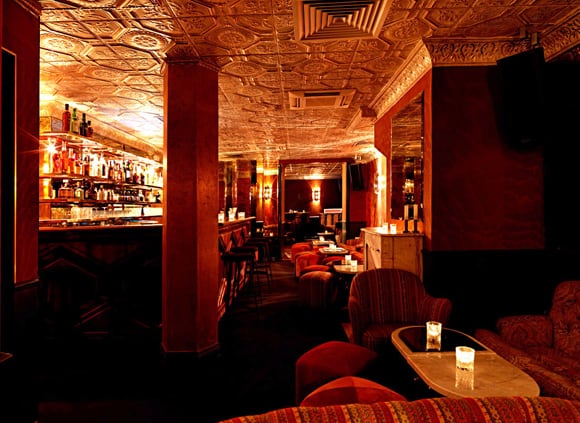 When we went, we sat at the bar and observed veteran mixologist Inko, whose roguish charm is trumped only by his skill behind the bar (he previously worked at Experimental Cocktail Club China Town in London). His first trick was an off-menu concoction called “Le Temps de Cerises” that he had learned from a former ECC colleague. (It’s this institutional knowledge that has set apart the Experimental bars over the years—members of the team often work at more than one spot, sharing recipes and continually taking the art of cocktails to the next sublime level). A combination of sherry, Peychaud’s bitters, cognac, grapefruit juice, and house-made almond syrup, this drink was smooth and refined, with a perfect balance of flavors and a subtle snap of citrus. 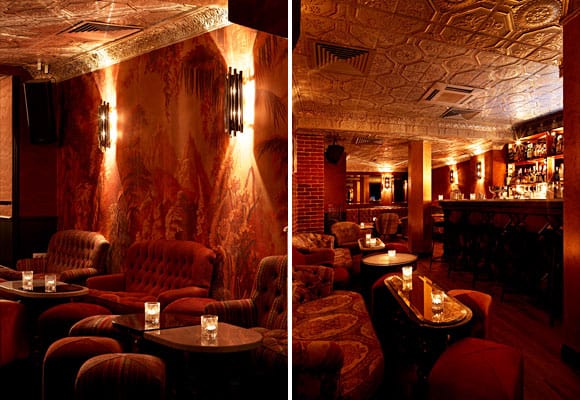 We were also intrigued by the Ballroom’s modern twists on classic cocktails. The julep contained 12-year-old El Dorado rum, Amaro liqueur and fresh mint, and it was a bit bolder than a typical bourbon-based julep—dry rather than sweet, with a bitter finish and strong hit of mint. The Pondicherry Mule seamlessly blended cardamom-infused vodka, Angostura bitters, ginger beer and lime juice, topped off star anise. 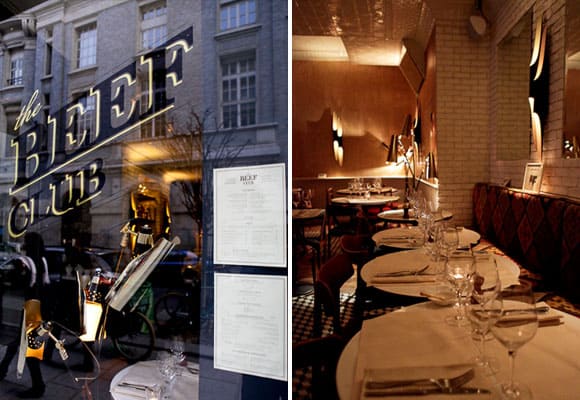 During our visit, co-founder Olivier Bon stopped by the bar, where Inko offered him a strawful of whatever he was concocting, like a mother bird feeding its young—assuming its young has a penchant for booze. Olivier explained that he and his partners have always tried to create havens where cocktail-cravers can enjoy sophisticated drinks in cool-but-relaxed settings, where service is friendly and the vibe is open and international.

He’s certainly achieved his goal with the Ballroom du Beef Club, and as soon as we save up a few more centimes (cocktails are 12-15€ a pop) we will definitely be back for more.

Written by Tory Hoen for the HiP Paris Blog. Didier Gauducheau, photographe, 06 03 54 39 73. Looking for a fabulous vacation rental in Paris, London, Provence, or Tuscany? Check out Haven in Paris.

6 comments on “The Beef Club: High-Brow Burgers and Clever Cocktails in Paris”

Eamonn – We absolutely agree! It is fabulous.

I spend most of my life in an apartment in the 4th arr – although my home is on the Cote d’Azur. (Have to work and earn my Euros 🙁 )
The beef is the best in Paris. Thanks to Yves-Marie and Tim Wilson’s farms in Yorkshire UK. This is the only resto in France supplied by Tim at Ginger Pig Farms.
I am going to Yves-Marie’s boucherie in ave Victor Hugo next week to take some beef home and for friends and one local resto which wants to give it a try.
The Beef Club menu is not cheap, but well priced for the quality I think.
I have read comments that service is slow. Mine has not been so far and the dining room has been completely full on each occasion. A full dining room of hungry folk who all arrive at much the same time is always a challenge!
Go, eat, enjoy and tell your friends that grass fed properly matured beef is so much better than bulk bred, grain fed “so fresh it’s mooing” beef.
Oh – and it is definitley not just a boys den!

Lynn — Agree that the speakeasy trend can feel a little lame at this point, but in this case, I think they’ve done it just right. And yes, Carla, the steaks here are definitely guy-pleasers!

Wow, this looks like a place the boys would love.. Burgers and steaks in a chic decor.. love it. Carla

Maybe I haven’t lived in Paris long enough to crave cocktails over great wine, especially at 3 times the price. I came from a city in the US where mixology has been a pretentious, played-out trend for a while. If you’ve seen this hysterical video you’ll see what I mean… http://www.youtube.com/watch?v=EB2aVzmPxxM I wish these guys success because it looks like they have created a winning formula and while I’m not necessarily interested in cocktails (yet), it’s always nice to have different options available in every city.

This looks so wonderful!