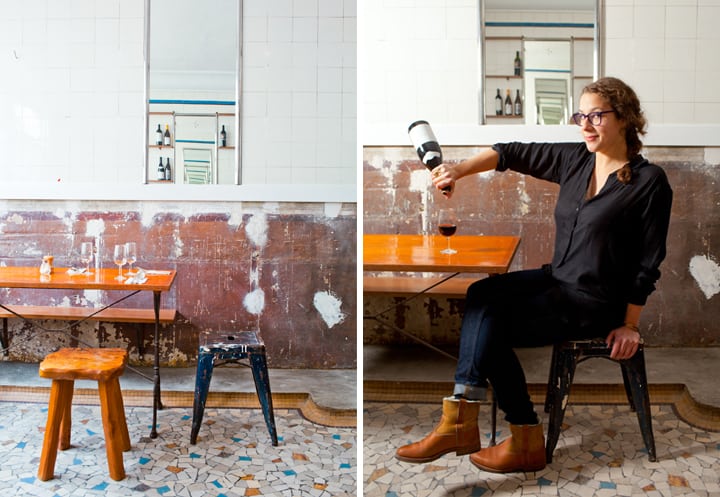 As I very much enjoy drinking natural wines in London, I thought I would probably enjoy drinking them even more in France. So my thinking went when planning my trip to Paris last month. I can’t remember where I first heard about La Buvette, but it was on my list of natural wine places and also on my list of places that have been opened by ex-staff of Le Chateaubriand or Le Dauphin, where the owner of La Buvette, Camille Fourmont used to work.

That part of rue Saint-Maur is uninhabited enough at night that, as I stopped outside La Buvette to take a photo of the neon lit sign spelling out its name before going inside, my friend E coming up behind me and saying hello made me jump and let out a small shriek. 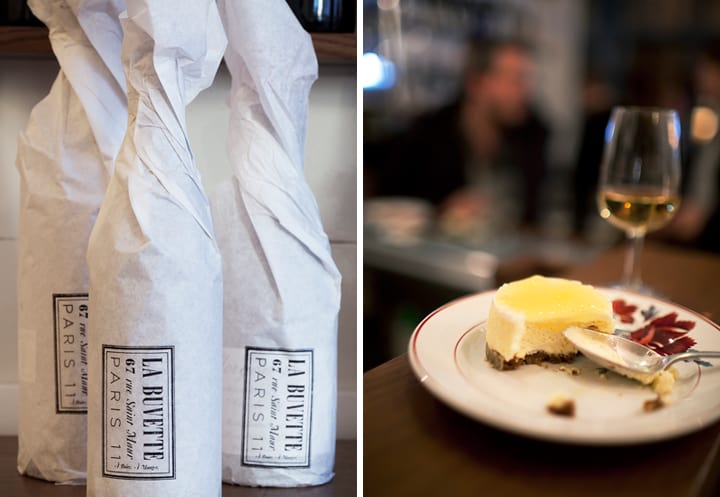 It’s actually not that far from Parmentier metro, but it seems so when you’re walking up the street in the dark, not knowing where it’s going to be. E, who knows the area well (and shares a surname with the owner Camille Fourmont – but is no relation as far as we could all discern) said she thought Camille was forging interesting new territory by opening there. 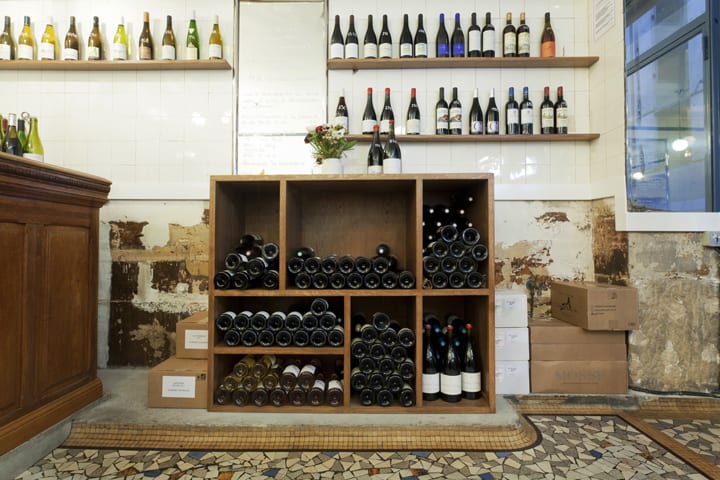 Once inside, it was pleasantly refreshing to be in a wine related space that had clearly been put together by a cool girl, rather than a man. Not that it’s girly. It wasn’t dark and there were no ancient dusty bottles gathering mold as décor. Instead, the white tiled walls with shallow wooden shelves held bottles of mostly natural wines, with the prices clearly written on them (add €8 for corkage). There were vintage glass light fixtures, each one slightly different, and a pot containing a fresh arrangement of white flowers and eucalyptus. The whole effect was light, unfussy and modern. 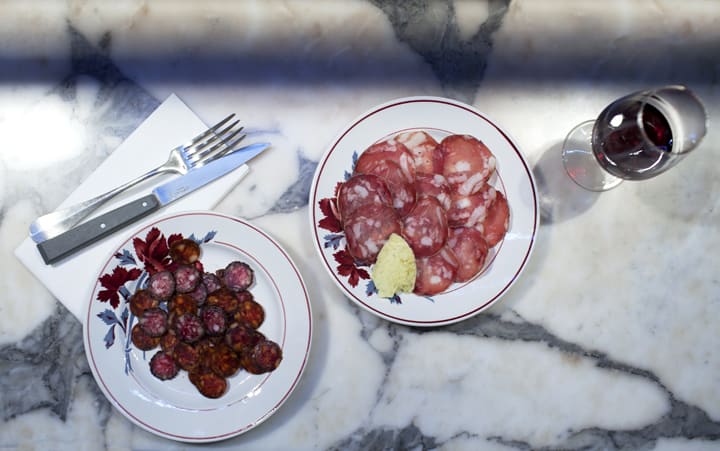 The menu of small plates was written up on a mirror, with prices ranging from €3 – €6 for a plate of olives or fourme d’Ambert cheese, saucisse seche, haricots blancs, or ricotta with quince jam and hazelnut oil. We had most of the dishes that were available and I was still hungry afterwards, but this isn’t a restaurant, so it was probably my own fault for trying to turn it into dinner. Due to licensing / lease restrictions it’s not allowed to be called a wine bar – it’s officially a wine shop where you can try the wine. The small space seats exactly fifteen and there’s also a zinc bar to lean on. It was full to capacity but not crowded on a cold Friday night in February. 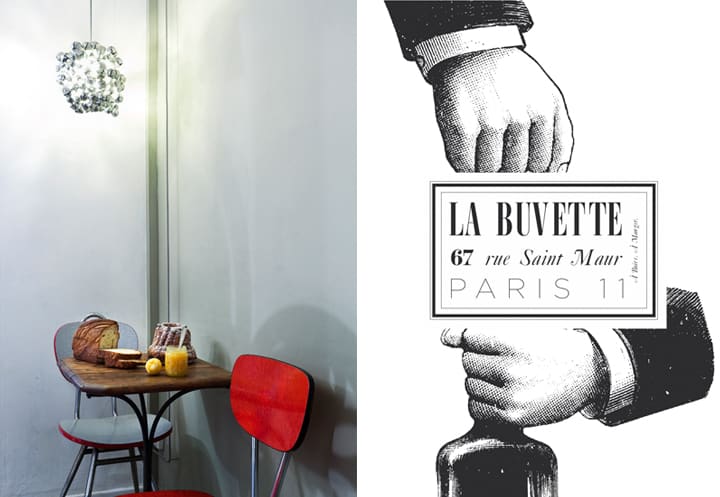 We were interested in the already opened bottles by the bar and we let Camille guide us in our choices, which she did charmingly. This allowed us to try a glass of a few different wines each without committing to a bottle. I’m no wine critic so I’ll spare you my amateur musings, but every glass we tried was excellent, and seemed to complement the previous – whether by accident or design. Before we knew it, it was 10pm – La Buvette has an early closing time, making it perfect for an aperitif, less as the focal point of your night out. 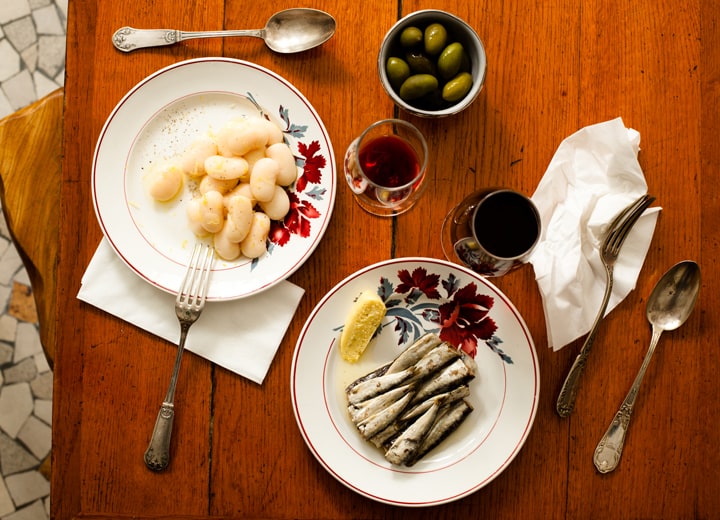 I enjoyed La Buvette for its thoughtful details: the glass light shades, the ’30s plates, the simple fresh flowers, the light touch with which it’s been conceived, as much as for the wines. It was my favorite of all the wine bars I went to in Paris in the month of February –and I went to many. 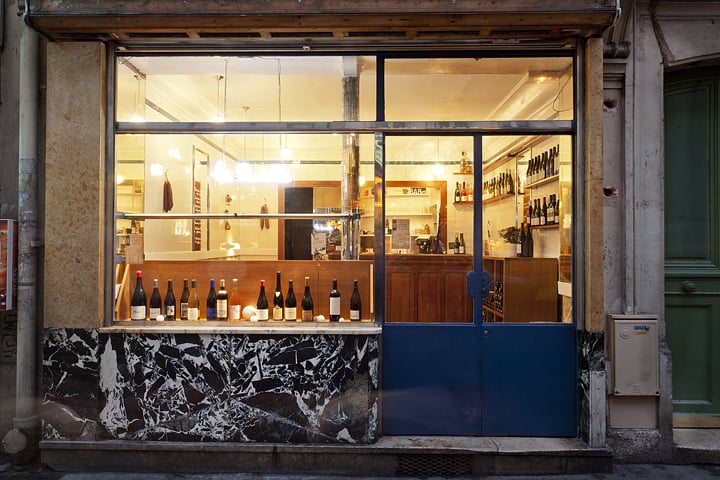 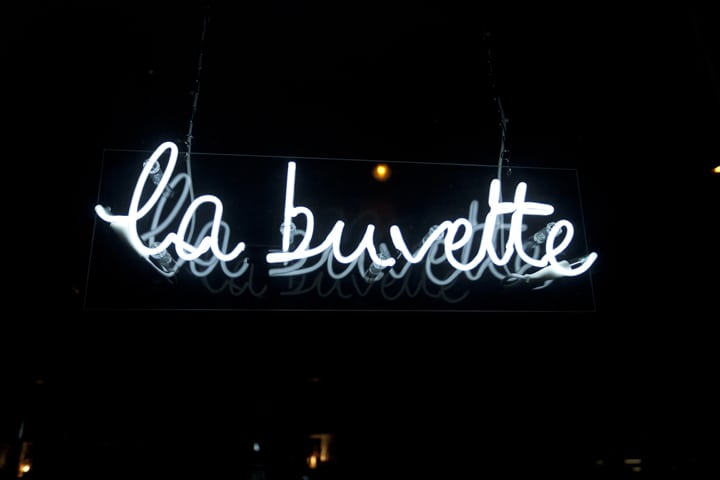 Written by Claire Oldman for the HiP Paris Blog. All photos by Antonin Borgeaud. Looking for a fabulous vacation rental in Paris, London, Provence, or Tuscany? Check out Haven in Paris.

The place looks so cosy! Thanks for your post. I’m looking forward to visit La Buvette

La Buvette is exactly the kind of place I would go to – nice recommendation!

There is a great place called Buvette in the West Village NYC at 42 Grove and from what I hear will be in Paris as well. Very cute here. ilovebuvette.com check it out if you ‘ll be visiting NYC.

This looks so adorable! I hadn’t even heard of La Buvette (oops!) so thanks for this article – I look forward to trying it out soon. -Kim

This is close (enough) to where we are staying (next week) for a quick weekend visit… sounds like a perfect way to start the evening.