An Interview with Kristen Beddard, Author of Bonjour Kale 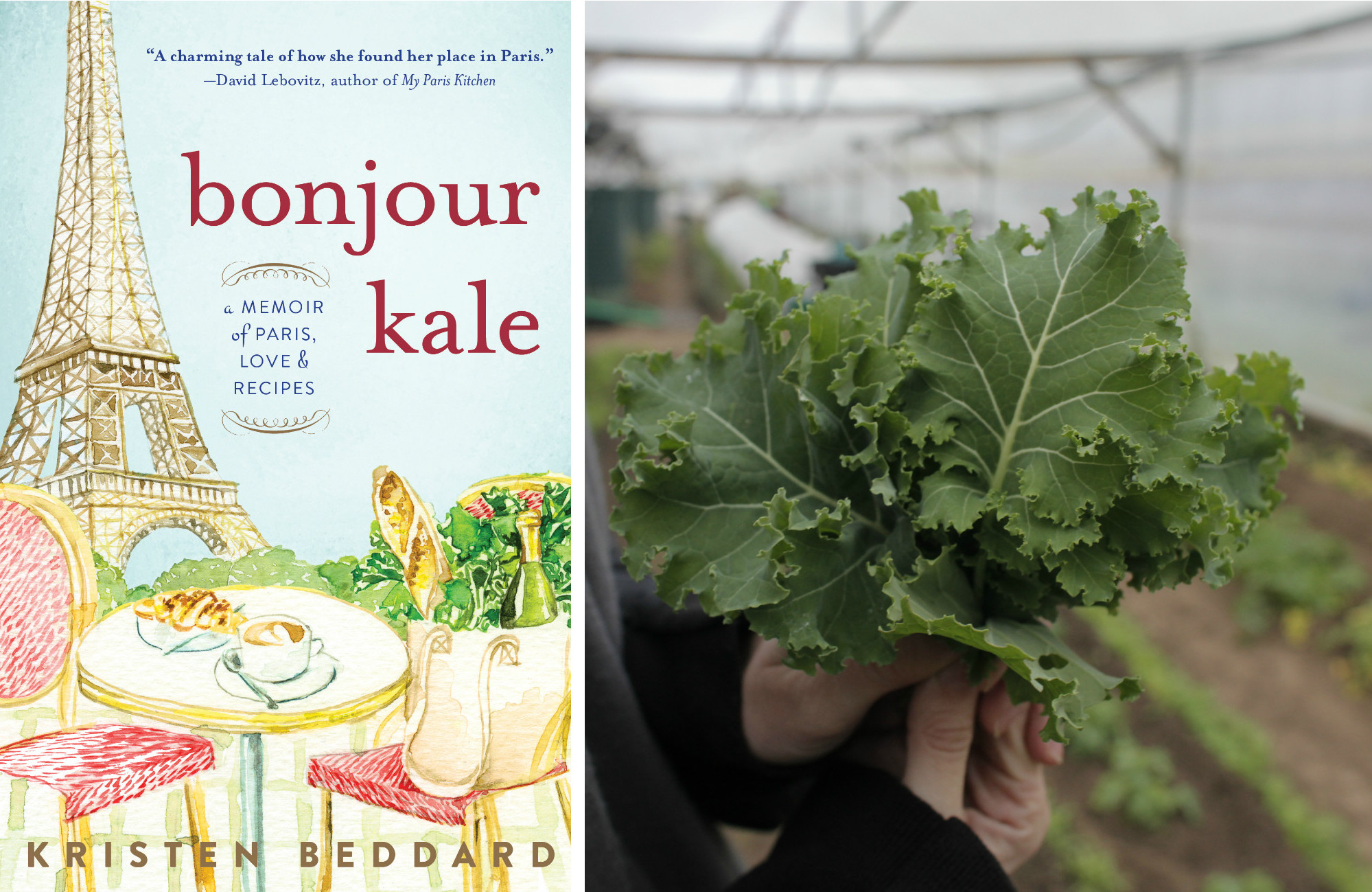 When Kristen Beddard moved to Paris five years ago, it wasn’t to fulfill a childhood dream of living in the French capital, or with the hopes of falling in love in the land of éclairs and socially acceptable daytime drinking. It wasn’t because her career, which was beginning to take off at a New York advertising agency, had brought her there, and it wasn’t because she had decided to explore Europe as some recent college graduates often do. Kristen’s Paris story doesn’t start as intentionally as any of those scenarios; it starts with the somewhat unexpected transfer of her husband to a city she barely knew with a language she didn’t speak.

While Kristen’s story begins with struggles – learning enough French to go grocery shopping, making new friends after leaving perfectly good ones behind, struggling to find a job as a foreigner in a new city – what she did with her time in Paris is truly a story of success. After several frustrating attempts – and failures – to find kale in Paris markets and supermarchés Kristen launched The Kale Project, a blog that documented her endeavors to find kale in her new home, and her subsequent quest to reintroduce the forgotten vegetable to the French. Five years later, The Kale Project has thousands of supporters and has also been featured in The New York Times. But the true testament to Kristen’s hard work is that kale can now commonly be found at markets and health food stores in Paris and the rest of France. Bonjour Kale, Kristen’s memoir of Paris, love, and recipes, tells her story of finding a home in Paris, sharing her love for her favorite leafy green, and all the surprises that the life of an expat brings. 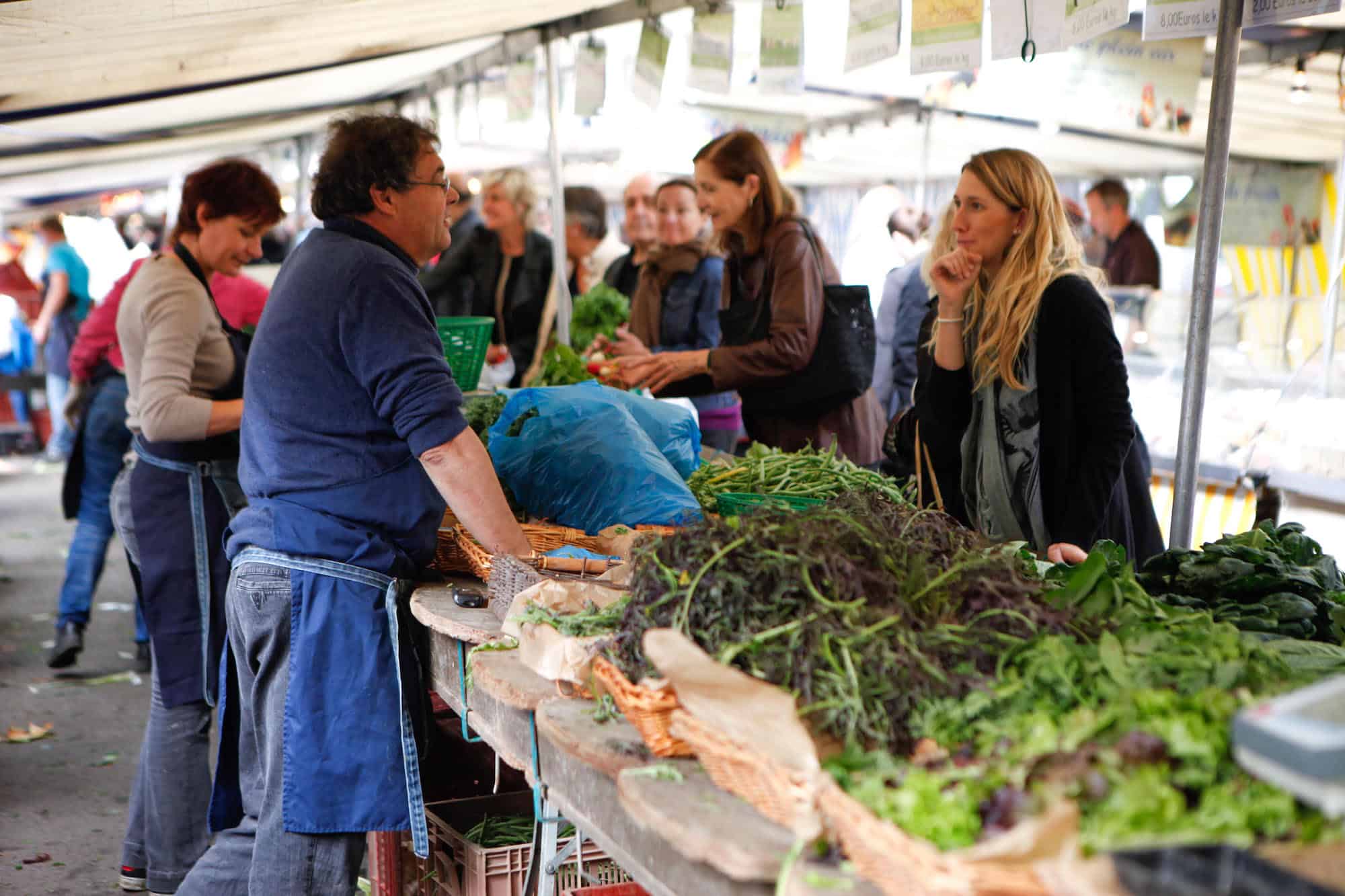 In the time since starting The Kale Project, Kristen has seen many changes in the way Paris has embraced veggies of all kinds and vegetarian living in general. I met up with the author to talk about her favorite Paris spots for healthy eating and seasonal shopping, as well as how the city was an inspiration to her when writing Bonjour Kale.

Emily Dilling: You’ve been in Paris for five years now, and you’ve seen the city go from being kale-free to being the home of juice bars, vegetarian restaurants, and kale salads. Can you talk a little bit about what it’s like to witness this change and the origin of Paris’ shift to embracing fresh veggies?

Kristen Beddard: The change has been fascinating because when we [Kristen and her husband, Philip] first arrived, there was such a space for vegetable-centric establishments to open and thrive… Kale was reintroduced right at the same time, it really was a perfect moment. And to be completely honest, if I had not started The Kale Project, I know that at some point someone or some bigger chain restaurant would have found a way to get kale grown in France. It’s also the younger chefs in the neo-bistrots who are cooking with légumes oubliés again and giving vegetables a more prominent place on the plate. I think that with the Internet and the constant photographing and sharing of food on social media, people are more aware of what’s happening across the world and what people are cooking and eating, whether it’s avocado toast or the cronut. With that and the influence of celebrity, Paris was primed to integrate the “green” and “healthy” movement that had taken the US by hold a few years earlier.

What’s exciting is that while the city has become more vegetable friendly, these places and their offerings still hold a sense of French tradition. “Healthy” has been integrated nicely. 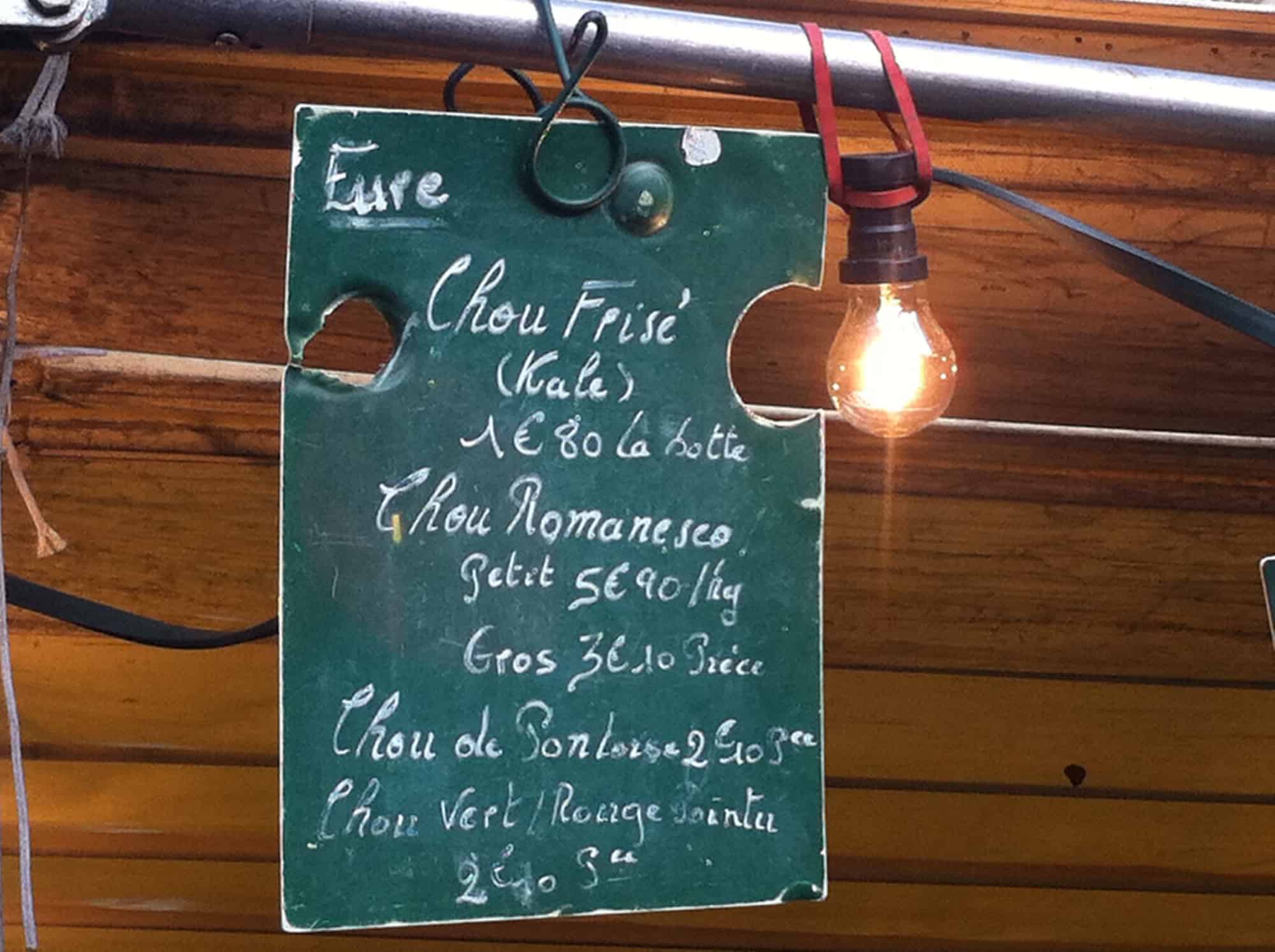 ED: What are some of your favorite Paris addresses to enjoy healthy, seasonal meals?

KB: The Broken Arm is hands down my favorite place for lunch. Their chef, Linda Granebring, changes the menu all the time and uses really unique combinations of ingredients – always paying homage to the seasons – that not only taste delicious, but are beautiful too. The menu is not vegetarian, but there is always a nice salad and soup included. Another really nice spot for a veggie-centric lunch is Merci Cantine, the basement restaurant of the concept store. They make a variety of different salads and it’s possible to order a plate of all of them.

ED: When it comes to food shopping and stocking your kitchen, where do you like to buy ingredients?

KB: I go to the outdoor markets for my produce and tend to frequent Marché Batignolles and Marché President Wilson, mainly because they are not too far from where we live in the 17th, but also because there are at least a few local producers. And like most Parisians, I have my favorite neighborhood butcher, cheesemonger, fishmonger, and boulangerie. I find so much pleasure in the time it takes to run errands here. Every purchase is much more thought out.

ED: One of my favorite characters in Bonjour Kale is Madame Mustard, a vendor at Marché Batignolles and Marché Raspail, who was one of the first farmers to grow kale locally. Can you talk a little bit about why she’s such an important part of your story?

KB: Madame Mustard, or Hermione Boehrer, was the first farmer to agree to grow kale for The Kale Project – a kale pioneer. She was someone who, without knowing me or my husband, took a chance to grow a lost and forgotten cabbage, thereby making Paris feel much more familiar to me. I still cherish the moments we shared when I went to visit her at her farm in Coulommiers.

ED: Paris is also a character in Bonjour Kale. Can you talk about how the city has been an influence, and sometimes obstacle, in your quest to reintroduce kale to France?

KB: The obstacles that I faced when we first arrived in Paris (not having a job and not speaking French) actually turned into the influence to start The Kale Project. What I felt were difficulties in the city made me want to try to find my niche and my place within it. 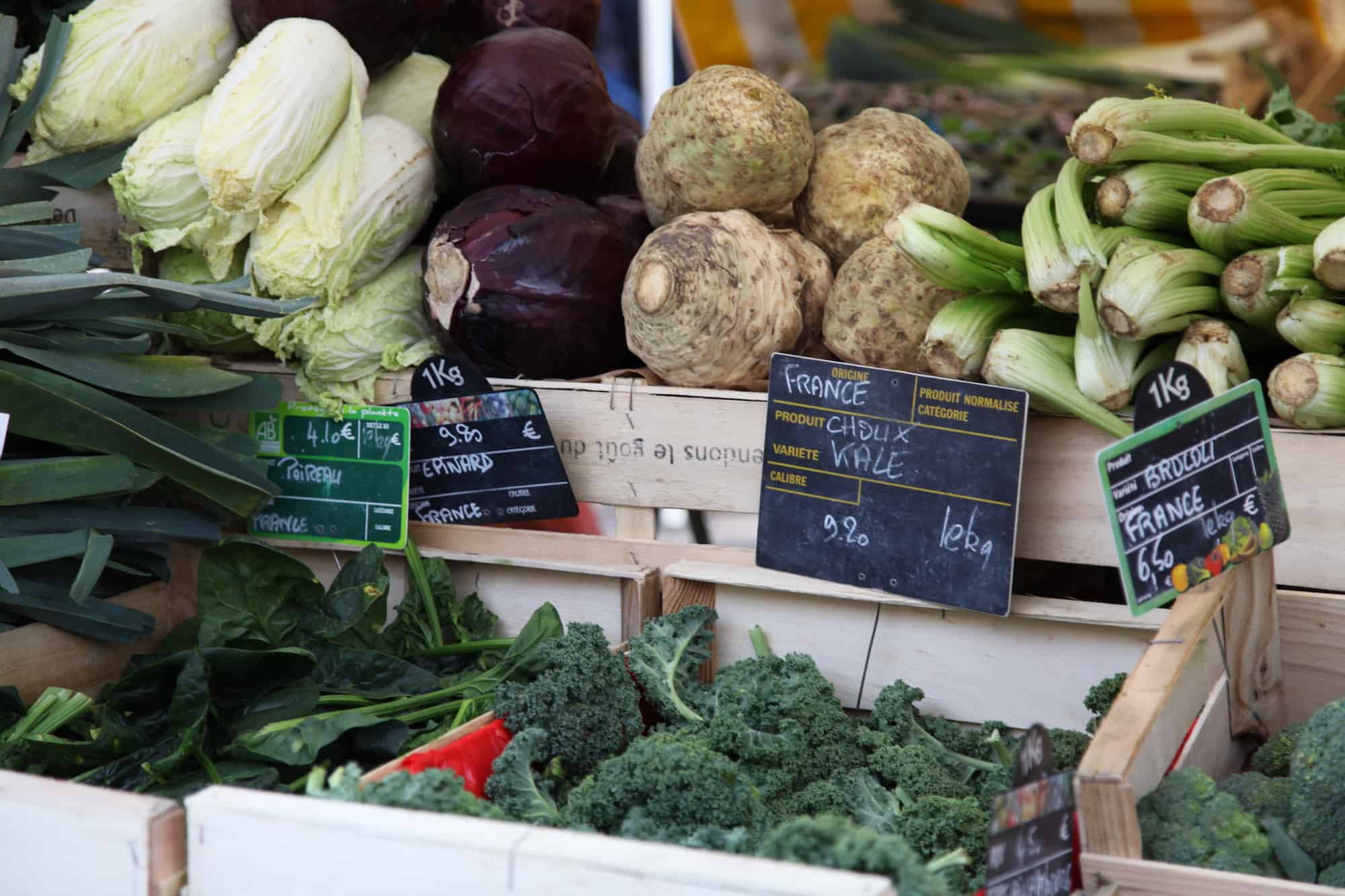 Written by Emily Dilling for the HiP Paris Blog. All photos by Kristen Beddard. Looking for a fabulous vacation rental in Paris, London, Provence or Tuscany? Check out Haven in Paris.