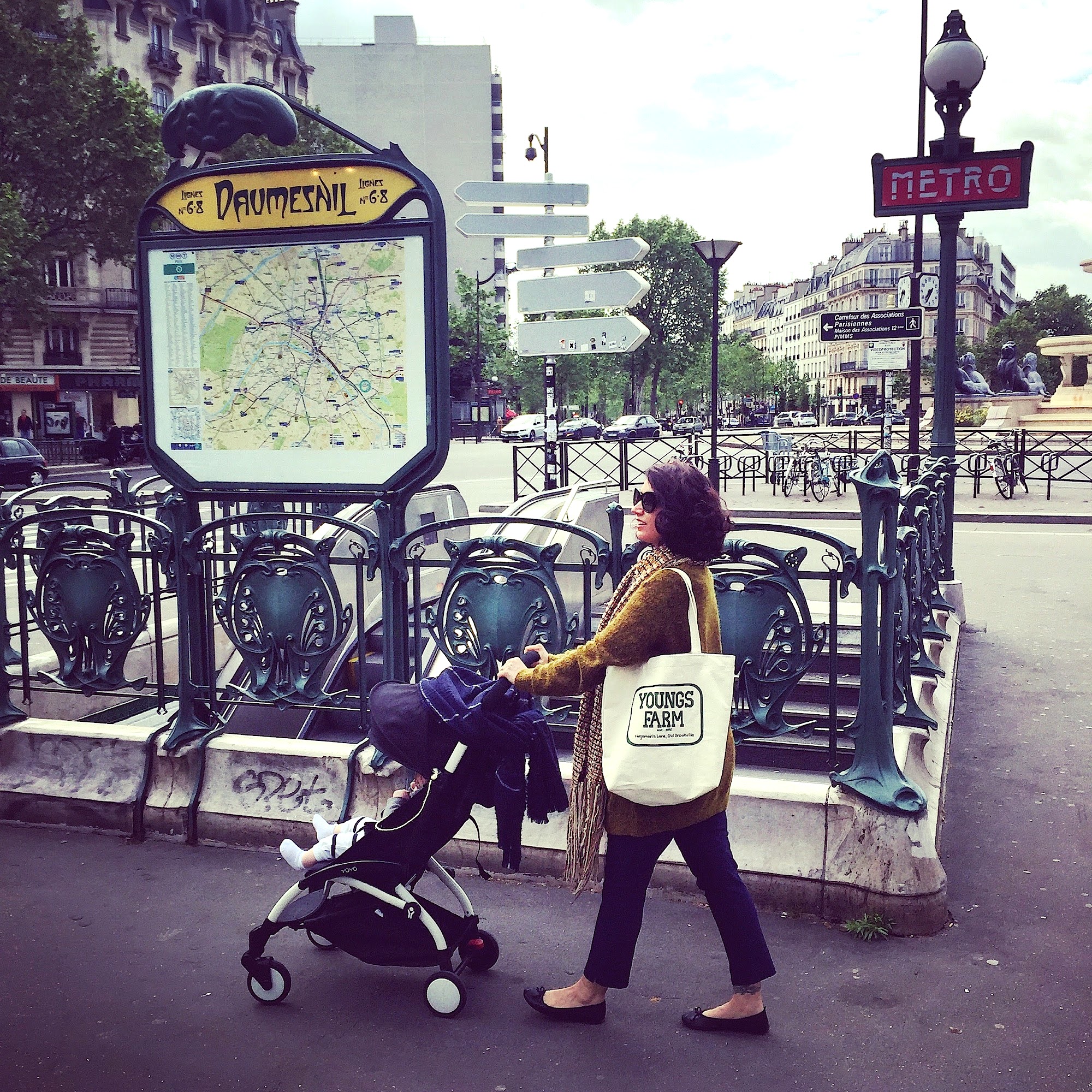 I came to Paris with a three-month plan: go, see… and take it from there. Lacking any foundation like the security of a job, contacts, a suitable apartment or having much money, this plan had all the makings of a disaster. But I had to go. At twenty-eight years old I had yet to experience The Great Paris you read about in legacy literature and hear mused about in film dialogue. I wanted to experience the city as a local and showed up on Paris’s doorstep naïve and hopeful. The three-month trial swelled into several years where Paris built me up and broke me back down, enchanted and embarrassed me, and led to the quietude of marriage to the now constant movement of motherhood. Paris has given me nine lives. Having been a tourist, a wanderer, an outcast, a local, an expat wife, and now, an expat mom, these layered experiences ironed out the jagged edges of living abroad. Good thing, because if being an expat felt like the ultimate exploration into the unknown, the birth of our son Georges made me discover Paris once again, this time through the eyes of a mother. 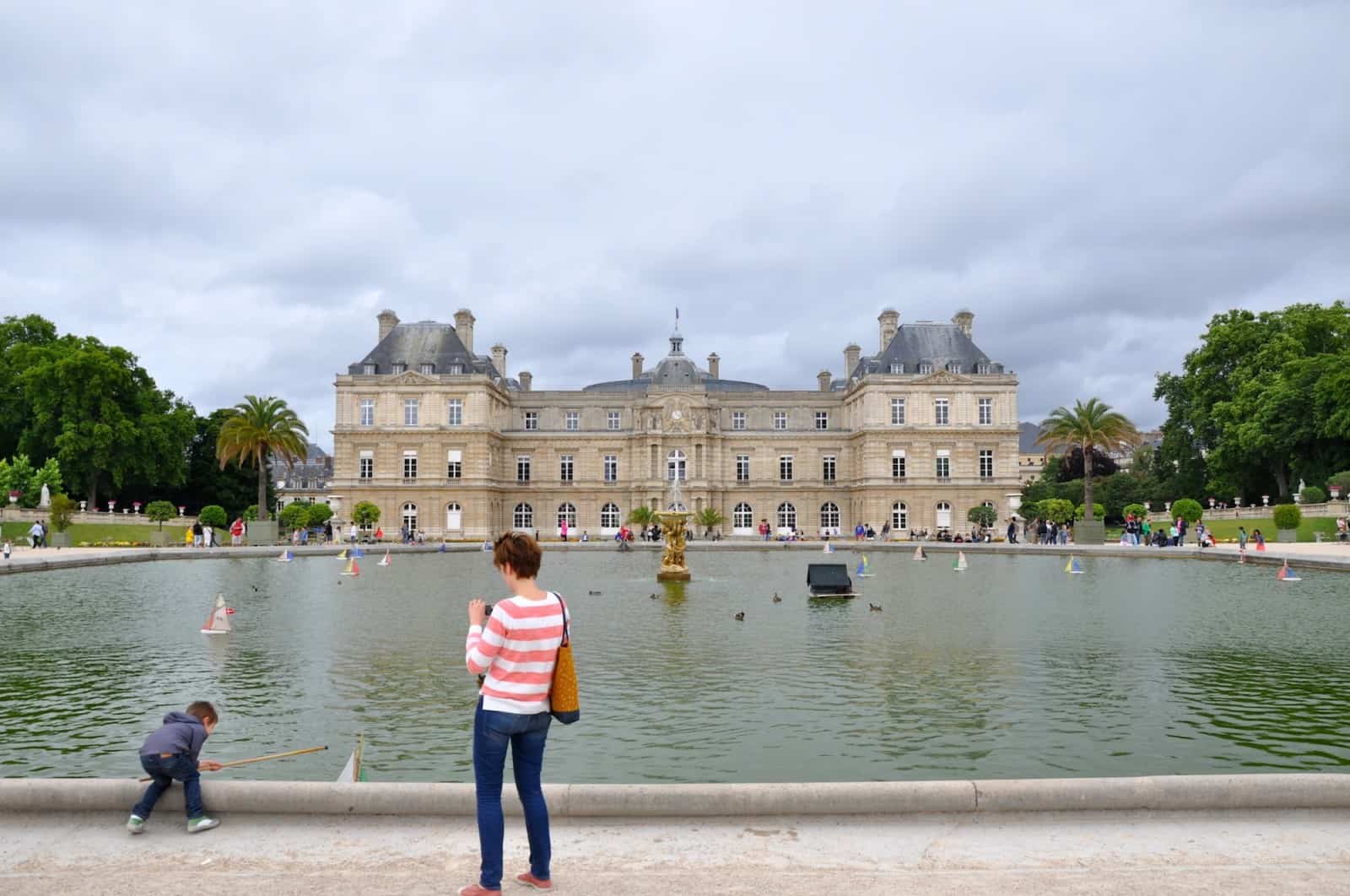 Being a new mom in Paris started off with some obvious changes. I had to learn the bus because our metro did not have an elevator. Something I once considered a perk in order to sneak in an extra few steps became a burden the last weeks of my pregnancy and first few months postpartum. Because picturing my first precious moments of motherhood did not include the imagery of me pulling myself up the stairs breathlessly and begrudgingly, while sounding like Marlon Brando in The Godfather. If my husband Aurélien and I dared to eat out, it was no longer which restaurant had herb-infused craft cocktails and photogenic décor but rather does the place have a high chair, and how quick can we eat before our kid notices we are in a restaurant? And then there was fashion. Ah, Paris, the soi-disant fashion capital of the world and for me leggings became the new wine and were (and are still) worn at the frequency I drank France’s beloved import. 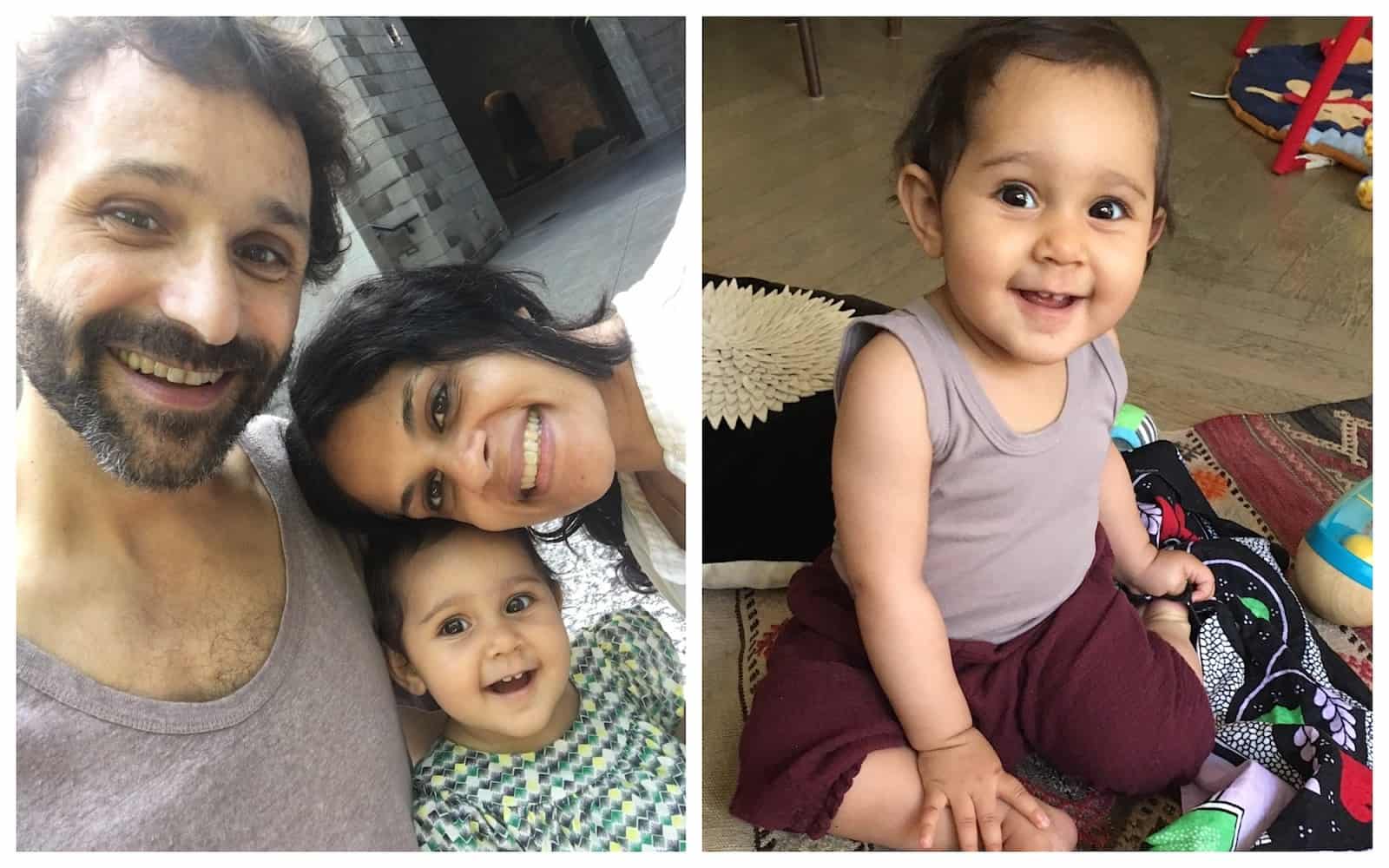 These changes were anticipated and even embraced, but as Georges grew, our one-bedroom apartment in the 12th shrunk; the walls closing in on us with each new toy he was gifted. Stepping on jouets that squeaked back in revolt or accidentally setting off the computerized dogs who bark “Ode to Joy”, our apartment was one pack n’ play away from being the set of a bad comedy about new parents. With space and storage being the antithesis of Paris, we moved to the small medieval painter’s village where Aurélien grew up. 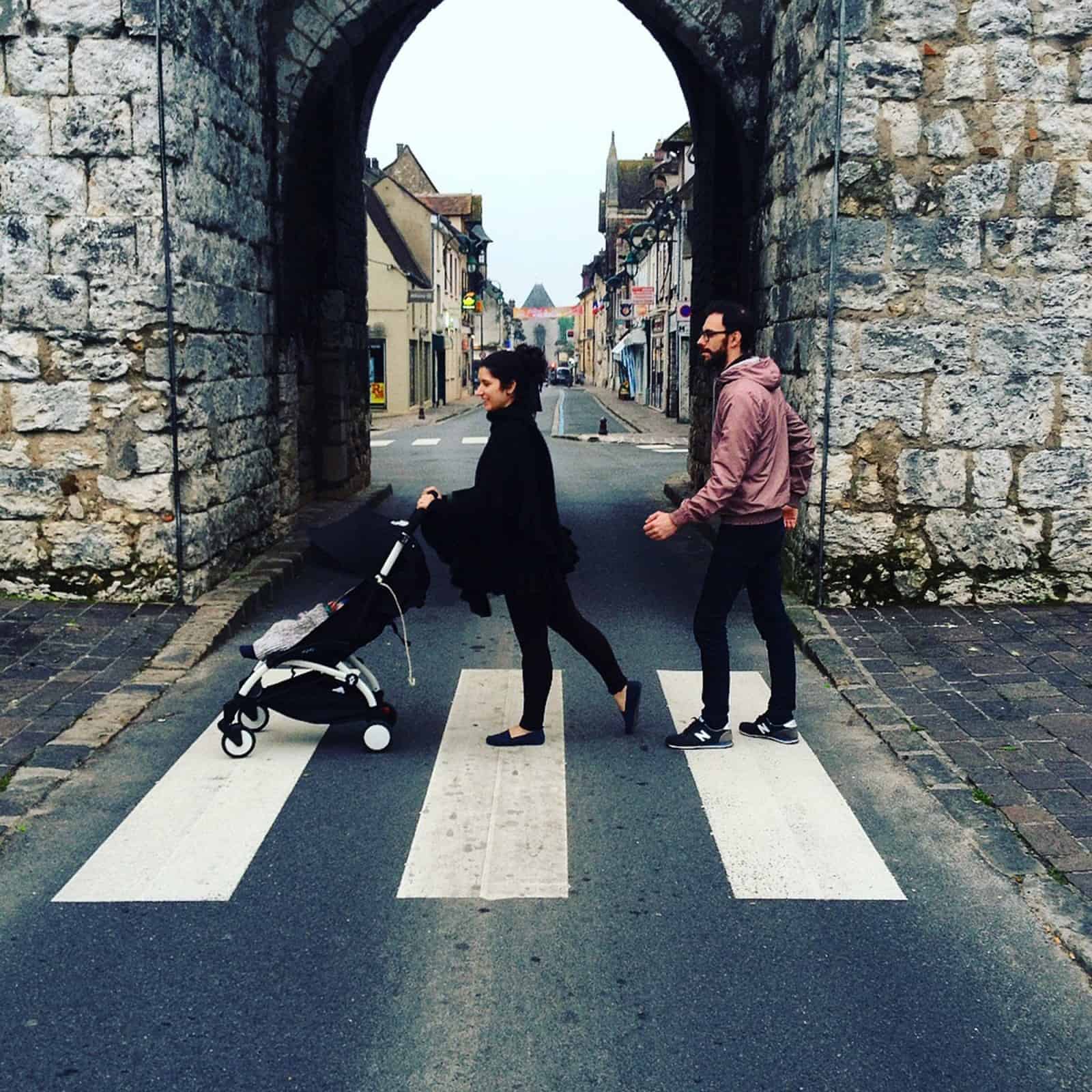 The village was only an hour away, but culturally it felt much farther. This move was my introduction to life outside of Paris. Forget whether the restaurants have high chairs, the question now is the restaurant even open? With the gastronomic choices limited to crêpes or crêpes, businesses operate on a sleepy town schedule where lazy Sundays stretch into Mondays, and the default expectation is that whatever you are looking for, don’t, because it’s closed. While the restaurant options may be restricted, let it be noted that we do have seven—seven! — hair salons. Our supermarket and pharmacies takes afternoon siestes, which I learned the hard way when I showed up in the pouring rain in need of feminine products. The winding cobblestone streets that make every photo look like I live in a Disney cartoon have their charm, just not when you are pushing thirty pounds of baby and carriage. Wearing my status as a newly minted mom in the country, I grunt in defeat each time the wheel gets caught in the crevice of the uneven stones. I can sometimes be seen carrying (while still grunting) the stroller across the more rugged streets. 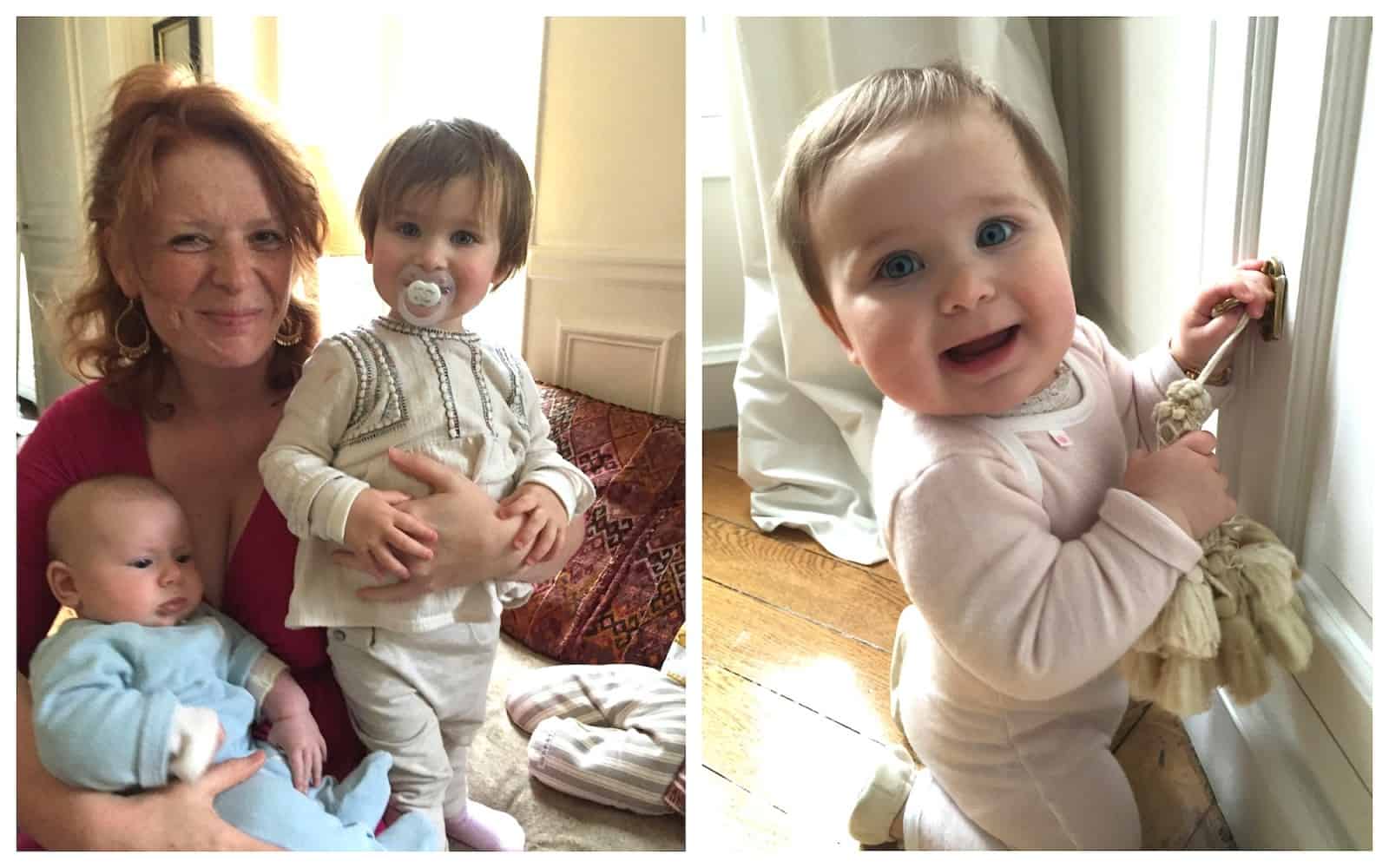 I was raised in New York and have lived in large cities like Los Angeles and Paris, and I’m often asked if I get bored living in such a small town. I don’t know what being bored feels like anymore; I haven’t been bored in almost two years, because, well, children. But also because I am absorbing another facet of French living, where residents raise chickens for eggs in the backyard; our town has a communal organic garden; and long walks through the Fontainebleau Forest are seeped in history back when the kings of France would come for the weekend from Versailles. To emphasize the fact that we are no longer in Paris, we arrived the week of France’s massive centennial flood. As we were unpacking boxes on our side of town, residents on the other were transporting their belongings like nightstands and garment racks in chipped rowboats to dry havens, while ducks swam alongside the roofs of parked cars. A more extreme introduction into rural living, we pulled up our rubber galoshes ready to start this next chapter. But this one, unlike my first years in Paris, will be written together. If Paris gave me nine lives, I can only wonder how many a French countryside will give me alongside my family to experience the laughs, the long days and cobblestones together.

Beautiful article! I feel your love along with your frustration
Being a mom is tough in your native country, I can’t imagine experiencing it in a foriegn one.

Beautiful article Lisa. Having lived in the south of France for over 5 years, and now Paris, I’m glad you will now have a different experience of French living! And some fresher air and bigger space for bébé! I love that little town, it is very charming. If you’re ever back in Paris hit me up.